This is not just a Stock Market, this is a “Market of Stocks”. And not just Stocks from America, but Stocks all over the world. Stocks don’t move up and down because of what is happening in New York or Washington DC. They move based on the supply and demand dynamics for the asset globally. To suggest otherwise is irresponsible.

Let’s look around the world, because it’s the right the thing to do. And let’s see how stocks look globally, rather than be narrow minded into thinking the world revolves around what happens within US borders.

If you’re in the camp that US Stocks are about to fall apart (I am not), then you also have to believe this is a massive failed breakout in London FTSE100:

For me, the higher probability outcome is that this is actually a breakout from a multi-decade base:

Canada hasn’t done anything since 2007. This is what it looks like to me. It’s hard not to expect new all-time highs very soon and the completion of this inverse head & shoulders continuation pattern. For me it’s less about what you call the pattern and more about what it means within the context of a longer-term trend. In my experience, these are the types of charts we want to be buying, not selling. If we’re above 16,700 in $TSX then sky’s the limit:

London FTSE is still trying to stay above its 2000 & 2007 highs (as you can see in the first chart above). But Europe has been making lower highs for 20 years. A little “catch-up” here is perfectly justified. Something tells me you “news” watchers don’t have positive things to say about European stocks. That’s a good thing:

Here is the Euro STOXX 600 and it reminds me of the London FTSE100. I like this one for a multi-decade breakout:

Germany the big one in Europe. This one might completely fall apart. But if I had to buy this chart 100 times out of 100, I would make a lot of money at the end. I still like this one higher if we’re above 11800. There’s a ton of upside here and it’s not like people are pounding the table to load up on European equities!

Look at France. Is this something we want to be betting against? I like this higher:

Where I come from, new all-time highs coming out of a 12-year base is not a characteristic of a downtrend. With Switzerland coming out of this huge range, should we not be optimistic about European equities?

Here is the Swiss ETF $EWL going out at new all-time highs. There are leadership qualities here:

New Zealand is just a classic example of Fibonacci extensions being helpful. Here we are making new all-time highs and getting through another key extension level. If we’re above 10,400 what is there to be bearish about?

Emerging Markets have been in a downtrend for what seems like forever. Is this a retest of the breakout above this downtrend from the 2007 highs? I think there’s a good shot. If we’re above $40 in $EEM we have to err on the long side of this space: 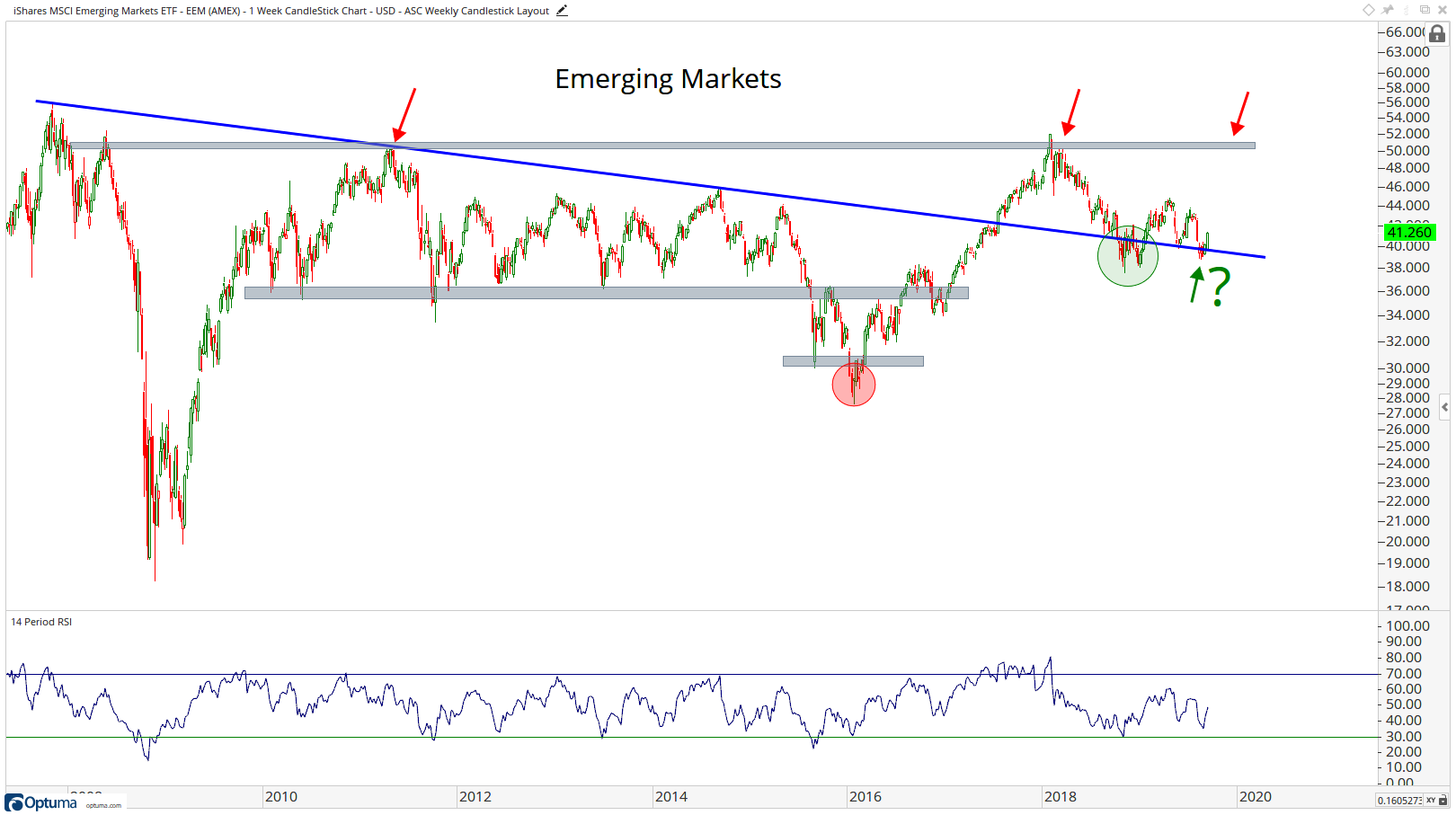 Look at South Korea putting in a bullish divergence on recent lows. The path of least resistance here looks higher to me:

With Taiwan flat for 22 years, it looks like its finally about time it gets going no? This would be a perfectly logical area for a new cyclical bull market to begin, not end:

Here is Brazil continuing to press up against new highs. If we’re above 100,000 in Bovespa, we need to err on higher prices:

Here is the Wilshire 5000. Does this look like a major top? Or a 20-month consolidation after a historic run throughout 2016-2017? I think it’s the latter and a breakout is coming soon. The last consolidation from 2014 to 2016 lasted just about as long:

And finally in the United States, this 20-month consolidation looks like it’s coming to an end soon. If you’ve ever felt Fibonacci levels didn’t matter, go ask anyone long the Dow since January 2018 how they feel? This consolidation comes at a perfectly logical area. We have a cluster of extensions that stem from both the 2000 high (blue lines) AND the 2007 high (black lines). A breakout through 26,700-27,000 could spark a new leg higher and I believe that is the higher probability outcome:

That’s how the world looks to me. Is there weakness? Sure, Sri Lanka looks terrible. But for worlds largest and most important markets, I don’t see what there is to be bearish about. I like stocks higher around the world.

Do I have it wrong? Tell me how you feel!