I don’t do this enough. Most times, I’ll put up what I think is an important chart, talk about the implications, and then finish up with some risk management. There are certain topics that we talk about a lot, like Gold vs Stocks and a few risk-on/risk-off ratios (i.e. $XLY vs $XLP), but some others are blogged about infrequently.

Looking through some recent posts, I thought that I would take this time to follow up on a few of my comments. Check it out:

I went on a rant about cutting the Transports some slack. They sold off a little and didn’t make new highs while the Dow Industrials were taking out former resistance levels. I explained that the 15% move higher in Oil had a lot to do with it so everyone should chill out.

Here is an alternative view of the trannies. This time, we’re looking at the ETF $IYT (iShares DJ Transportation Average Index Fund). We can see a well-defined downtrend channel that has retraced exactly 38.2% of the recent move higher off of those Thanksgiving lows. This is very normal, healthy action. That 38.2% Fibonacci level also represents the former neckline of a Head & Shoulders bottom. This former resistance (now support) adds to the already important $90 level. A break below that, and I don’t want any part of it. 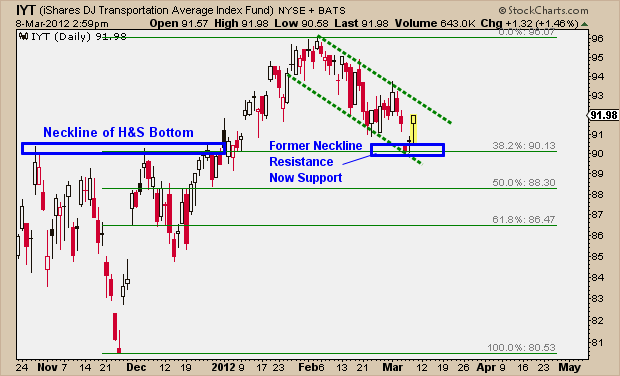 Nothing has changed over night obviously. But just wanted to reiterate that this is a very short-term trade. We are talking about the next quarter or two here for the banks. I think the big picture remains bleak. After the 2008 crash in that sector, the only thing that will repair the damage is time. I don’t think that we’re about to see the beginning of a new secular trend. In fact, the opposite. I believe that we’re in for a years and years of disappointment and underperformance in this space. But with that, there could be some cyclical up turns in this area, as we’ve seen a few times over the last couple of years.

What happened in tech back in 2000-2001 took a decade to correct. For the first time since then, we are seeing some of the big tech names like $INTC and $CSCO and a few others coming out of massive bases. I expect to see similar action in these big banks going forward: frustrating base building.

We said in this post and on Canada’s Business News Network later that week (see here) that we expected a roll over in natural gas prices to new lows. But that those new lows could lead to a face-ripper that could potentially take Natural Gas prices twice as high as the entry level we were looking for.

Since then, Natural Gas is approaching 10-year lows and the United States Natural Gas Fund ($UNG) has been making new all-time lows, including today. I’m not convinced that an important bottom is in yet, but I do believe that we’re getting close.

And by the way, I’m not trying to be a hero here making a macro call about long-term bottoms in anything. Just your typical, over-extended, reversion to the mean trade. That’s all. 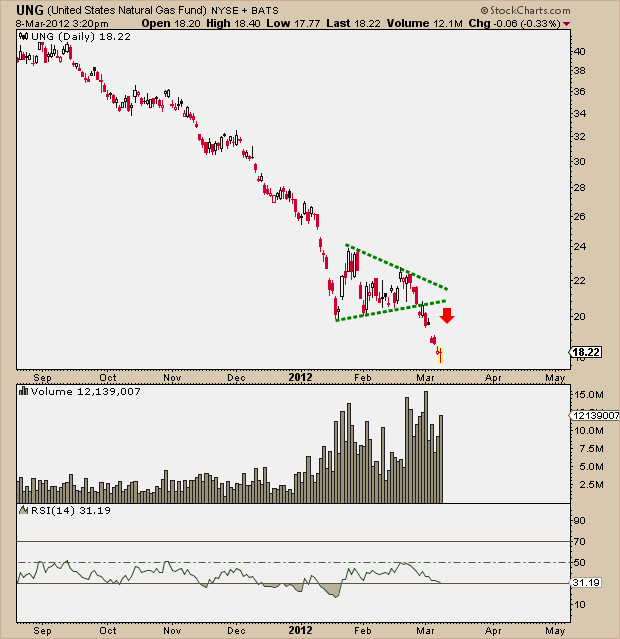 Throughout the month of February $IWM, the Russell2000 iShares ETF, was correcting a 40% move in 3 months by trading sideways for a little while. I said that as long as $IWM held on to the bottom of its range ($81), then the presumption was that it would breakout to the upside and continue its strong trend.

Well a few days after the post, the Russell2000 broke down below key levels and came down to its upward-sloping 50 day moving average. I have to admit that the action since the breakdown has been constructive. A solid bounce off that moving average has taken the ETF back up close to the range. If the Russell can back into the range then my previous stance holds. But if we see a lower low, then I would be extremely cautious about the stock market. The small-caps got us here, so we’re following the leader. If $IWM starts to make lower highs and lower lows, then I don’t want anything to do with it. 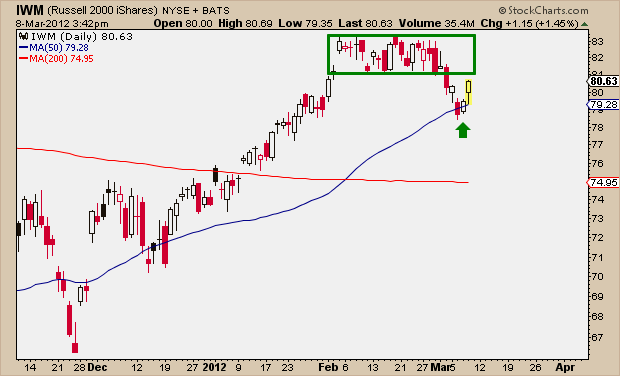 And so there you have it. I hope that this was as beneficial for readers as it was for me. It always helps to go back and see what you were thinking during certain times and then reflect on how you can improve. I always do this, but never really write about it. What do you guys think? Should I do this more often?

I’m off to ski with the wife for the weekend out in Utah. Hopefully I’ll make it back in one piece so we can take a look at some more charts on Monday. I tend to be much more conservative in my trading than I am out on the slopes. No stop losses on Double Black Diamonds!