As we’ve discussed in the past, securities can consolidate in one of two ways – through price or though time. When a stock or index is in a strong trend, these consolidations tend to occur sideways through time, rather than in a counter-trend price correction.

A month ago we put up a post titled, The S&P500 Time Consolidation. At the time, S&Ps were stuck in a tight range for that two week period at the end of January. But although the market wasn’t able to go any higher, it wasn’t going lower either. This “time consolidation” was enough to work off some overbought levels and build a nice base to support the next leg higher. We’ve seen higher highs ever since.

We are seeing similar action in the Russell2000 these days. On February 3rd the iShares Russell 2000 ETF ($IWM) closed at $82.95. For the rest of the month, this small-cap index has been stuck in a 2.5% range literally going no where. But that’s the sort of healthy consolidation that we want to see in a strong uptrend. Don’t forget, $IWM is up almost 40% from the October lows but just 12% year-to-date because of this range-bound February. 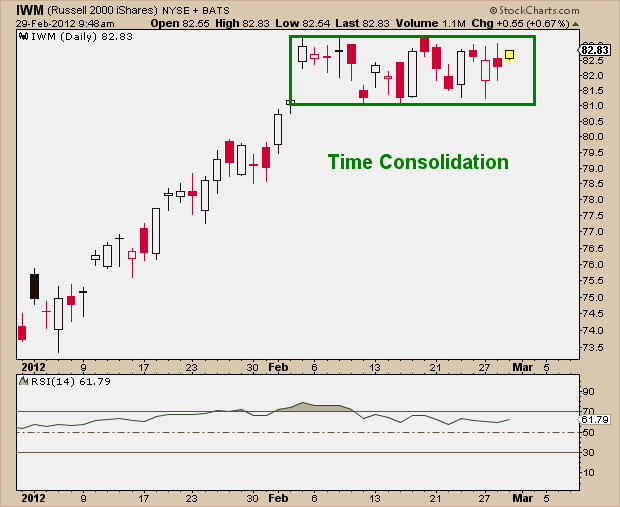 The presumption here is that the breakout occurs in the direction of the underlying trend, which is clearly up in this case. I would watch the $81 lows as key support and manage risk accordingly.

Carter Worth, chief market technician at Oppenheimer Asset Management, said this week, “It’s perfectly normal to stop and pause, and I would just interpret it as that rather than maybe the foreshadowing of something worse in terms of small-cap underperformance”.