We talk about it all the time, and for good reason. Former Resistance turns into support and vice versa. Remember this post-it note I told you to keep by your desk?

The Dow Jones Transportation Average is testing these polarity guidelines this week. There’s been a lot of fuss lately about how the Trannies have NOT been making new highs while their Dow Industrial counterparts take out 13,000. The lack of confirmation by the Transports gets the Dow Theorists all riled up.

I’m not as pure of a Dow Theory guy as I am in other aspects of technical analysis. And as much as I would like to see the Transports make new highs when the Industrials do so, new highs in Crude Oil can make up for that. I think this is especially important in the current market environment.

Remember, there is nothing fixed about market analysis. I don’t care how long you’ve been in the market, and what happened in June of 1952. The market evolves, and if you don’t evolve with it, you’re going to get left behind.

With just a few exceptions, Crude Oil and the S&P500 have been positively correlated for 3 years. And with Oil’s recent breakout, is it so terrible to expect some set-backs in the Dow Transports? Considering that the 20-component index is filled with names like FedEx, UPS, and a bunch of airlines…I think it would be irresponsible for us to think they wouldn’t take at least a little bit of a hit. Oil went up $15 in a month. Transports lost 5-6% during that period. Is that so terrible? Should we take this lack of Transport confirmation as the end of the world – sell everything?? no

Oh yea, and you want to talk about the underperformance in Transports?? How about the fact that the Dow Jones Transportation Average made All-time highs last year (that’s right, all-time highs), while the Industrials got no where near it. This Dow Industrial Average “outperformance” is just a short-term phenomenon. They’re almost 11% from all-time highs, while the Transports are just 7.5% from reaching that mark. So cut the trannies some slack, ok?

Anyway, now that I got that off my chest, let’s look at the polarity:

The late October highs and early December highs were key resistance. It’s as clear as day. After some churning in this area around New Years, we got the January breakout that we wanted. Now two months later we are retesting that resistance breakout. Is that such a terrible thing? 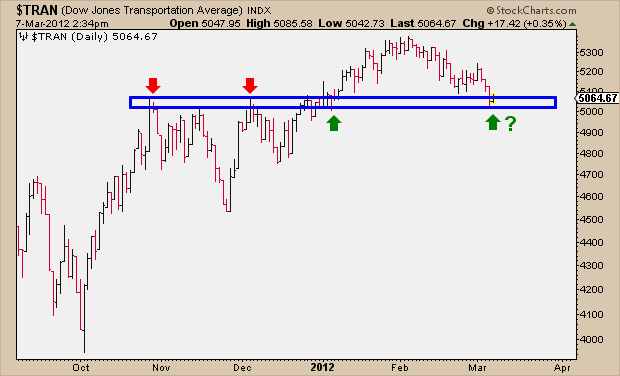 If polarity means nothing here and this support level starts breaking down, then come talk to me. And hey, it can – you never know. But until that happens, we’re in the camp that these pullbacks need to be bought. Period.