We recently held February’s Monthly Conference Call which our Premium Members can access and rewatch here.

In this post, we’ll provide a summary of the call by highlighting 5 of the most important charts/topics we covered along with commentary on each.

1. Most All-Time Highs for the NYSE and Nasdaq Ever!

We keep a close eye on market internals and boy did we get a breadth thrust last week!  The NYSE and Nasdaq registered the greatest number of new highs in history.

Chalk it up as yet another record breadth reading… As many of you know, these have been popping up left and right since June of last year. 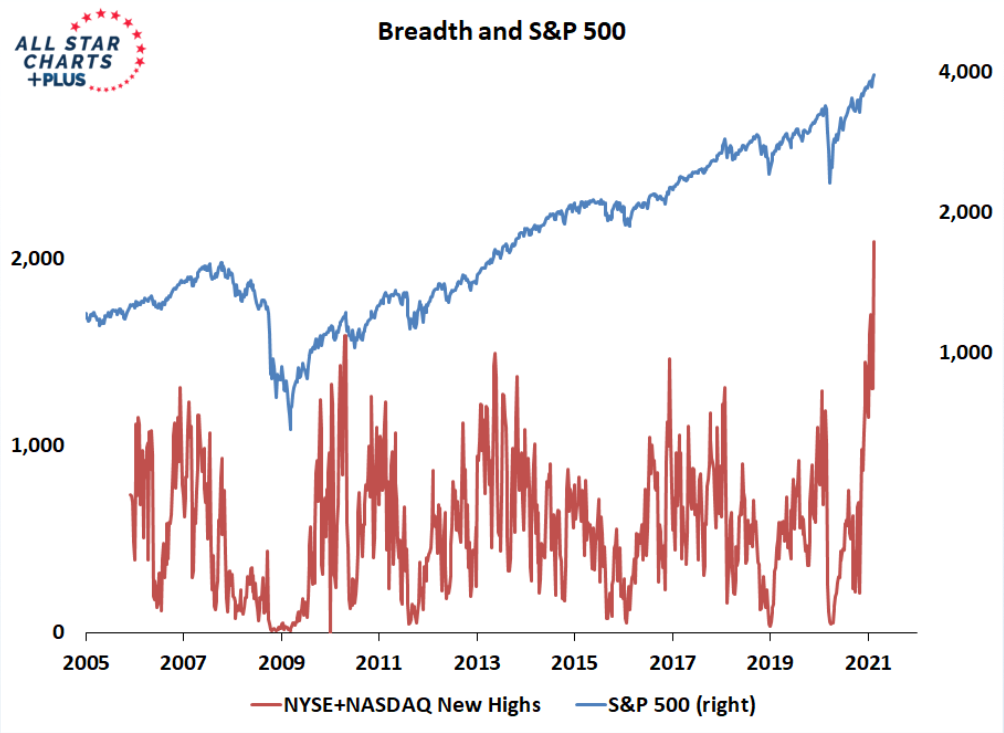 The fact these extreme breadth readings keep pouring in as the rally progresses suggests we continue to be in a healthy market that is being driven by broadening participation.  Most importantly, this is strong evidence that we are most likely at the beginning of a new bull market, not the end of an old one.

Keep in mind that we are likely to experience some divergences in many of these indicators in the future. This will be nothing but normal bull market behavior and we will want to ignore them until we start to see some bearish thrusts.

2. Participation Spreads Across The Globe

We’ve been pounding the table for months on Emerging Markets and especially China, but have been more or less neutral towards most of Europe.  This is for good reason.  The Euro STOXX 600 has gone absolutely nowhere for the past 20 years.

We are starting to see some strong evidence that suggests this could change soon.

One of the most important indexes in Europe, and the world, is the German DAXX.  It recently broke out of a half-decade long base and is now hitting all-time highs. 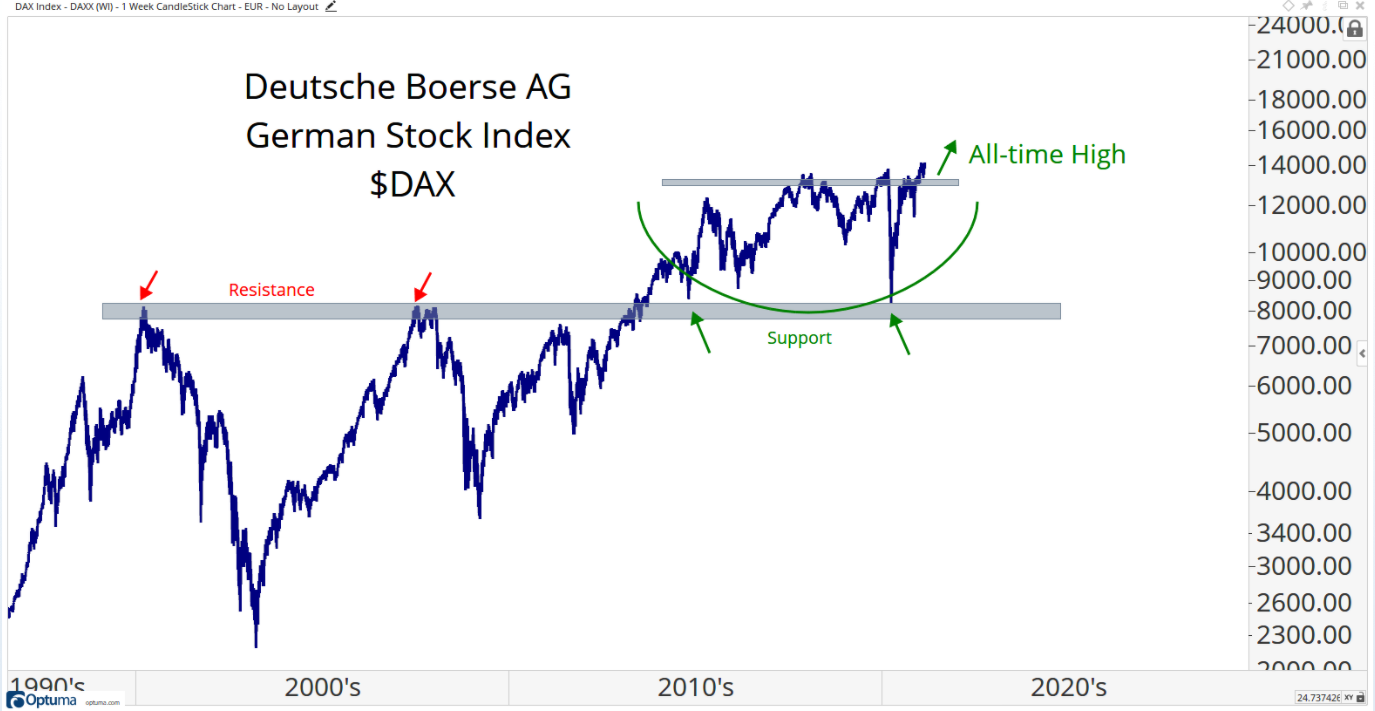 If European stocks are going to break out of a 20-year consolidation, the DAXX is most likely going to lead the way.

Germany isn’t the only area in Europe that’s showing strength.  The Netherlands AEX is breaking above its 2007 highs.  The Swedish OMX Stockholm 30 Index just broke out to new highs. The French CAC 40 Index recently broke out of a base.

Even some of the worst performers such as England’s FTSE 100 and Spain’s IBEX 35 are above important former resistance levels.

The fact that we don’t want to be shorting the secular laggards among Global Equity Markets is bullish information.

The same can be said for US Equity Markets, as we are buying even the most beaten-down sectors right now!

Speaking of which, let’s check in on the biggest secular laggard of all. Here is the Energy Sector SPDR $XLE.

Price just printed a breakaway gap above a key level of resistance. The bias is higher in Large-Cap Energy and we want to be long above 44.

The breakout is taking place above an upward sloping 200-day simple moving average, evidence that a long-term trend reversal is certainly possible here.  It’s been a while since we’ve been able to say that about XLE.

The new highs in Energy makes plenty of sense in the context of other recent developments such as the new highs in rates, rotation into risk-on and cyclical areas, and the strong performance from economically-sensitive commodities (Lumber, Copper, Crude Oil are all making new highs).

4. “Emerging” Higher From A Massive Base

Speaking of this whole global growth and reflationary thesis we see playing out, here’s another development to add to the above list… New record highs for Emerging Markets $EEM. 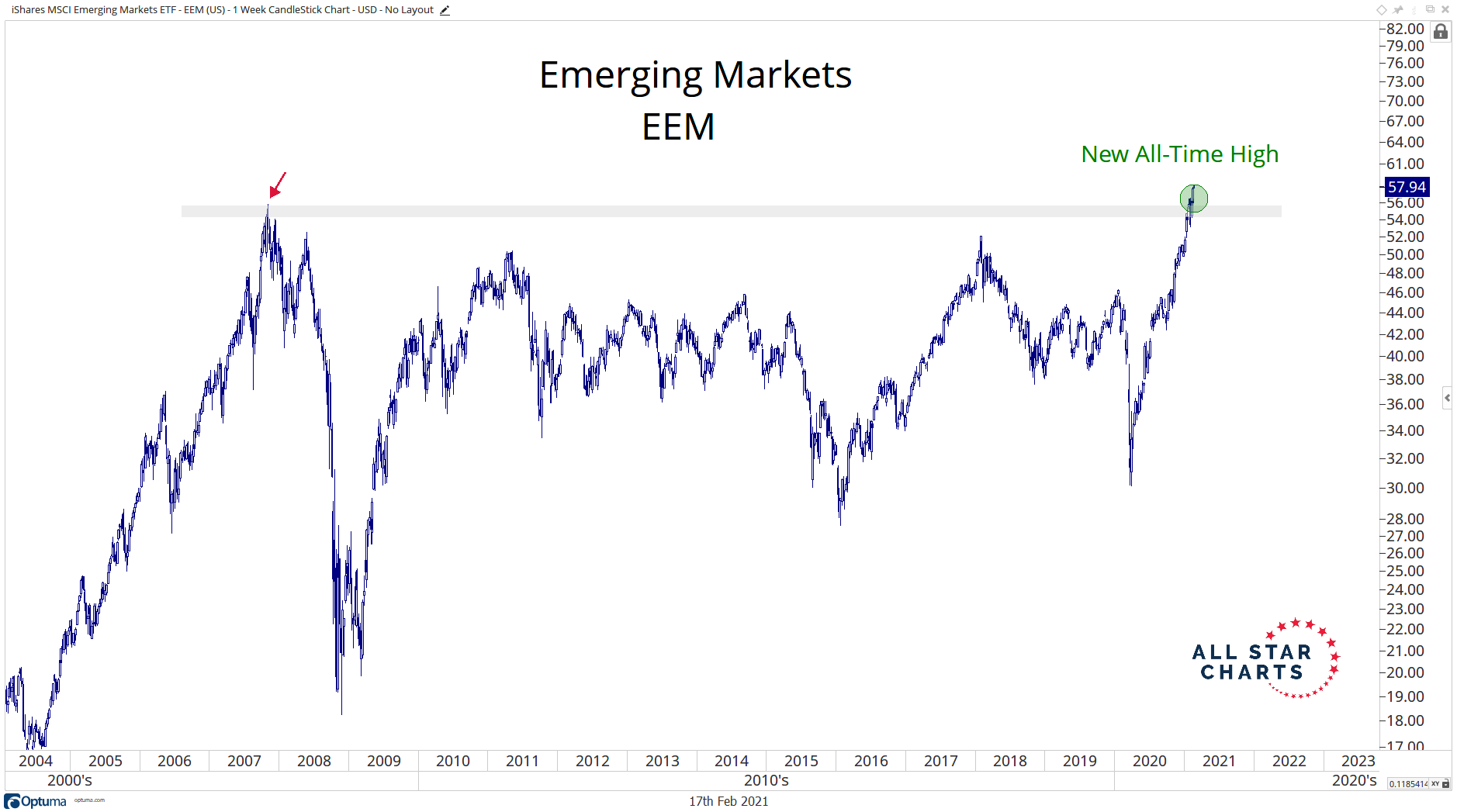 With Emerging Markets finally reclaiming their pre-Financial Crisis highs after 13-years of no progress it’s hard to argue that stocks are in a bubble. In fact, the weight of the evidence suggests we’re more likely just getting started.

If EEM is above those 2007 highs, we want to own this risk-on group of stocks.  It’s also difficult to be bearish Equities and Commodities in general in an environment where Emerging Markets are making new all-time highs.

5. The Worst Asset In The World?

So we already know that investors are bidding up offensive assets right now. What about defensive assets? Let’s check in on the classic safe-haven Treasury Bonds $TLT.

Let’s just say the Bond Market is NOT where we want to be putting our money to work. The charts below illustrate why. 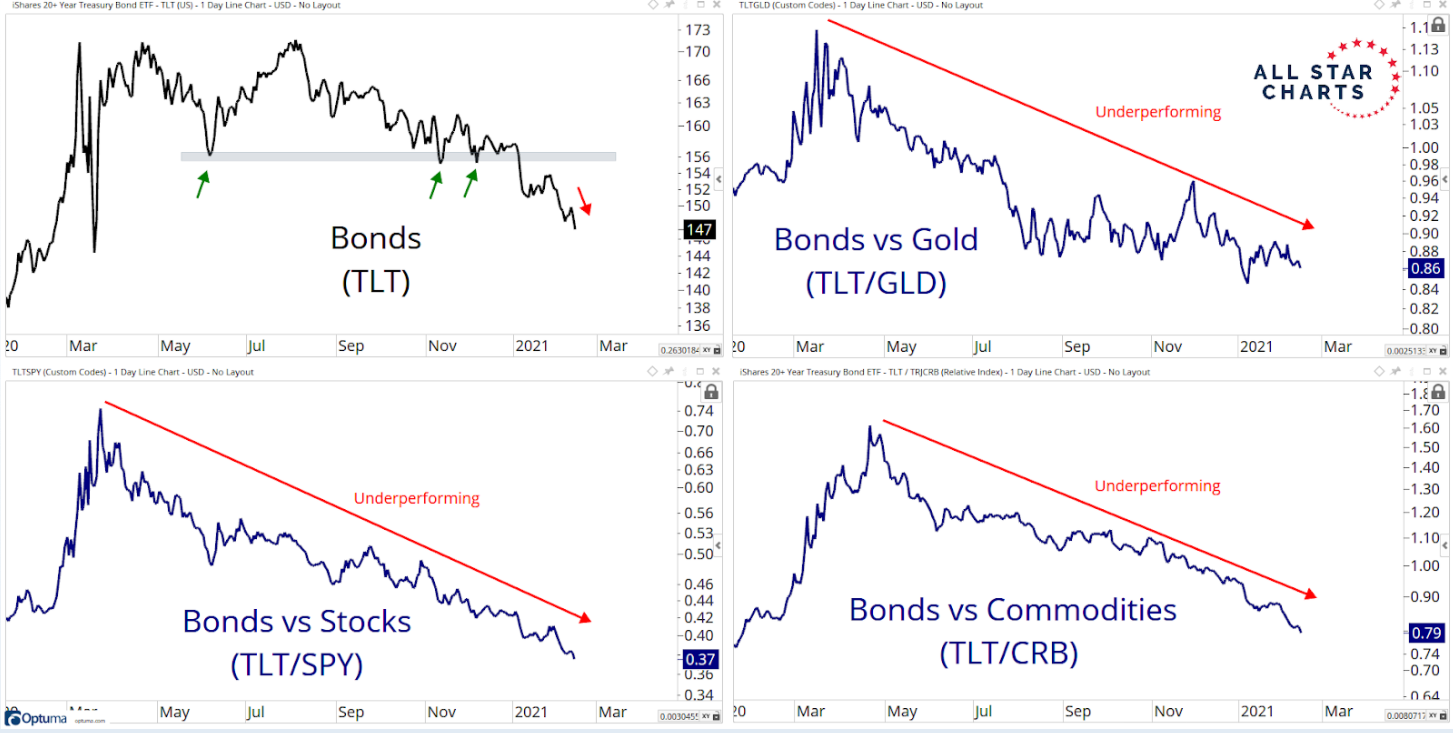 Bonds are not just making new lows on an absolute basis…

They also continue to grind lower against Stocks and Commodities on a relative basis. They are even in a nasty downtrend relative to Gold. Long story short, we don’t want to touch Treasuries right now.

This is also further evidence of the increasingly bullish risk-appetite we’re observing among market participants these days.

It’s evident we need to stay away from the more defensive areas.  The market is rewarding us for buying stocks, not rocks, and certainly not US Treasuries.

This is the message the market continues to emphasize, and it’s our job as investors to listen.

Those are some of the main takeaways from this month’s call.