We look at markets globally because that’s what they are, global markets. The weakness in stocks around the world throughout the first couple of quarters this year was a heads up that something was wrong. We did not see the rotation come in, like we had seen so consistently after any sector went through a period of underperformance. Rotation is the lifeblood of a bull market. Money did not flow back into foreign markets, and as it turns out, it was that the U.S. was the last man standing.

This one tells the story of exactly what was taking place at the time. It comes from Michael Antoneli of Baird and shows the year-to-date return of the MSCI World index, broken down by country. The United States was obnoxiously the last man standing. 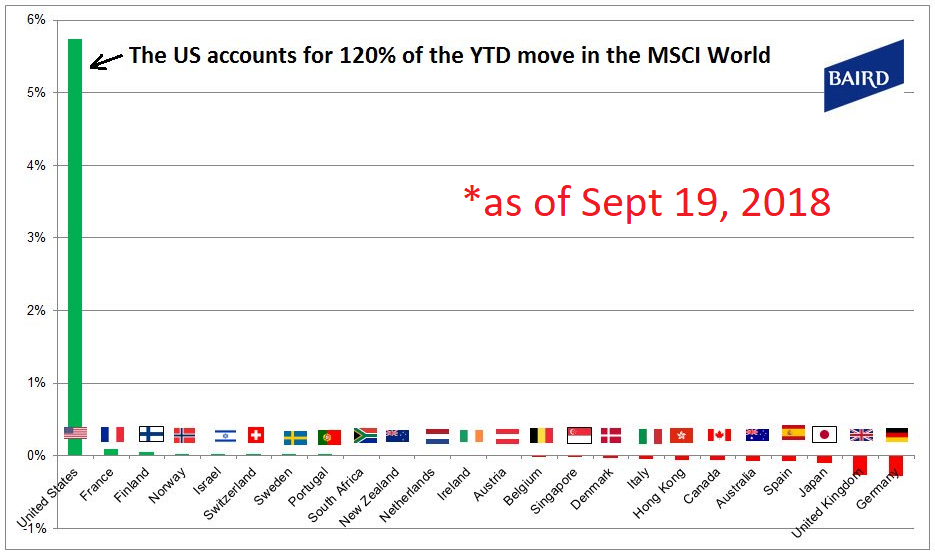 So we did not get that rotation and other markets have been leading us lower. The underperformance of Germany and UK as the worst of these developed markets suggests relative weakness compared to the rest. So that’s the area we’ll look for to either bottom and see rotation, or continue to drag down American stocks.

Here is Germany. Would you say this is a major top? Or a major bottom? 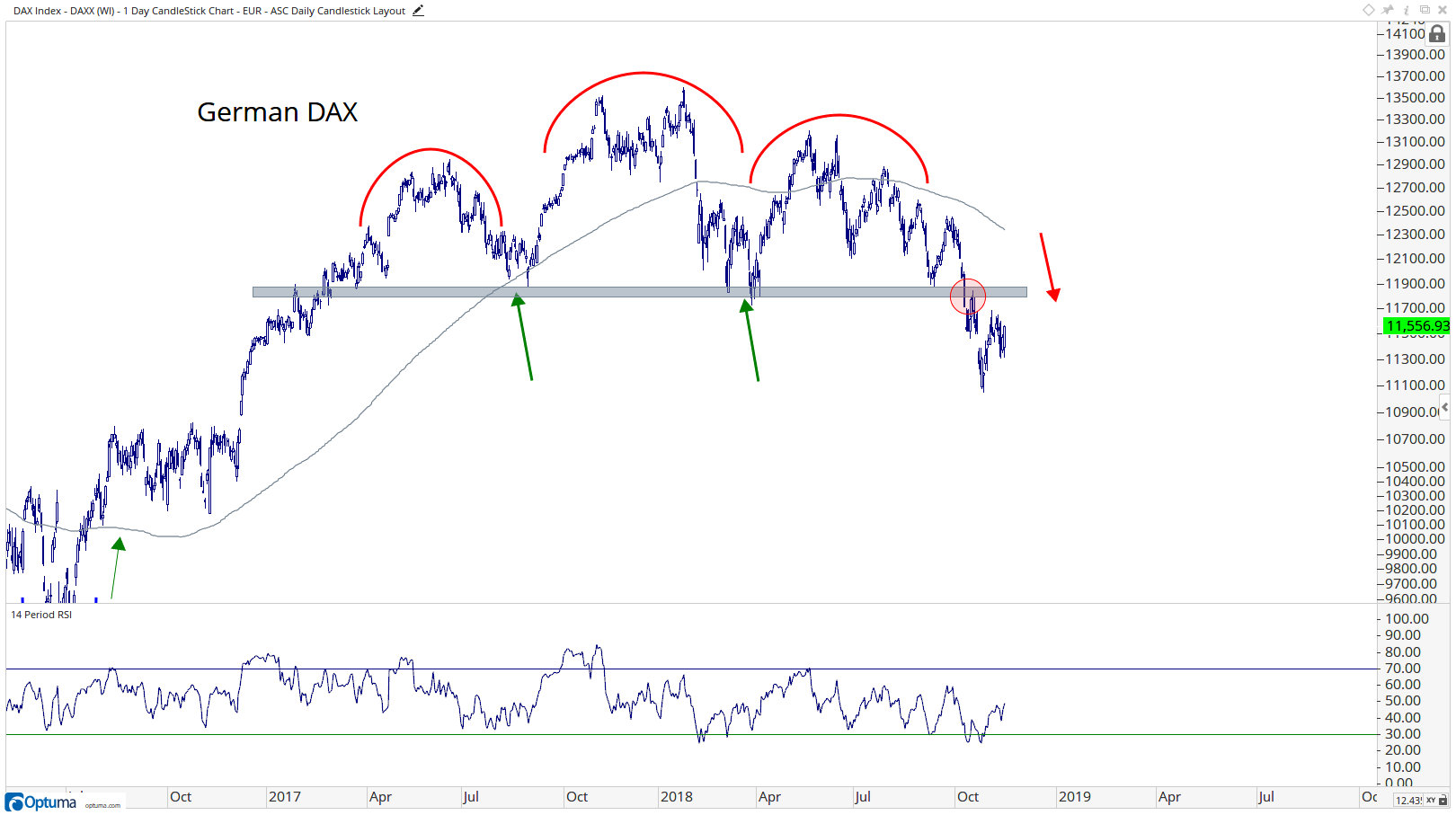 I see momentum in a bearish range. Prices are making lower lows and lower highs below a downward sloping 200 day moving average. The index has broken below support from 2017 and earlier this year and has remained below it for over a month. In my experience, I don’t consider any of these characteristics of uptrends.

Germany has been a great leading indicator in the past. We often see Germany rolling over prior to U.S. markets getting hit. Here is a good example from the 2015 top. Germany peaked and started rolling over well in advance of the U.S. 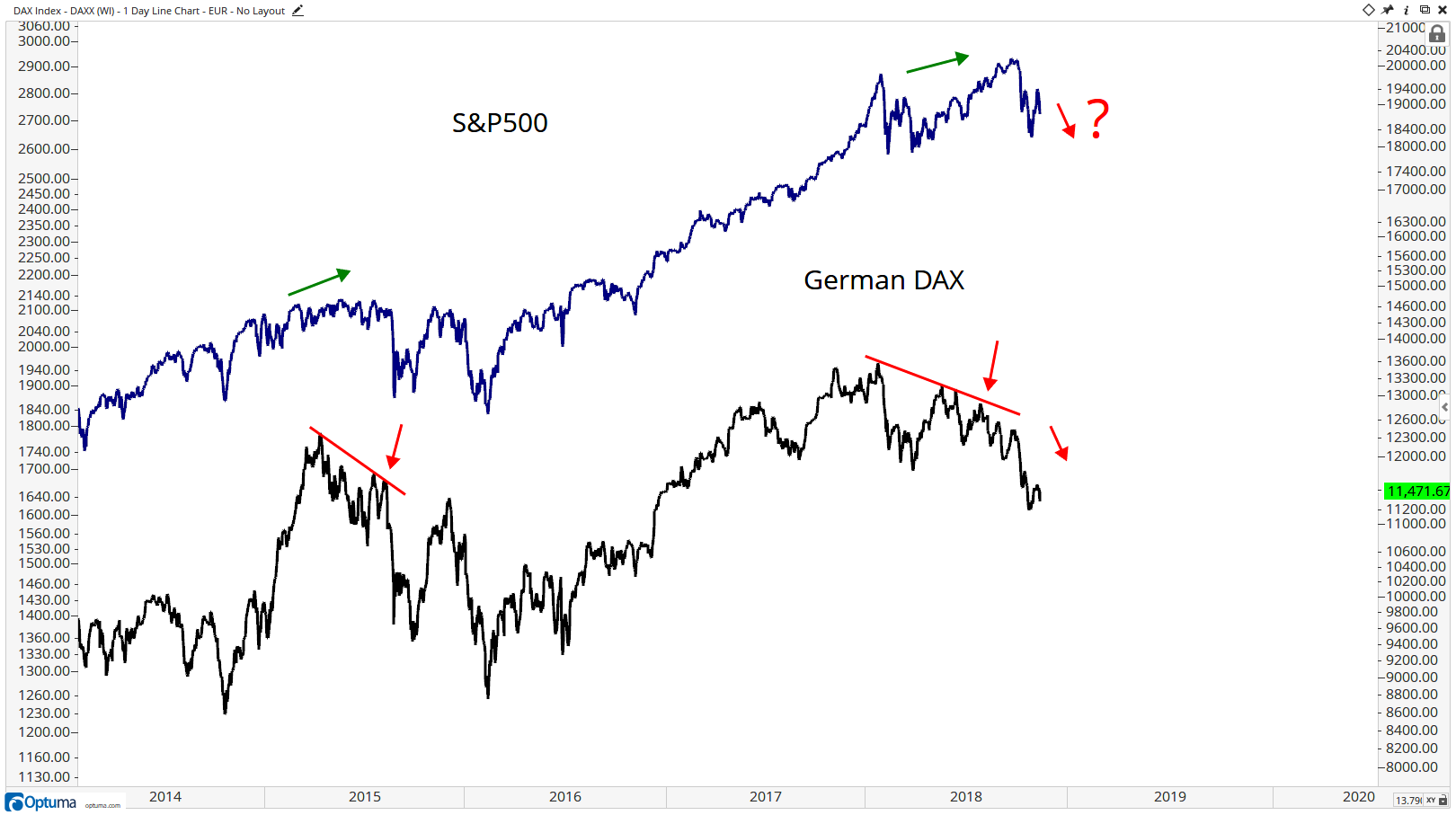 You could go back further and see similar weakness in Germany prior to the Tech bubble top in 2000 and prior to the 2007 Financial crisis as well. These are just two recent examples of German weakness leading the way lower. Ultimately, I would argue the United States catches down to them, not the other way around. We’re not seeing any evidence at all that a sell-off is over in Germany, or Europe in general for that matter.

Does this look like a major top starting at a logical level? 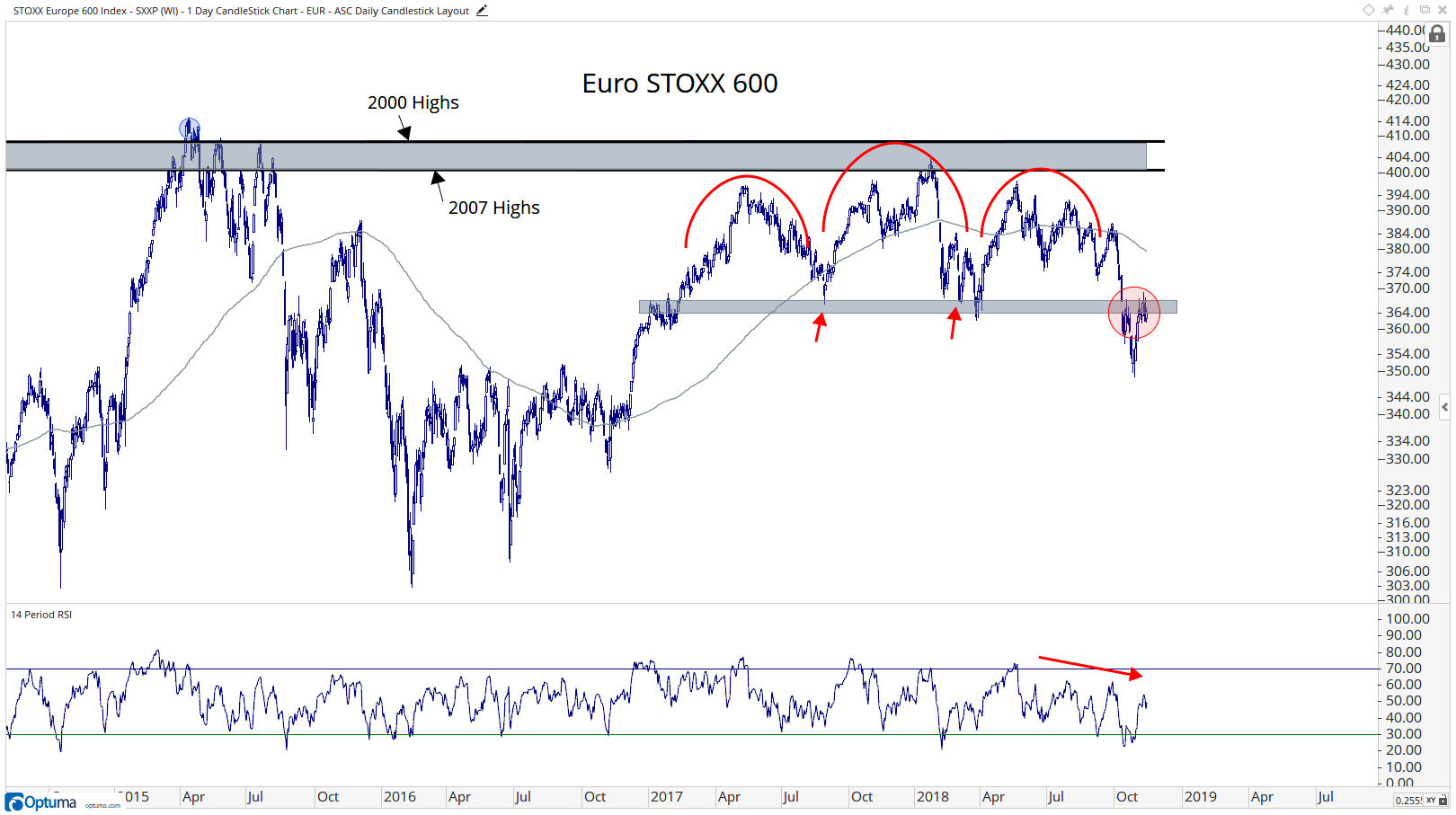 As long as Europe is below those lows from the past 2 years, we have to err on the bearish side. I can’t think of any reason not to.

We are seeing similar behavior in the Euro Stoxx 50, which includes just 10% of the components. I think of it like this is Europe’s Dow and the chart up above is their S&P500. 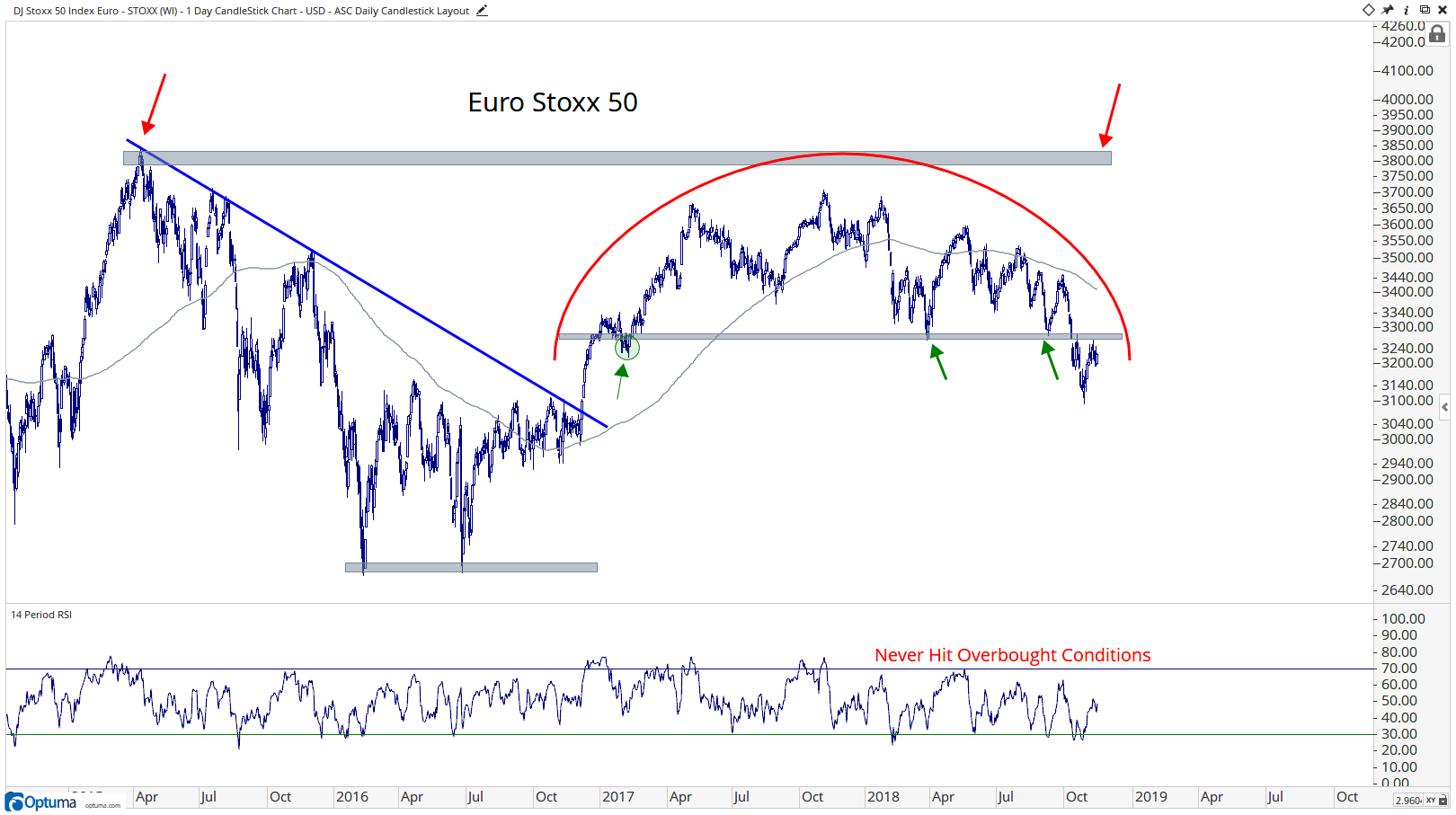 Every bear market has its leadership group. We say the same about bull markets. Back in 2015 a big part of our bearish thesis was the disaster in European Banks, particularly Deutsche Bank. When they bottomed in the Summer of 2016, it was a green light to load the boat in equities, U.S. or otherwise. The downside risk was no longer there.

Fast-forward after a few years of nicely trending bull markets, and here we are again. European Banks are leading us lower. Here’s the infamous Deutsche Bank. The trend here is not up: 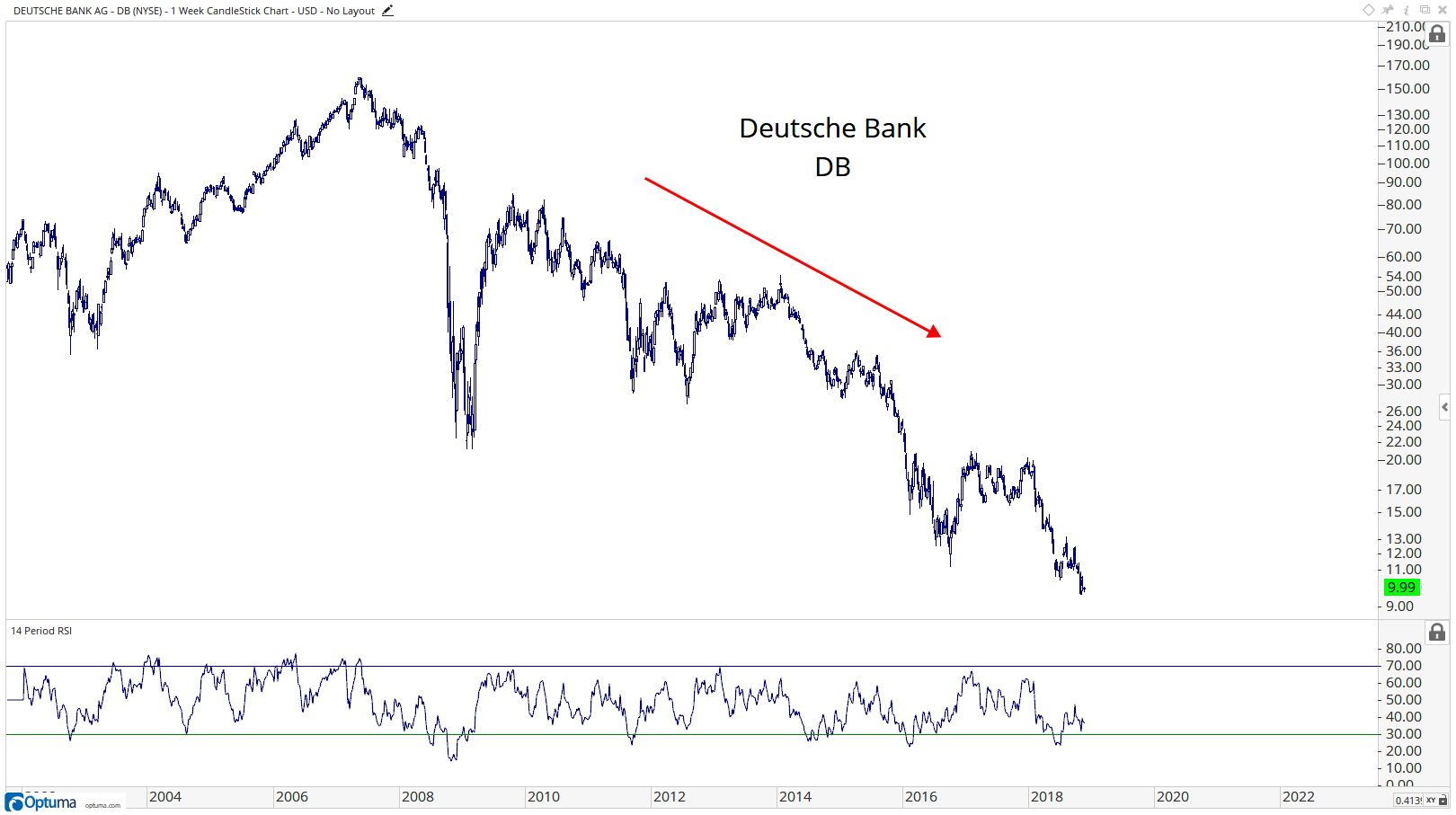 Here is a closer look at $DB. Which way do you see it? Like this: 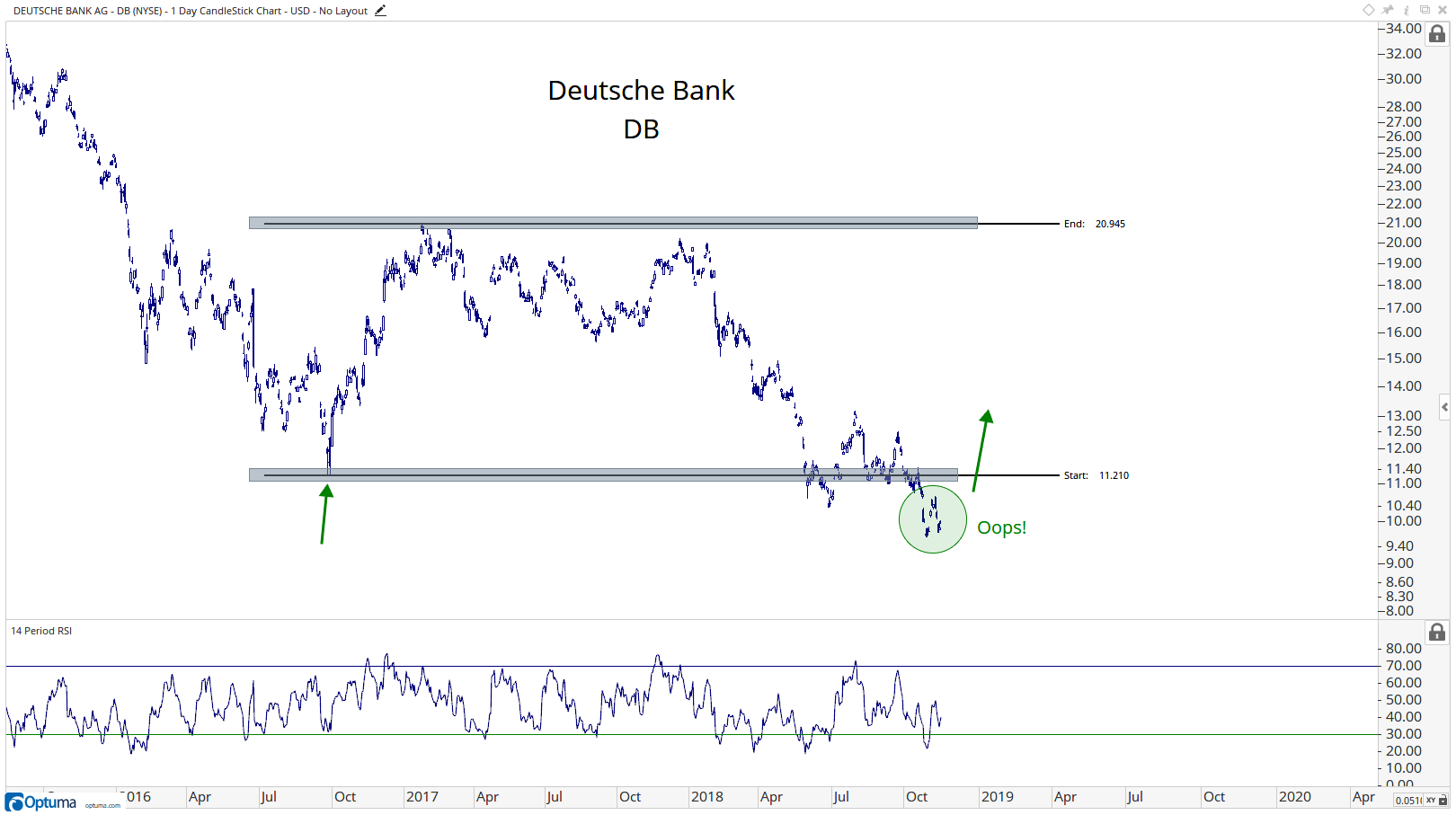 I’m going to go with the first one, and if we’re below those former lows, how can we not be erring on the downside? The risk here to me is lower, much lower. The bet we want to be making here is not that European Banks are going to recover and lead a massive mean reversion higher. I think it’s the opposite.

This does not help the bull case for me in U.S. Stocks. The way we see it, this is just another piece of the puzzle suggesting the risk here in stocks is to the downside.

I just want to reiterate my stance on high cash positions. I’ve been very clear about that since early October. If that’s an option, I still really like it as a portfolio strategy.