One of our favorite charts is the historic ratio between the Dow Jones Industrial Average relative to Gold prices. I bring it up today because we’re at an interesting point here in the short-term. Long-term, nothing has changed; we fully expect the 12 year downtrend in stocks to eventually continue lower relative to precious metals. 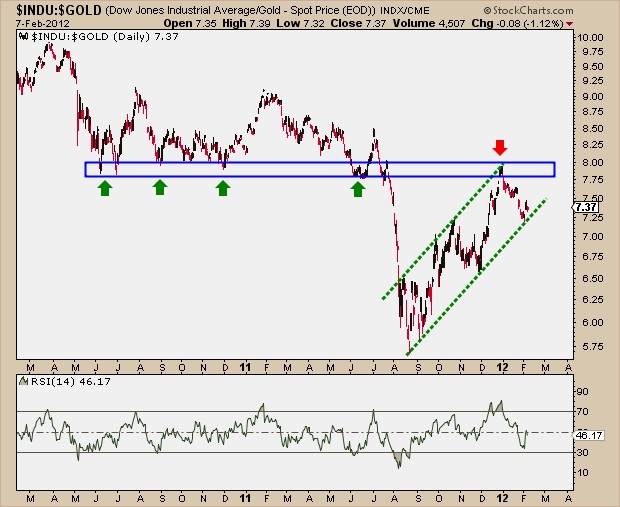 The key level of support over the last year and half was right around the 8:1 level. Late last summer, this important support was broken. The break turned out to be devastating as the ratio went on to new decade lows below 6:1. As important as the 8:1 level was for a year and a half, it would be naive for us to think that this wouldn’t at least serve as some resistance on any retests.

Not only did a break above that level fail late last year, but the Dow to Gold ratio has been stuck in this very well-defined trend channel since those August lows. I find it hard to believe that a new rally can begin here that would be strong enough to break back above 8:1, especially since it took over a year and a half to break down initially. The higher probability scenario is a breakdown below this trend channel and at least a retest of those August lows. If we are going to lean in any direction here it should be in the direction of the underlying trend. In this case, not only is the trend lower, but it is currently one of the most powerful trends in the global markets.

To fight that would be a little counterintuitive no?