Gold prices have had a nice little run since the Holidays. But now it’s got some work to do. We said on January 3rd that the false breakdown in Precious metals could spark a rally. Sure enough, we got the follow through that we were looking for and we’re now at a point of reevaluation: 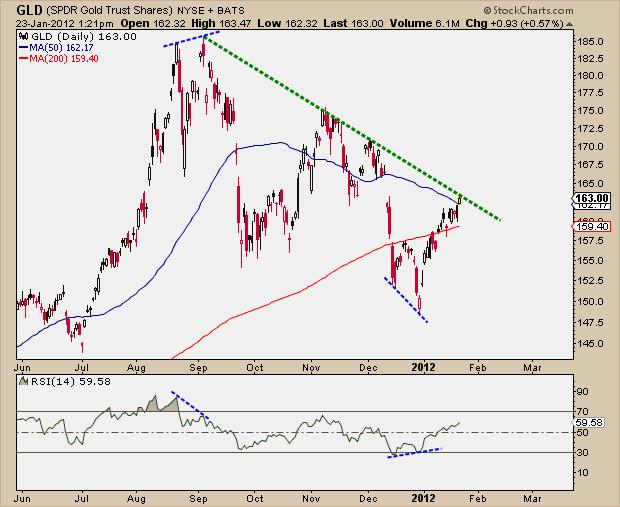 Now that $GLD is back above its rising 200-day moving average, the next key level we want to watch is this downtrend line that goes back to the all-time highs in September. This is now the 4th or 5th test of the trendline, depending on your calculations. But the point is that, “the more times a level is tested, the higher the likelihood that it breaks”. We say it and see it all the time.

We know that the long-term trend in Gold ($GC_F) is higher, both on an absolute basis and a relative basis. The questions become, where do you get in if you’re not in already? & Where do you own more if you’re already in? I liked the false breakdown last month as an entry point, but now comes the test of the trend.

Truth is that a little bit of a pullback here wouldn’t be the end of the world. It would allow the 50 day to flatten out a bit and would give $GLD a bigger base from which to break out of. This is important because the next big level of resistance is sitting right around 175 which represents the November highs.

$GLD has been in bearish mode since the bearish divergence in RSI last summer (see blue dotted lines). Like we said regarding Stocks last week, overbought readings in $GLD here would be a blessing. Right now RSI is sitting around 60, which is typical resistance for securities in bearish mode.

I think that once $GLD proves to us that it can breakout and hold on to 164-165 without rolling over, then the next stop is 175 and 185 after that. The trend is higher in $GLD folks. I think the big questions are when & where to get involved.