For someone who uses Dow Theory every single day, it’s not something that I write about much. I may indirectly reference certain tenets all the time, but rarely do I write specifically about the 130 year old Dow Theory. I think I pretty much laid it all out earlier this year in my post: 5 Things Every Investor Should Know About Dow Theory. The simple minded choose to stick to the Dow Jones Transportation Average and Dow Jones Industrial Average either confirming each other or diverging from one another. And while this may in fact be a one of Charles Dow’s tenets (although they were Railroads back then, not the Transports we have today), it does not even make it into my top 5 most important tenets.

The reason that, to me, the Dow Theory tenet regarding Transports and Industrials isn’t as important as many of the others is because it’s not designed to give buy and sell signals. It’s for trend identification. So while price is the most important indicator to recognize a trend, Dow Theory can certainly be used as a supplement to that. But it’s important to understand that it’s only that and nothing more. So while you might hear people saying that it’s a Dow Theory Buy or a Dow Theory Sell Signal, it’s not. The new highs we saw this week in the Dow Jones Transportation Average finally confirmed the new highs that we’ve already been seeing in the Dow Jones Industrial Average. So yes, it’s confirmation that stocks are in an uptrend. But I think you need to be ignorant at this point to not recognize that, yes indeed, U.S. stocks are and have been in an uptrend. 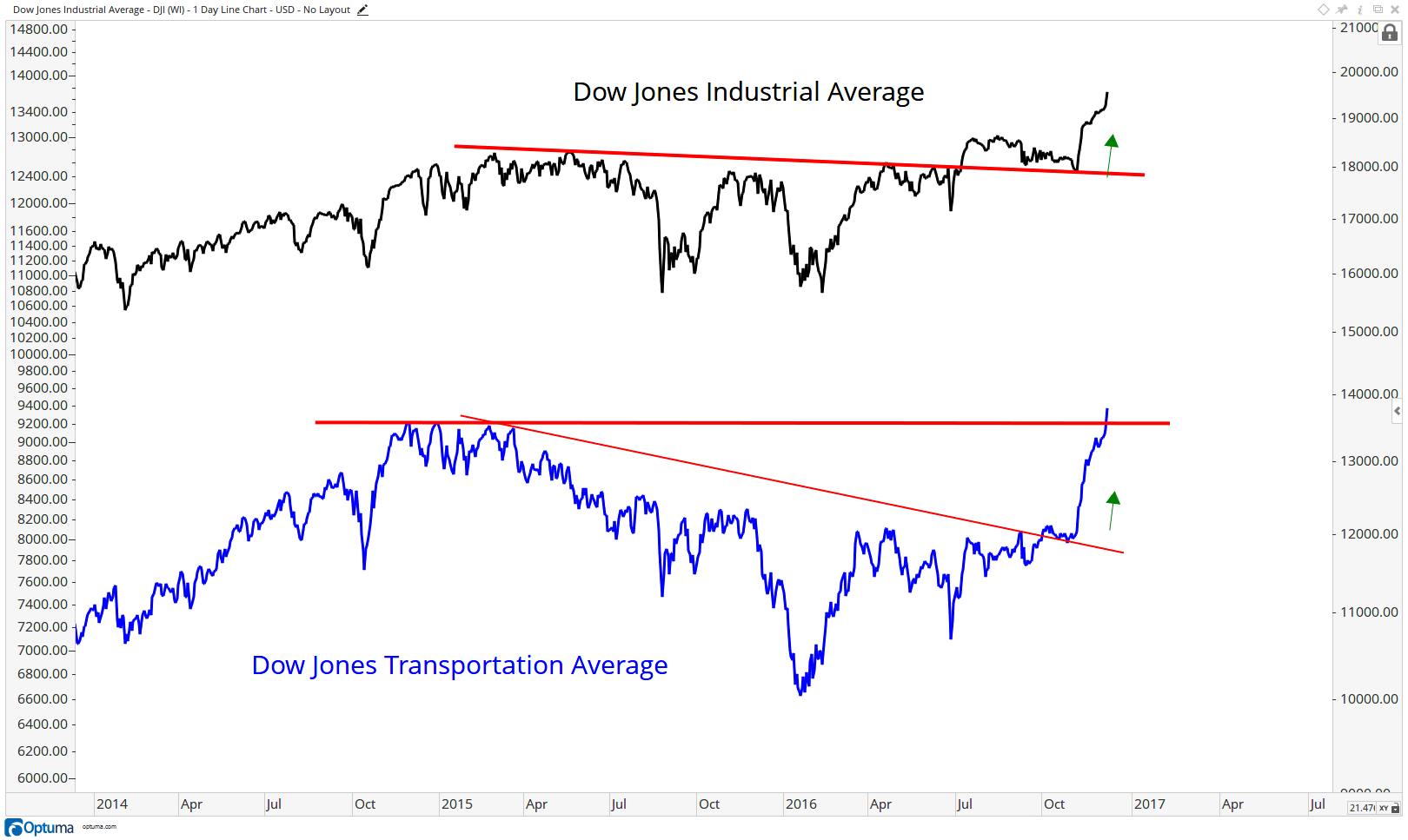 So let’s review. Yes the Dow Transports confirmed the highs from the Dow Industrials. So yes, we are in an uptrend. Does it mean it’s a buy signal? If you’re job is to create misleading headlines, then yes. For sure. However, if your job is to make money in the market, then no, absolutely not. In fact, there is zero evidence that suggests the Dow Jones Industrial Average does any better in the short-term after both Averages first close at new highs, thus confirming their uptrends. You can even dig a little bit deeper into the data if you’d like and you’ll find that stocks actually do worse over the next month on average (and median) after the Averages first confirm one another.

Most importantly, let’s remember that I appreciate and certainly incorporate Dow Theory into my regular process. It very much works today. But it doesn’t mean that we need to turn it into something it’s not for the sake of page views and click bait. This particular Dow Theory Tenet of Industrials and Transports confirming one another is simply a supplement to price action to help identify trend. It is no different than a moving average or a trendline in that respect. These are all far seconds to price itself in the importance hierarchy of trend recognition.

In addition, I definitely recommend reading: 5 Thing Every Investor Should Know About Dow Theory to give you a better idea of the more important tenets, and also some of the others that I keep towards the bottom of my list, like volume.

Click Here to join me on a more official capacity RISK FREE to see how I incorporate Dow Thoery every single day.