In recent weeks, we’ve witnessed a powerful rotation as many of the secular laggards have assumed short-term leadership positions.

In today’s post, we’re going to take a stab at using a new visualization tool in order to illustrate this recent changing of the guard.

This scatter plot is comparing the maximum drawdown from 52-week highs to the March lows (Y-Axis) with the short-term performance off of the May 13th low, among all of the 150+ Dow Jones Industry Indexes. The plot-sizes are based on how large the current drawdown is… In other words, the bigger the dot, the bigger the drop. 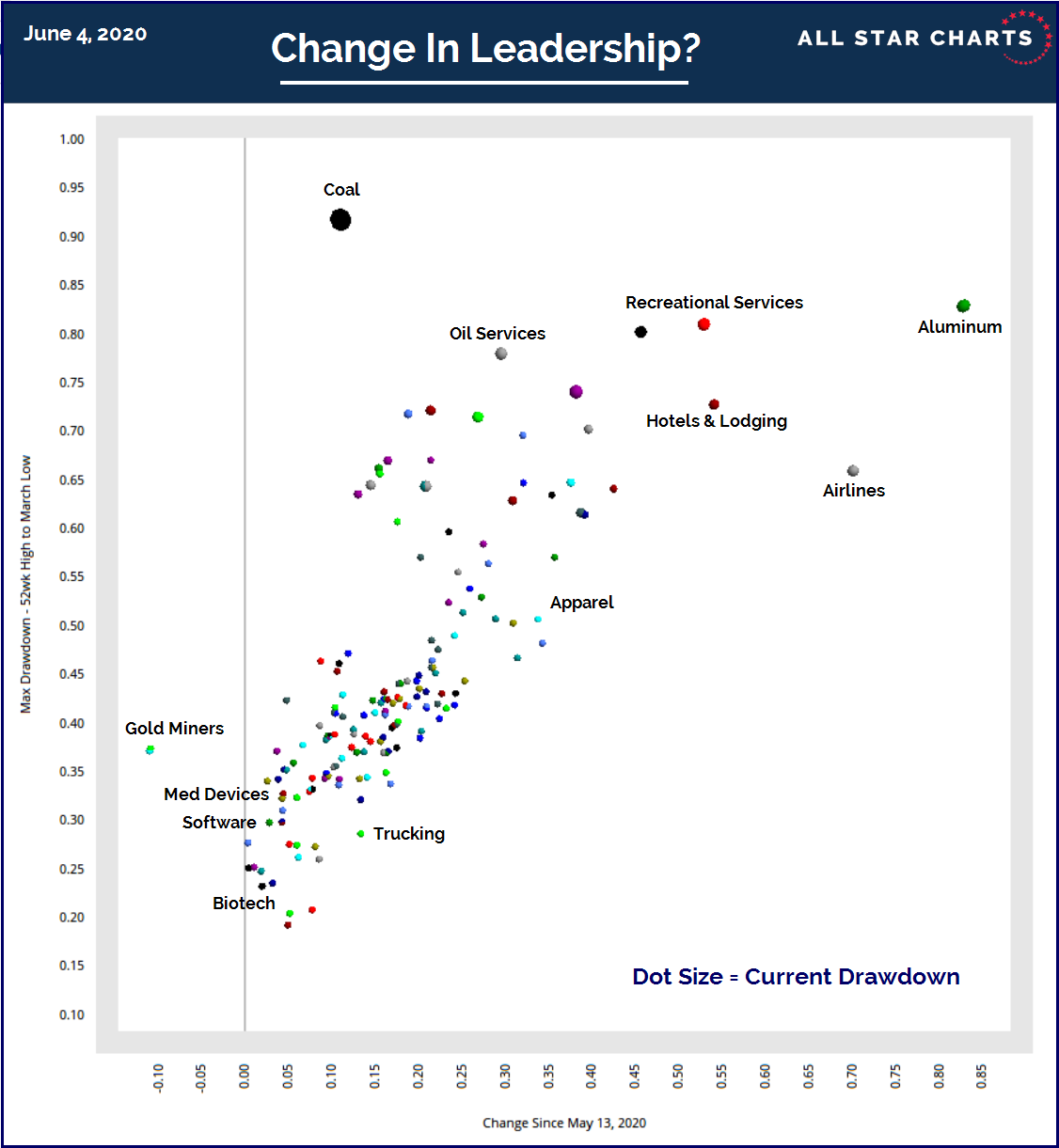 The message here is pretty straightforward. The best performing areas in recent weeks have been the same areas that suffered the most structural damage during the Q1 crash.

Is this bullish? Is this bearish? Or is this simply the constructive action we’ve been waiting for? As Ralph Acampora likes to say: “sector rotation is the lifeblood of any bull market.”

While we still want to see the leaders participate, and they are, it is always a bullish development to see participation broaden to the weakest areas.

The linear relationship in this Scatter Chart is clear. Notice how the dots are trending up and to the right? This is merely illustrating that the Industry Groups which suffered the worst drawdowns at their March lows are now emerging as the leaders over the past 3-4 weeks. The previous leaders have not stopped participating, they have just paused a bit relative to the laggards. This is not bearish.

What this really tells us is that markets are firing on all cylinders right now. Our scatter charts of International ETFs and Global Indexes are currently showing similar counter-trend tendencies.

But we always want to be careful not to put too much emphasis on just a few weeks’ worth of data. While the former laggards are finally perking up and showing signs of life, many of them are still facing significant overhead supply as they endured the most painful structural damage during the Q1 selloff.

This characteristic can also be visualized in the Scatter Chart as the size of the dot is based on the present drawdown. Notice how most of the Industry Groups in the top right have larger dots than the rest? This tells us that despite their recent counter-trend rallies, these areas are still in significant long-term downtrends.

Oil ($OIH) and Recreational Services, Airlines ($JETS), Hotels & Lodging, and Aluminum are some good examples. Strong and encouraging bounces, definitely bullish for the overall market, but still suspect at the Industry level as these groups were the hardest hit in Q1 and still have lots of work to do.

When we look to the lower left of the Scatter Chart though, notice how many of these Industry Groups that are underperforming in the short-term are actually the secular leaders. This includes groups like Software ($IGV), Medical Devices ($IHI), Biotech ($IBB), and even Gold Miners ($GDX), which were all some of the first areas to reclaim their former highs.

Being in the lower space of the chart is a positive as it represents the areas that were most resilient during the Q1 selloff. But being on the left side isn’t too positive over the near term as it means these areas are lagging. Although, after such incredible outperformance from many of these groups, seeing them take a breather and digest gains while the laggards pick up their slack in the meantime is definitely constructive.

The real question is – who will be the future leaders? If the market continues to grind higher, we’d like to see Tech and the former leaders resume their positions of strength. But at the same time, we want to see the laggards continue to participate, even if they don’t continue their recent stretch of outperformance. Regardless, this type of rotation is never a bad thing.

We’re excited to introduce more ways to visualize data like this in the future. We have a lot of cool things in the works in terms of Scatter Charts, Bubble Charts, and other quantitative analytical tools to help us visualize the trends at hand.

Let us know what you think of this chart. We always love hearing from you!