It’s hard for a mechanic to tell you what’s wrong with your car without lifting the hood to see what’s inside. In the stock market it’s no different. We often hear people giving a diagnoses of the market’s health simply by using the S&P500 or some other popular index. To me, that’s irresponsible. This is not a stock market, it’s a “market of stocks”. There are 500 stocks in the S&P500. The market is not a thing, it’s a lot of things.

Sector rotation is the lifeblood of any bull market. Some sectors are indicators of risk appetite while others point to risk aversion. Consumer Discretionary stocks include companies where we spend our discretionary income: retailers, homebuilders and autos for example. Consumer Staples, on the other hand, consist of companies that consumers would use regardless of whether times are good or bad. No matter how the economy is doing, we’re still going to drink beer, smoke cigarettes, brush our teeth, wash our dishes and clean our clothes. These types of companies are the Staples.

If you’re a buy side long only manager, you can’t short stocks and you can’t go to cash. The mandates of these mutual funds require managers to be long at all times. It’s the PMs job to outperform the benchmark, not necessarily to make money, just to outperform. The way they outperform in a bull market is to overweight Consumer Discretionary stocks relative to Staples. When stocks are falling, one way they beat their benchmarks is to overweight Staples over Discretionary.

This doesn’t happen overnight either. Think of it like a cruise ship. It takes a long time for it to do a 180 and turn around. By observing this rotation, it is obvious what the ship is doing. We treat the market the same way.

This is a chart of the Consumer Discretionary Sector Index Fund relative to the Consumer Staples Fund $XLY vs $XLP. We are now breaking out to new all-time highs, which is evidence of risk appetite for stocks, not risk aversion: 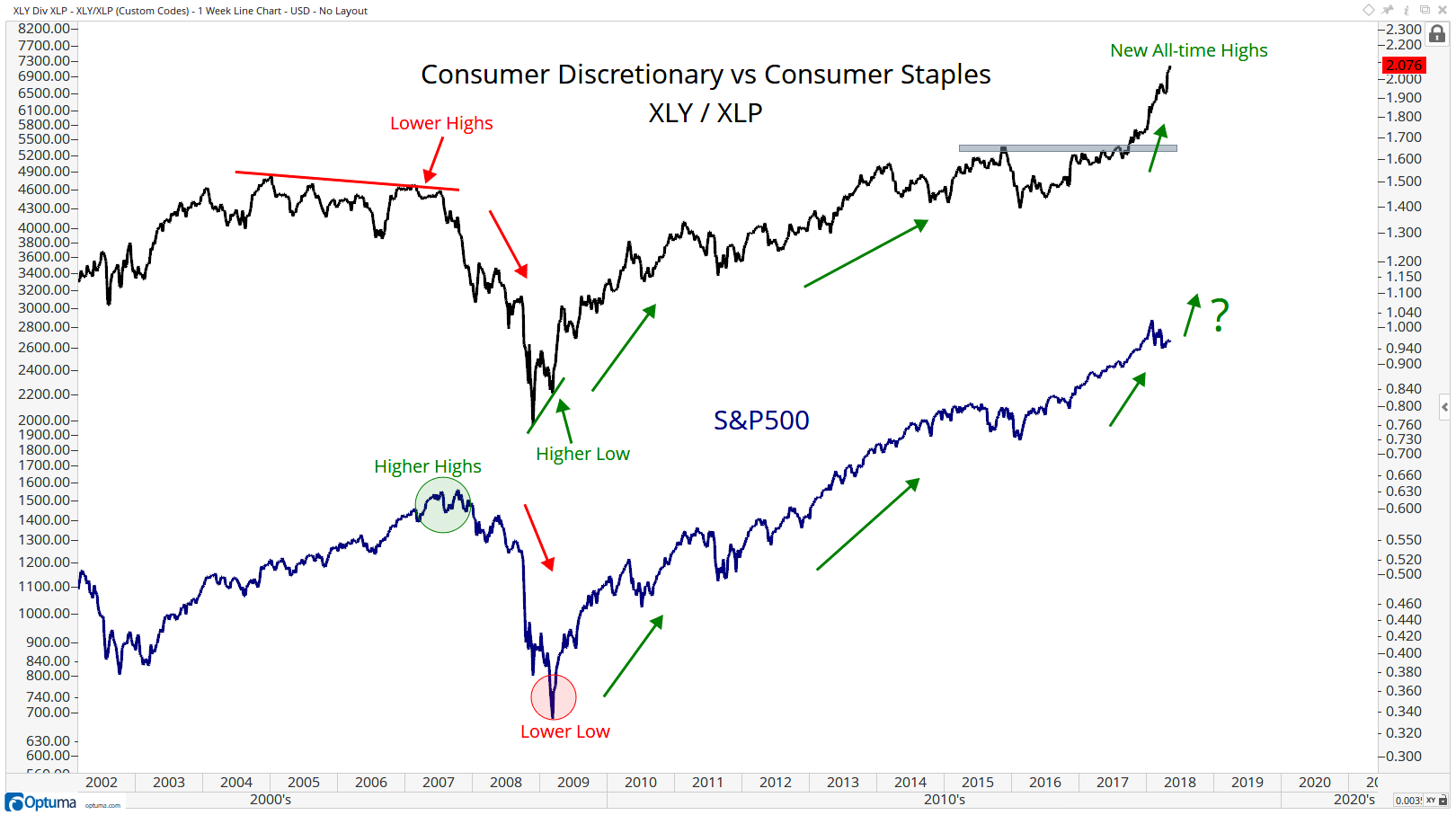 Look back to the highs in 2007 for the S&P500. Notice how the Discretionary/Staples ratio had already peaked and was putting in lower highs while S&Ps were still making higher highs. This bearish divergence was evidence of a shift in positioning from the long only community. It was a heads up, among many other things at that time, that something was changing.

Fast forward to early 2009 and the Discretionary/Staples ratio was putting in a higher low while S&Ps were still making lower lows. Although the index itself, or the “stock market”, was still in a downtrend, the “market of stocks”, was already improving. We were seeing money flowing into Discretionaries and out of Staples, indicating that the long-only PMs were already putting money to work to take advantage of higher stock market prices. The rotation was clear.

I have been in the camp that stocks are going higher and we want to be buyers. This chart above is further confirmation that we are on the right track. I see a lot more good than bad out there, and we can chalk up new highs in the XLY/XLP ratio as another feather in the hat for the bulls.