From the Desk of Ian Culley @IanCulley

It doesn’t matter where you look: Commodities are digging in, finding support, and reclaiming key levels.

Grains, softs, base metals, and energy have all stopped going down. Even gold is bouncing off critical levels of former support.

But it’s not just the fact the commodity correction is hitting the pause button that’s important.

Let’s take a look at a few charts.

First we have cotton futures: 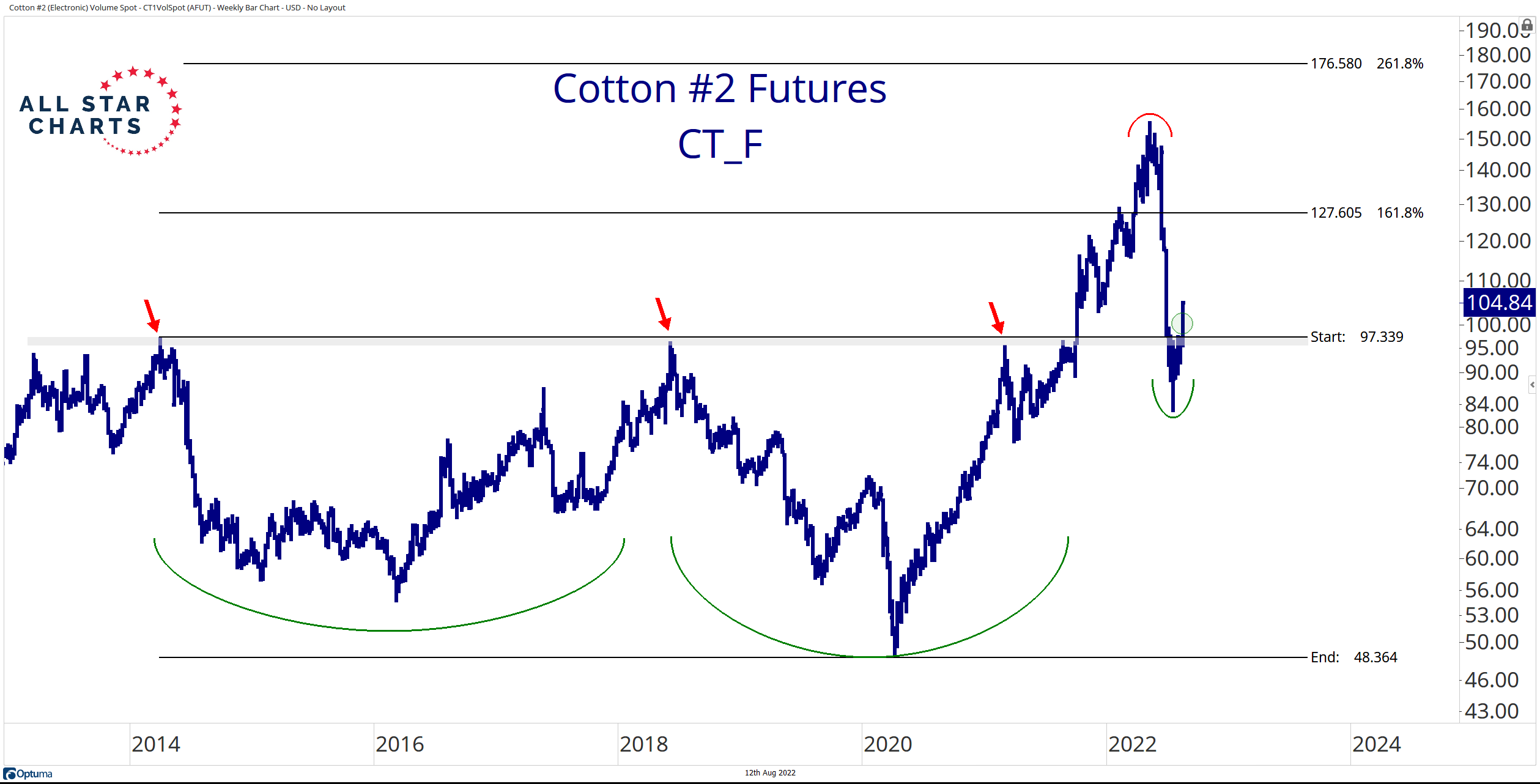 But it was answered by a near-vertical decline back into its prior range.

That shelf of former highs kept a lid on cotton prices for almost a decade. And the 2018 highs mark their peak during the prior cycle.

To say it’s constructive to see cotton back above its prior cycle highs is a gross understatement. It’s as bullish as it gets.

Cotton isn’t the only commodity to retest a crucial level. Lumber futures have as well.

Here’s a zoomed-out chart of lumber: 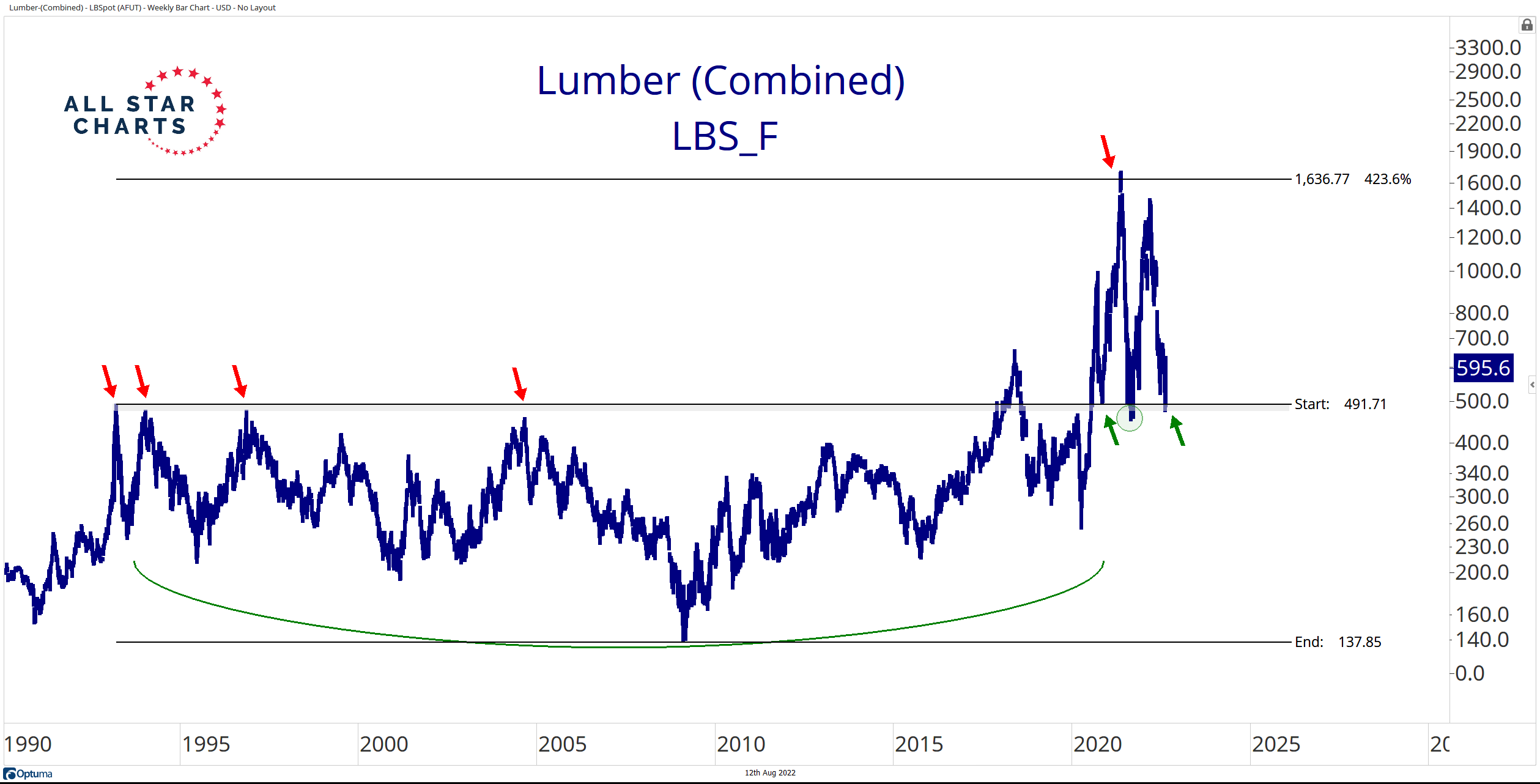 We’ve been talking about big levels needing to hold in recent weeks for both stocks and commodities. And there isn’t a bigger level for lumber than 490. It capped prices for decades, going all the way back to the mid-1980s.

That multi-decade resistance level is now acting as support. This is the the principle of polarity in action – former resistance becoming support.

This is an excellent place to get long in anticipation of a mean reversion rally. Lumber simply finding support at this level is huge.

Like Dr. Copper, lumber is an economically sensitive commodity. For demand to kick in at a logical level with decades of price memory bodes well for risk assets and the economy.

This isn’t bear market activity. If the world were coming to an end, people wouldn’t need lumber.

But that’s not what the market is telling us. Rather, raw materials and material-related stocks are catching a bid.

The triple-pane chart of the Metals and Mining ETF $XME, Copper Miners ETF $COPX, and Steel ETF $SLX is a great illustration: 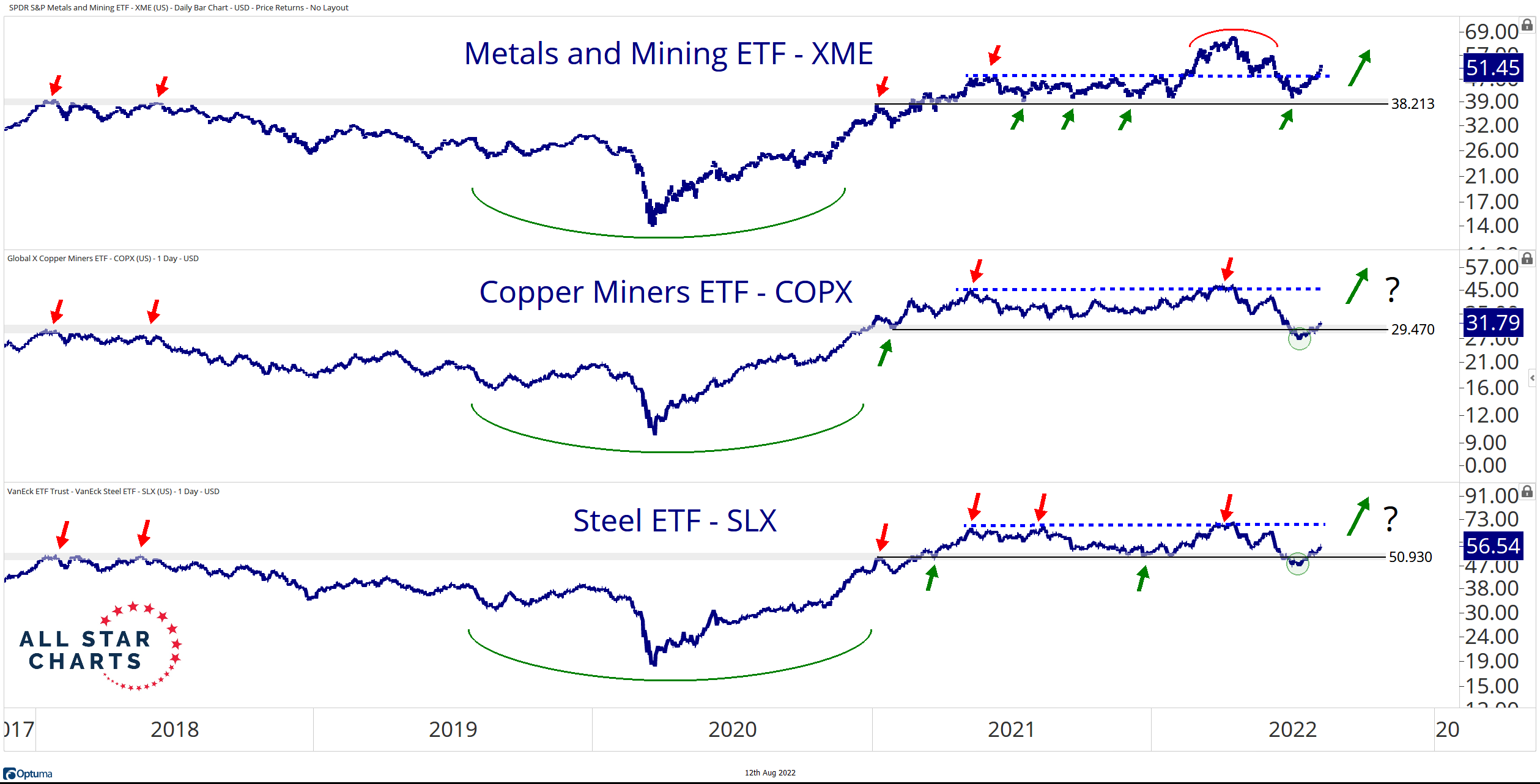 All three ETFs are digging in and bouncing higher exactly where we’d expect – those prior cycle highs from 2018. COPX and XME are up more than 8% over the trailing five days, and SLX has climbed more than 6% during the same time.

Commodities and cyclical value stocks have come under intense selling pressure in recent months. But now, these areas of the market are finding their footing.

This is a feather in the hat for the bulls, as the risk-on tone spreads beyond growth stocks to the more economically sensitive assets.

Now that commodities and their related stocks have found their footing, do they have the legs to run it back?

Premium Members can log in to access our Weekly Commodities Report and Trade of the Week. Please login or start your risk-free 30-day trial today.