We don’t need to dig too far into the internals to know breadth has been deteriorating since last week even as the S&P 500 was making new incremental highs. Most large-cap sectors failed to make new highs with the S&P as well as many other major indexes, including small-caps, mid-caps, and Transports.

This measures the percentage of stocks that are above their volume-weighted average price anchored from February 19th, which is when the market peaked. We use this similar to any other breadth indicator in that we want to see it make new highs to confirm the strength at the index level.

Currently, at a reading of just 37%, this tells us that the average buyer in the majority of S&P 500 stocks since the market topped is in a loss position. I know that’s a mouthful. The bottom line is the average buyer since the peak is likely still underwater.

Notice how the percentage of stocks above their AVWAP was above 50% last week but registered a bearish divergence when stocks made an incremental new high Friday.

The S&P 500 (SPY) itself is currently sitting just above its own February 19th AVWAP. Bulls want to see prices hold above this potential support, especially as other major indexes have recently failed at key levels of interest.  Add this to the fact that the majority of components are already below their own AVWAP from the market’s peak, and the weight of the evidence suggests we violate this level.

This is just one of many breadth indicators flashing bearish divergences right now. Here is the percentage of new 10-day highs which is also sending a cautionary message.

When the S&P made its highest high in nearly 30 trading days last Friday, a measly 20% of components in the index were able to make as much as a 10-day high. The percentage of new 21-day highs is showing a similar bearish divergence.

While we know there have been winners in this market, there have certainly been more losers. The reason it hasn’t show up so much at the index level is because the outperformers have been mainly mega-cap names and these stocks have such significant weightings that they continue to propel the averages to new highs despite weak breadth.

The small and mid-cap segments are much more evenly weighted than their large-cap peers, so let’s take a look at the Russell 2000 (IWM) and S&P Mid-Cap 400 (MDY).

These small and mid-cap indexes continue to lag as they failed to confirm the new highs in the S&P 500 last week. The reason is simple. Unlike large-caps, they don’t have a handful of leaders that are dominating their indexes performance.

For perspective, almost every one of the top 10 holdings in IWM has less than a 0.50% allocation. The top 10 holdings make up just over 4% of the ETF, compared to the S&P 500 ETF (SPY) whereby the top 3 stocks make up roughly 15%. Even more extreme is the Nasdaq 100 (QQQ), which has almost half its weighting in just a handful of names.

We’re also seeing a lack of confirmation at the sector level. Here’s a peek at our weekly Sector Momentum Report for All Star Charts Institutional clients. It contains a variety of data on 47 sector ETFs and indexes across all cap-segments as well as on an equal-weight basis. 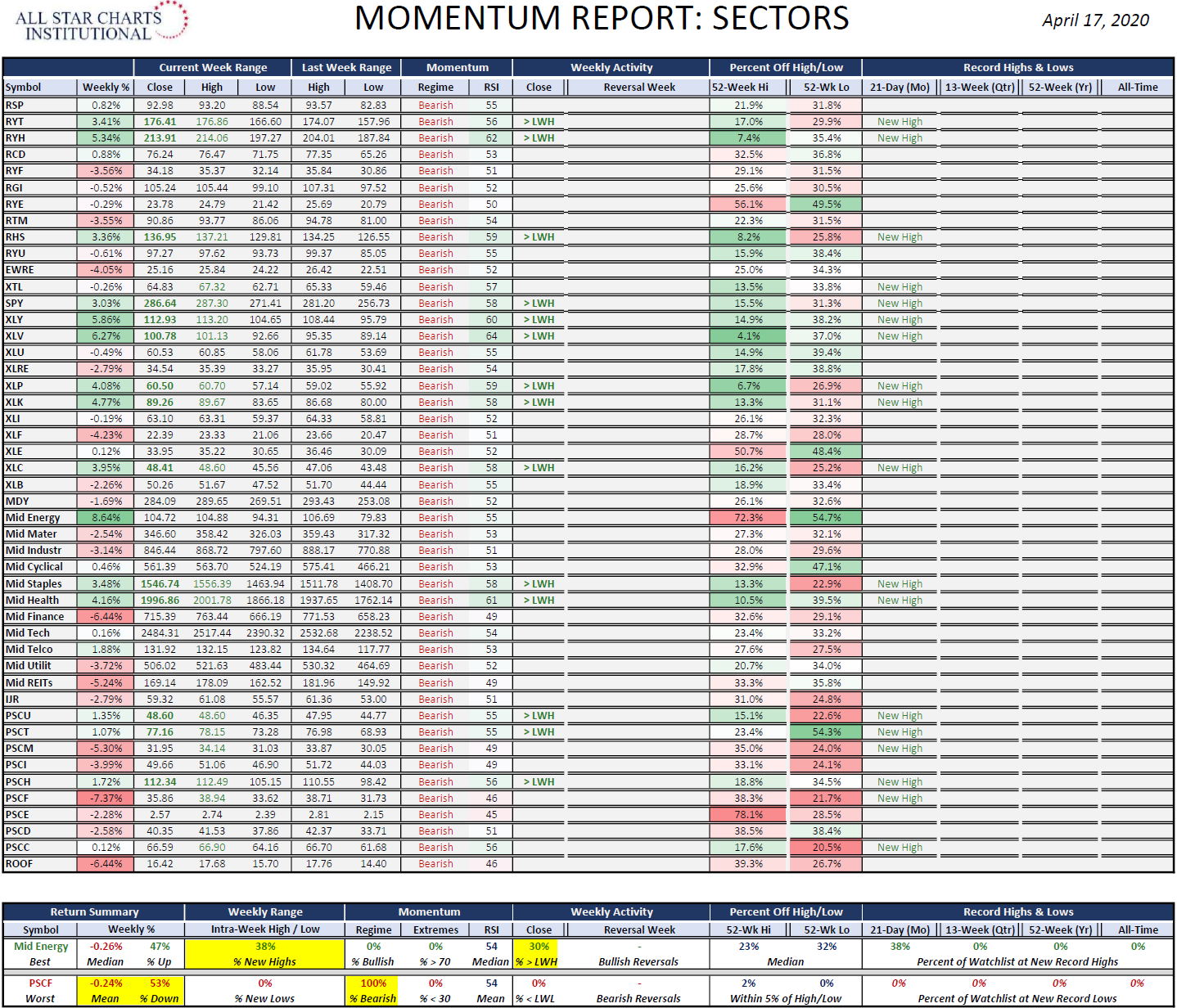 Focus on the summary at the bottom and the yellow highlights. This clearly illustrates the weak sector breadth as only 30% of our watchlist was able to close above their prior week’s high and an underwhelming 38% made a new intra-week high.

Despite the S&P 500 recording a 3% gain last week, the S&P Small-Cap 600 (IJR) and Mid-Cap 400 (MDY) both closed lower. The majority of sectors actually closed lower for an average loss of -0.24%. From a structural perspective, the picture remains bleak as well with 100% of our list is still in a bearish momentum regime.

Nothing about this makes us feel good about the new highs in large-caps last week.

Breadth is deteriorating even in the strongest segment of the market, other indexes are not confirming the recent highs and the majority of sectors are also making lower highs.

After a historic rally off of the March lows, we’re seeing an overwhelming amount of divergences right now. While divergences can always work themselves off through time, and the laggards could eventually make higher highs, based on the weight of the evidence our bet is that they won’t. We expect large-caps to catch down to small-caps and confirm these bearish signals as opposed to the opposite.

In a follow-up post, we’ll take a deeper look at the large-cap sectors to see where the strength and weakness is and what’s going on beneath the surface there.