There’s a common misconception out there that I feel somewhat obligated to clear up. You see, we pride ourselves here in analyzing the facts: price and what not. The problem with some in traditional (or even social) media is that they just repeat whatever they once heard. A great example is the notion that Gasoline prices rise this time of year due to the, “Summer Driving Season“. I don’t know who made this up, or why people continue to repeat this information. But most of us have heard this nonsense at one point or another.

Today we’re going to look at the facts and see if seasonally this actually is true, or if it’s all laughable. First let’s take a look at the past 10 years. As it turns out, not only is now NOT the time to be buying Gasoline, but it’s actually the worst possible time to be doing so throughout the entire year. The next 3 months are rarely ever positive and actually lose on average -8.4%, -4.3% and -3.8% respectively. 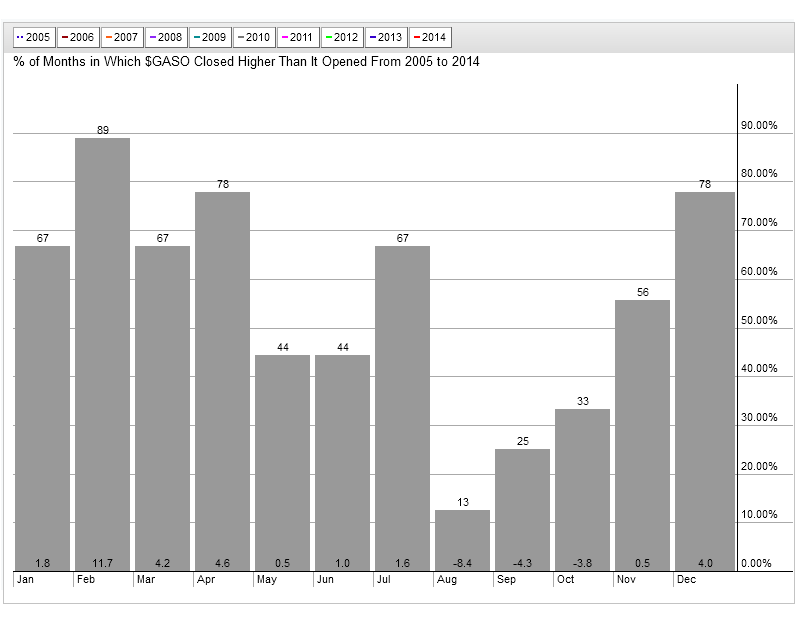 Here is the 10-year seasonal chart of Gasoline. It cannot possibly be more clear than this from a seasonal perspective. There isn’t a worse time to own Gasoline: 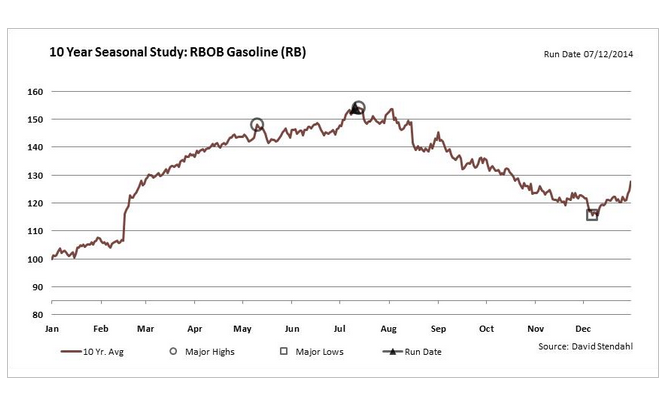 If you want to take it back further, here are the 20 and 30 year studies showing the exact same thing. Again, if someone tells you that this is the time to expect Gasoline prices to rise because of, “Summer Driving Season”, or whatever other excuse they want to bring up, feel free to bring up the facts. 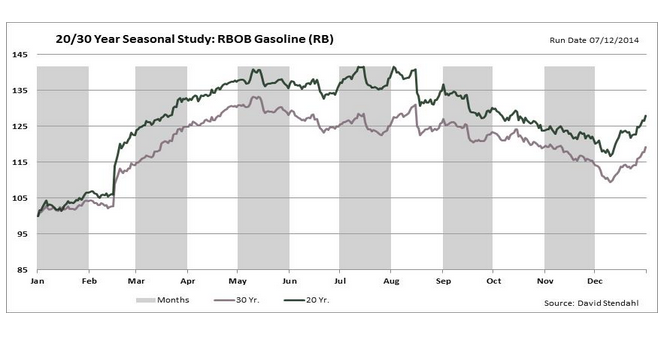 So if you’re going to own Gasoline today, it should not be because of what time of the year it is. You better have a good reason from an actual supply and demand standpoint. Personally, I don’t see much of an edge here from a structural point of view. Here is the weekly chart showing Gasoline exactly in the middle of a three and half-year range: 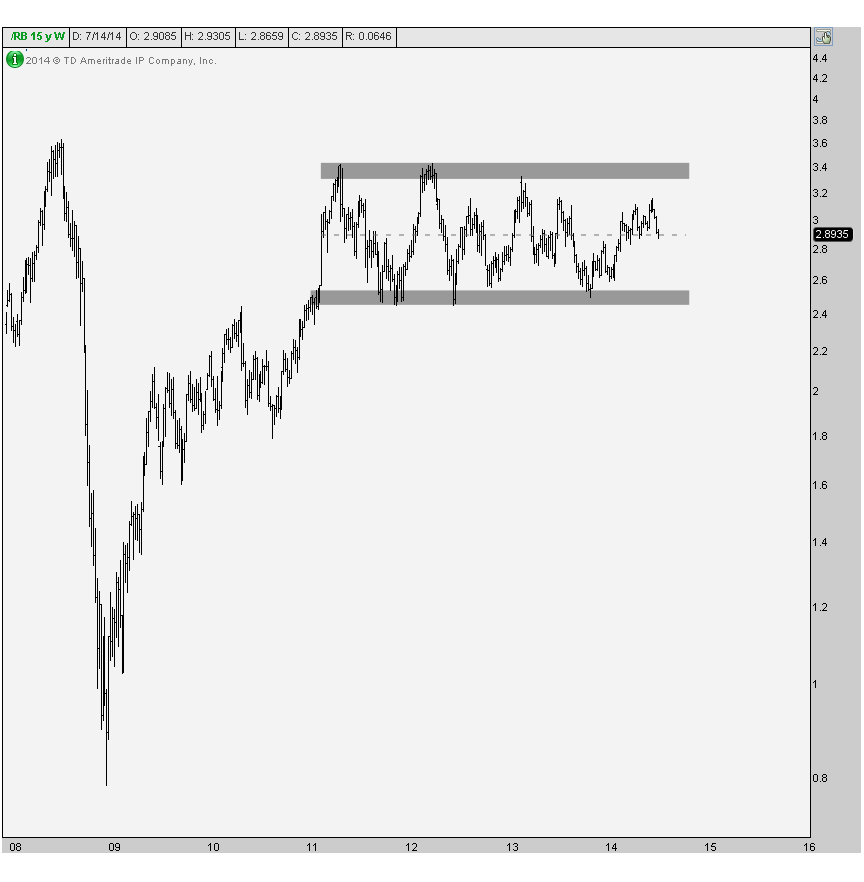 Finally we can take a look at some shorter-term charts of Gasoline to see if there is any tactical advantage to being long here in the near-term and fight the seasonal trend. The first chart shows sentiment levels still relatively optimistic, although off the recent extremes. No reason to own this from a sentiment perspective either: 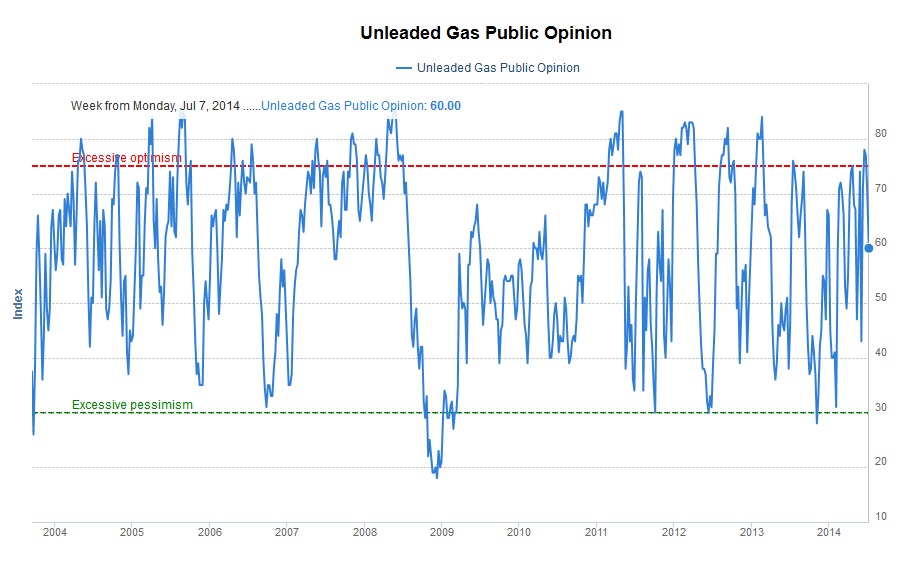 Here’s the daily candlestick chart. This is the one aspect of this whole thing that I can say something slightly positive about. After prices broke down at last year’s resistance, which is very normal, we’ve overshot the 200 day moving average and uptrend line from last Fall. These overshoots can often create short-term buying opportunities. In this case, if you have to be long I’d really only want to be above the 200 day moving average and or broken uptrend lines. This can create a nice reversal back up towards last month’s resistance. That’s not anything to brush off in my opinion. 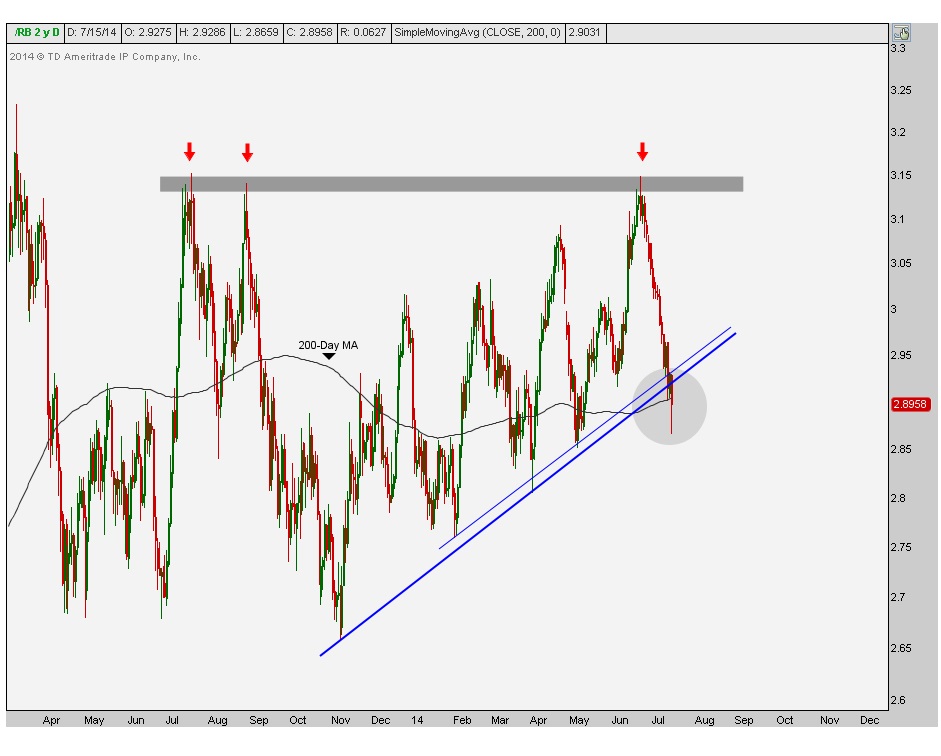 But even still, I think we’re pushing it as structurally there isn’t anything there. At least not yet. So just to reiterate, I’m not suggesting to short sell Gasoline and I’m certainly not suggesting owning it on an intermediate term basis. All I’m saying is that if you want to own Gasoline, do it. Just please don’t let it be because of the seasonality of it. In fact, if you are buying this here, you are fighting the seasonal trend and are essentially swimming against the current. If you’re cool with that, go for it. Just don’t let a good story get in the way of the truth.

REGISTER HERE for more information on how to access these Gasoline charts with annotations and commentary on a weekly basis. We will have an announcement on this new product within the next 2 weeks.