The first chart is Gold from a longer-term perspective. You can see the major top in 2008 and the successful breakout and retest of that level in 2010. After the peak in 2011, prices came all the way back towards that former resistance and support to ultimately find a bottom last January. This retest sparked a counter-trend rally towards 1380 last Summer. It’s been dead ever since. 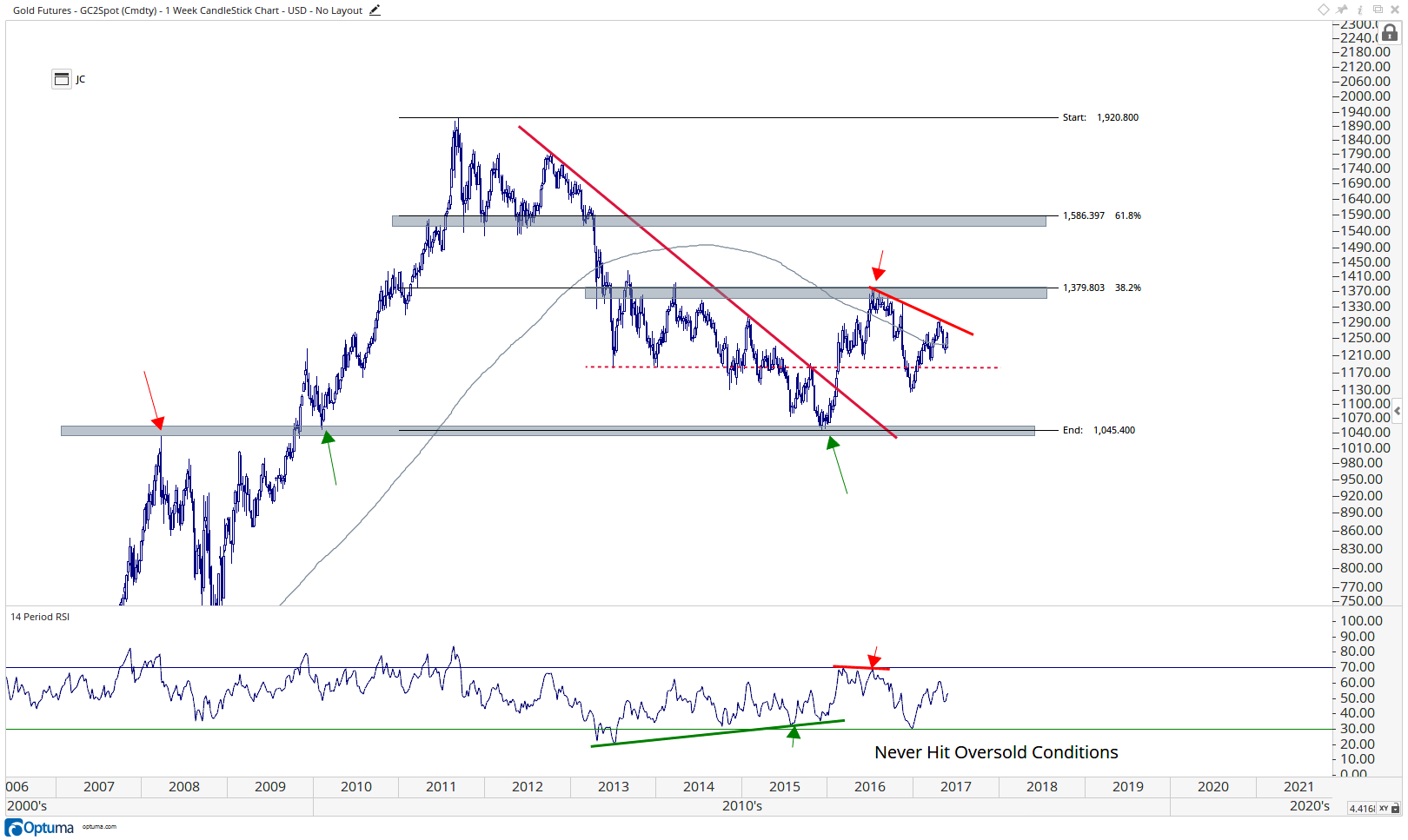 Now here is gold in the short-term. Please find me a hotter mess. We’re right near a flat 200 day moving average, which if you know me, that means run away, don’t walk away. Even if we do rally here, we have to worry about all of that overhead supply around 1300 that goes back to early 2015. There is no reason to be involved in this mess from the long side: 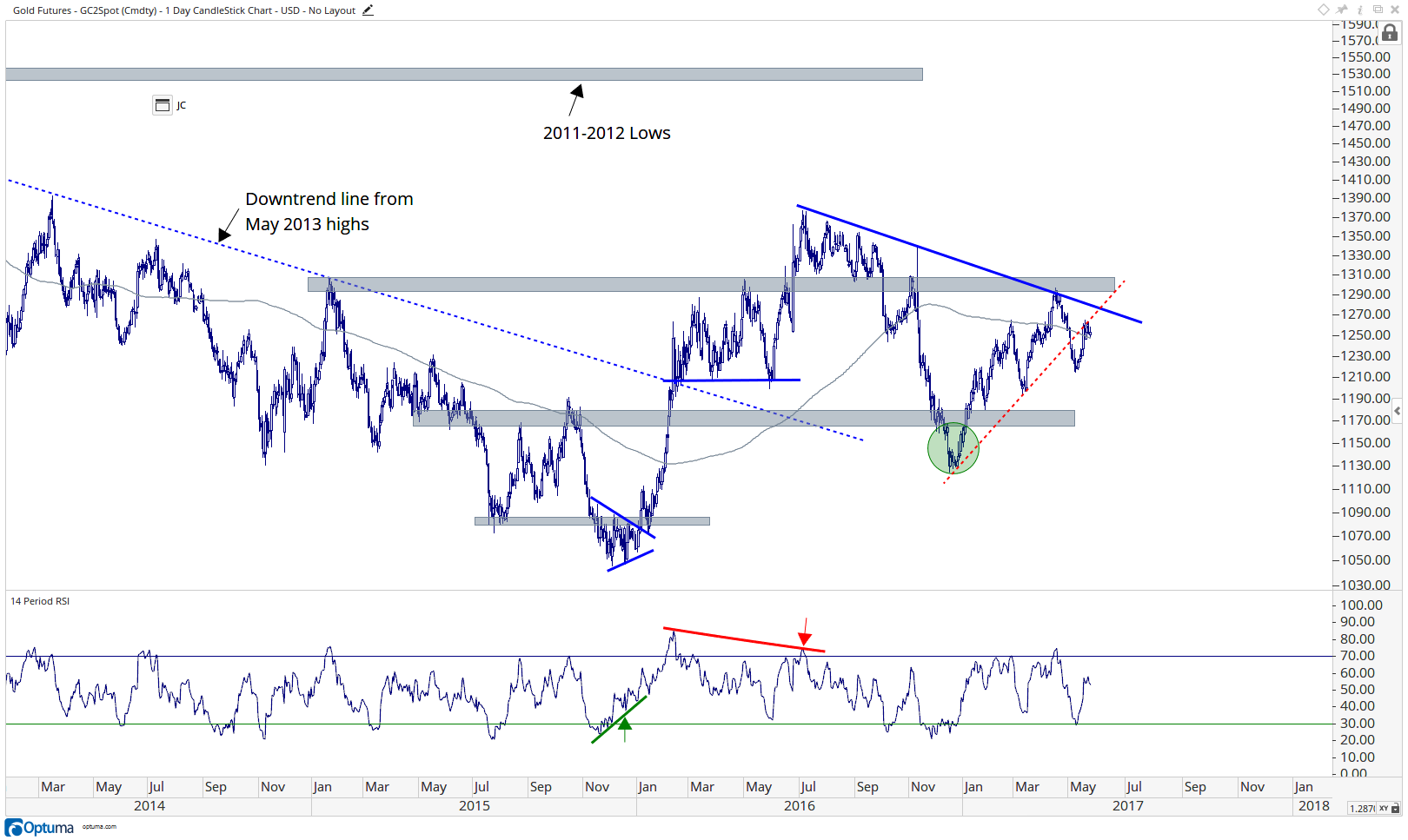 I suppose this pattern could resolve higher, but it’s not going to be something I want to be betting on. Momentum hit oversold conditions on this decline, which is a bearish characteristic, not a bullish one. So even if we do rally here, which I think is the lower probability outcome, then we still run into resistance near $18. This is still a fade: 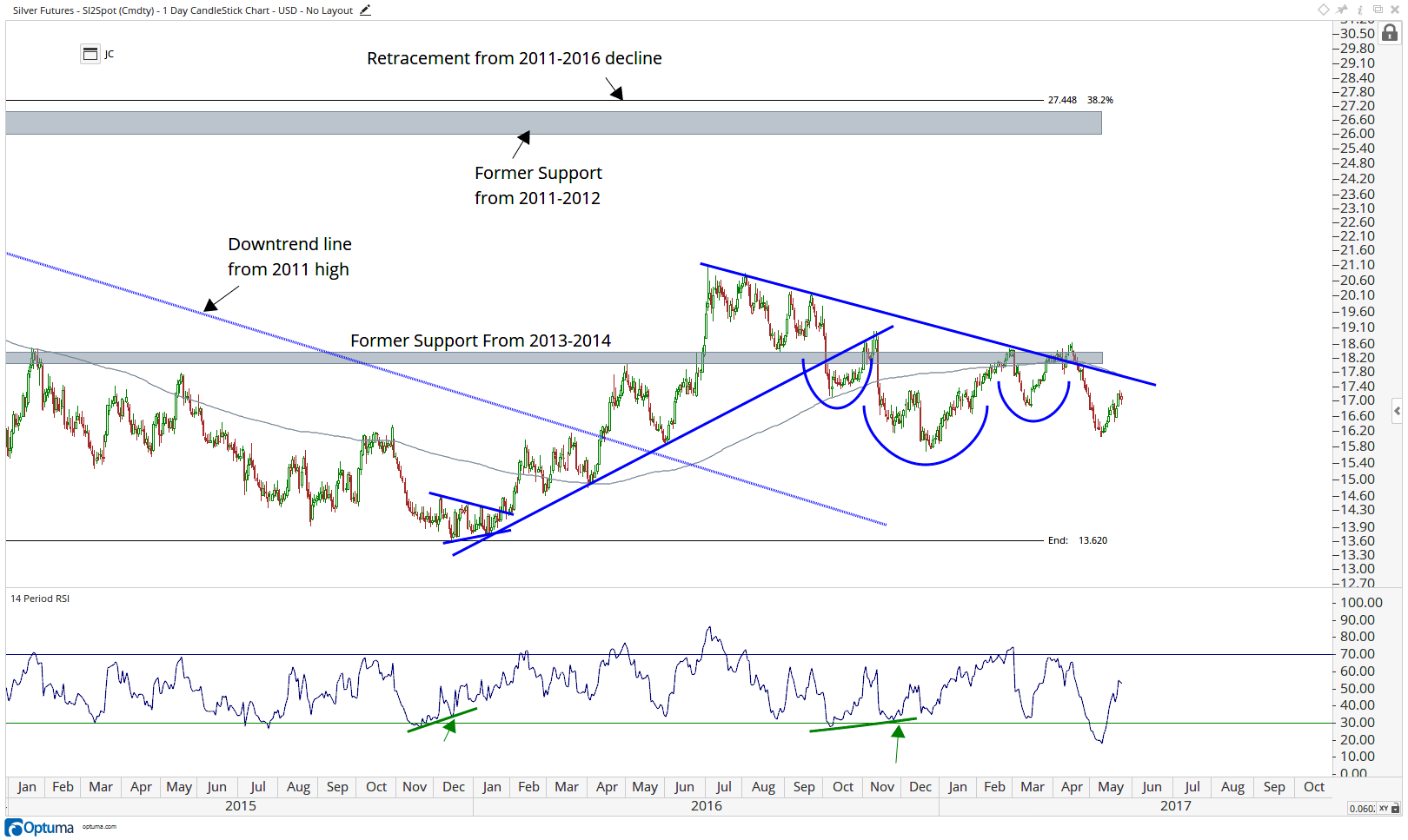 Here is a chart I always like to reference. This is an equally-weighted index of Gold, Silver and Platinum. It really helps gives perspective on risk appetite for precious metals. We’re flirting with an important trendline going back to the 1999 lows. There is certainly overhead supply on any strength, so at best it goes no where for longer. Worst case scenario this trend breaks and the downtrend from the 2011 high resumes lower. It’s too early to make that kind of call right now. But it’s important to lay out the options. 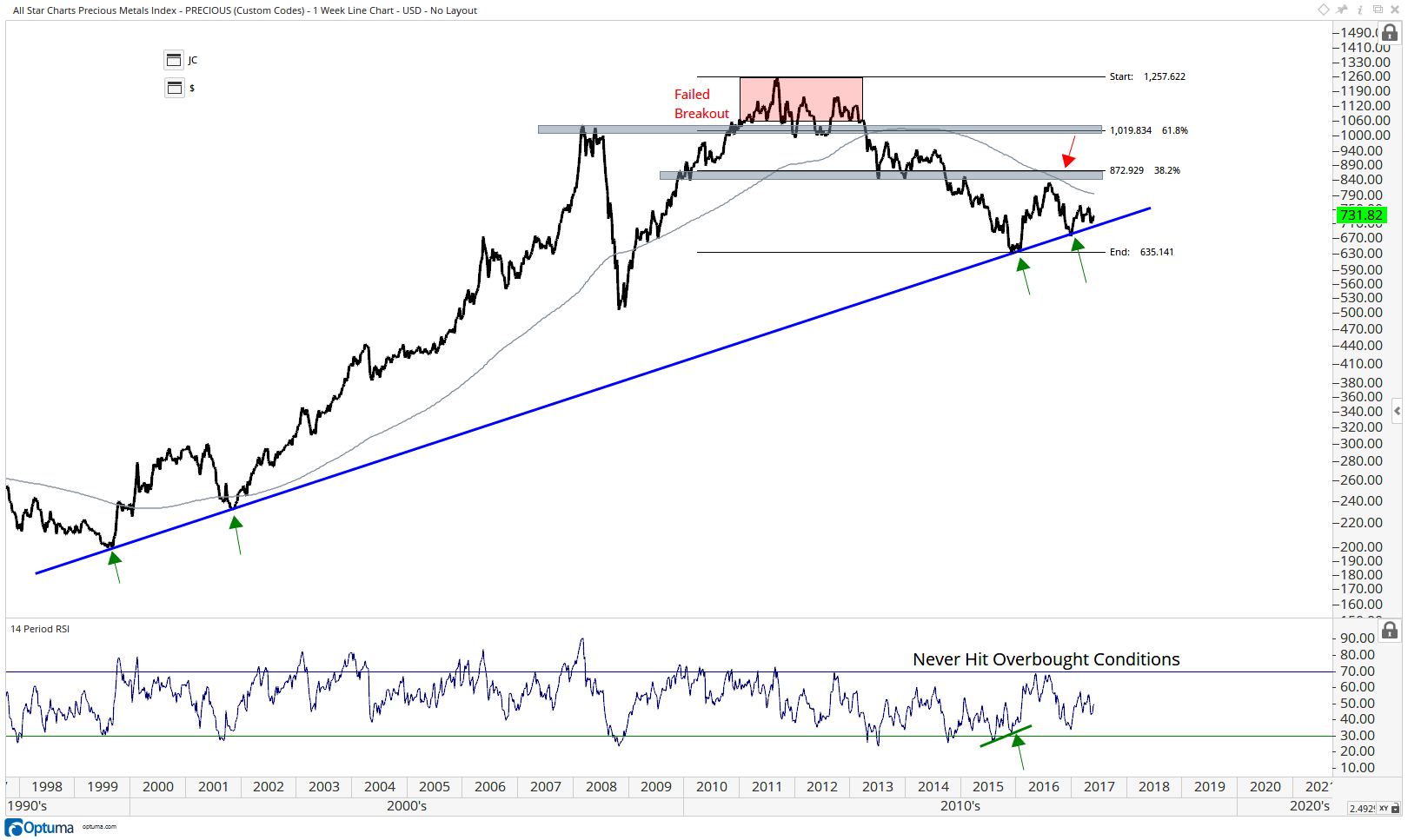 The Gold chart that screams “HOT MESS” the most is probably the Gold Miners Index ETF $GDX. This is still below a downward sloping 200 day moving average, below downtrend lines from the 2016 highs and from the February 2017 highs. Even if we do break out here towards 26, which I think is the much lower probability outcome, there is still overhead supply that’s been resistance since 2014. This is ugly: 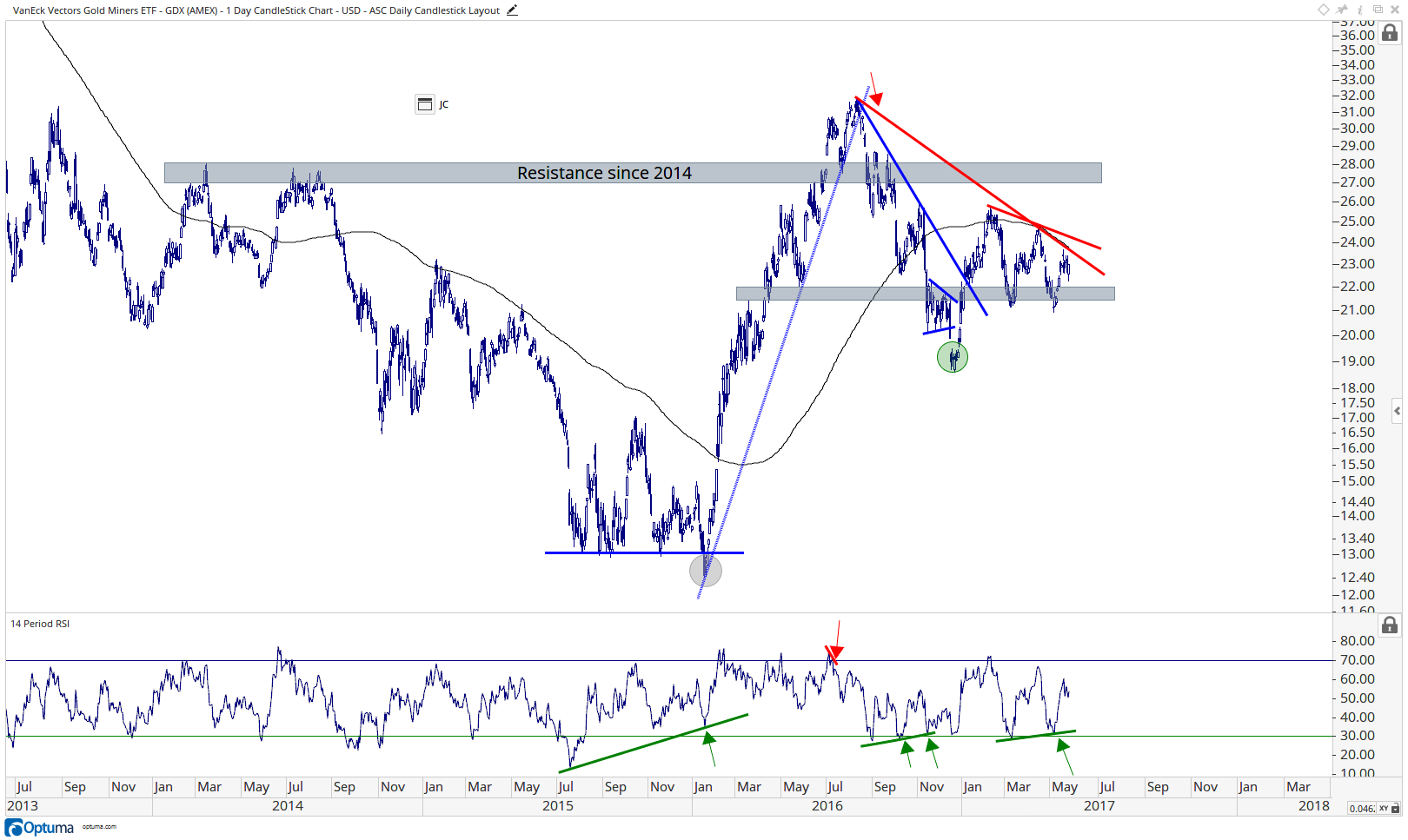 A good tell to see if the precious metals space is going to be a good short once again is whether or not the PHLX Gold Silver Index holds on to this support near $78. If this breaks, in all likelihood precious metals are going a lot lower as a group: metals and stocks: 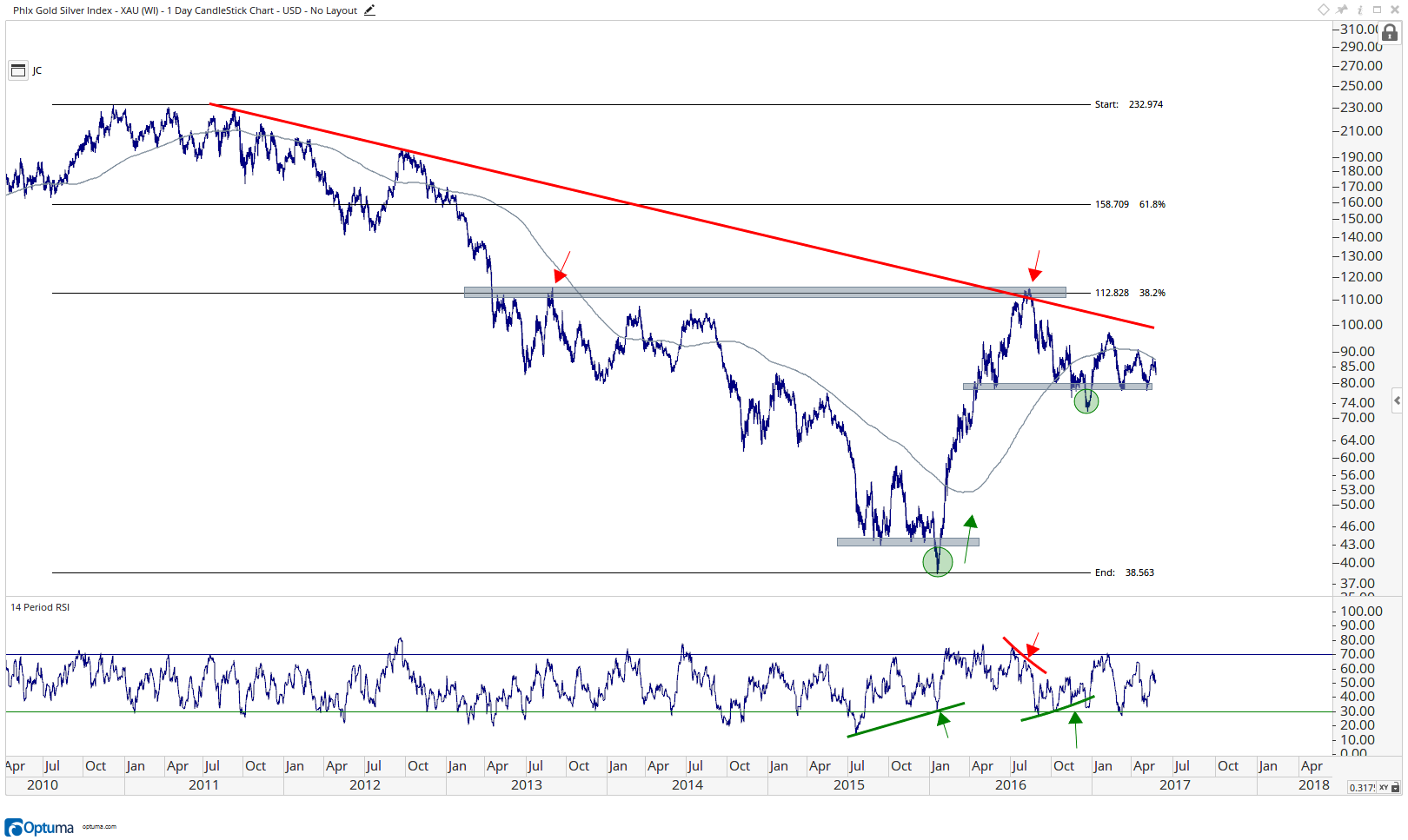 Here is an equally-weighted index of Gold Miners that I created. It’s the 20 largest gold and silver companies each represented equally. This is a mess. That failed breakout in the second half of last year really stands out. That was above a downtrend line from the 2011 highs and former support in 2010 & 2012. 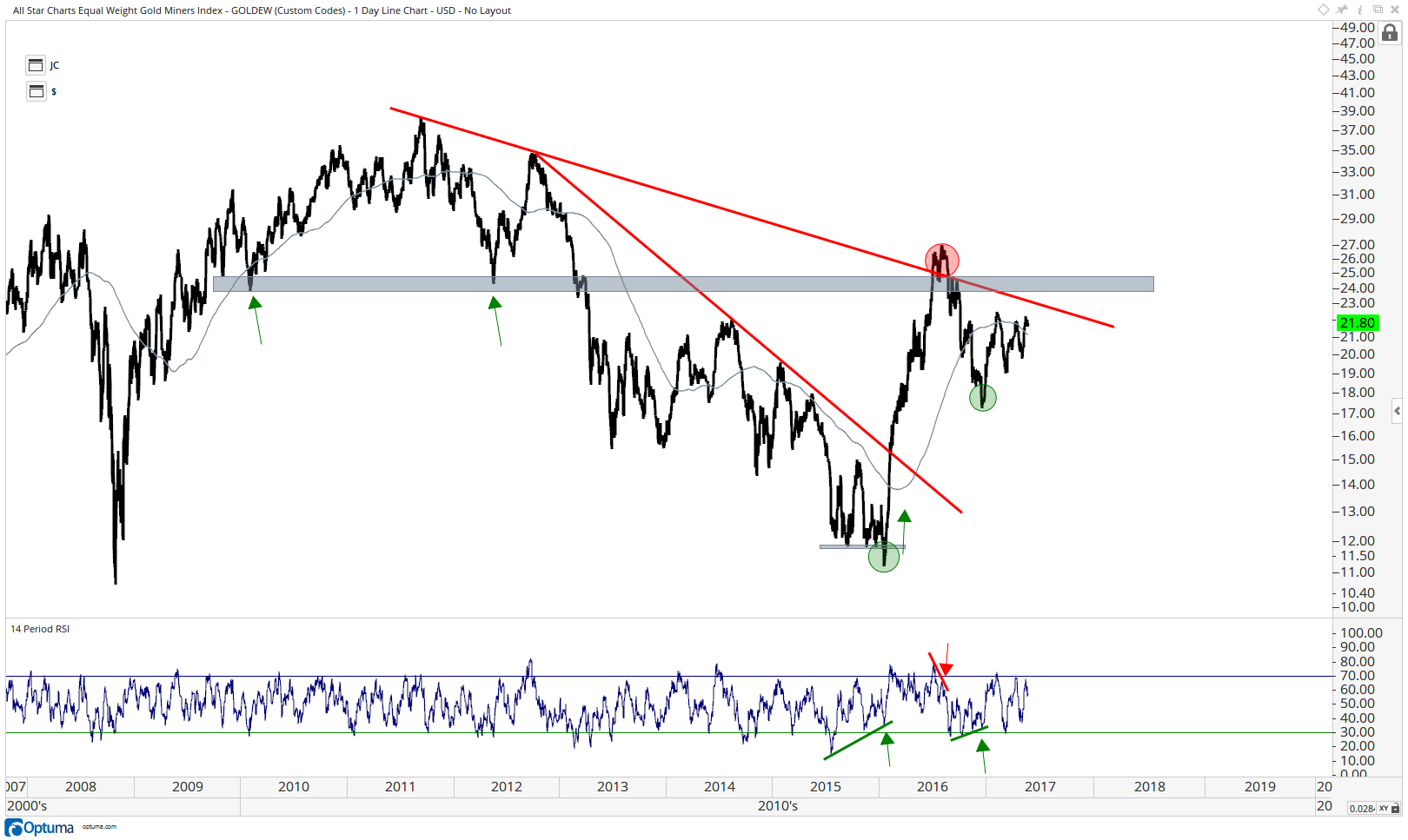 There is so much overhead supply that it makes me sick. The higher probability outcome here is sideways or lower. The only remedy here is time. So we’re better off just not being long gold and silver. That’s how I see it.

One of the big daddy’s Newmont Mining looks like a great tell here. This to me looks like a higher probability of a downside break than an upside break. With that downward sloping 200 day moving average….it’s ugly. I would need to see a decisive break above 38 and an upward sloping 200 day moving average before getting involved on the long side. So to me it’s either a no touch or a short. I think if we’re below the uptrend line from those November lows then we can be short to take advantage of a more severe break. But if $NEM is above $32.25 then it’s a no touch.  It can probably go to $27 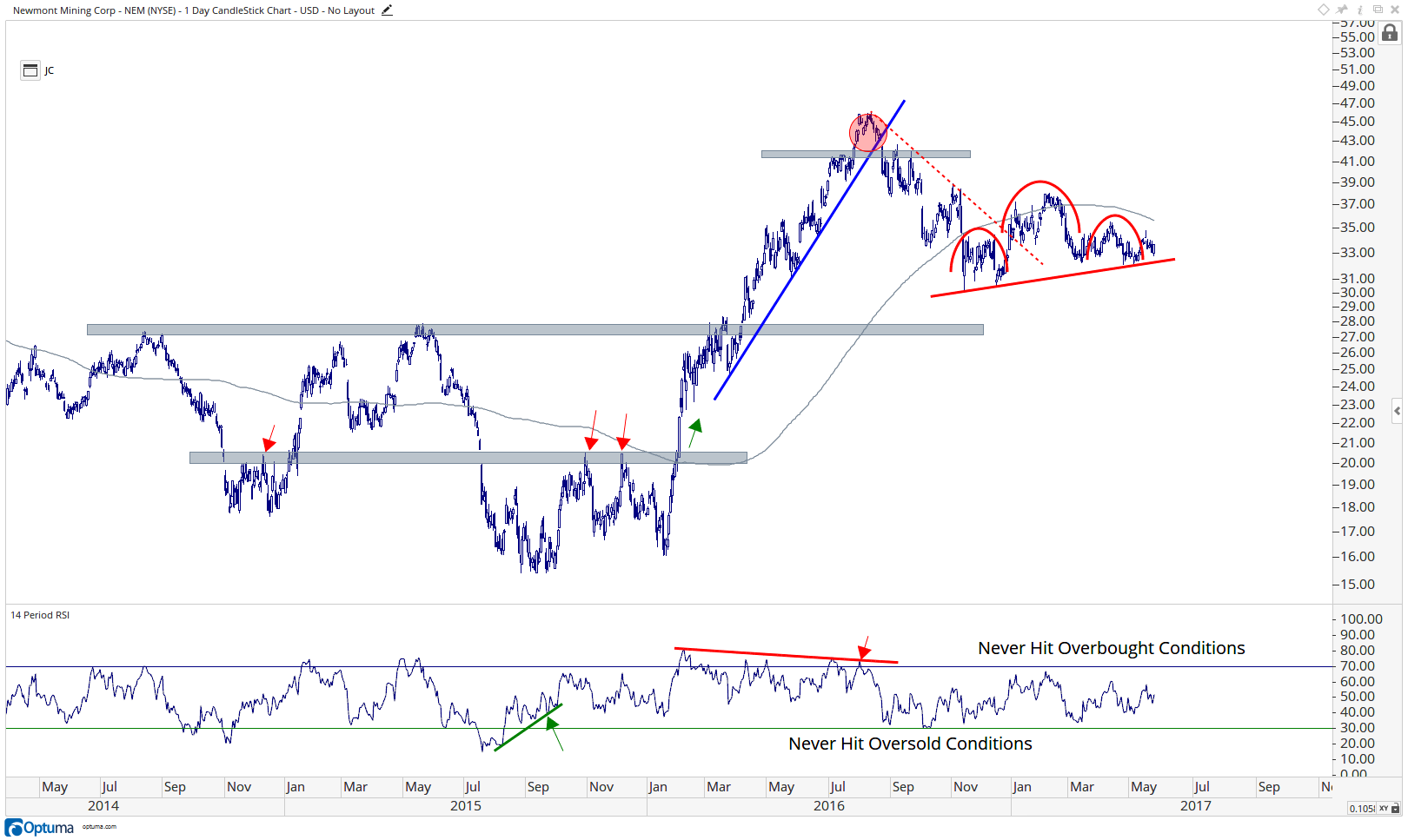 A standout in terms of relative strength is certainly Franco Nevada. This Royalty Stock hit the highest levels since last September this week. This is a lot more than I can say for the rest of its peers: 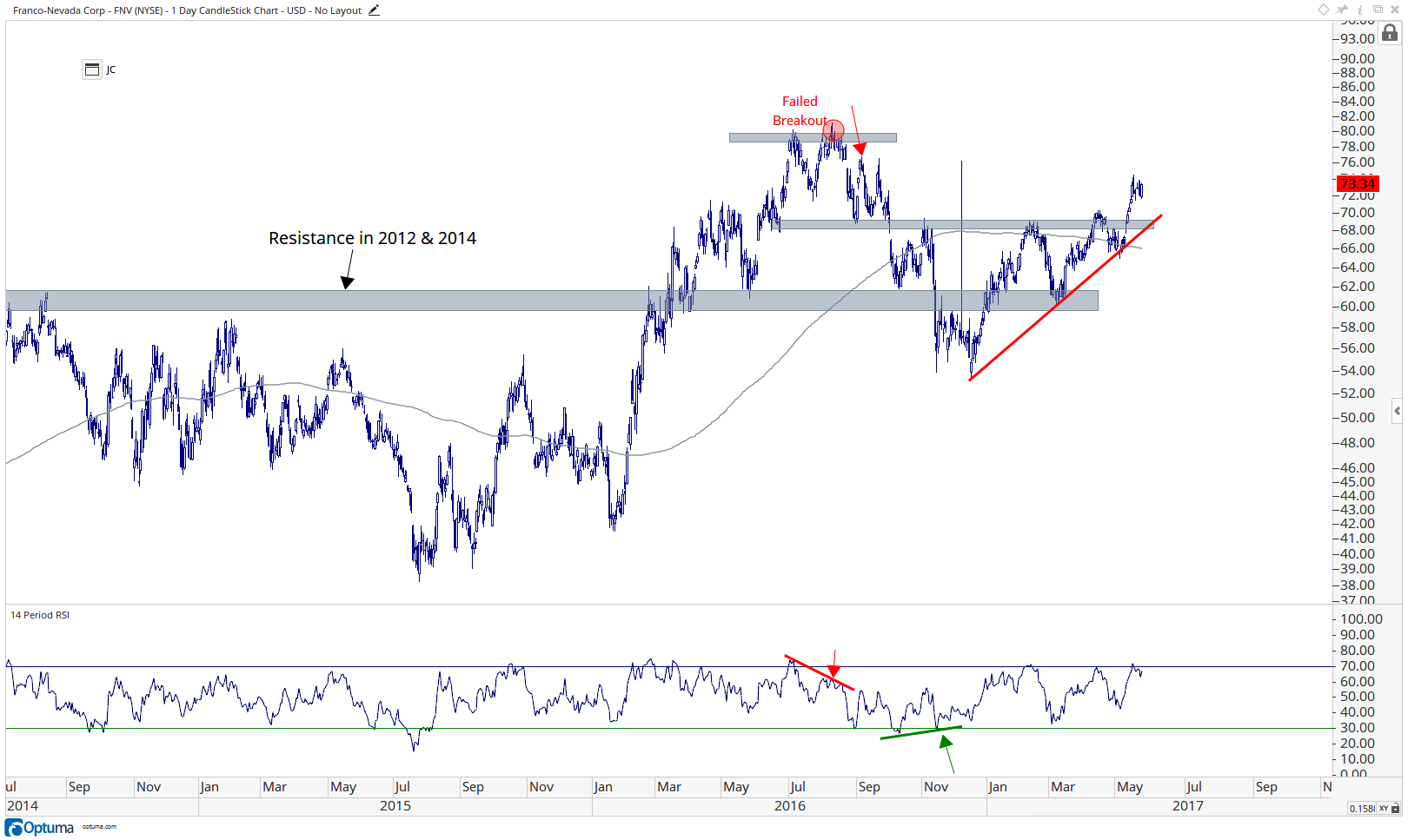 Here is Gold relative to the S&P500. In other words, the answer to the Gold or Stocks question. This is still a downtrend. Ever since that nasty failed breakout in 2011 it’s been all downhill: Stocks over Gold. If this ratio breaks above it and consolidates further then maybe we can talk about a change in trend. But the higher likelihood is a continuation of this trend which is lower. A break below 0.5 in this ratio and we’re likely to see an acceleration of selling, or Stocks winning some more over Gold. 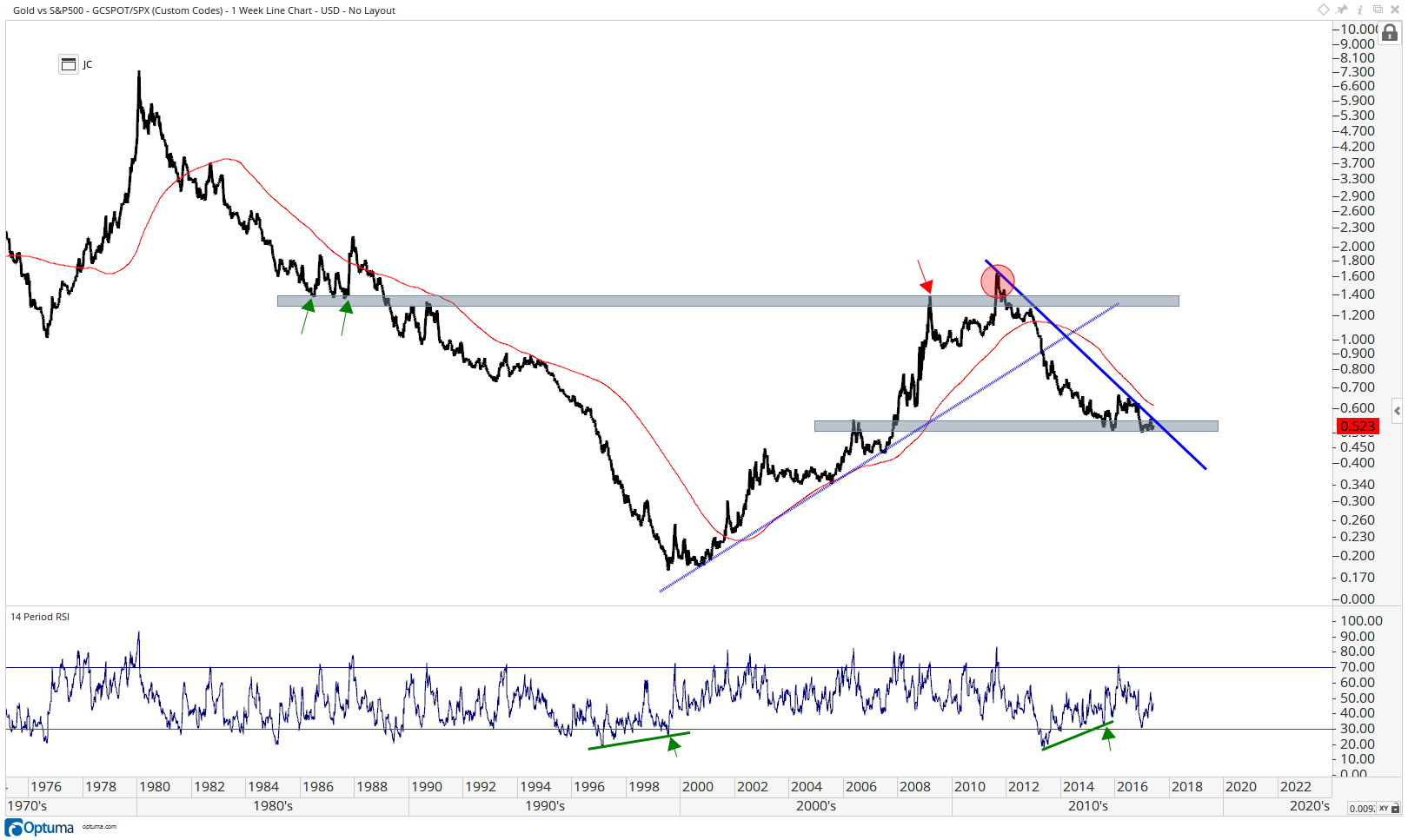 Here is a shorter-term look at that ratio. To me the higher probability is we go lower. A break of this support should just about do it. That looks like another 20% lower, which means the S&P500 would dramatically outperform Gold moving forward upon this break:

An interesting ratio that I can’t wrap my head around is the Gold vs Platinum line. Look how we literally kissed the 161.8% extension of the 2012-2014 decline and it has not been able to surpass it since. Is this a massive continuation pattern that is about to explode higher? Or was that the failed attempt and down we go. I’m not sure. But it’s worth watching to see how this sets up. 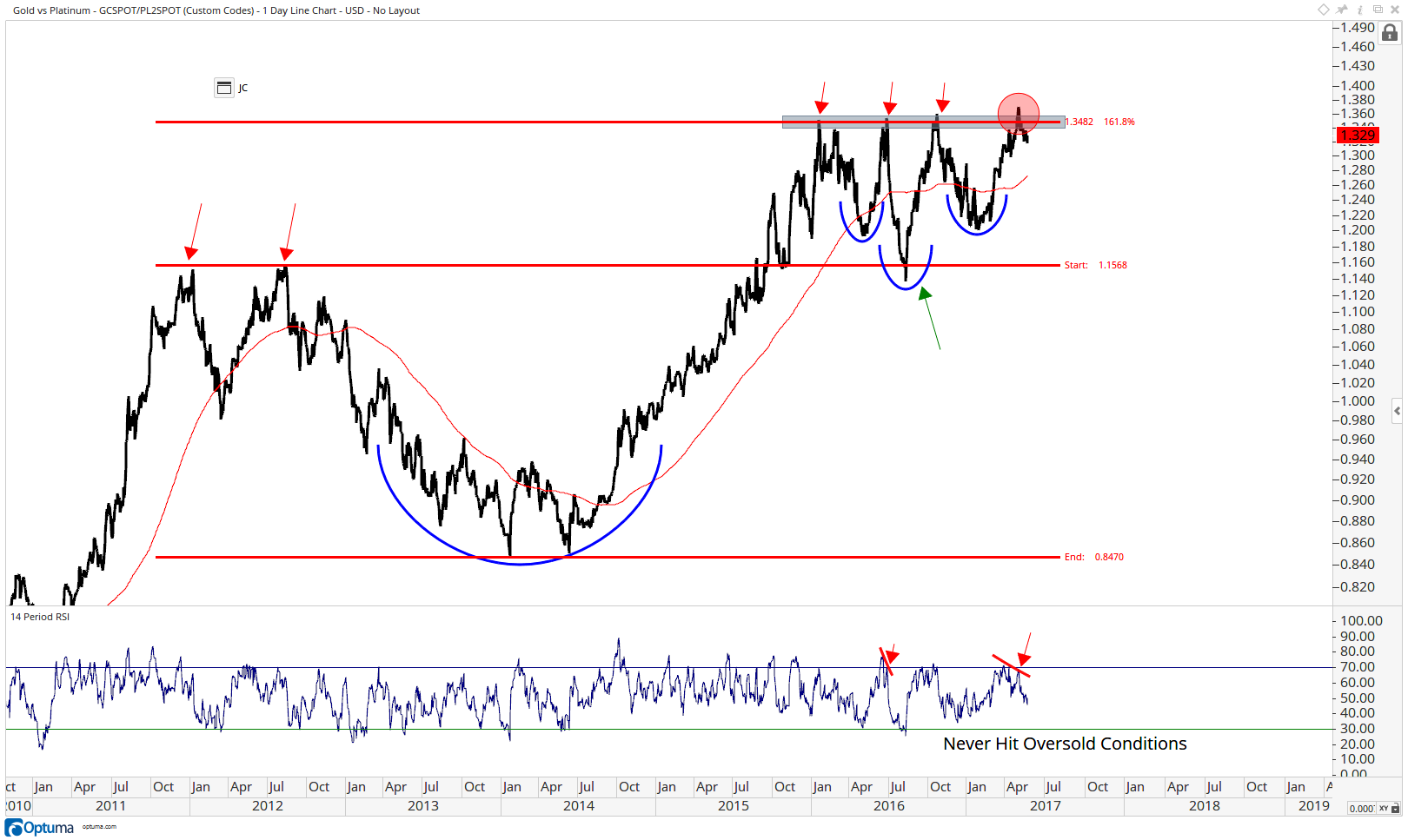 In general, we’re just not seeing uptrends in gold or gold stocks. We’re seeing plenty of uptrends in a lot of other places. So it simply becomes a question of whether you want to get cute and try to pick bottoms in strong downtrends or you if you’d rather participate in things that are already working. I prefer the latter.

You can see the entire list of precious metals charts in the Gold Workbook.