The market has been a choppy mess for months.

Unless you’ve been stuck under a rock or at the beach all summer, this is old news. And we’ve admittedly been a bit obnoxious when it comes to rehashing this theme. But usually when we find ourselves harping on something, it’s because it’s a big deal.

Our own behavior can be fantastic information, and it’s become a part of our process to pay special attention whenever we begin to repeat ourselves a lot.

This week is no different, as the US Dollar Index $DXY provides another example of the market’s sloppy state of affairs.

Just when we thought we might finally have some decisive price action in the Dollar, Friday’s attempted breakout followed by Monday’s weakness is casting some serious doubts.

Was last week’s breakout above the March pivot highs valid?

Or was it just another failed move to add to the market’s growing list of whipsaws and fake-outs?

Let’s take a closer look at the US Dollar Index to analyze recent price action and recap what the potential outcome of each scenario could mean for the broader market.

Below is a daily candlestick chart of the DXY: 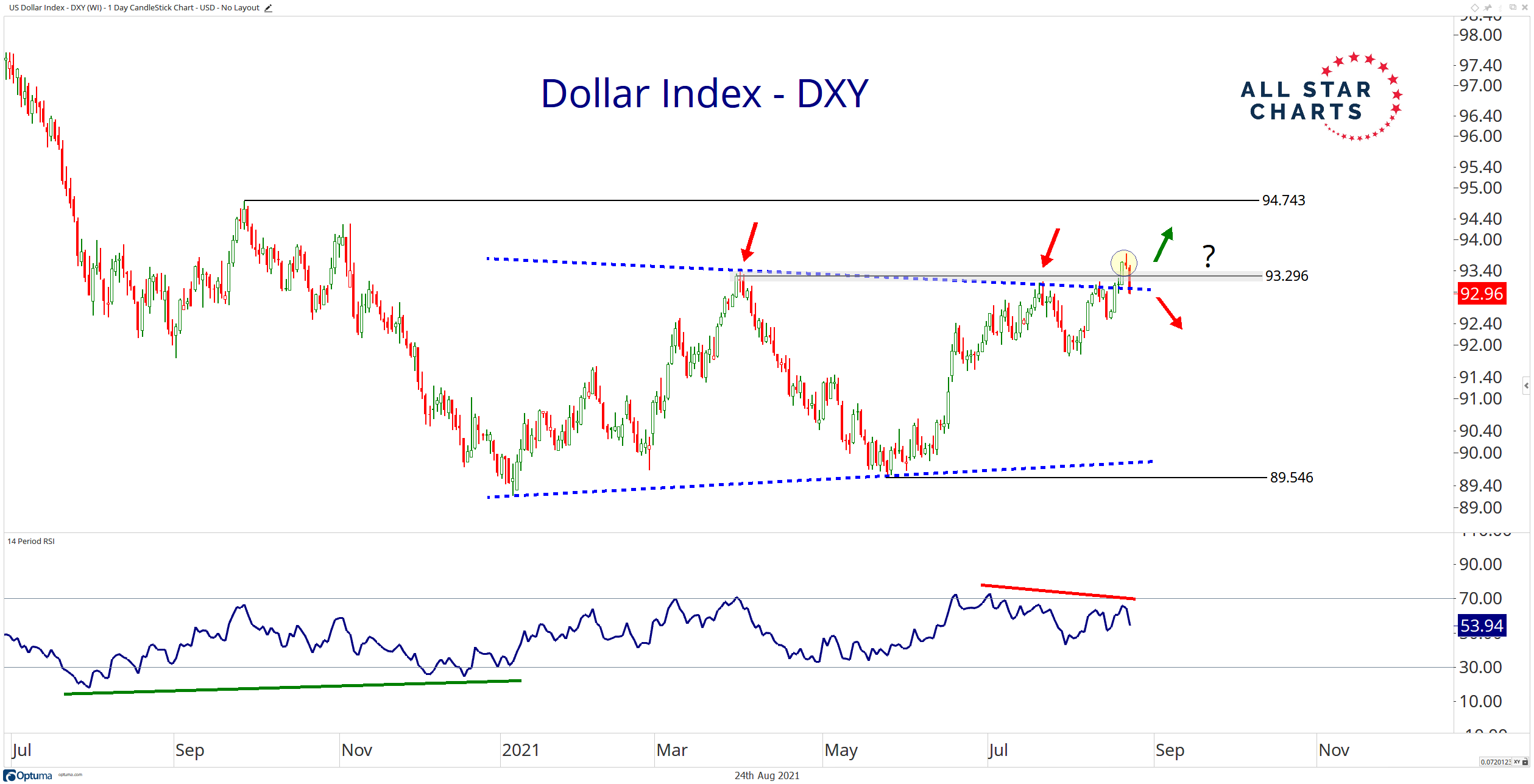 There are two ways to view price action since last Thursday: a potential failed move or a hard retest of the breakout level.

The case for a failed breakout is simple.

Bulls lacked conviction heading into the weekend after they came out on Thursday and pushed price to 10-month highs.

Conversely, bears made their presence known with a “shooting star” candlestick Friday, illustrating strength from sellers into the close with its long upper shadow. That weakness was confirmed yesterday when sellers stepped in to drive price back below the breakout level of 93.30.

When we add the bearish momentum divergence to the mix, a bullish stance on the dollar looks even less inviting.

If this is a failed breakout, we’ll know by the end of the week. While it isn’t shown in the chart, we saw more follow-through from sellers today, making us lean in favor of the failed move camp.

And as the saying goes… from failed moves come fast moves in the opposite direction.

What would this mean for risk assets?

A swift drop in the USD would create a tailwind for stocks and commodities, given their high negative correlation during the past five years.

On the flip side, this could just be a hard retest of the breakout level.

If this is the case, we would expect to see a tight consolidation around 93 as price works off some overhead supply before resolving higher.

It would also mean further downside pressure on equities and other risk assets around the world.

Of course, there’s always a third option too… that’s sideways. Price action could simply be messy for longer. That’s been the case so far this year, so it really shouldn’t come as any surprise.

There’s no evidence the environment has changed. Some risk assets are going up, and some are going down. But most are just a range-bound mess. And maybe that will remain the case for the Dollar for even longer.

Stay tuned, as we’ll be sure to update you next week as things change.

Premium Members can check out this week’s Currency Report below.