For me, this is a really important chart at a critical juncture. We’re looking at Stocks vs Bonds: Where would we rather be?

After battling with 6 months of resistance (in blue), the Stocks to Bonds ratio broke out to new highs in early March. That was a ton of resistance that was finally cleared. But since topping out later that month, the ratio is back currently retesting that broken resistance. The laws of polarity tell us that this level should become support on any retests. And here we are, so let’s see. But to add to the potential support, we also have an uptrend line connecting all of the lows since early October. Both of these together force me to give stocks the benefit of the doubt: 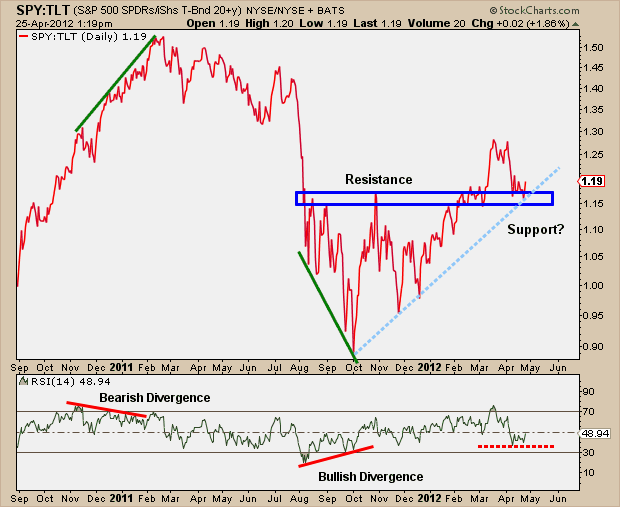 Now let’s look at momentum. Go back to late 2010/early 2011 when $SPY:$TLT was making higher highs in price, but the Relative Strength Index (RSI) was rolling over. This bearish divergence came well in advance of the big decline in price. But then the opposite occurred last Fall. With prices making fresh lows into October, RSI was putting in a higher low. This bullish divergence came just before the major rally that we’ve seen ever since.

So what is momentum telling us now? I see nothing but bullish characteristics. The overbought conditions in RSI for March are normal in uptrends. Furthermore, as prices are currently testing potential support, RSI is down to the lowest levels possible while still being in Bullish mode. So when I said ‘critical juncture’ before, I really meant it for both price and momentum.

Now, for risk management purposes, I would definitely have to reevaluate that position if the early March lows in this ratio are taken out to the downside. This would tell me that the former resistance did NOT become support and that the uptrend from October is now broken. I would NOT want to be long this ratio in that particular scenario.

But for now, until proven wrong, I would stick with stocks here over US Treasury Bonds.