This has been one of my favorite trends over the past month: Long US / Short Ho Chi Minh. I’m not really sure what’s going on over there, but they’ve been a serial underperformer for months. And sure, there have been plenty of those underperforming nations so far in 2013, most of them actually. But the chart of the SPDR Dow Jones Industrial Average vs the Market Vectors Vietnam has just been clean. I love that. Edwards and Magee back in the 1950s would have definitely been proud of this one.

Here is $DIA vs $VNM coming out of that triangle-looking consolidation pattern: 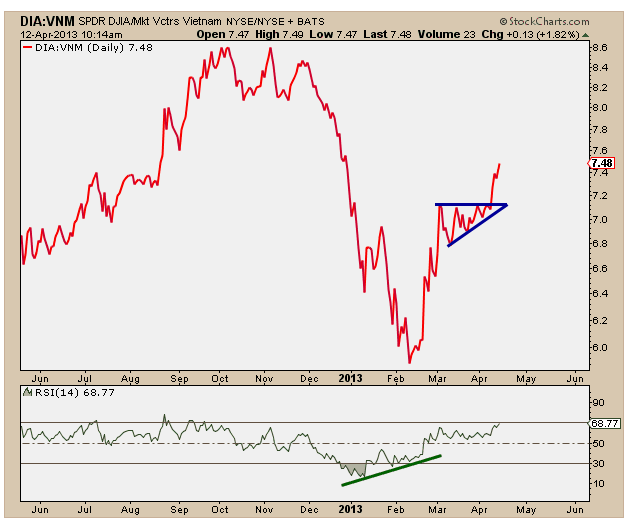 As you can see, this monster rally got going after a bullish divergence was put in earlier this year. Fresh lows were made in the pair coming into February while momentum was already turning higher. Looking at each of them individually, it’s easy to see why.

The measured move on something like this is about a buck and a quarter, which is the original move that took it up into the consolidation. Take that and add it to the breakout this week, and you have a pretty aggressive price target up near 8.40

Like I said, the individual setups looks nice, but the pair is what gets me. We obviously want to see this week’s breakout hold for us to continue to like it, but the trend here is higher which puts odds in our favor.

We first mentioned this a few weeks ago in an end of Q1 video that Phil and I did together, check it out.