A big theme for me this year has been the US Dollar and how it will impact stocks as an asset class. The thought process coming into 2019 was simple. The Dollar had rallied throughout 2018 to reach some pretty critical levels. The idea was that if the Dollar was going to rip right through there, it was more than likely happening in an environment where investors would be fleeing to safety. That’s the type of market where stocks are selling off. The opposite of that argument was that if the Dollar was not breaking out, that stocks would likely be doing well, both in the U.S. and more importantly globally.

Fast forward to today, almost 1/3 of the way done with the year, and stock have performed very well. In fact, as Piper Jaffray’s Craig Johnson mentioned in this week’s podcast, stocks have had an incredible entire year already, just a few months in. Look what the US Dollar Index has done during this period: Nothing. 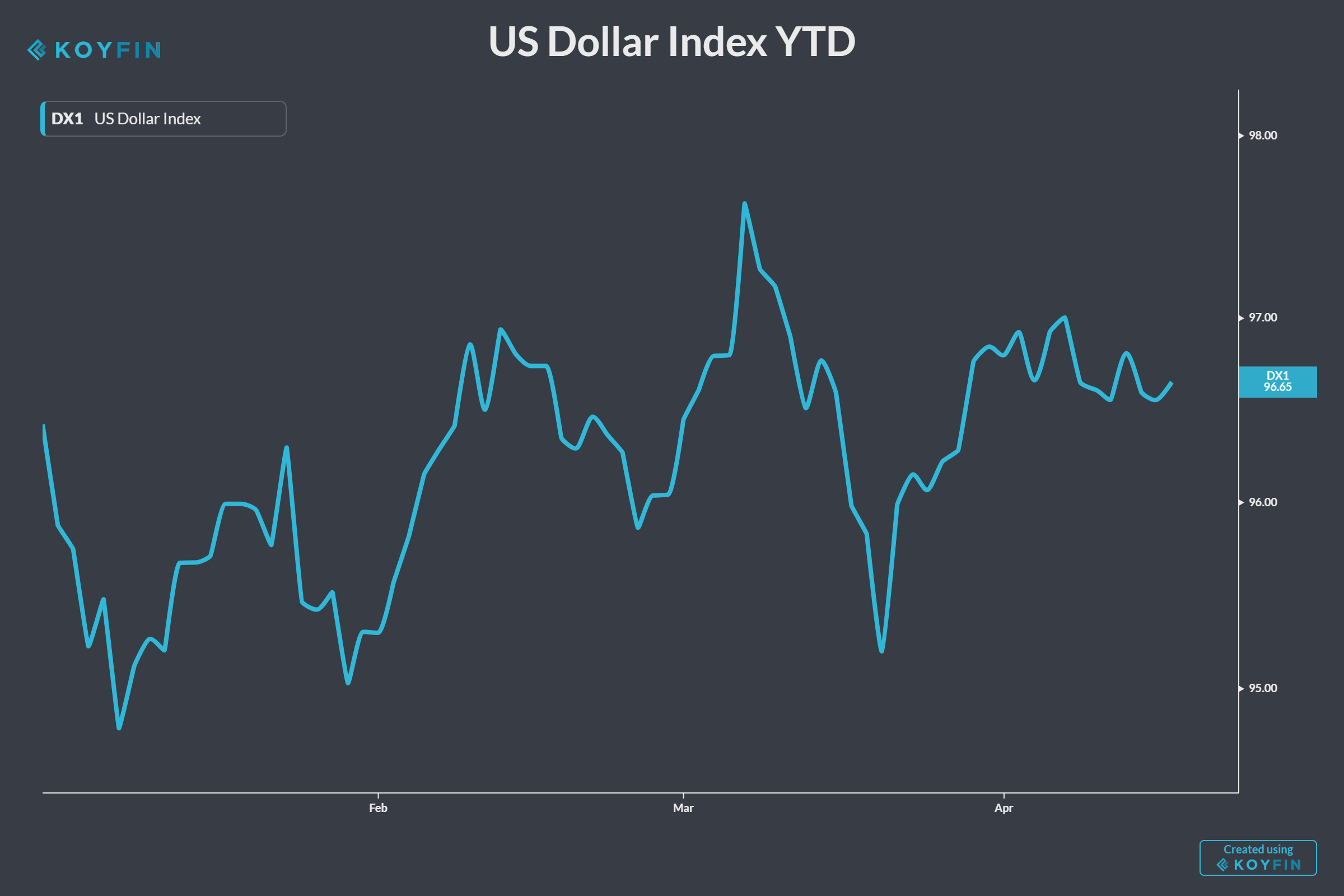 The Dollar remaining below key resistance has been a positive for stocks, which we felt was the higher probability coming into the year. But that doesn’t mean things have changed. I think now more than ever we need to monitor what’s going on in the Dollar. The data coming in the past few months has only validated our original thesis further. I don’t think it’s time to abandon it now!

Here is that key level we’ve been watching since the end of last year. It’s the 61.8% retracement of the entire 2017-2018 decline. If you recall, this was just after the brilliant writers at the Economist put George Washington on steroids on the cover. I still laugh about that. The Dollar immediately started its collapse after that publication was released. Since the bottom early last year, the Dollar rallied and stocks struggled, particularly around the world outside of the U.S. This sideways range throughout 2019 has contributed to strength in stocks, again, especially in Emerging Markets.

So does the Dollar roll over here, stocks continue to catch a bid, and Emerging Markets keep on outperforming? 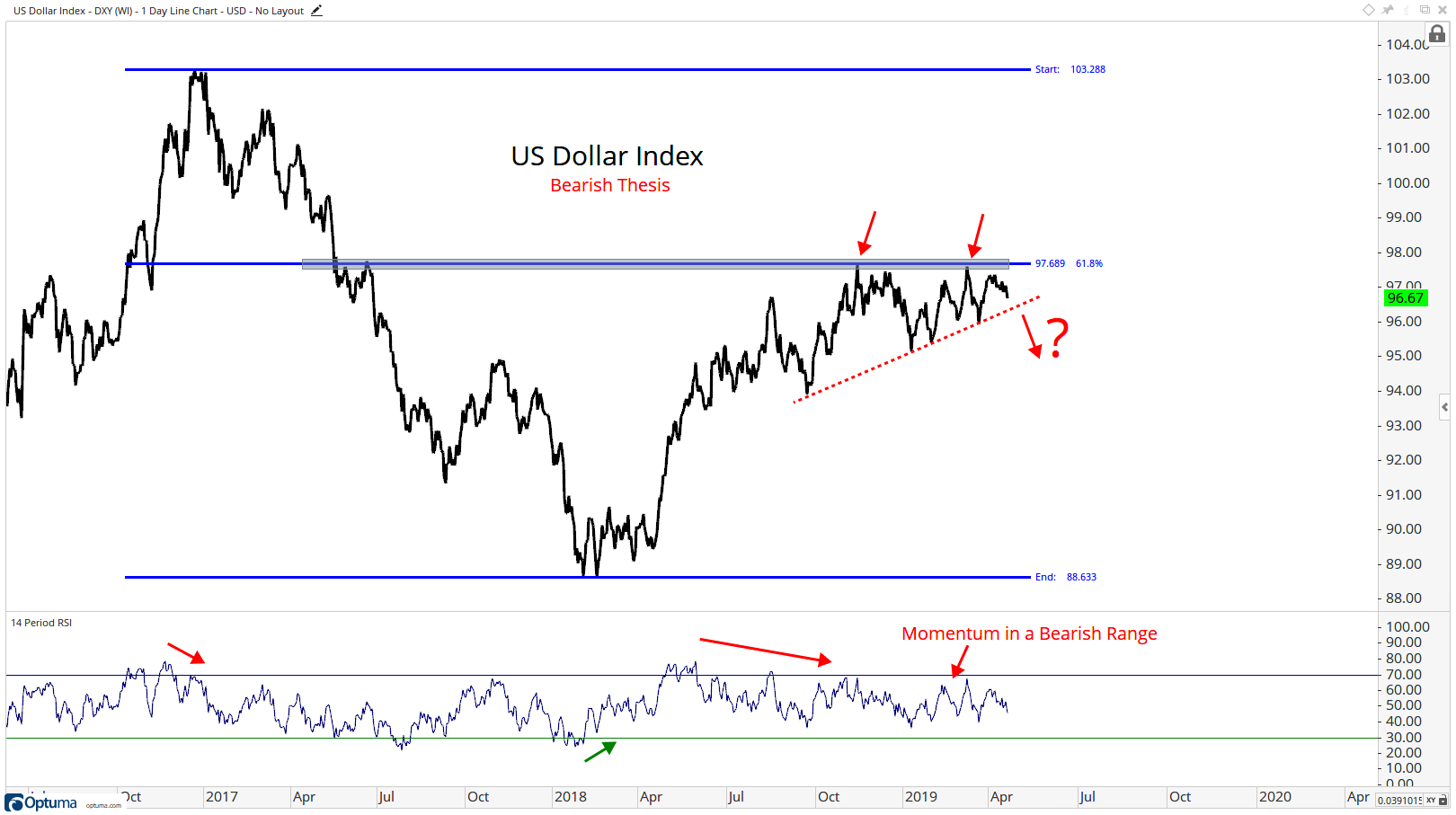 Or is it that the more times a level is tested, the higher the likelihood that it breaks? In this case, Dollar strength would most likely coincide with weaker stocks, particularly emerging markets. 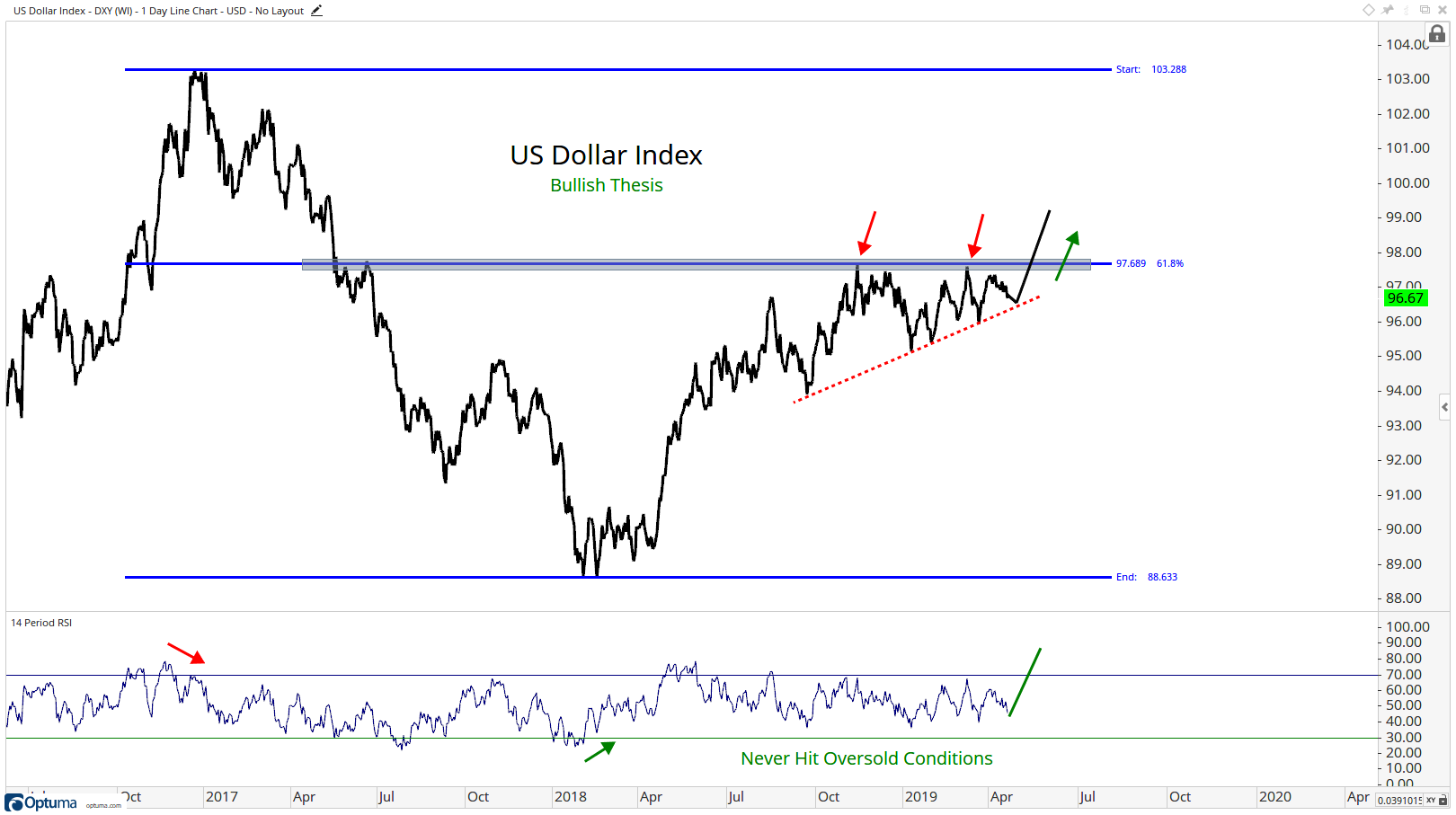 This was a big one coming into the year and I still think it is.

For me, the weight of the evidence continues to point to a weaker Dollar. But I’ll say this, a sideways dollar has helped stocks. So remaining in this range is fine too.

Ultimately, we’re going to see a resolution, whether higher or lower. My bet is higher stock prices and lower US Dollars. But remember, if the Dollar Index is above 98, then that thesis is invalid and we need to adjust accordingly.