There are a couple of underperforming areas that have caught my attention this week. One of them is technology and the other is emerging markets. These two have been serial underperformers for a while now. When the Apple bubble popped in September, its outsized weighting has dragged the tech space down ever since, specifically on a relative basis. Emerging markets peaked on the first day of the year and have been trading lower for 4 months, both on an absolute basis and relative to S&Ps.

The two charts I have today are ratios against the S&P500. The first one is the SPDR Technology Sector ETF ($XLK) vs the S&P500 ETF ($SPY). This ratio has been getting crushed since the September peak in $AAPL, but is just now trying to turn the corner. The spread has finally broken its downtrend line and is now working on making its first higher high: 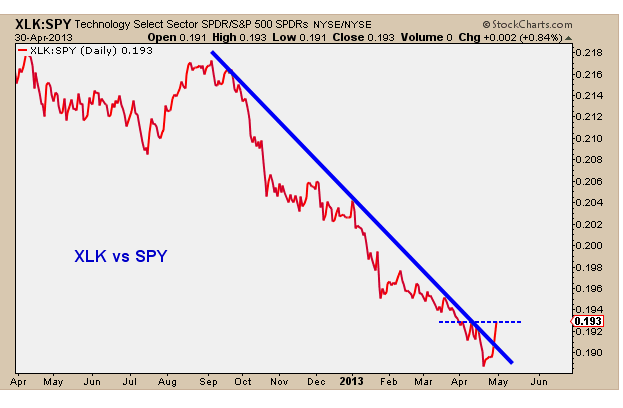 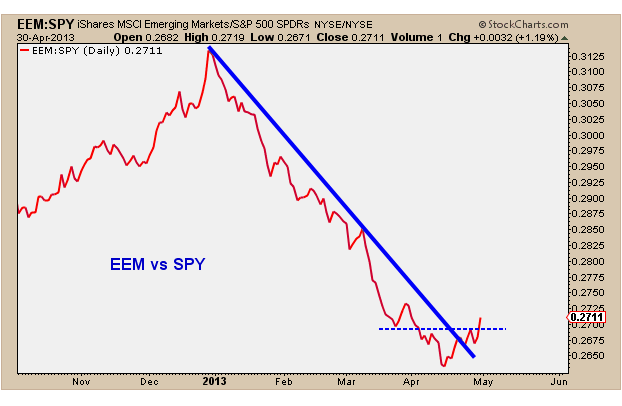 Now, something important to keep in mind is that just because a trendline is broken doesn’t mean that the trend has reversed. Generally we can expect that at least a sideways market should ensue. Whether these two markets actually reverse and begin heading higher is still up in the air. But I think these trendline breaks along with positive momentum divergences are definitely worth noting.

This goes back to whether or not the institutional money is rotating back into the underperforming areas of the market. There are two schools of thought: One of them is that since Defensive areas have led this year, while tech, materials and really anything “global growth” related has underperformed, this is a sign of trouble ahead. But the other view would argue that money can flow back into these underperforming areas, sending major market averages even higher. Two of these areas are Tech and Emerging markets. You can argue that if EM heads higher, materials and industrials should follow as well.

So these are really two key areas that we want to watch here short-term.