Every market environment is different. It’s changing every day. What might give us insight into what’s happening during one period of time in the market doesn’t guarantee that it will help in the future, or ever again for that matter. Back in 2008-2009, correlations spiked all over the world and the US Dollar was moving in the exact opposite direction as the S&P500. Watching the Euro and more specifically the Euro/Yen was a huge advantage back them. I remember it like it was yesterday. But in today’s environment, those negative correlations are no longer valid. It’s a different market environment now. It’s always different.

So while the EUR/JPY and the US Dollar Index were great tells for the direction of US Stocks in 2008, today we’re looking at different indicators. Two that I’m particularly focused on right now are Germany and London. First of all, these are 2 of the most important indexes in the world. Top 3? Top 5? Either way, both of them are on the Mount Rushmore of Stock Market Indexes.

Here is the first chart of the German DAX. As you can see we hit an all-time high in the spring of 2015 just a few weeks before the S&P500 and Dow Jones Industrial Average made their highs. After a 2-year correction, Germany finally broke out in late April this year. The question is simply: Is this the retest of a successful breakout and now we rip to new all-time highs? 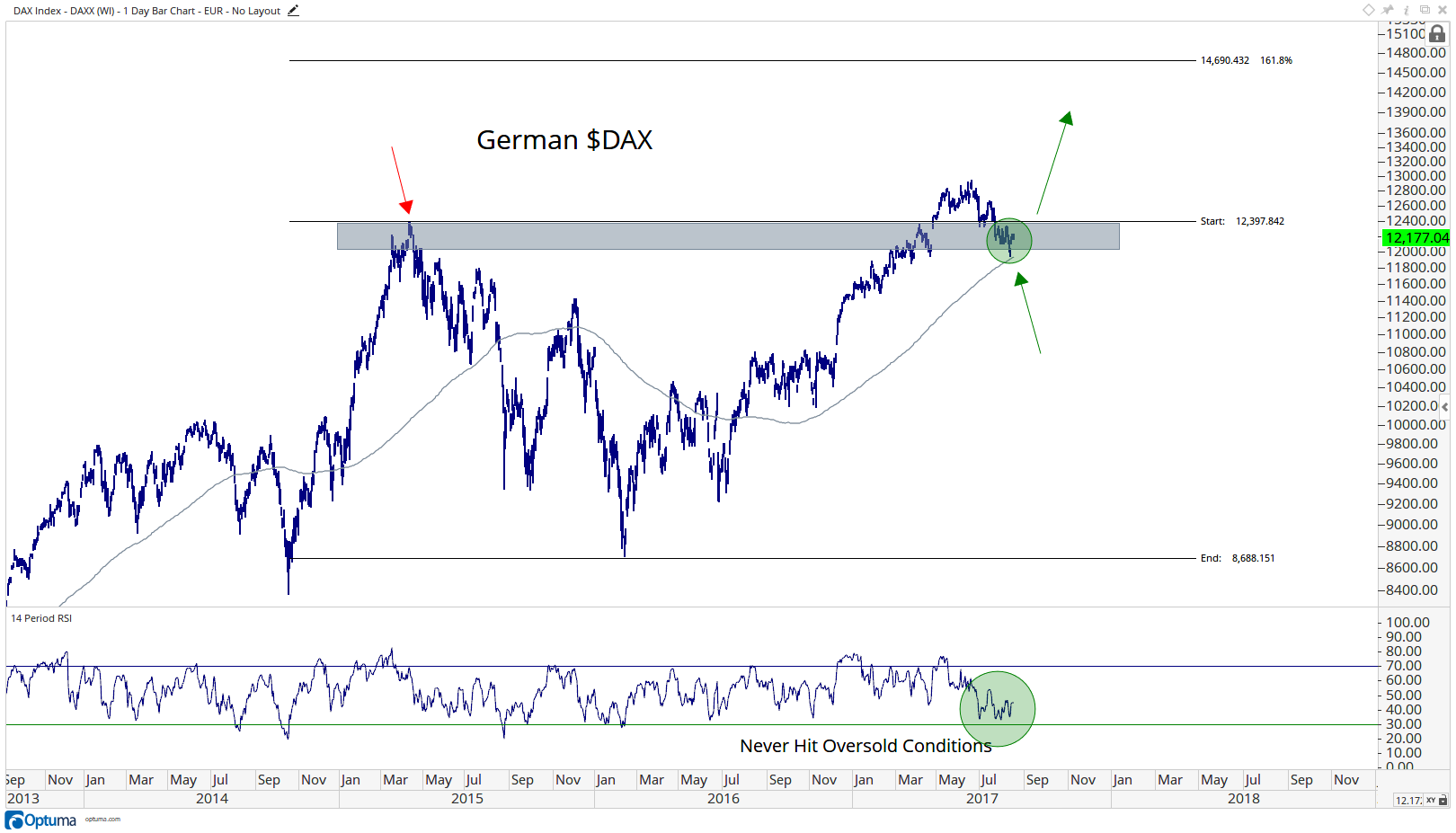 Or this a massive failed breakout and the result here is going to look something like this instead? 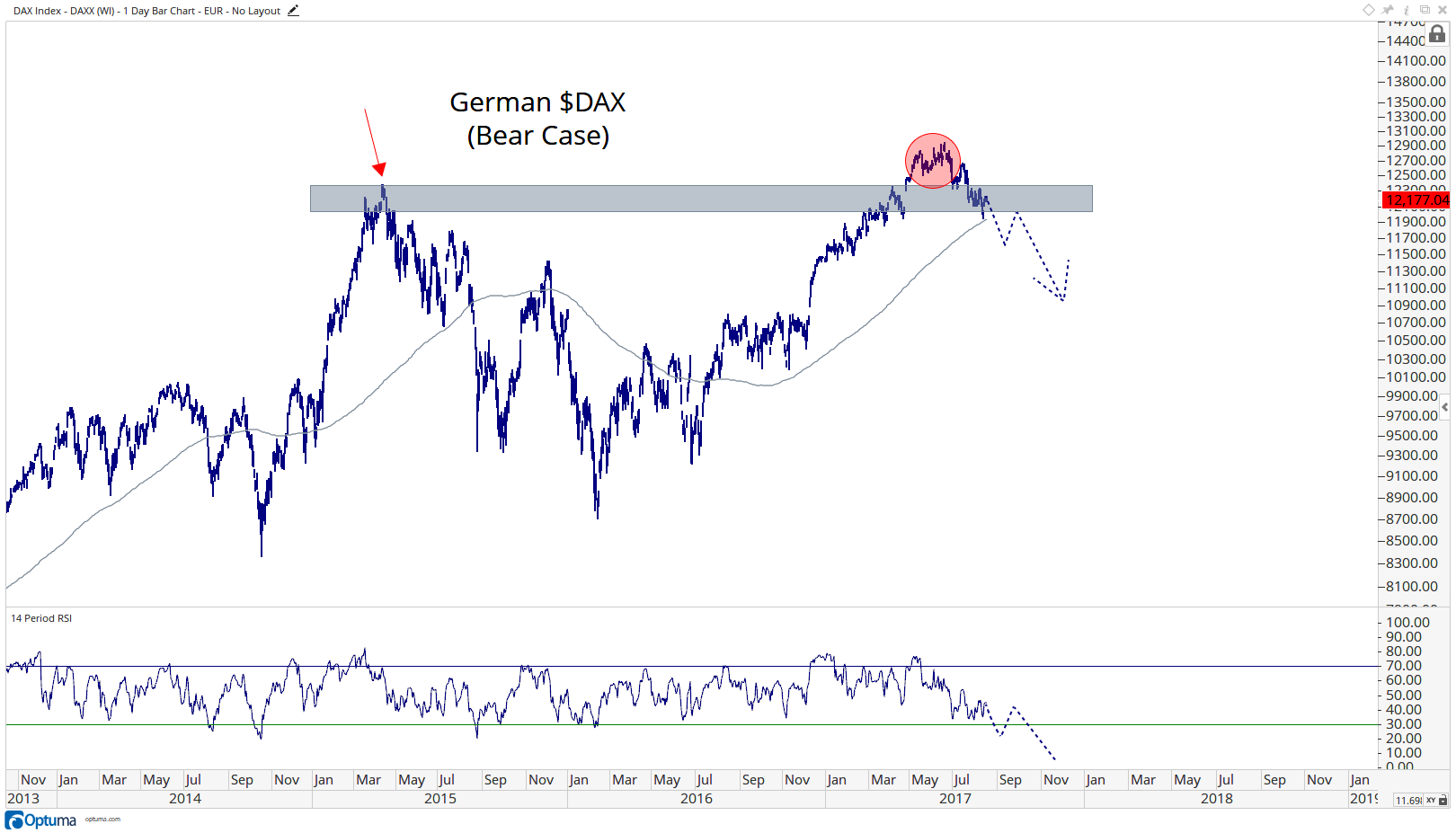 Based on the weight of the evidence, I think the higher probability is the former: a breakout to new all-time highs with the next target up near 14,700. Before I explain why, here is the London FTSE 100, the second of what I consider to be the 2 most important charts in the world right now. You can see that while the S&P500 broke out in 2013 above its former highs in 2000 and 2007, London finally broke out late last year. 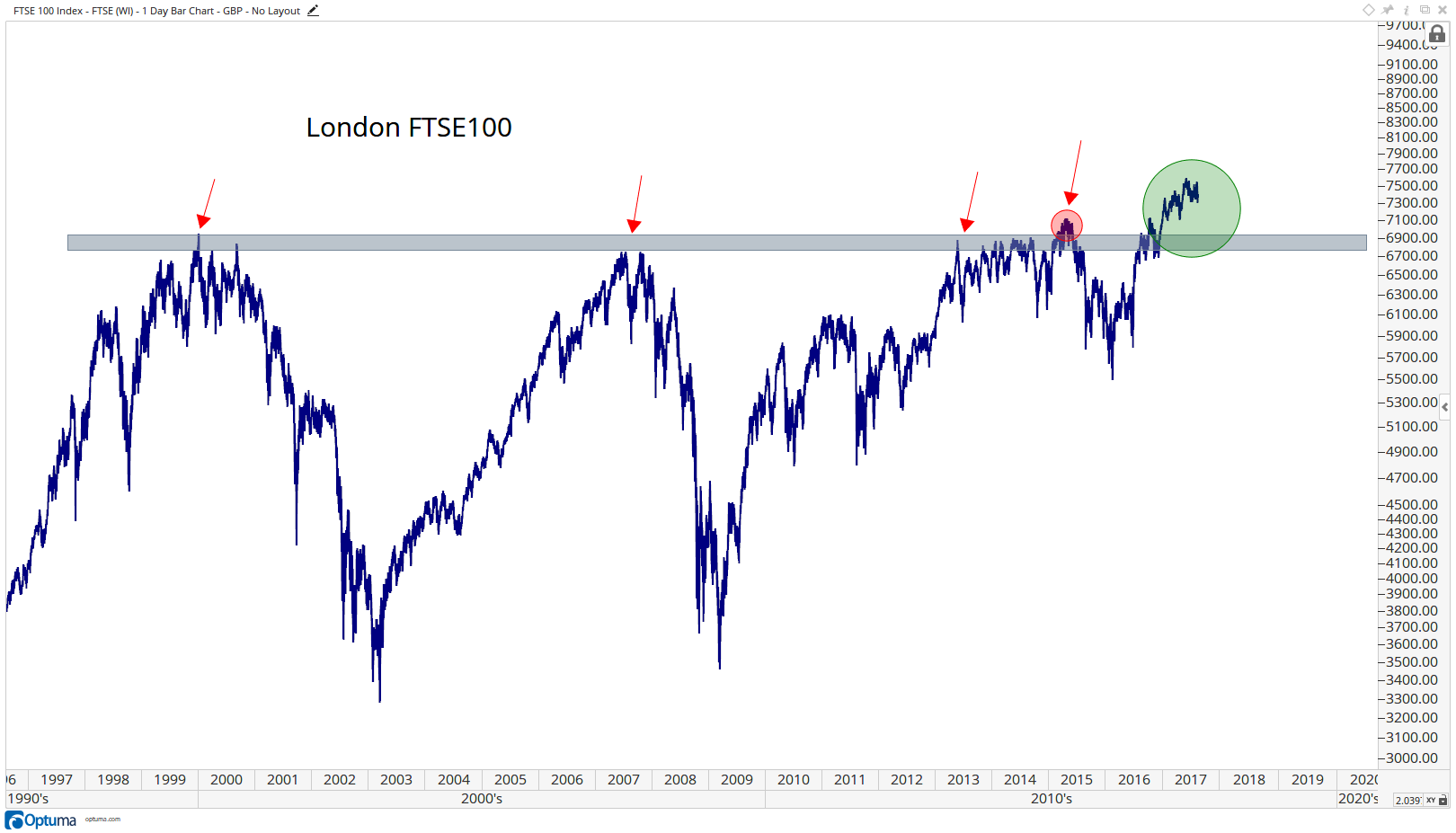 Here is a closer look at the FTSE100. I included these arrows to point at former resistance and support levels. Remember that one turns into the other within ongoing trends. If we are to break out above the upper end of this range, I think we head much higher: up above 8100. When you think about the fact that we are just now coming out of a 20-year base, the upside implications can be historic. “The bigger the base the higher in space”, is how I approach the market: 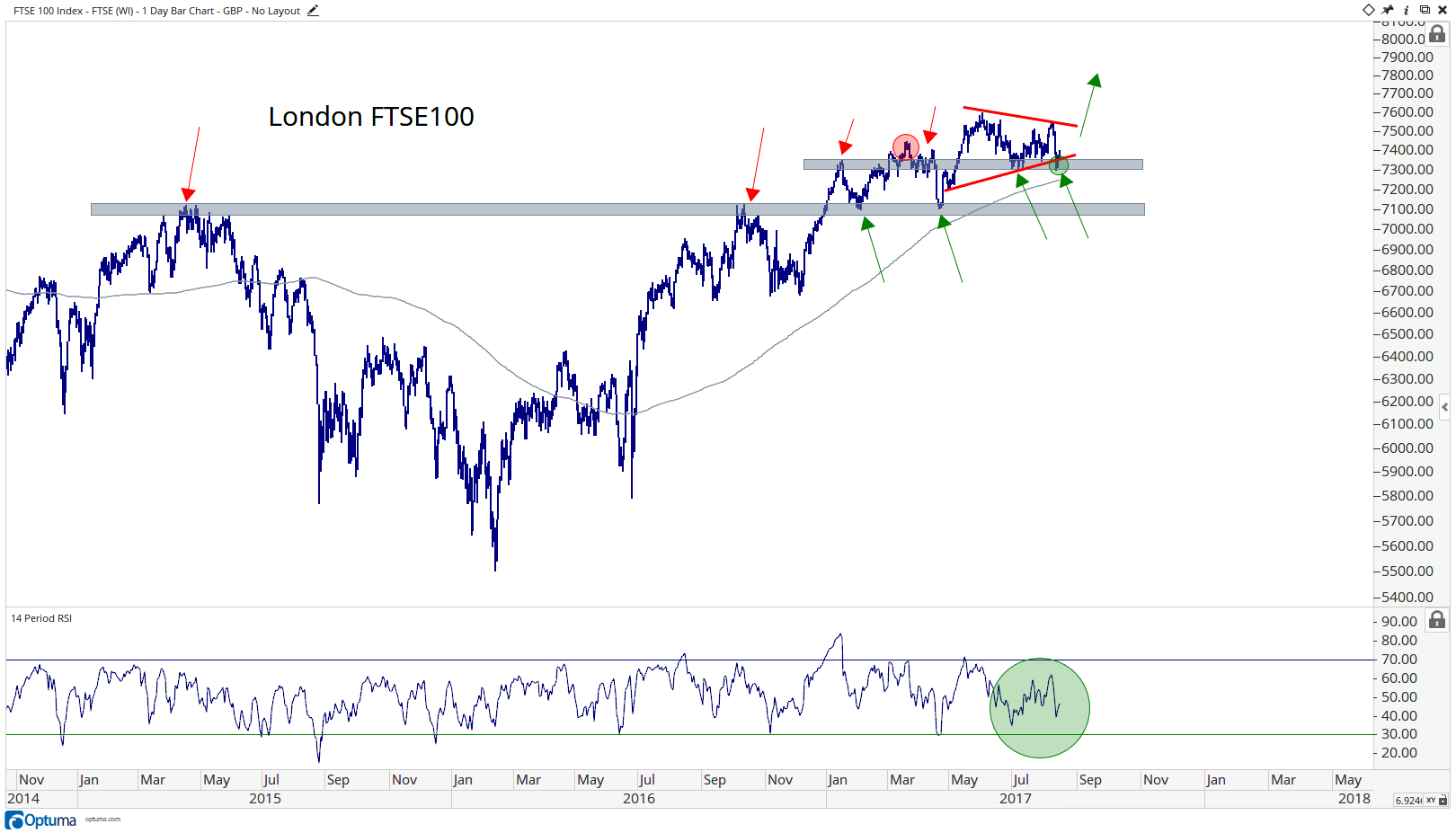 The bear case is simple here. If we resolve this symmetrical triangle looking pattern, which is continuation in nature, to the downside instead of higher, it would cause momentum to get into bearish territory and much lower implications for prices. 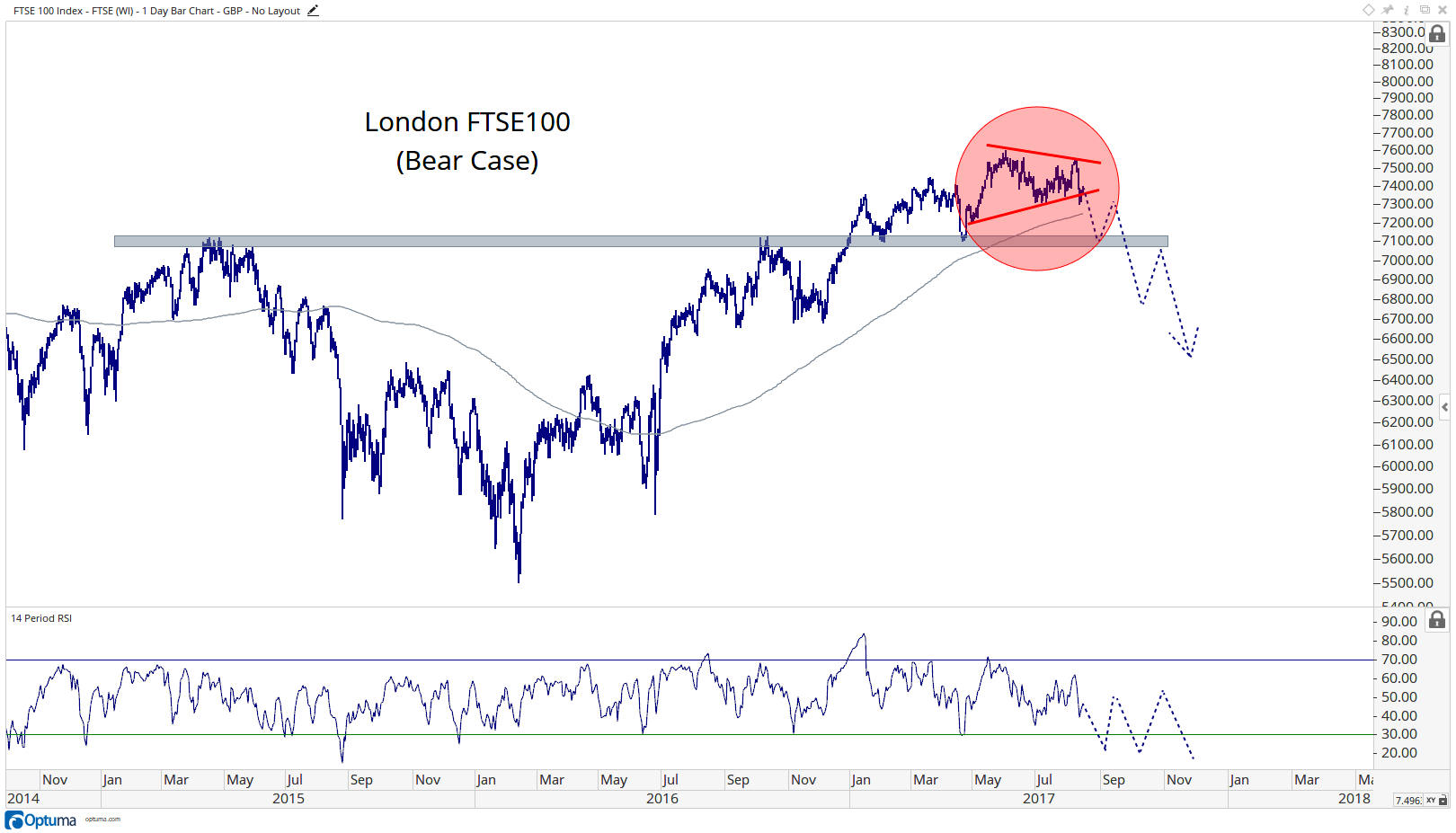 I think this is the lower probability outcome and new all-time highs is most likely here. First of all, markets trend, so there is a much higher likelihood that this uptrend continues than for it to completely reverse. Second of all, there are clues around the world to help us come to a conclusion. By analyzing every index in the world we can actually weigh all of the evidence. Are markets globally breaking out to the upside within uptrends? Or are we seeing indexes break down extending downtrends or initiating new ones?

Without question, stocks are in an uptrend. Consolidations are resolving higher, not lower. This is a bullish market environment all over the world, not just in the U.S. or Germany or UK. Here is the Euro Stoxx 600 which is much more representative of the region and not  just one country’s index. You can see that Europe has been in a correction since May of this year but momentum has remained in a bullish range. This uptrend is still intact and I believe the resolution will be higher. This fits within the thesis laid out above about Germany. 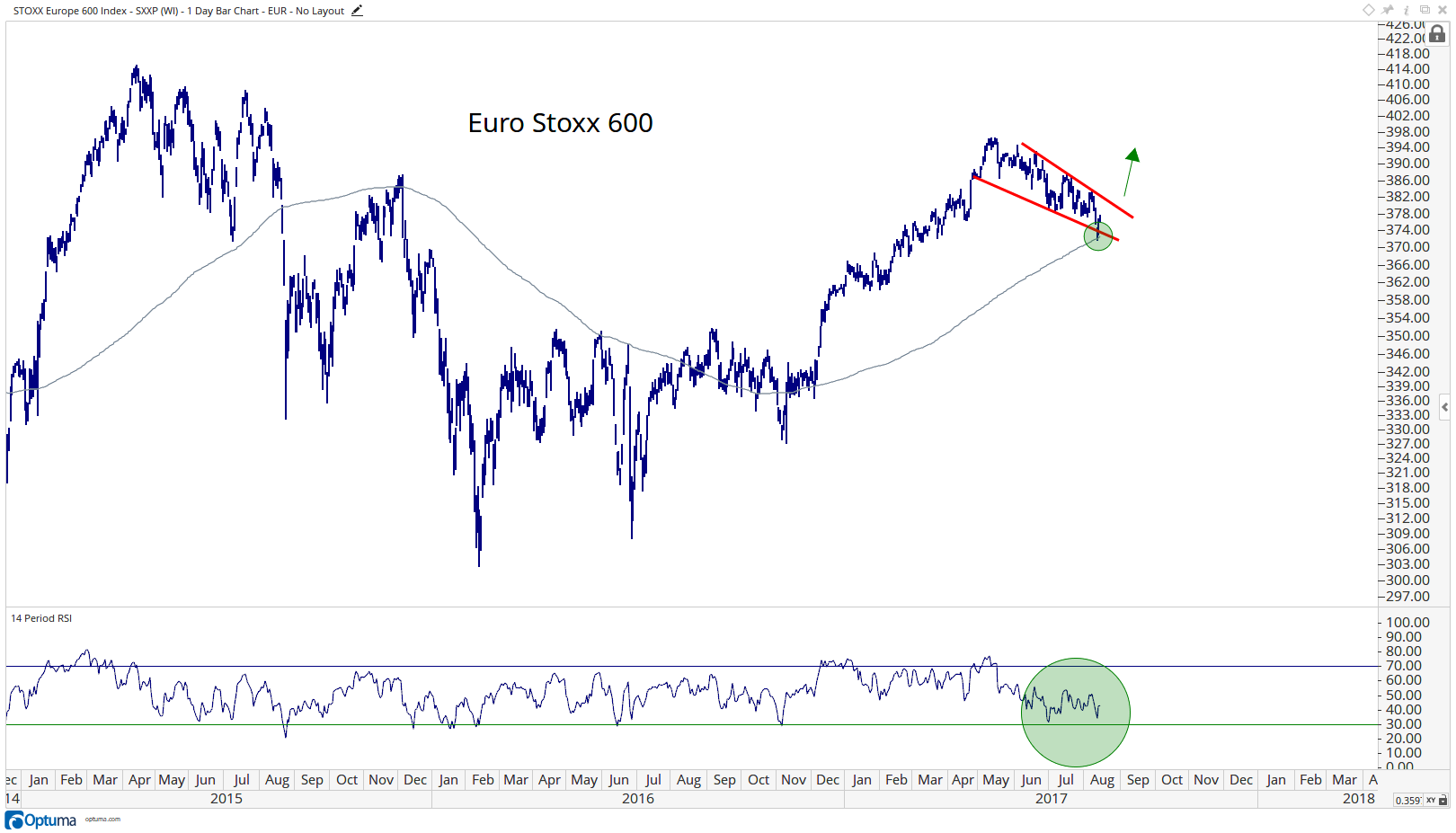 We are seeing strength in the more vulnerable areas within Europe. Look at the momentum in Italy. This is a recipe for an upside resolution here. If they’re buying Italian stocks, I promise you they will be buying Germany and London. And if they’re buying Germany and London taking it to new highs, that’s not coming in an environment where S&Ps or Russell2000 stocks are getting crushed. This will most likely coincide with an overall healthy market environment for both US and foreign stocks 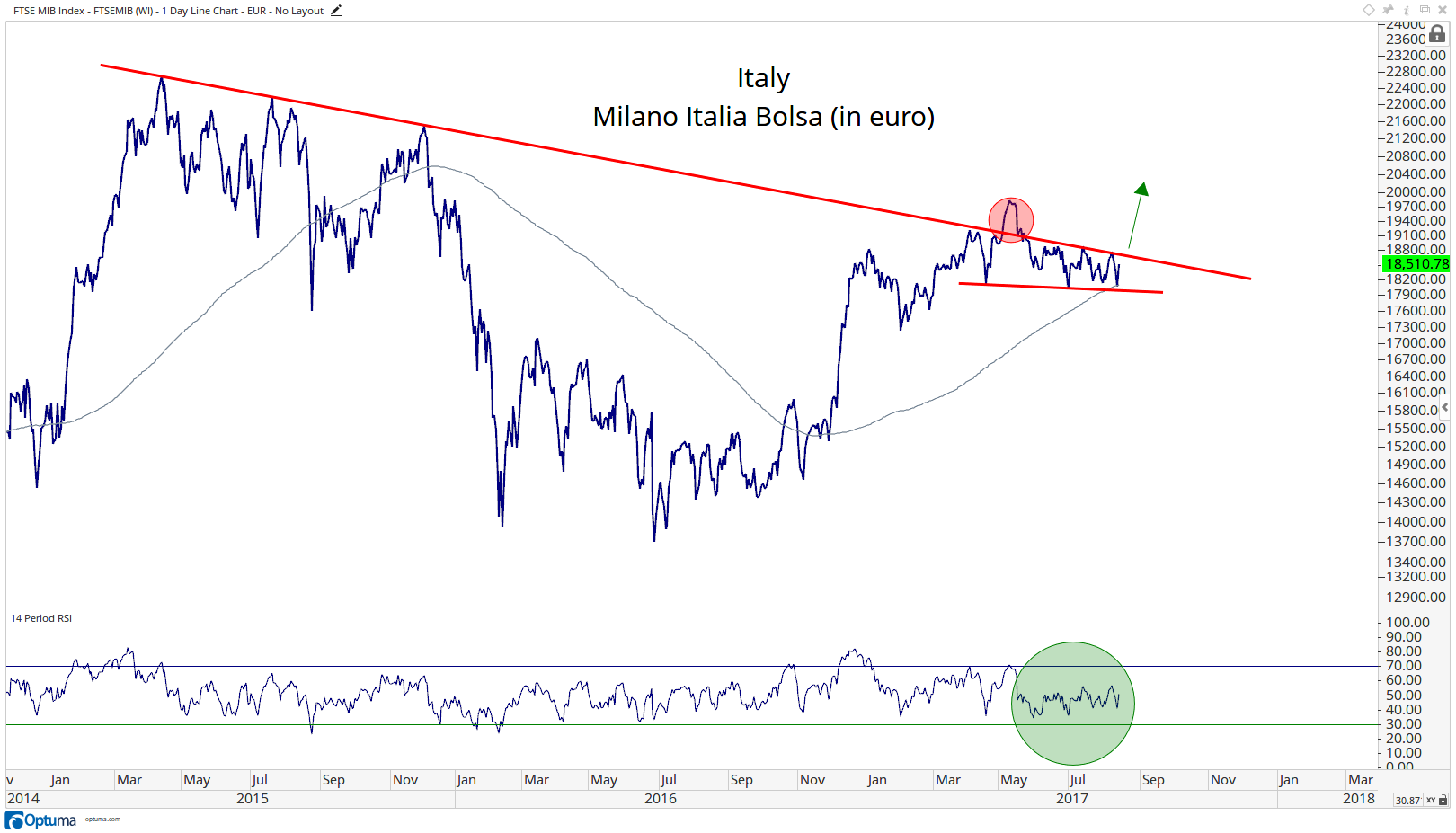 Outside of Europe, look at what’s probably the other chart on the Mount Rushmore of International Stock Markets: Japanese Nikkei. To me this looks like an uptrend: higher highs and higher lows. That resistance throughout the first quarter this year is turning into support and momentum is in a bullish range. I think this support holds and a retest of the 2015 highs is coming. This also fits well within the bullish environment we’re expecting with Germany, UK and US Stocks continuing higher. 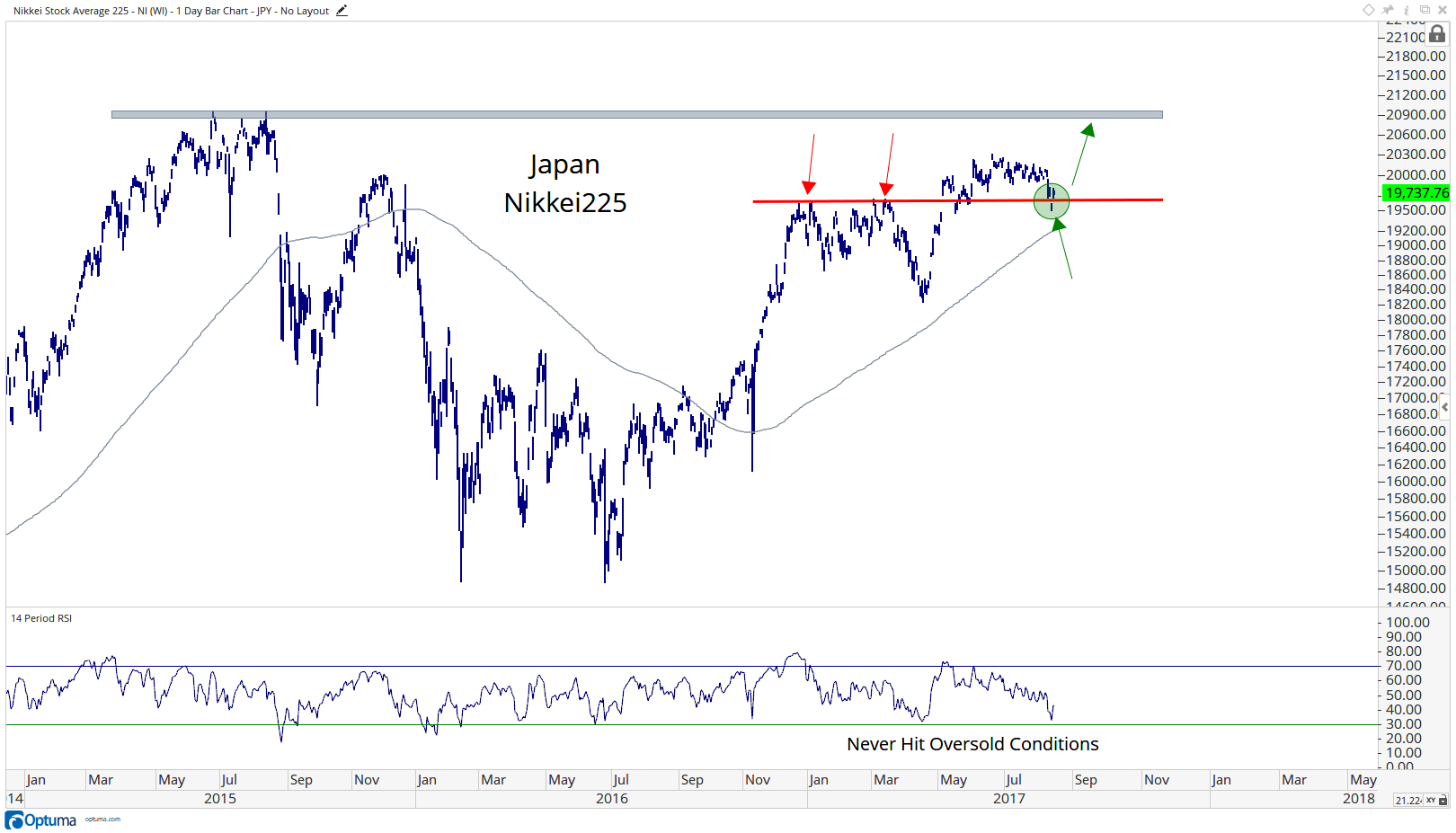 There are a lot more charts that tell a similar bullish story including the $NIFTY50 and $NIFTY500 in India, Australia, Brazil and Mexico. To view all of these charts and the rest of my International Workbook of Charts, I encourage you to start a Risk Free Trial. Here is the entire list of International Indexes I update regularly for subscribers to the platform: