Inflation has been the talk of the town in recent weeks. But, now that the Federal Reserve has finally joined the chorus, the market seems to be headed in a different direction. At least over the near term.

Short rates are holding up just fine, but the longer end of the curve has been under serious pressure.

We’ve been closely monitoring long-duration rates for signs of further weakness. As we write, the 30-year is violating its summer lows, and the 10-year is testing a critical level of interest around 1.40%.

The bulls really need these levels to hold. If they don’t, we’d better get used to the recent volatility–because it’s likely to get worse.

This is a weekly chart of the US 10-year yield: 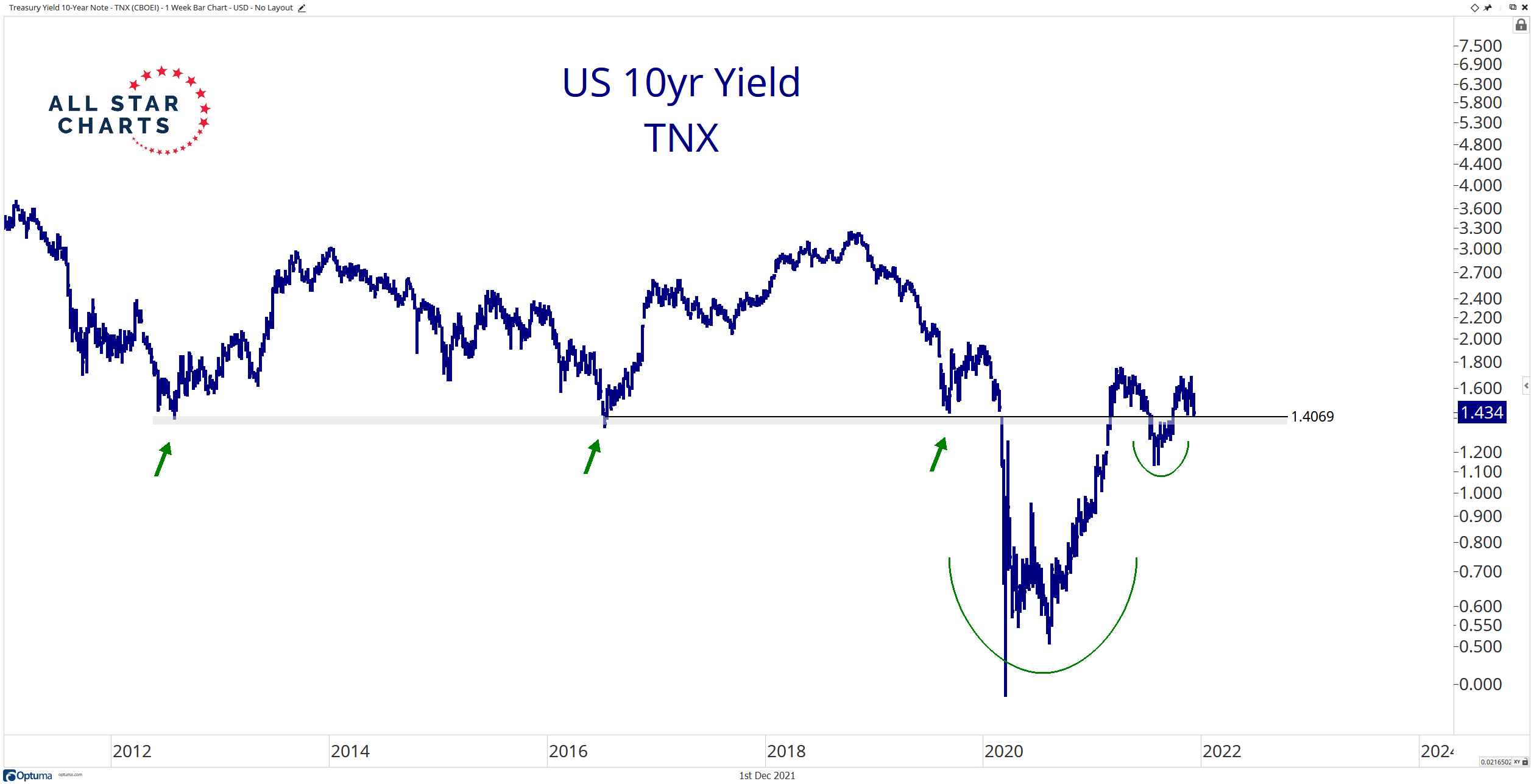 We’ve been focused on the 1.40 level for several years now… and for good reason. Yields bounced at this very same area in 2012, 2016, and 2019. Though there might not be price memory there, investors are keenly aware of the 1.40 level.

The 10-year has been chopping around this crucial zone since June. It tried to make a move higher in September, but it was short-lived. For now, it’s still stuck in its year-to-date range–as is the case for most risk assets.

When the short end of the curve rises and the long end fails to participate, eventually we have to ask the question, “What does this mean for economic growth?”

When the economic outlook is strong, rates tend to be rising across the board. And, more importantly, the Treasury curve is usually steepening, not flattening. A steeper curve simply means that long rates are outpacing short rates.

But, since earlier this year, this has not been the case. The curve is flattening, and spreads are contracting. We’ve really seen this trend accelerate in recent sessions.

The chart below shows the 2s/10s spread overlaid with the 10-year yield. Notice how closely these two charts have tracked each other over the past two years: 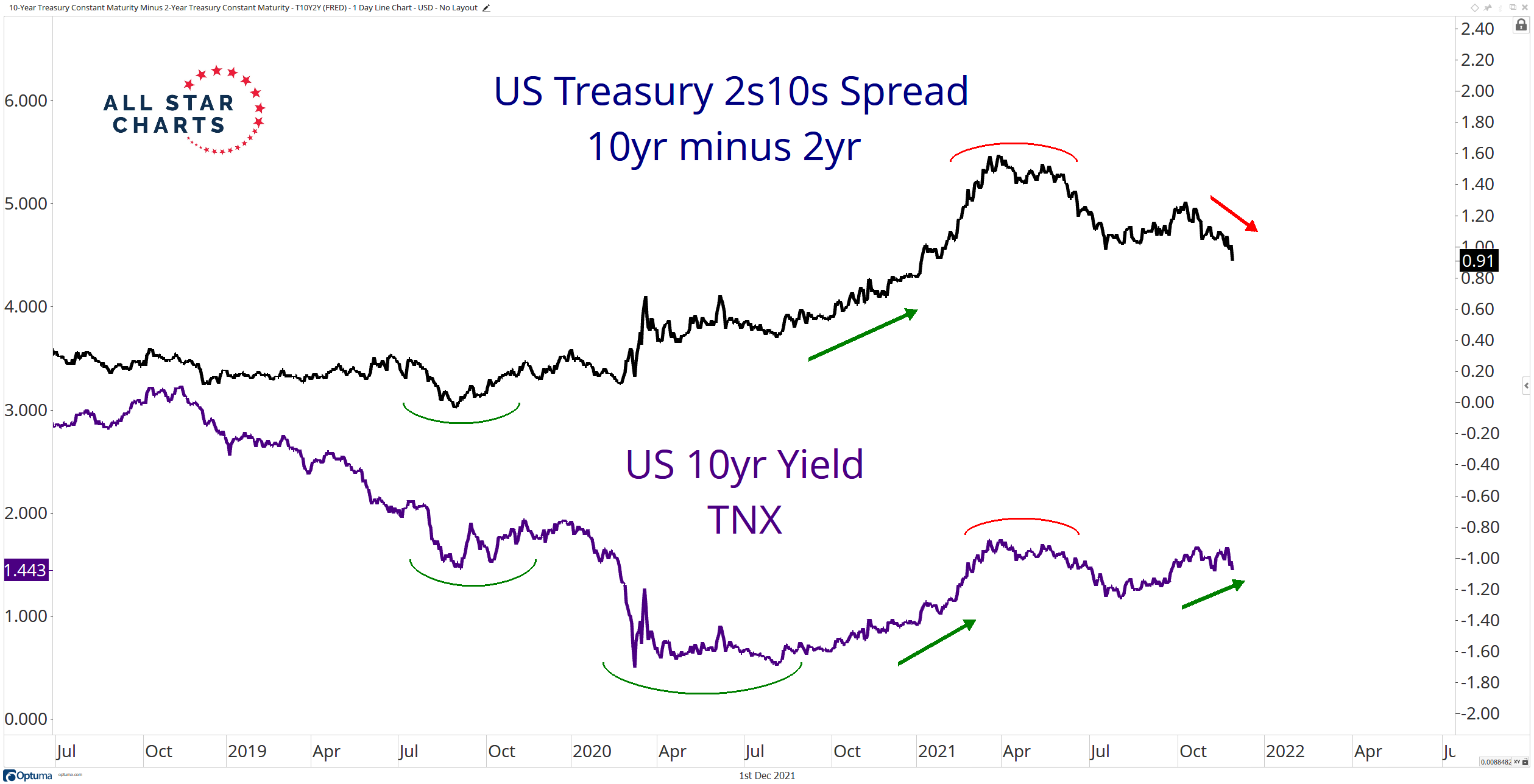 In early October, the 2s/10s made a lower high and started trending lower. At the same time, the 10-year was attempting to reclaim its year-to-date highs but failed to make much progress. The divergence has only gotten worse since, as the spread between the 10-year and the 2-year just plunged to its lowest level since January.

This raises the following question: Will the 10-year yield catch lower and resolve this divergence? If it were to make new lows, like the 2s/10s spread, we’d be looking at about 25 to 30 basis points of downside from here. That’s a big move, and it would have serious implications for risk assets.

In the event the 10-year rolls over, it would put a dent in the reflation and global growth narratives. It would also challenge our current thesis supporting cyclical and value sectors… banks, we’re talking about you. And, of course, it would call into question the the commodity supercycle.

The above are some of the most important charts from a macro perspective right now. Downside resolutions for long-duration rates would be incredibly bearish developments with far-reaching impacts on stocks, commodities, and other assets.

We’ll also be having a very different conversation about the outlook for risk assets. While it hasn’t happened yet, it sure looks like we’re headed in that direction!

Buckle in. We’ll be sure to keep you updated as this critical relationship unfolds.