Maybe this is the top for the S&P500. And maybe the Dolphins win the Super Bowl this year. And Maybe I’ll have steak for dinner on Friday.

The best part about this business is that none of us know what’s going to happen tomorrow. It doesn’t matter what you’ve accomplished until now. We’re all trying to win the same war moving forward. It’s pretty cool when you think about it.

So the question now is (as it seems to always be): Is this the top? I’ve consistently been answering this question with a big fat no since last July and I’ve seen no evidence since then to suggest otherwise. But just like our prior accomplishments mean nothing as far as our mindset goes looking forward, the same can be said about the S&P500 topping out question. We still need an answer. We always will.

Here is the S&P500 on a weekly timeframe going back over a decade. With higher highs in price above an upward sloping 200 week moving average and momentum in a bullish range, there is no question that this is in an uptrend. Thank you JC, master of the obvious. But you would be surprised at how many people fail to identify the direction of the primary trend as step 1. In fact, you’d be amazed at how many people ignore this step completely! 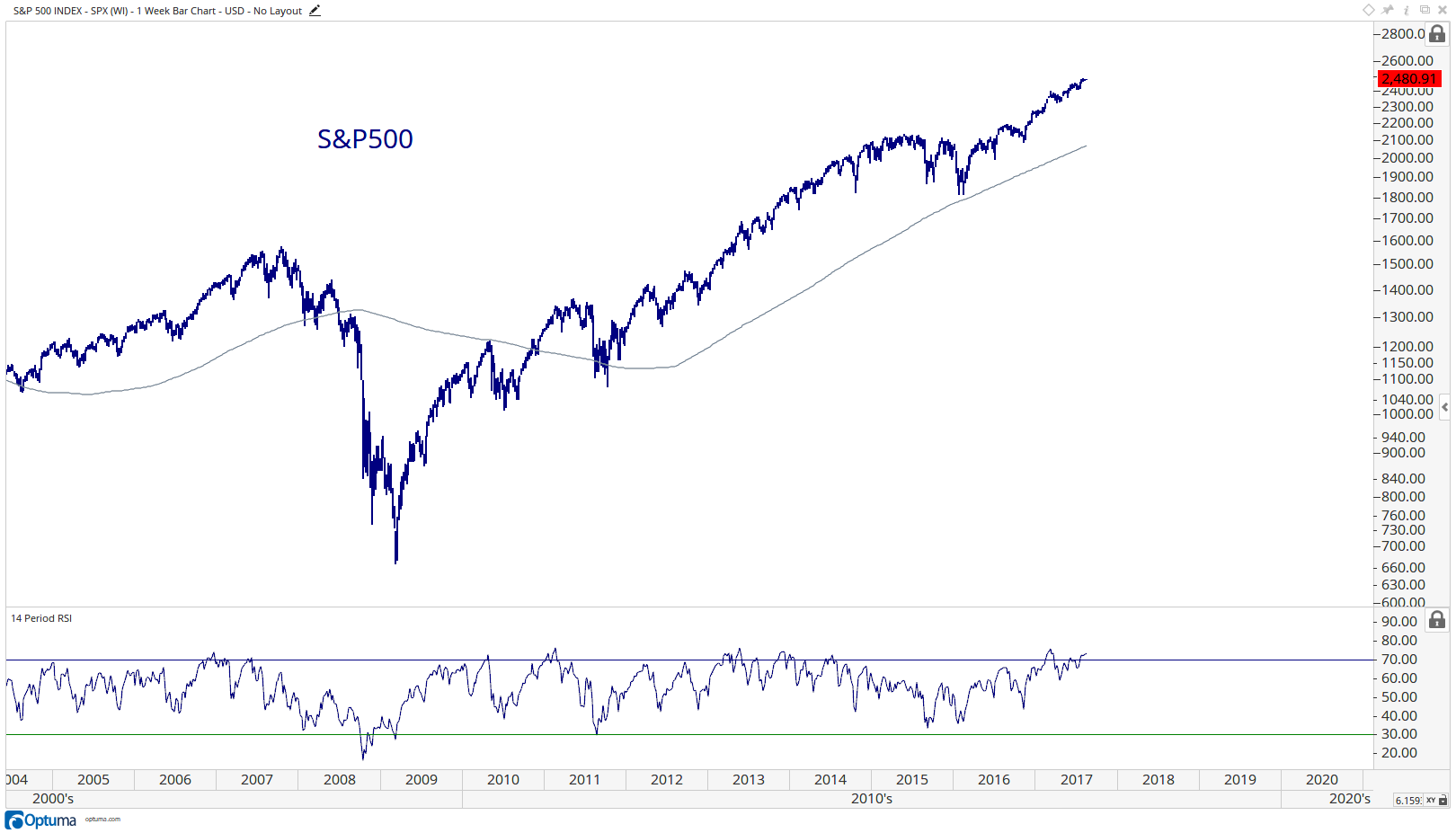 For me to call it quits, it would have to be when targets are achieved. What we’re looking for is the next major extension, just like we did in the Summer of 2015 (See: The S&P500 is weaker than it looks). The 161.8% extension of the 2007-2009 decline was our target. We had to respect that. It wasn’t until last Summer when we exceeded that level and I said, ok we can now move forward. That year and half long consolidation was enough.

Now look at the daily chart with the extension targets. The next logical area of resistance is above 3000. That’s why it’s our target: 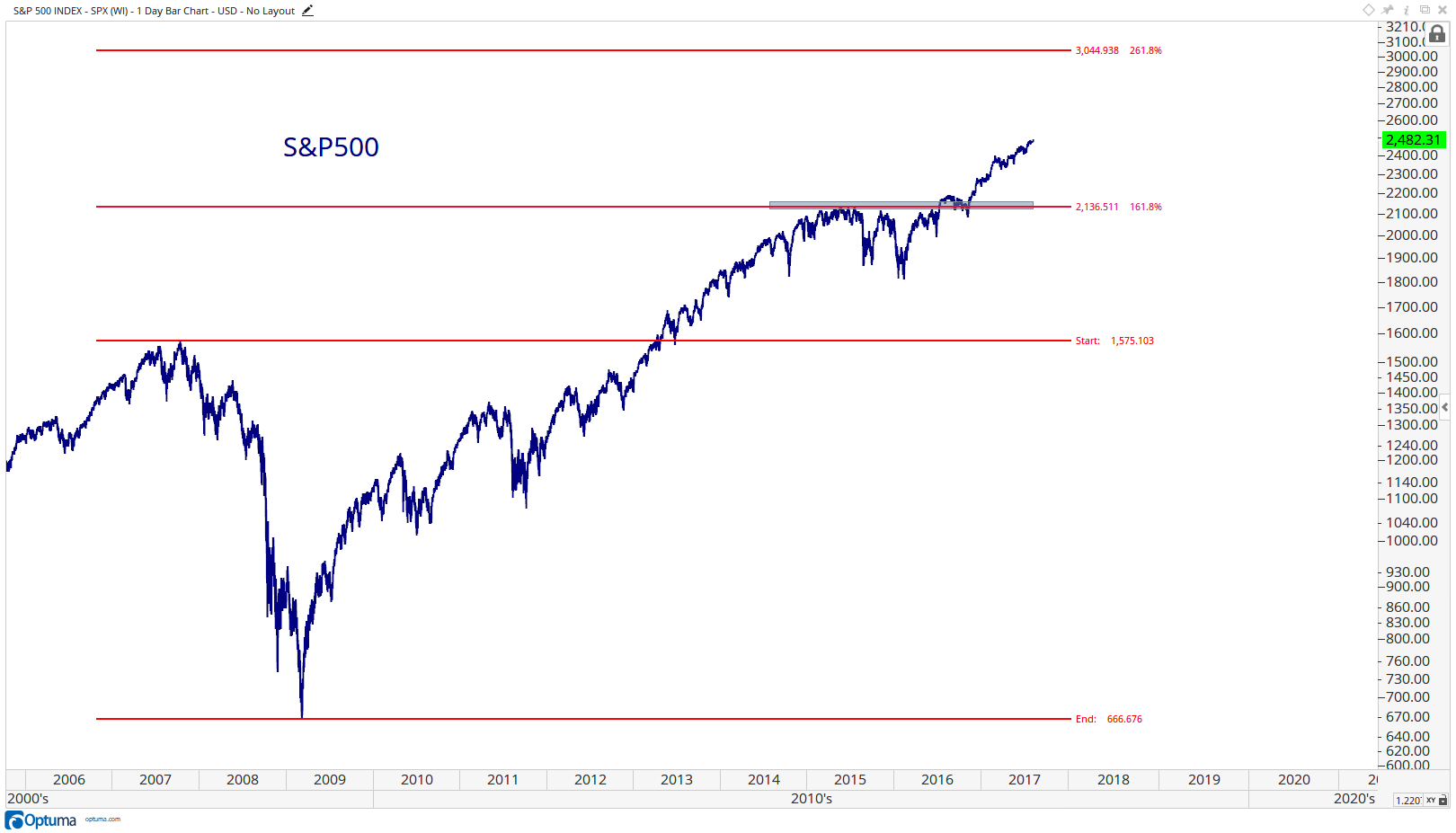 Now, when we break things down shorter-term, I think it’s obvious nothing goes straight up. So when we take the 161.8% extension of the 2015-2016 consolidation, 2340 was our next target. After a brief consolidation near that area, we have moved on. That 2670 area stands out. I still think we need to be buying dips until we get to that area: 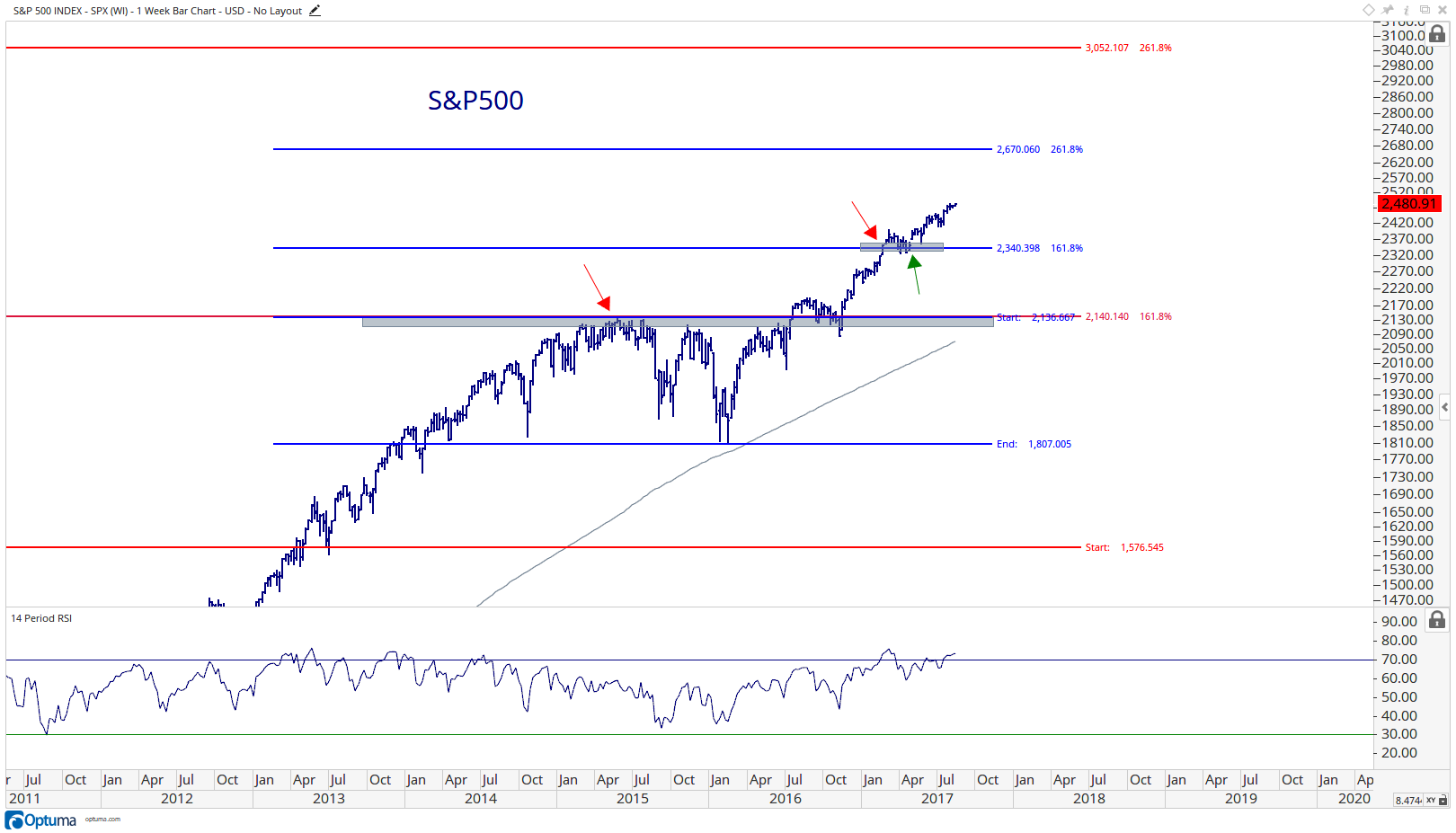 The question we always get is: what we think will happen. The more important question should be: what can happen to change your mind? That’s what I want to know! For me, it’s the late March and early April lows. If those start to break then I would likely tell you that more consolidation is necessary and a cautious stance is best. In the meantime, it’s a market to buy weakness, not sell strength.

Today we are just looking at the S&P500. But there is an entire International top/down approach that I incorporate to come up with a weight-of-evidence conclusion. For today’s discussion, however, I want to just focus S&Ps specifically. It’s important to do that too. You want to keep yourself honest.

Want weekly updates on all of these charts? Not already a Member? Start a 30-day Risk Free trial here!