Monday night we had the privilege to see Tom Fitzpatrick of CitiFX present at the New York City chapter of the Market Technicians Association. We’ve really had some great speakers lately and have a killer line up for the first few months of next year. If you haven’t attended one of these meetings and are in the tri-state area, make sure you keep an eye on the calender for details on future events.

I thought Tom did a great job and was more than willing to stick around for a few minutes afterwards to answer questions and fill in any missing pieces. Here are a few things stood out to me from his presentation:

Fitzpatrick likes US Dollars. He thinks they rally from here in a similar way as the mid-90s and early 80s. In his opinion, the Dollar Index rally is going to come from a combination of $EURUSD weakness down to 1.20 and then parity and continued weakness out of the Japanese Yen. Here is his US Dollar chart where he compares the current price action to prior periods: 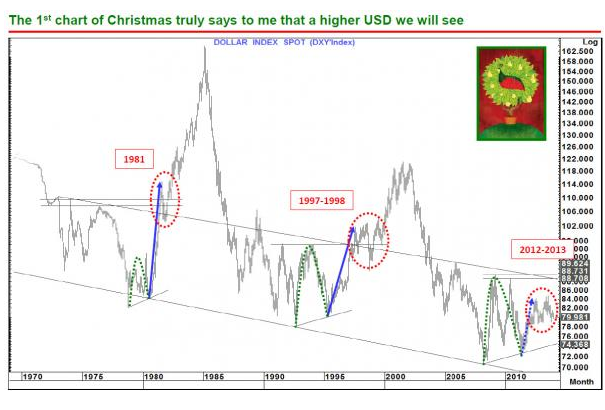 Another interesting chart that he brought up was the correlation between consumer confidence and US Equities. It’s easy to see how Consumer Confidence tends to peak just prior to stocks as seen in 2000, 2007 and just recently this summer. One of the things that worries Fitzpatrick about US Stocks is that with each new cyclical high in the stock market (2000, 2007, 2013), consumer confidence has been putting in lower highs: 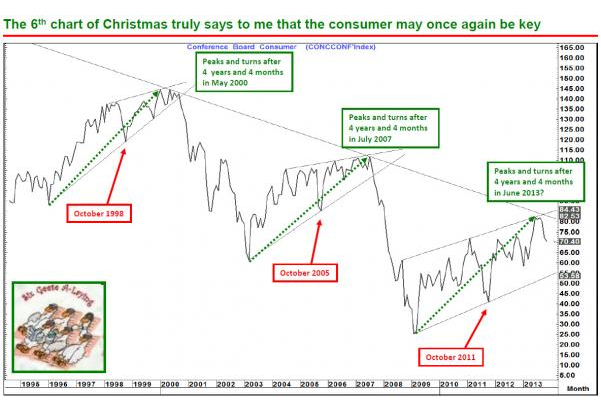 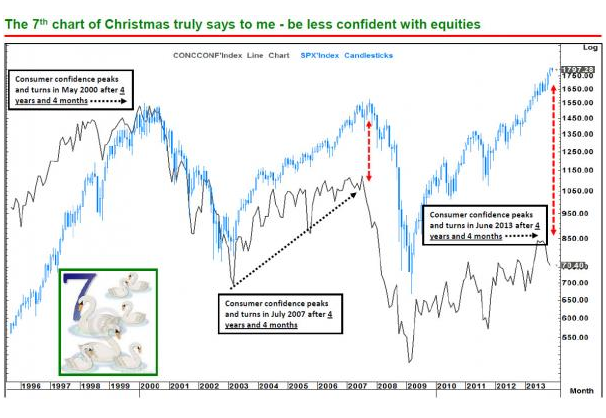 His thoughts on interest rates stood out as well. He pointed to how many double tops are seen in this long-term chart of 30-year yields. He thinks yields pull back which should spark a rally in bonds prices, and if the October lows in rates are taken out, it would confirm a double top that could really send bonds soaring. Although bigger picture, he believes rates go much higher, they show some short-term vulnerability: 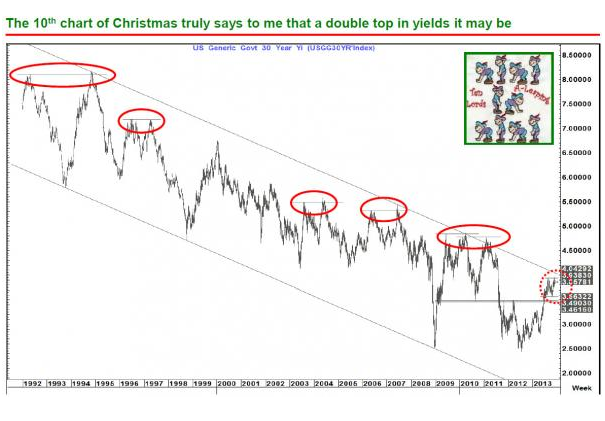 And finally Gold. Fitzpatrick sees the current Gold correction similar to what we saw in the 1970s: half way through the entire rally. His target above $3000/oz remains in place but should take several years to get there. He also points out that renewed strength in gold prices should coincide with weakness in US Stocks, again similar to the action in the 1970s. When asked about Silver, he reiterated that Silver should act as a more leveraged play on gold, in both directions. 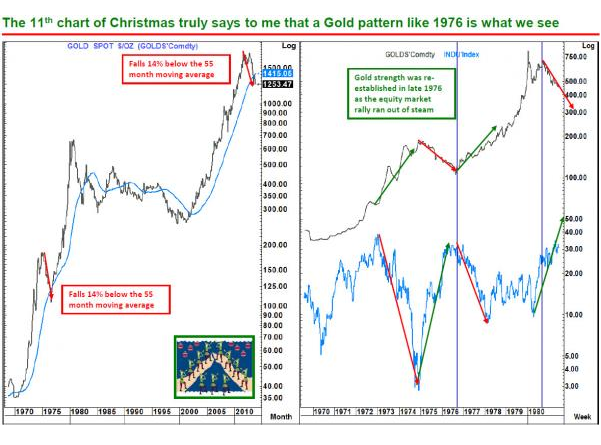 I asked him if he could see a situation where US and European stocks correct while the Nikkei in Japan continues to rally. He said he could absolutely see that and pointed to the years of US and European stock market rallies without Japanese participation. I thought that was interesting. The chart he currently has the most conviction on is the US Dollar. Of all of his “12 Charts of Christmas”, this is the one he feels most confidence about.

Great presentation across the board. Very well done.