With Natural Gas futures up roughly 48% since the December lows, the urge to call a bottom in this asset class is quite strong. However, history tells us that the most vicious rallies occur during bear markets, which may suggest that current levels offer a decent risk/reward on the short side.

Before taking a look at price, it’s important to be aware of current sentiment and seasonality data within its proper historical context. In terms of sentiment, the recent rally has allowed a number of things to occur.

In addition to that, seasonality data from the past thirty years suggests that Natural Gas tends to struggle in the early months of the year, with average returns of -5.7% and -0.2% in January and February, respectively.

There was no doubt that sentiment was stretched to extreme levels late last year, but the recent rally allowed sentiment and momentum to come back toward more neutral territory; possibly setting up for another leg lower.

In terms of price, structurally Natural Gas remains in a downtrend. After a failed breakdown below the 2012 lows sparked a vicious rally December into January, prices are back at overhead supply and potentially putting in a failed breakout above the downtrend line from the late 2014 highs. Momentum did not put in a bullish divergence at the recent lows and remains in a bearish range. 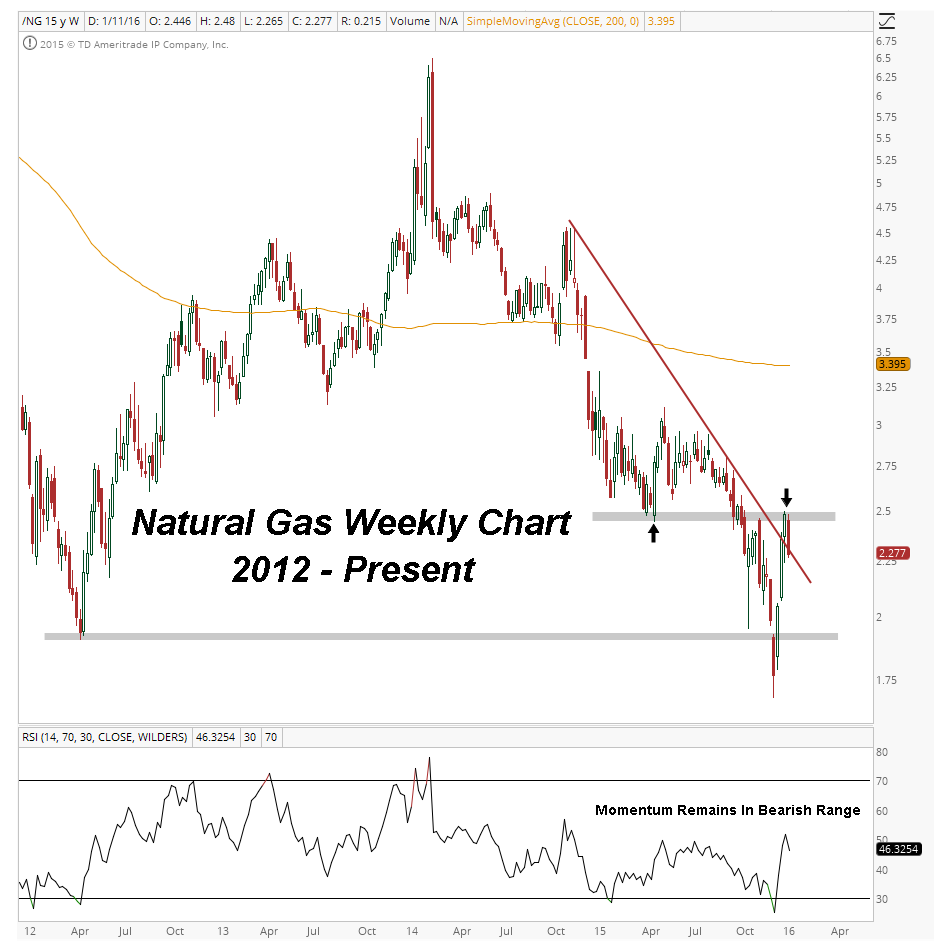 On the daily contract-adjusted chart, prices recently put in a failed breakout above the prior support from the October lows, which corresponded with the 38.2% retracement of the May-December rally. This rally has allowed momentum reset from its deeply oversold conditions, but the fact that it failed to hit overbought conditions on this 48% rally confirms that it remains in a bearish range. Although the 200 day remains downward sloping, prices are still quite extended from it, therefore it was important to wait for a setup where the risk is well defined on the short-side before attempting to fade this rally. As I’ll explain in the conclusion of this post, I think this opportunity has finally presented itself. 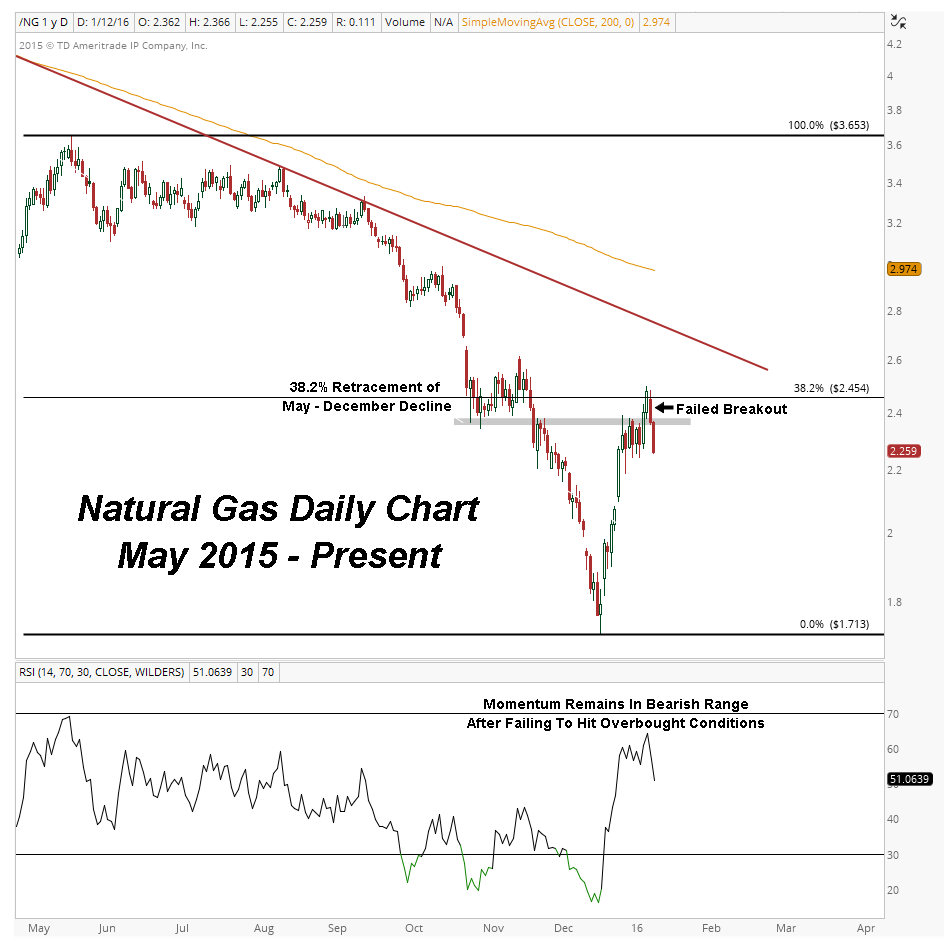 The hourly chart provides a closer look at the failed breakout that occurred above 2.38 and reaffirms how important that level has been both recently, and in the past. In addition to the failed breakout, the 200 hour simple moving average is now beginning to roll over, which should provide a tailwind for lower prices going forward. Momentum recently hit oversold conditions as well, putting it back into a bearish range for the time being. As a result of prices getting slightly oversold here in the extremely short-term, they should find some support in the 2.25 area, but the weight of evidence suggests that fading strength toward broken support at 2.38 should provide a nice entry on the short side. 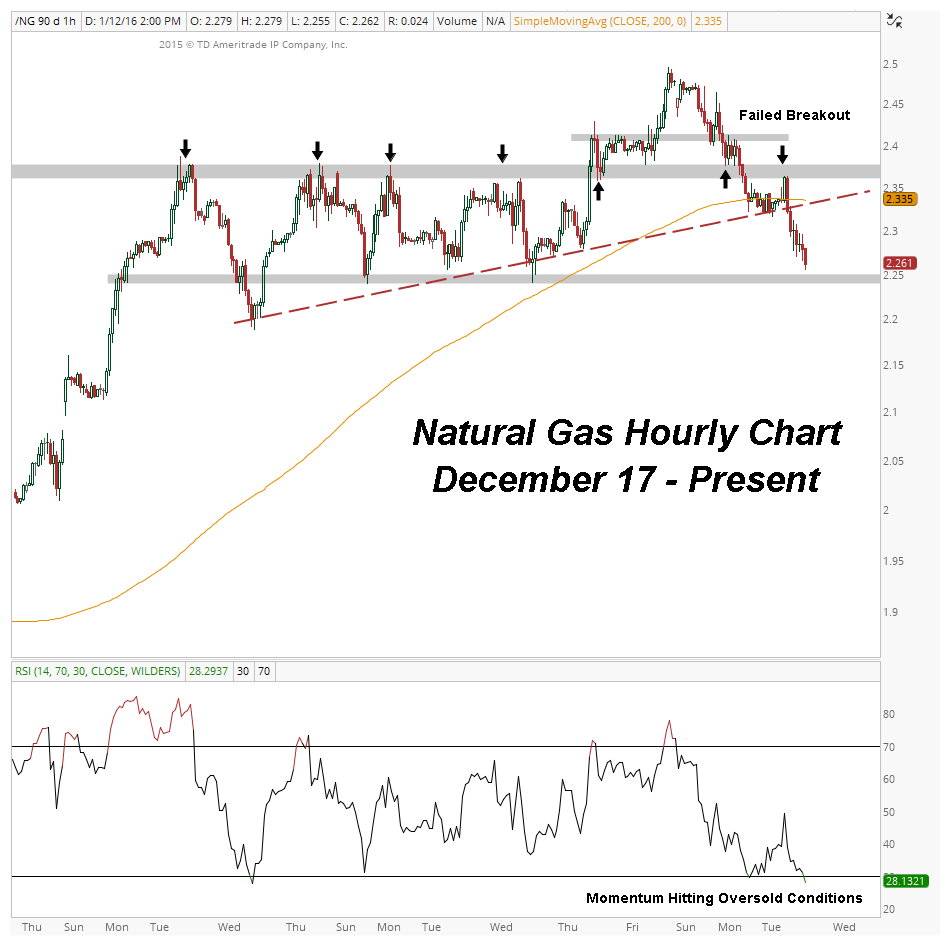 The Bottom Line: In bear markets vicious rallies often allow for conditions to reset and the next leg lower to begin. After a nearly 50% rally off last month’s lows in Natural Gas, I think this market is ready for its next leg lower. As I outlined above, sentiment and momentum have come off extreme levels back into neutral territory, and seasonality suggests that January and February tend to deliver lackluster returns for this market. Within that context, the recent failed breakout has offered a level to trade against where the risk is well defined and the risk/reward is elevated.

With that being said, I’m not looking to short this market at current levels. Instead I’ll be observing this development, and if these conditions persist, will look to sell into strength against 2.38 so that my risk/reward is improved and that my risk remains well defined. Overall, I don’t see any reason why prices won’t retest the 2012 lows, and potentially last years lows, if these conditions persist.

Lastly, I should point out that the Natural Gas / Oil ratio is hitting 6 year highs today, suggesting that on a relative basis Natural Gas still remains preferred to Crude Oil, but I think the weight of evidence suggests that Natural Gas may be due for further downside on an absolute basis.

JC here – How awesome is it that Tom Bruni is sharing his ideas with all of us? I agree with everything he has to say here. Although I’ve been very clear that I wanted to own NG above 1.90 and sell towards 2.55, my upside objective has not been met. Nevertheless, the lack of bullish momentum divergence at the December lows fits well Bruni’s thesis here. I personally would approach this from a more neutral perspective and focus more on the Crude Oil to Natural Gas ratio that he mentions towards the end.