From late January until today, there have been tactical breakouts in currencies of countries with significant commodity exposure relative to the US Dollar. This has provided a tailwind to a number of emerging market equities that have subsequently followed through to the upside. Many of these equity markets are concentrated in Latin America, but areas like South Africa, Africa, Australia, and Turkey have benefited as well.

Whether or not these tactical moves will continue and develop into long-term trends is entirely unknown, but the risk/reward in the US Dollar/Brazilian Real looks particularly skewed in favor of the bears here.

Structurally prices have been in an uptrend since putting in a failed breakdown below the 2008 lows in 2011. Prices really accelerated higher after breaking out of their multi-year base above 2.50 in 2014. Late last year prices broke out to new all-time highs, but quickly reversed to confirm a failed breakout and bearish momentum divergence by closing below the prior highs near 3.7 and the uptrend line from the 2014 lows. 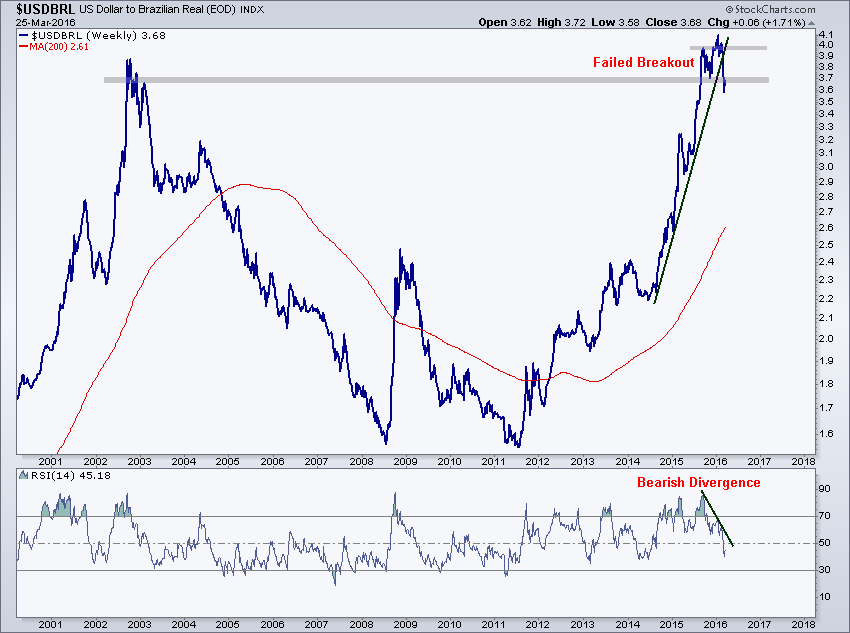 As long as we’re below this uptrend line, and more specifically prior support and resistance at 3.7, the weight of evidence suggests approaching this market from the short side. Given the steep trend higher over the last few years, there seems to be very few potential support levels below. Some potential downside targets are prior areas of support and resistance near 2.97, 2.85, and ultimately the start of the structural breakout near 2.40.

The daily chart provides a more tactical view of the recent breakdown in the USD/BRL pair. Prices made new year-to-date highs at the end of January, but momentum put in a bearish divergence which prices subsequently confirmed by breaking below both its accelerated and long-term uptrend lines. 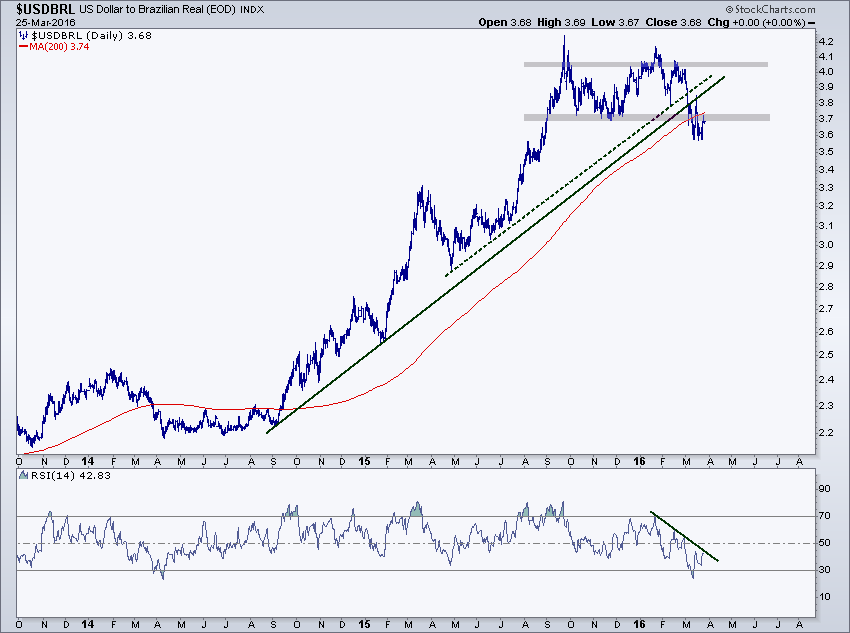 Tactically, as long as prices remain below broken support at 3.70, the weight of evidence suggests approaching this market from the short side. My only concern tactically is that the 200 day moving average is upward sloping, which suggests that there won’t be any sort of precipitous decline until that moving average begins to roll over. Some potential support levels to watch should this market begin to roll over are those at 3.30 and 2.90.

It’s also worth noting that this currency pair topped on January 20th, while the ETF of Brazilian stocks (EWZ) bottomed on that exact day. The correlation is decisively negative here, so the implication is that if this pair continues lower and the Brazilian Real does continue to strengthen, it should provide a nice tailwind for equities in Brazil. This type of relationship exists in many of the other currency pairs and equity markets discussed earlier in the post as well.

The Bottom Line: Whether you trade currencies or not, the developments in the Brazilian Real and other emerging market currencies should not be ignored due to their implications for the equity markets in their respective countries. In terms of the USD/BRL pair, the risk is very well-defined and the potential reward is skewed in favor of the bears here. Due to the strong negative correlation, our bearish view on this currency pair means that our bias toward Brazilian equities is to the upside.

Structurally we want only want to be short this market below the highs set in the early 2000s outlined in gray around 3.70. If we reclaim that level, it’s appropriate to take a more neutral stance until it either breaks down again or gets back above its broken uptrend line.

Tactically we can remain short as long as we’re below that same 3.70 level, but I’d suggest waiting for the 200 day moving average to begin downward sloping before getting aggressive on the short side.

JC Here – Bruni is exactly right. I like how he pointed out that this cross peaked on January 20th, which was the day the stock market bottomed, both domestically and globally. Allstarcharts Members know how important this date was. It was the day most global indexes bottomed and also the day that the list of NYSE new 52-week lows peaked. It should not be surprising that Brazilian Real also bottomed on that day (USD/BRL peaked). Again, whether you trade currencies or not doesn’t matter as much here. It is the information that this is providing that can also add a ton of value. I’d argue that as long as USD/BRL remains below this broken uptrend line from 2014, Brazil and other emerging markets will do well and continue to outperform the U.S. and other developed markets, as they have since January 20th. This is an important one to keep an eye on.

Members of Allstarcharts will be updated on the development of this chart as well as Brazilian and other Latin America stocks and indexes. This has been a big (and very profitable) theme for Allstarcharts members for over 2 months now. Register Here to Start Your 30-Day Risk-Free Trial