One of the most fascinating markets of 2013 has been in Japanese stocks. There’s no doubt about it. Late last year we saw the potential for a pretty decent sized move in the Nikkei 225, but it obnoxiously exceeded all of our expectations. What we thought could be a 10-15% upside move last November turned out to be more like an 80% move over the next 6 months. What a monster that became.

The momentum chasers ripped this thing up above 16000 before the destruction eventually began. We saw a volatile 20% correction in just two short weeks – but that’s what happens after a big move like this. I would argue that the sell-off was both normal and well-deserved. During that correction in Japanese stocks, the Yen saw a monster rally. The negative correlation between Japanese Stocks and their currency has been off the charts over the last year. Apparently the central bank over there is like our Fed on steroids. But that’s not my expertise and I’ll leave that alone for now. Either way, the numbers don’t lie – the negative correlation between the two is nothing to ignore.

So here’s what’s happened since the monster rally and ensuing 20% correction: a whole lot of nothing. Less than nothing. Both the Nikkei 225 and the USD/JPY cross have been consolidating for over six months in a symmetrical triangle with well-defined converging trendlines. Here is what they look like (not a coincidence they’re mirror images): 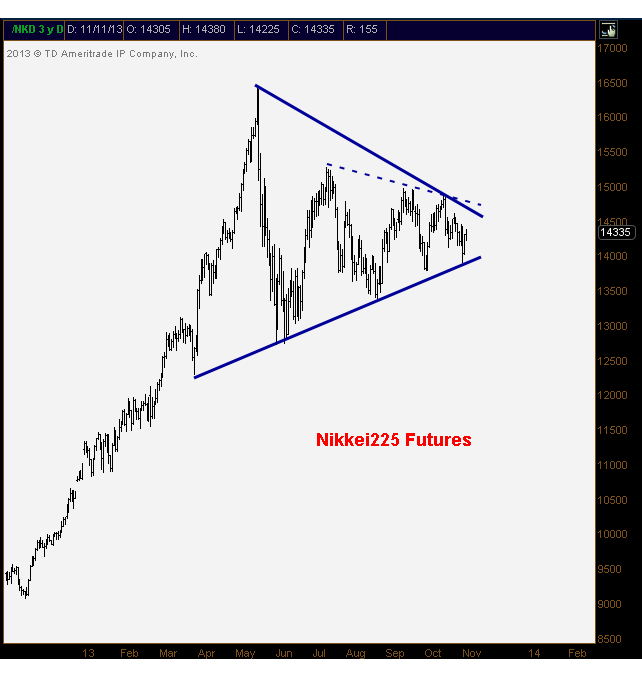 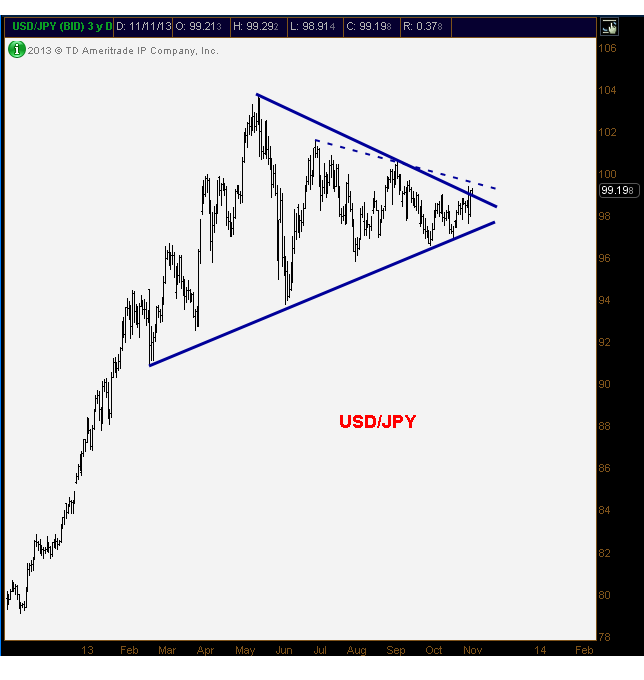 Now here’s the thing. When technicians look at these charts, we’re trained to presume that the consolidation will eventually breakout in the direction of the underlying trend, which in these two cases would be to the upside of course. But it’s not just us in the chart community, the fundamental guys are all over this one as well. In fact, I can’t find a single person that doesn’t think these two charts break out to the upside. It’s almost like blasphemy if I bring up even the possibility of a sell-off in Japanese Stocks or a rally in Yen.

And that’s when things get interesting…. (see: Is Apple Stock About to Crash?)

So now that we know these charts are “obvious buys” and we can’t find anyone to disagree, let’s play a little devil’s advocate….I mean just for fun….

One of the things that we pride ourselves on at Eagle Bay Capital is the ability to analyze securities on multiple timeframes. We start with longer-term weekly & monthly charts and work our way all the way down to 10-minute candles for entries and exits. This to me is the only way to analyze markets. Otherwise, I believe you’re limiting yourself big time. Here’s what I mean. Sure, the daily bars in the charts up above are sexy as hell – no arguments here. But the monthly’s don’t have that kind of sex appeal. We’re basically going from Kate Upton to Rickie Incognito.

This is a 25-year monthly chart of Nikkei 225 showing the 2013 rally in the first half of the year topping out at a mufti-decade long downtrend line. Should we be surprised that this is where it stalled? Would it be responsible of us as market participants to just assume that we’re going to breakout of a multi-decade downtrend, just like that? 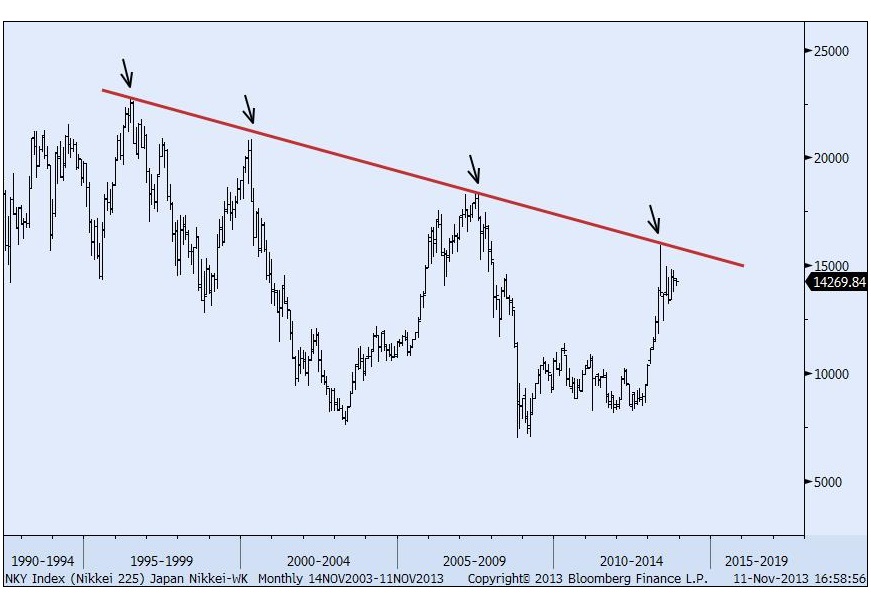 Now, it gets better. Here is a monthly logarithmic scale chart of Dollar/Yen going back to the 1980s. We find ourselves in a similar predicament as the Nikkei runs into a multi-decade long downtrend line. But to make matters worse, we are also running into what was formerly key support late in 1999 and again in early 2005. If we’ve learning anything in technical analysis is that former support should become at least some resistance. So with all that in mind, would it be responsible of us as market participants to just assume that Dollar/Yen is going to breakout of a 30 year downtrend AND break through former support on the first retest in almost 5 years? 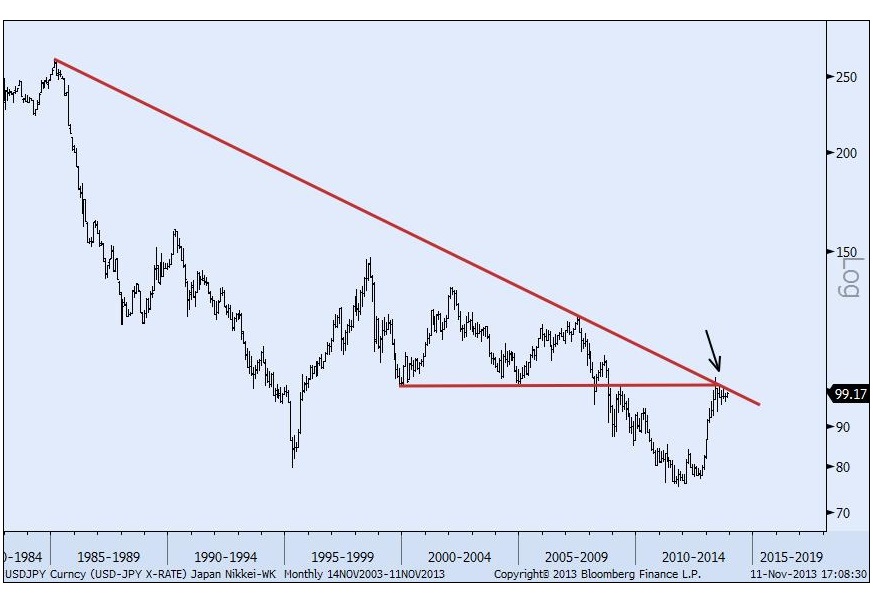 Think about that for a minute….

So what’s the conclusion?

Well, the title of this post is “There’s a Big Move Coming in Japan”. And I firmly believe that. When we see a six-month long consilidation coil in the ways that Nikkei and Dollar/Yen have this year, the resolution is typically violent. So yes, I think there’s definitely a big move coming. It’s the direction of that move that gets tricky.

Considering I don’t know a single person that thinks that resolution will be to the downside, has me thinking that’s precisely what will occur. In addition, after looking at the longer-term charts, it wouldn’t surprise me one bit to see them break down. In fact, I’d almost be surprised if they didn’t break down, when you take all this historic resistance into account.

So are you sure that Japanese Stocks are a lock to head higher? Will Yen definitely break down?

You better check that conviction and figure out a way to manage risk in the small tiny slightest chance that you might be wrong….

I was walking down Broadway the other day with my pal Jonathan Krinsky over at MKM Partners. He’s probably the only other person I know bringing up these longer-term Japan charts. As we’re chatting about Japanese stocks, he brilliantly brought up an interesting scenario that I hadn’t yet considered. How about a breakout in both of these charts to get everyone’s attention and bring out all the bulls, followed by a rollover. One last false move to crush everyone’s hopes and dreams. I must say that I think that could setup for the most incredible trade of the year.