Stocks are stuck in a range that I think will be difficult to get out of anytime soon. The best cure for the S&P500’s current dilemma is probably going to be time.

A couple of weeks ago, the large-cap index broke below key support levels from the March lows. This was a critical breakdown in my opinion, because it damaged some of the charts on a more intermediate-term basis. The problem this caused was newfound resistance on any future attempts to get back above the 1340-1370 area. We also have a declining 50-day moving average that just rolled over hanging around the same levels. This brings in supply, making it more difficult to get back above there very quickly.

Now on the low end, the S&P500 currently is battling it out with some important support. The 1270-1290 level is going to be key, because it served as big time resistance in the fall. When the S&Ps broke out to start the new year, stocks left that resistance in rear-view mirror. The polarity there combined with an upward sloping 200-day moving average makes this an important floor for stocks. 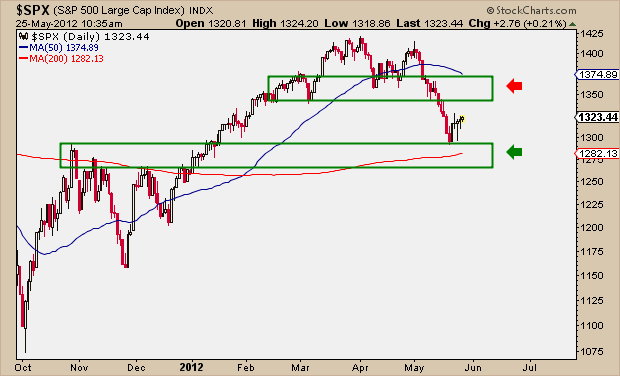 This 5-7% range is likely to stay as a home for stocks in the near future. I don’t see anything out there convincing me stocks should have a dramatic breakout or breakdown soon. Markets don’t always have to be trending higher or lower. Sometimes, especially after a monster move like what we’ve just seen, the major averages need to digest a bit.

I think this sideways, frustrating environment is here to stay for the time being. And I don’t think there’s anything wrong with that. There are other asset classes out there making big moves – both up and down. I’d look elsewhere if you’re a short-term trend follower – nothing here to see in that respect.