We’ve been giving the CRB Index a lot of grief throughout the year. The consistent under-performance since last August had just been too disappointing to ignore (see here). For nine consecutive months, the Commodities benchmark had under-performed the S&P500. But that trend began to reverse this summer. Since June, we’ve actually seen the opposite: Commodities are now leading the way. But there is still some work to be done.

There is some serious resistance that the CRB index has in front of it. The widely accepted benchmark for commodities has quite a battle on its hands. Take a look at the chart below. Nothing wrong with grabbing a crayon and drawing a straight line connecting the peaks. From the highs last May, resistance shows up right here. The more conservative trendline from the July highs also takes us right here to current prices. 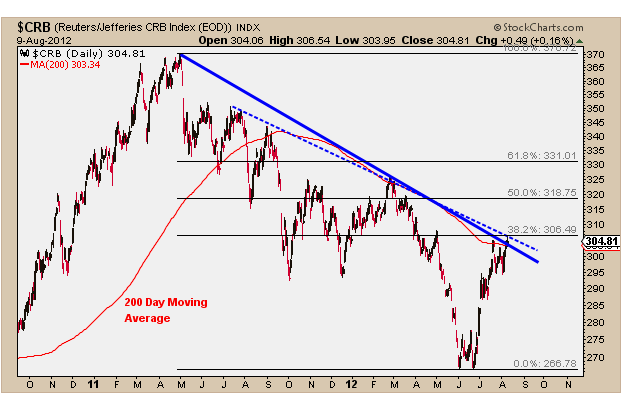 Then we’ll move over and see what our favorite smoothing mechanism is up to. And it turns out that the popular 200-day moving average is, what do you know, right here at current prices. And finally, the 38.2% Fibonacci Retracement from last summer’s highs to this summer’s lows is also right here.

So let’s recap all of the resistance:

*and we can get into some polarity stuff happening here as well but let’s just leave that alone for a minute. I think we’ve busted CRB’s chops enough today.

I think the point I’m trying to make is that there is a serious battle going on right here in Commodities. As bad as they looked for so long, they’re trying their hearts out to fix the situation. But this 300 and change level is trouble.