One thing that we have consistently been talking about here on Allstarcharts is the Dow to Gold Ratio. This trend has been large and in charge. See: Gold Outperforming Stocks For a Decade and Stocks Priced in Real Money (Dow vs Gold).

Today the Dow Industrials priced in Gold hit new lows. Yes we are now below the March 2009 lows: 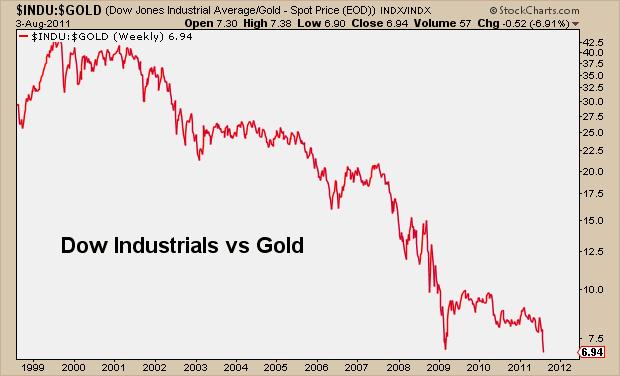 Peter Bookvar over at The Big Picture Blog pointed out today that:

This trend of Gold outperforming Stocks has been in place for over a decade. It appears as though nothing has changed. We’ll keep watching it, trading it, and discussing it here on Allstarcharts as long as the trend remains in place. Some historic charts of this Dow/Gold ratio give us good reason to believe that this trend will continue until the Dow Jones Industrial Average and Gold are at about the same price.