The U.S. stock market remains stuck in a five to seven percent range. While the action may seem frustrating on the surface, I think this could be a blessing in disguise for the second half of the year.

A month ago, in this magazine, we warned that the S&P 500 was entering a period that should be more range bound than trending. After close to a 30% rally off the early October lows, stocks have been consolidating those gains. And, there isn’t anything wrong with that.

Stocks are like human beings—we can’t just sprint and sprint and keep running forever. At one point or another we need to stop, relax, hydrate, take a nap, and then we can keep running the next day. Same thing in equities.

After such a violent move higher (I think 30% in five months qualifies), a sideways correction is much more constructive than a deep sell-off. When S&Ps broke their key support levels in early May (below 1360 or so), it did some damage to the charts. That former support should serve as resistance going forward, and that’s exactly what happened this week. Prices rallied hard off the June lows and basically ran into a brick wall of sellers at the former support. This is normal and I think it would be naive for us to expect anything else. 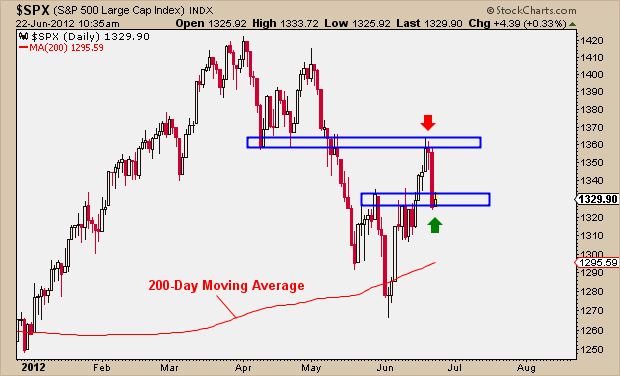 Prices should not be able to break though that resistance on the first attempt. Realistically, it should take a few tries before breaking out, and this normally takes some time. Of course you’re going to get headlines about Europe, and Bernanke, and debt downgrades, but don’t be fooled —former support turns into resistance —and it’s as simple as that.

Now to the downside, we have a few key levels of support that we’re watching. The first is 1325-1330 in the S&P 500 that was resistance in late May. So far, this is holding and has served as solid support.

If this level does not hold, a retest of the 200-day moving average down just under 1300 is probably in the cards. But we’re in the camp that these pullbacks should be bought. Eventually, whether it is later this month or after the July 4th holiday, we should break out of this range and go on to retest those 52-week highs at some point in the third quarter.

If we start to break down below the 200-day and can’t stay above it, then we’ll have to reevaluate our bullish position. But because of the smoothing mechanism’s upward slope, we believe that this is a low probability scenario. Bottom line? We don’t want to fight this buoyancy in stocks.