As we get into 2021, the same question keeps coming, “JC, when are we going to see a correction in the market?”

While it is true that some stocks have gone up, and others have gone up a lot in recent months, the biggest stocks of them all have not.

And you know what those stocks have done since September 2nd? 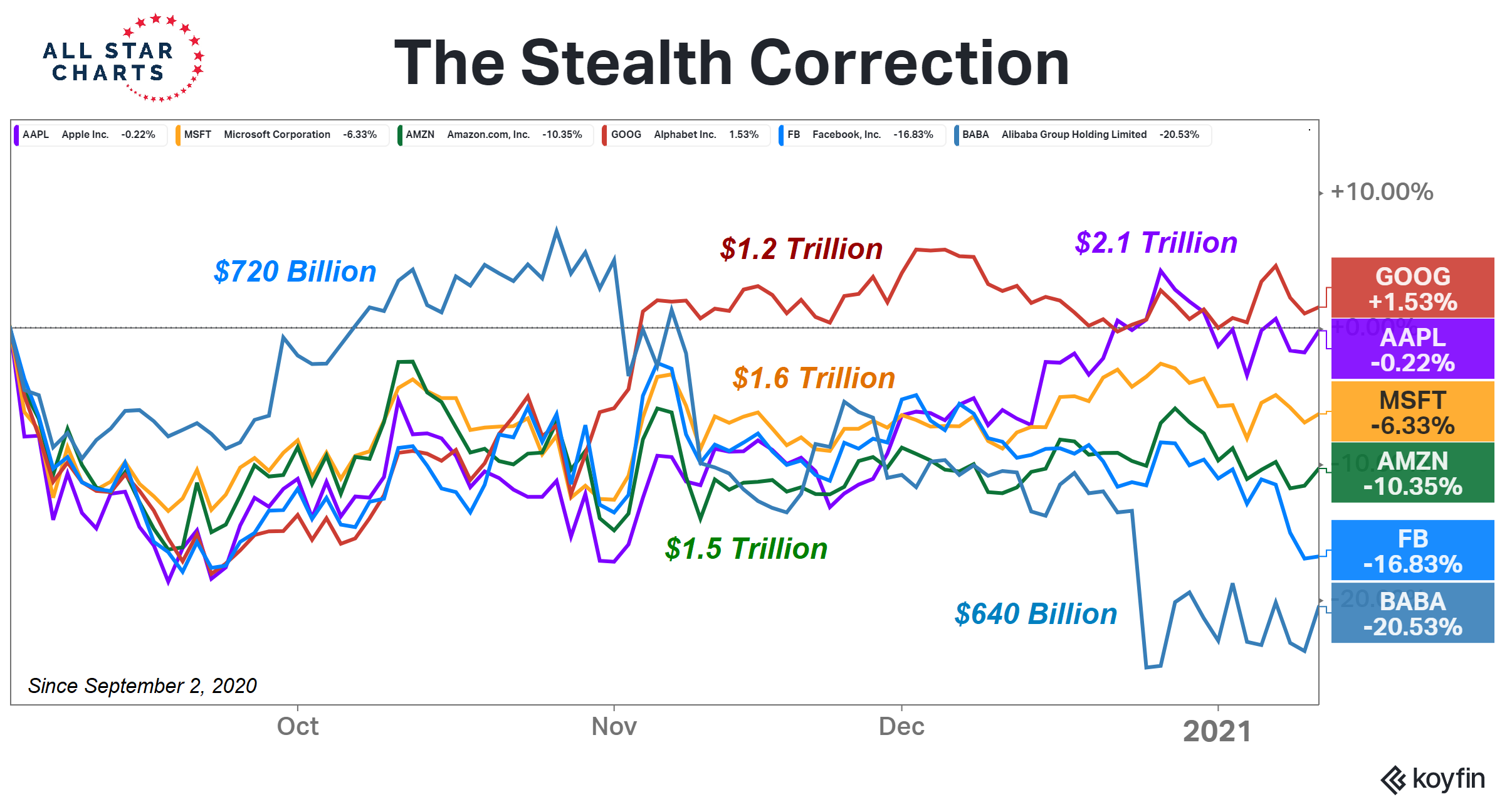 Most of them are even down a bunch.

That’s a lot of market cap. And you can throw in Berkshire Hathaway, Visa, Walmart and Nvidia and we can keep playing this game. But I think you get my point.

It wasn’t too long ago that the narrative was it was only 5 stocks driving this market higher. That was hilarious then, and even more hilarious now.

So what does this mean? So what JC???

Well, for me, I think this market is going a lot higher. Like not a little bit higher, but much much higher.

If the S&P500 is going to 4,500 and the Dow to 38,000, and we’re going to really do this, then my bet is not going to be that we get there without the participation of these stocks above. If we’re gonna go, these stocks are gonna go.

And you know what, they’ve done absolutely nothing for a quarter and half. Nothing.

So it’s not like they’re extended and need to correct and digest some gains.

You want to know what else? The resolutions in these Mega-caps are going to be information. Because sure, I think stocks and the indexes go a lot higher. And yes, I think these stocks all resolve to the upside and begin new legs higher. I think all of that.

But the market doesn’t care what I think. Sorry to disappoint you (I was disappointed too when I found out, trust me).

The market is going to do what it wants. And if these mega-caps DON’T resolve higher, and in fact, resolve these consolidations lower, then that’s information. It most likely means that the little guys are going to come off as well. It becomes a liquidity thing.

The alpha has been in the SMID’s, to put it in the parlance of the “finance business”. Small-caps and Mid-caps are where the home runs have been. You guys see that in our 2 to 100 Club, Minor Leaguers and Under The Hood Reports.

So we’re watching. We’re buying breakouts in these Mega-caps. I think they happen soon. And I think the Indexes go much higher.

If we get new information, we’ll adjust accordingly. I’m open-minded.

But the higher probability outcome here, in my opinion, is a monster move higher in stocks.

Ping me. Let me know what you think.