The six-month uptrend in the S&P500 was finally broken today. Six months of face-ripping gains. Six months of top-callers being wrong. Six months of some of the “worst” stocks outperforming some of the “best” stocks. I mean Bank of America doubled in 3 months. Doubled. JP Morgan was up just 50% during that December to March period. Is Bank of America twice as good a company as JP? No, it’s just that market participants were caught on the wrong side of the trade. And that’s the sort of mispositioning that causes awesome moves like this.

Here is the chart that shows the 6-month uptrend in the S&P breaking today: 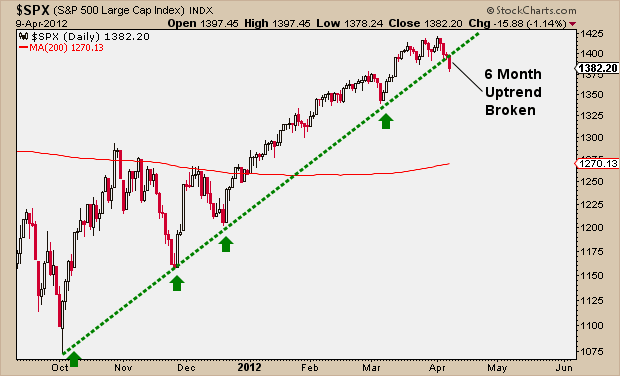 A lot of market participants draw simple trendlines and make decisions based on a trendline break alone. Smart guys I know do this. I can be little bit more flexible at times. I mentioned in a recent post that the 1370-1375 area was key support that had to hold. So far it has held, but the sectors where I was looking for strength to confirm any buying, underperformed once again on Monday.

So I think the chances of 1370-1375 holding are not very good. A break below those levels and we need to go back and throw up the Fibonacci Retracements. When markets are correcting, these levels help point to areas where buyers could potentially show up.

Here is what makes our lives difficult; which low do we use? The October 4th low? November 25th low? or the December 19th low? All of these marked the beginning of important rallies and key turning points for the market. I don’t know the answer to this question so we’ll just have to use all of them. And if there is a key area where these Fibonacci levels cluster together – bingo!

It’s not an exact science, but you would be amazed how many times these fibonacci clusters become key support and resistance, especially when matched up with other key technical levels. As usual, I apologize for all the lines and colors on the chart. I hate that, but we have no choice in this case. Sorry guys, bear with me.

This chart shows the Fibonacci Retracement levels from all three key lows. The blue lines represent the Octobers lows, November lows in Green, and December lows in Purple, all up to last week’s highs: 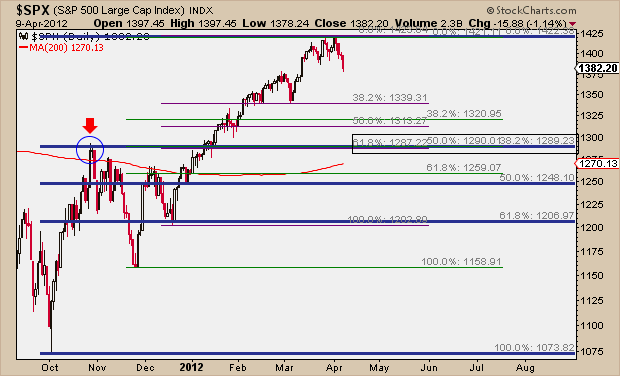 Now, does this broken trendline mean that the S&P500 will absolutely correct 10%? Of course not. In fact, a reversal back above the trendline and to new highs would disqualify all of the fibonacci levels mentioned above. But continued underperformance in the offensive sectors like we’ve seen over the past week would signal a high likelihood of a bigger correction than just the 1370-1375 area mentioned in the earlier post.