Transports this week are hitting new 6-month highs relative to the S&P500. Remember, these guys have been the leader for years. To review, the Dow Jones Transportation Average peaked in late 2014, well before the S&P500 put in its final top in May of 2015. Moving forward, the Dow Transports put in their bottom in January of this year, the month before the S&P500. So yes, we want to continue to look to the Transports for leadership.

Today we are breaking down the Transportation stocks once again to see what is really happening underneath the surface:

Here is the Dow Jones Transportation Average relative to the S&P500. This has been one we’ve been pounding the table on since late June and we are now breaking out to fresh 6-month highs. I would expect new 52-week highs in this spread in the new future as Transportation stocks continue to outperform the rest of the market: 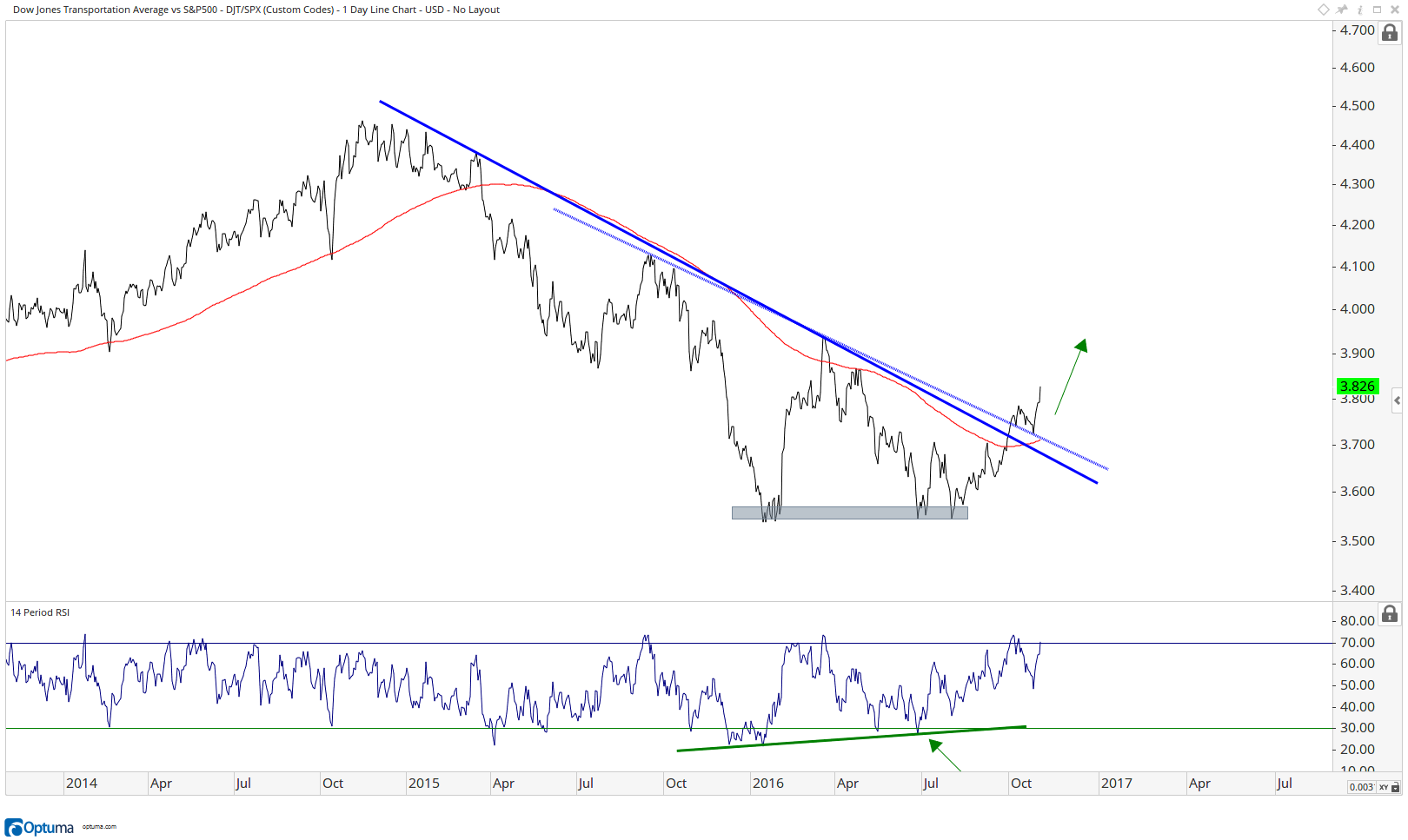 Buy side fund managers focus the most attention on two factors: Relative strength and momentum. In Transports, we clearly have the relative strength, but just as important, we also have momentum in a bullish range. While different institutions quantify these two factors in their own ways, my work suggests that Transports currently have both of these on their side. This attracts the alpha-seeking buy side managers.

As we break down what is in the Transports, we also see strength in the sub-sectors. Here is the AMEX Airlines Index breaking out above the downtrend line from the early 2015 highs. This suggests to me that we need to own Airlines. If the index is above this downtrend line, $JETS is a buy: 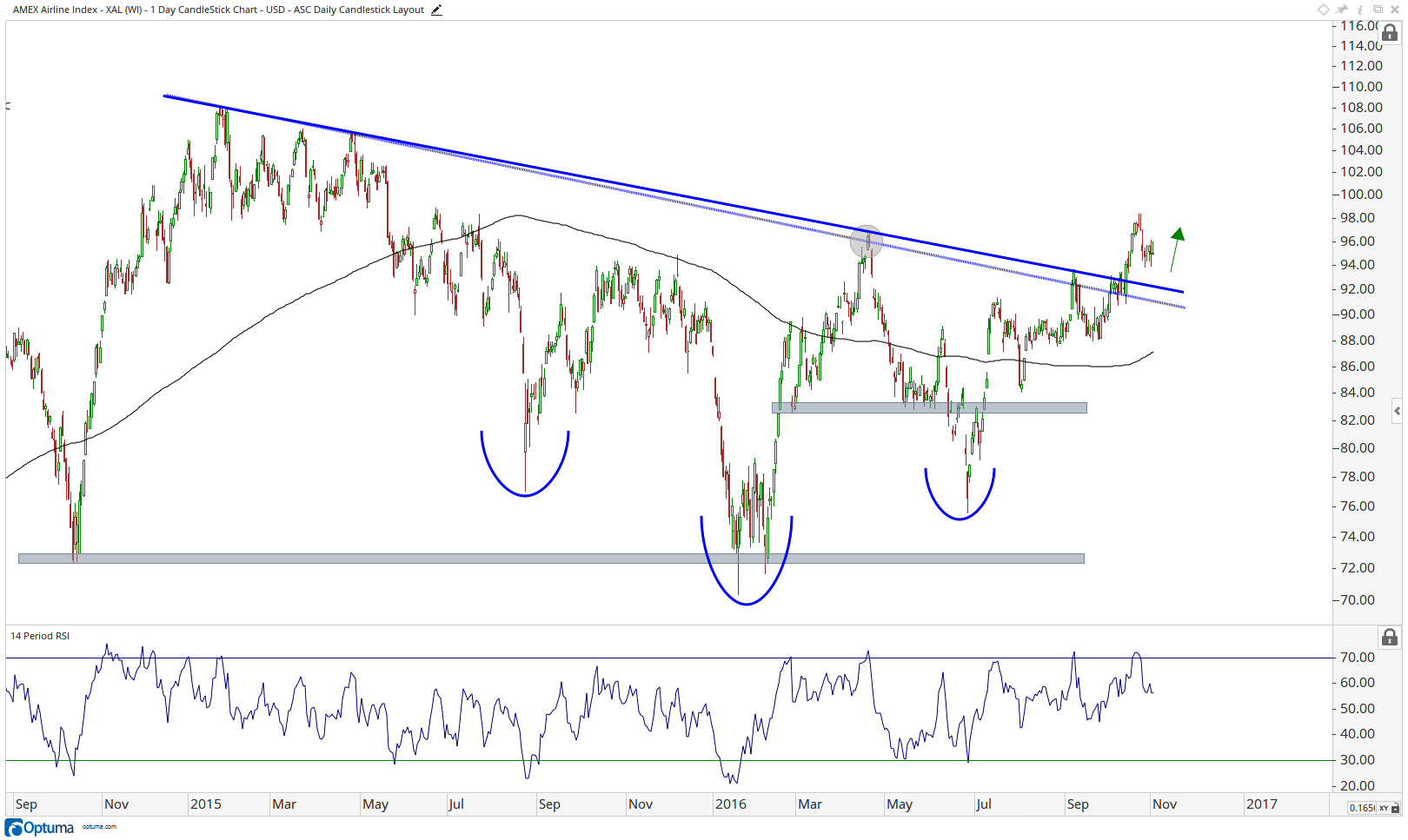 If you want to look within the Airline space, American Airlines looks similar. We want to be long $AAL if we’re above the downtrend line from the early 2015 highs: 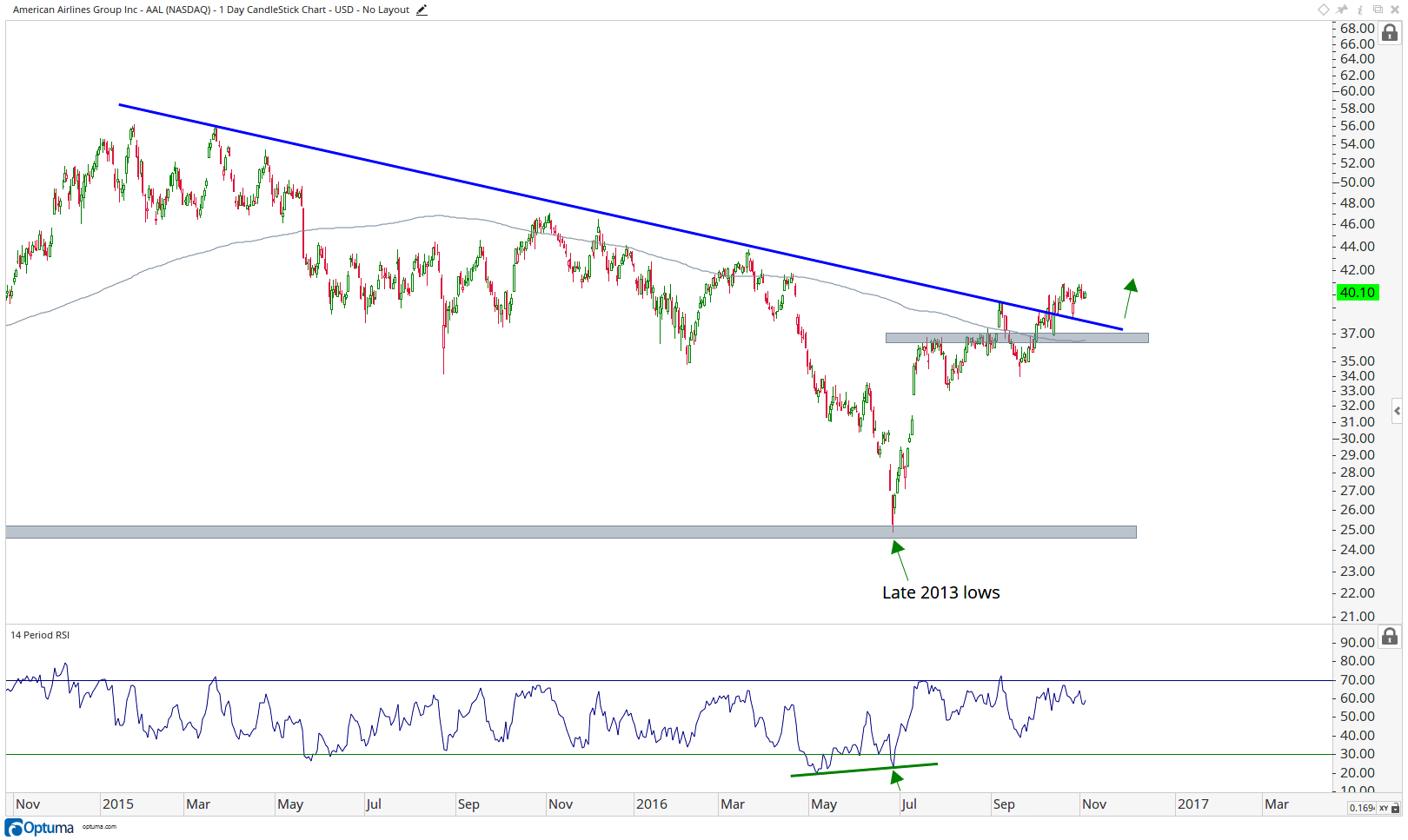 Next, here is the Dow Jones Railroad Index putting in a bottom and starting a new trend higher. What I like about this chart is that momentum has not hit oversold conditions on this sell-off. By my work, this keeps momentum in a bullish range. As long as we’re above the early August lows, we want to be buying Railroads: 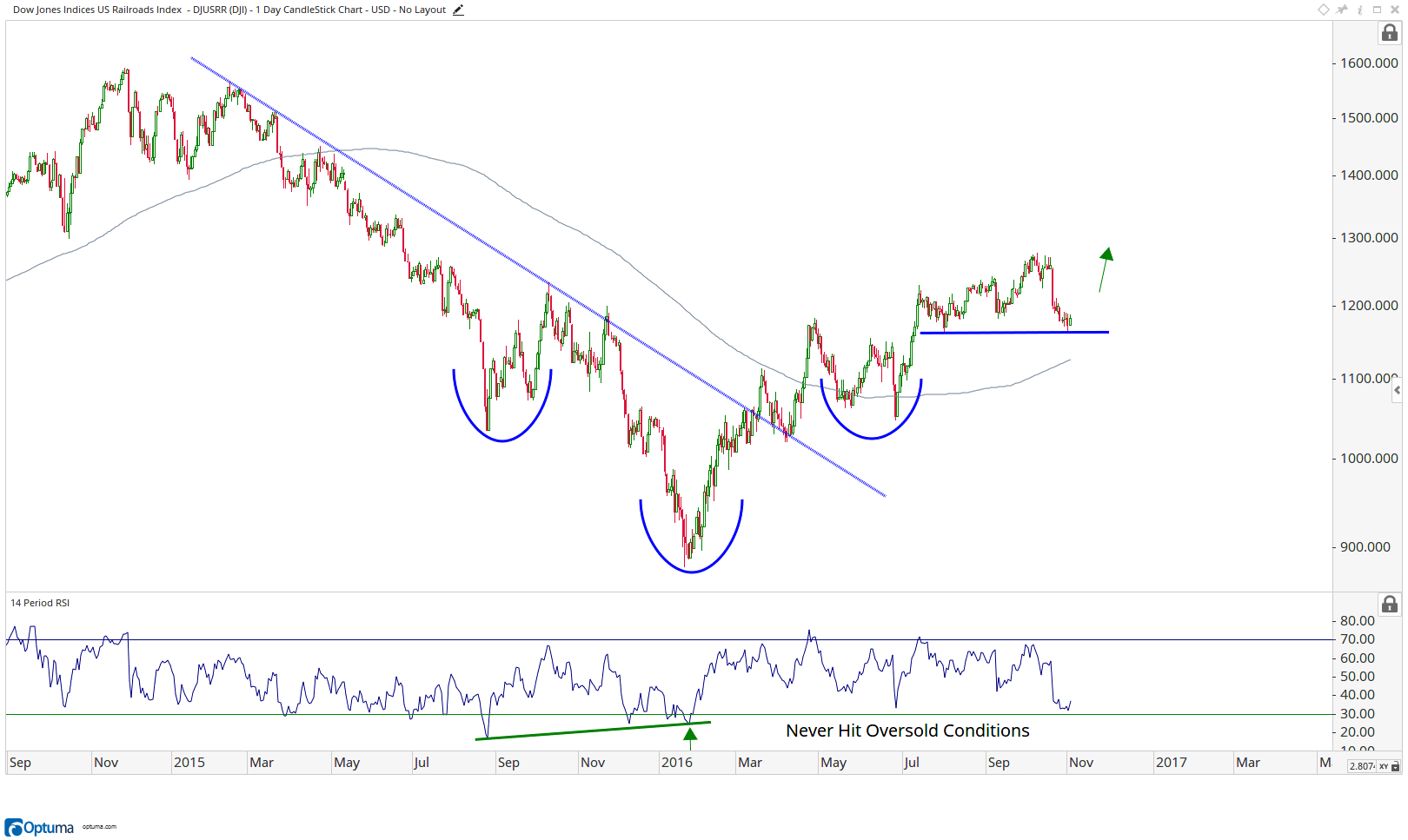 Within the Rails, take a look at CSX Corp $CSX. It looks very similar and I continue to like this name with a $38 target. We want to remain long if we’re above $29.50: 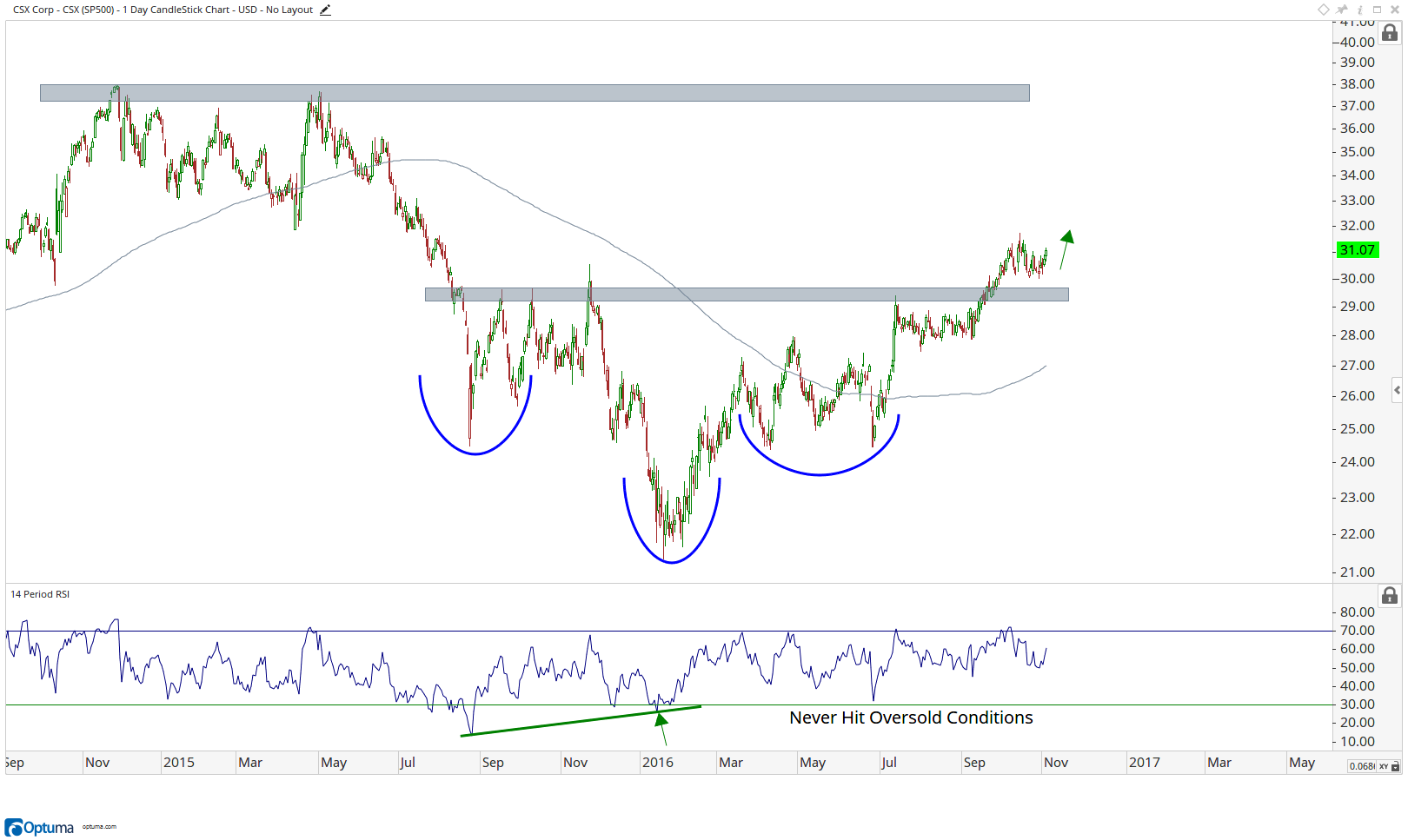 Moving over to the Truckers, to me this 6-month consolidation is resolving itself higher. Momentum remains in a bullish range and we want to be buying the Truckers if we’re above the downtrend line from the 2016 highs: 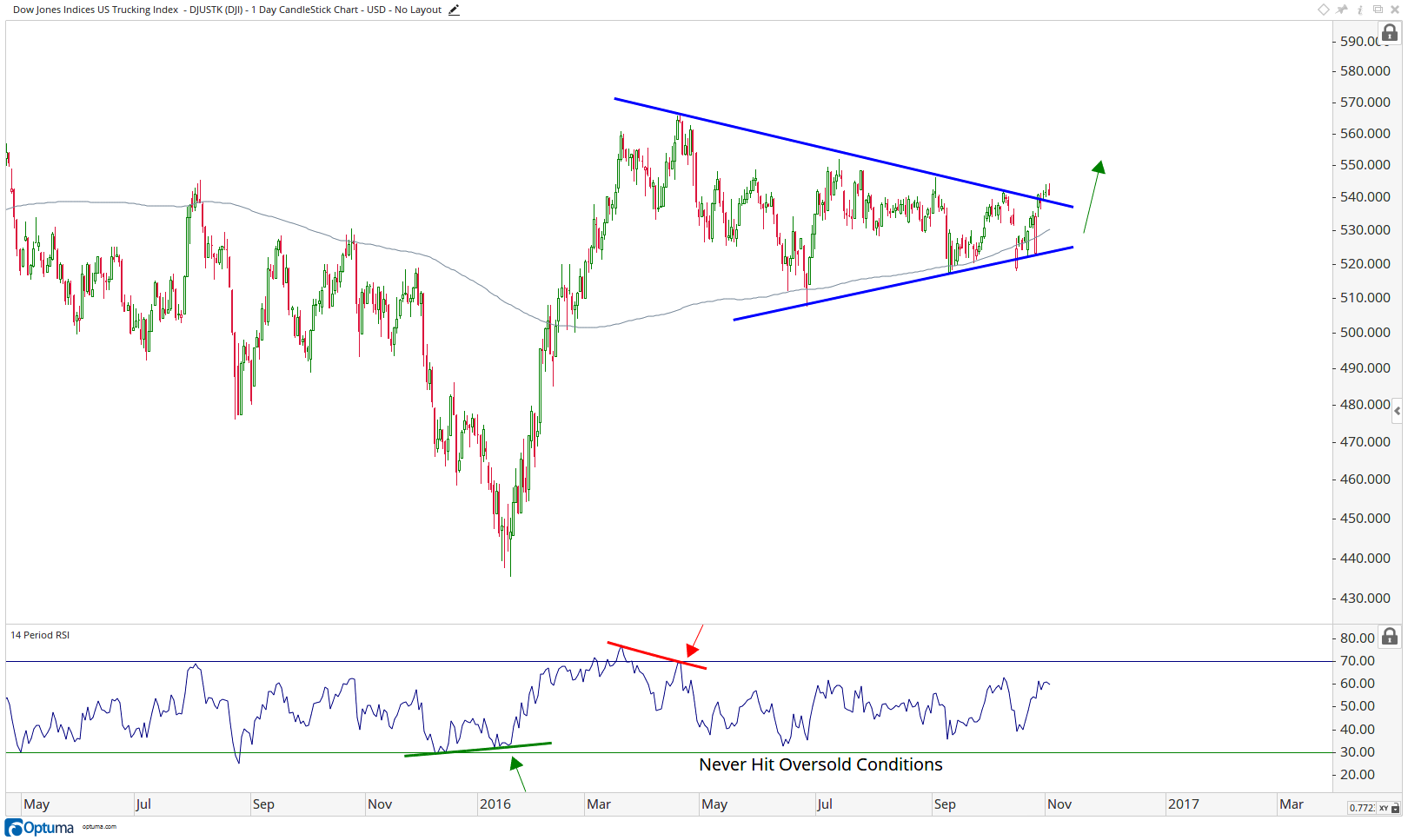 Of the Truckers, Landstar is showing some of the most relative strength. We want to be buyers of $LSTR if we’re above the 2015 highs and take profits once we get back above the all-time highs from 2014. This sets up a nice risk vs reward proposition moving forward: 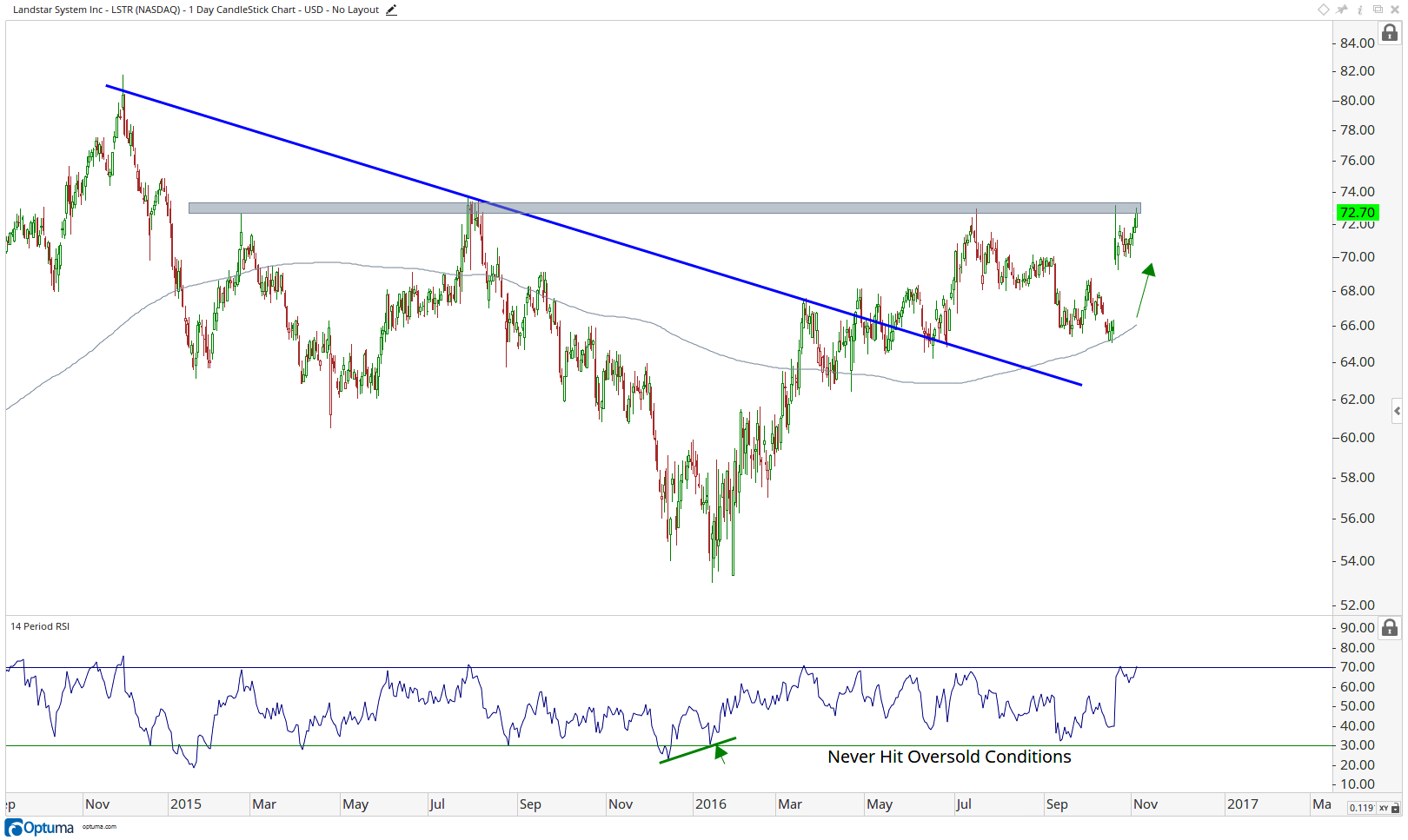 Finally, the Delivery Services are really standing out as well. Here is FedEx pushing up against 183 resistance for the 3rd time. With momentum in a bullish range, a breakout here is imminent, in my opinion. We want to be long $FDX if we’re above last year’s highs with a target up above $240: 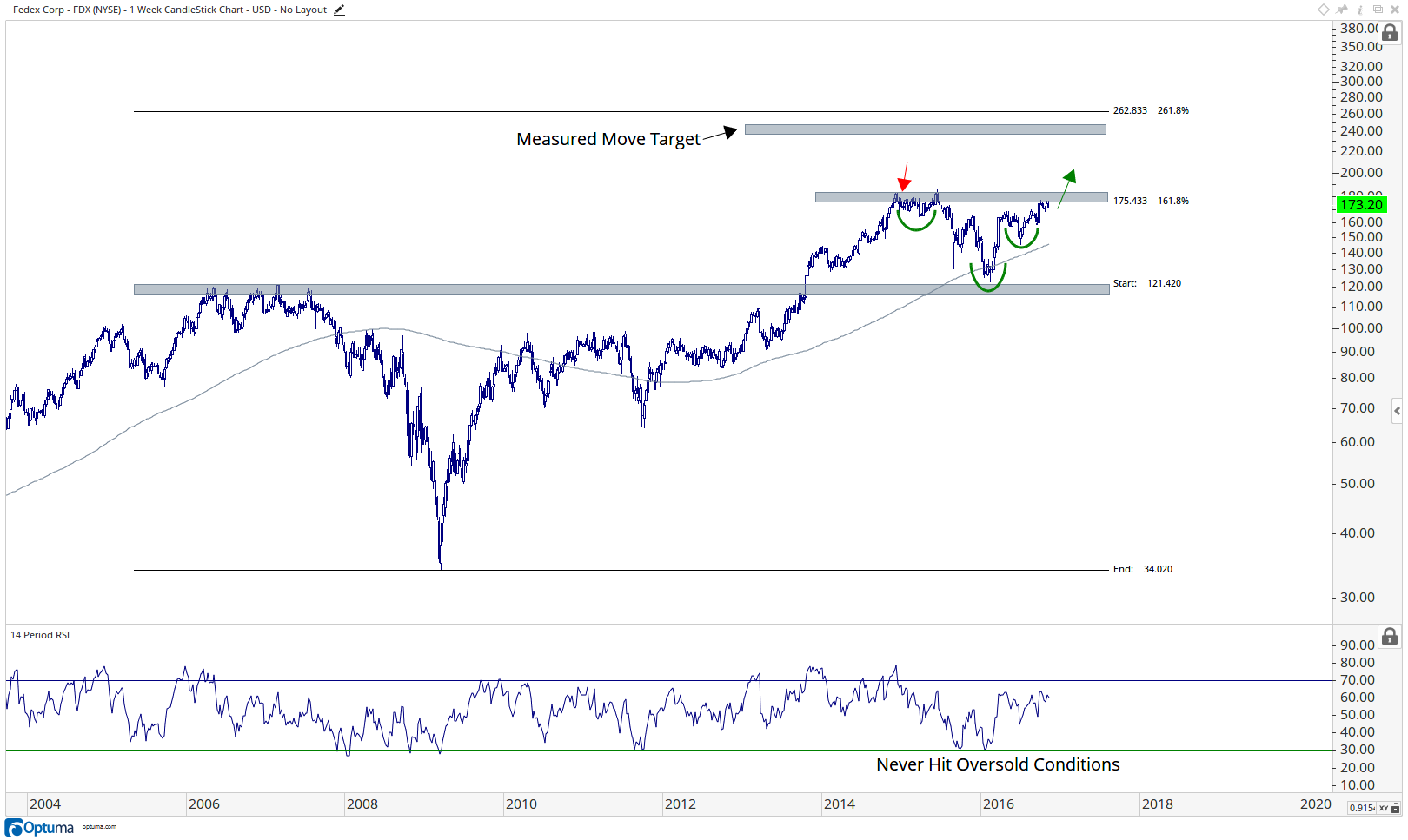 United Parcel Service $UPS also looks good. The relative strength is certainly there and momentum is in a bullish range. After this long consolidation, I am expecting a strong upside resolution. We want to be long if we’re above the downtrend line from the Summer highs. More aggressive traders can use 105.80 as the line in the sand if you already want to be in it: 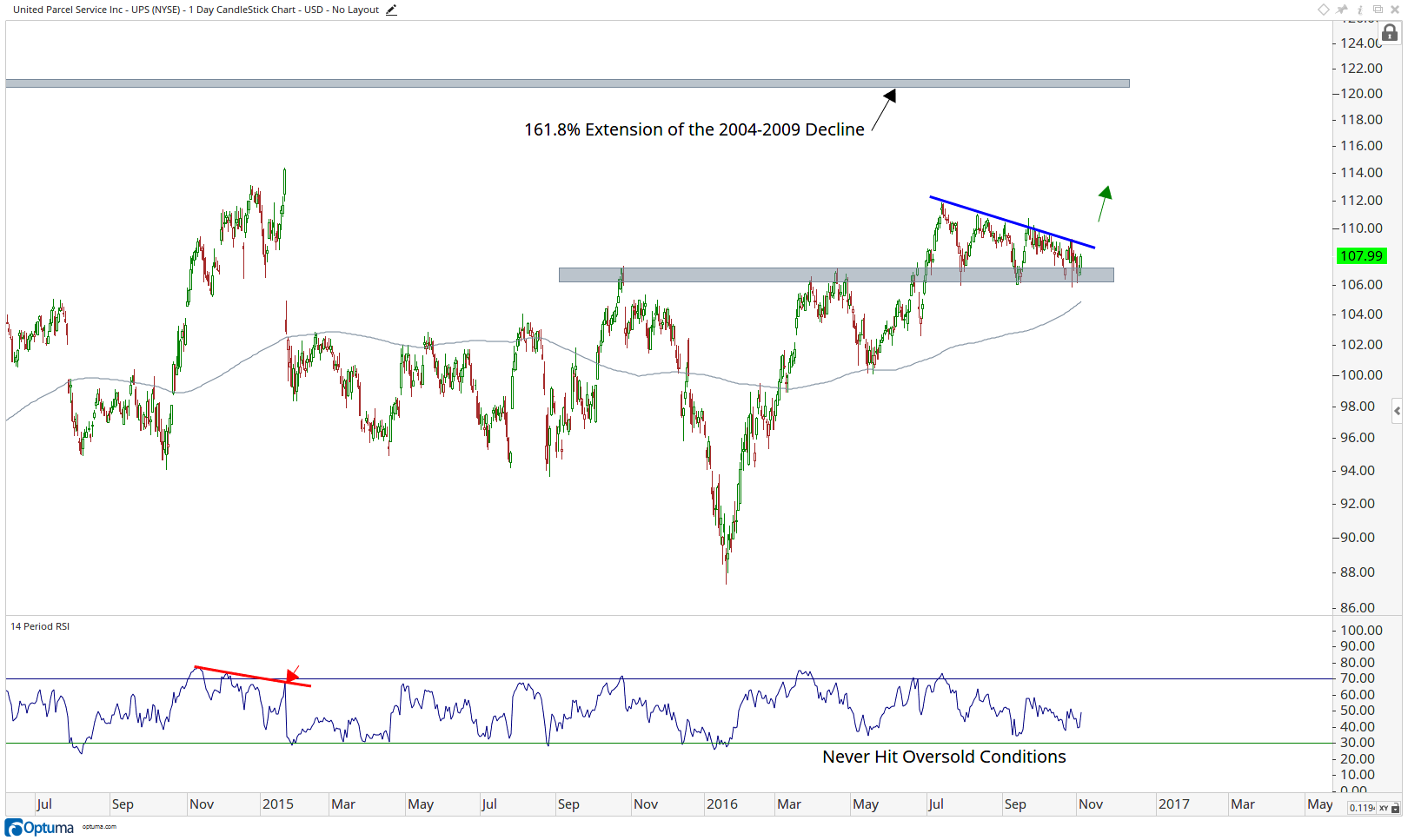 As a group, it’s hard not to like the Transportation stocks. We’re seeing the relative strength and strong momentum that buy side fund managers are looking for. But more importantly, from a top/down perspective, the group looks great relative to the rest of the market, and the strength from the individual components is also evenly distributed. We have bullish setups in each of the sub-groups. So while we want to continue to pick our spots within the Transports, I also like the group in general, especially relative to the rest of the stock market.