This is a global market environment. The S&P500 goes up and down based on the collective money flow from investors all over the world, not just within the borders of the United States. There are some people still fighting the civil war who simply don’t understand this concept. US Stocks don’t move up and down based on what is happening in America. What happens in the United States politically, economically, tax-wise, etc is just a tiny tiny piece of a humongous puzzle. This is a global market environment and the sooner you recognize that the bigger the advantage you will have over others who have not yet accepted this concept.

Even if you only trade US Stocks, or stocks local to where you live, understanding what is happening globally is essential to recognizing the direction of the underlying trend for the asset. And this trend identification is step 1 to market analysis. Today I went through every stock market index in the world to see if there is more good or more bad out there. Here are a few stand outs:

The FTSE100 closed at new all-time highs and is making a run for that 8130 level. I normally like to start with this chart for the simple reason that if the FTSE100, one of the most important indexes in the world (top 3? top 5?) is breaking out of an 18-year base, it’s awfully difficult for me to be bearish equities as an asset class. 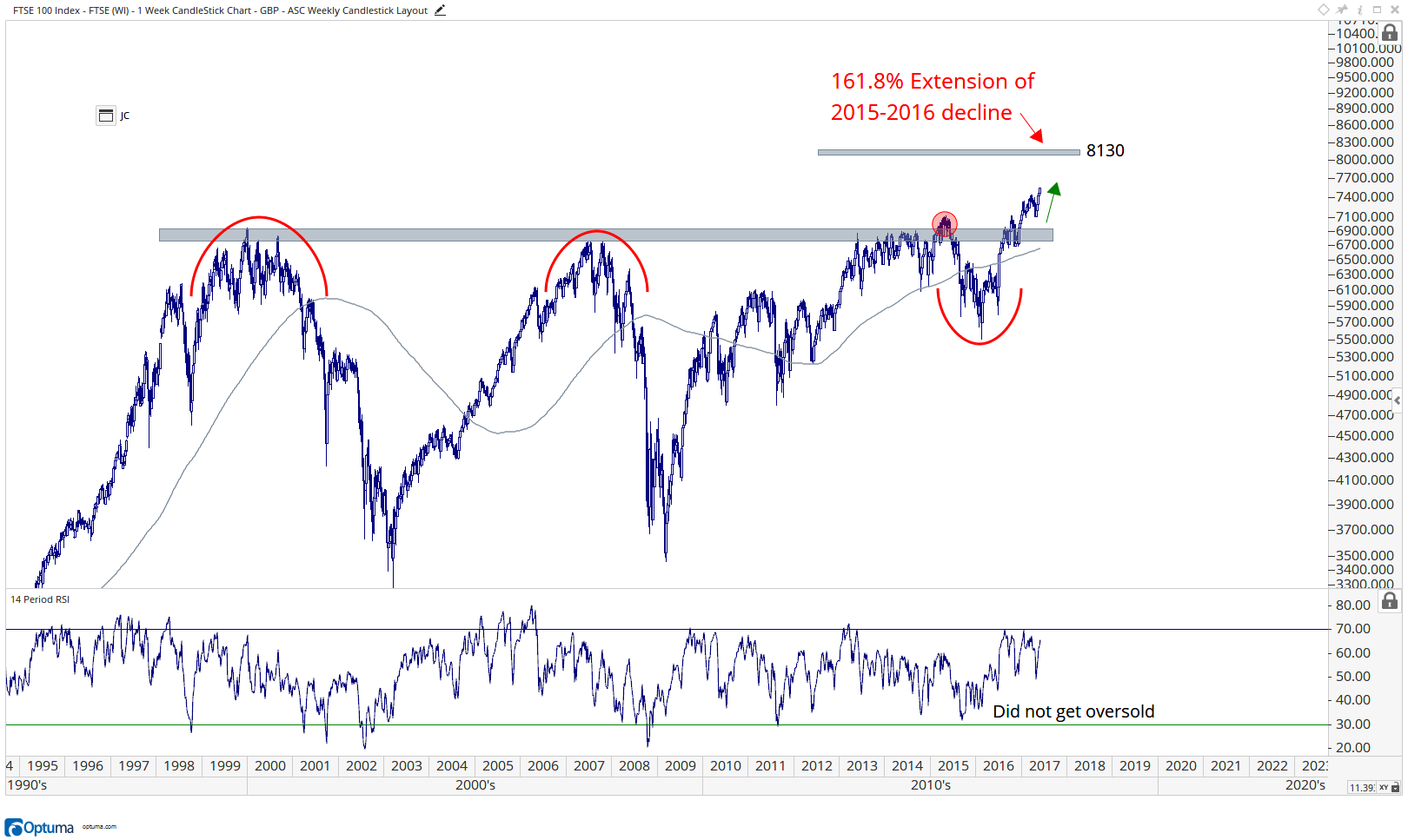 Meanwhile Europe keeps chugging along. This is clearly still an uptrend. If we’re above the 2015 highs, we can still err on the long side of Europe. I think we’re heading up back towards the 2015 highs 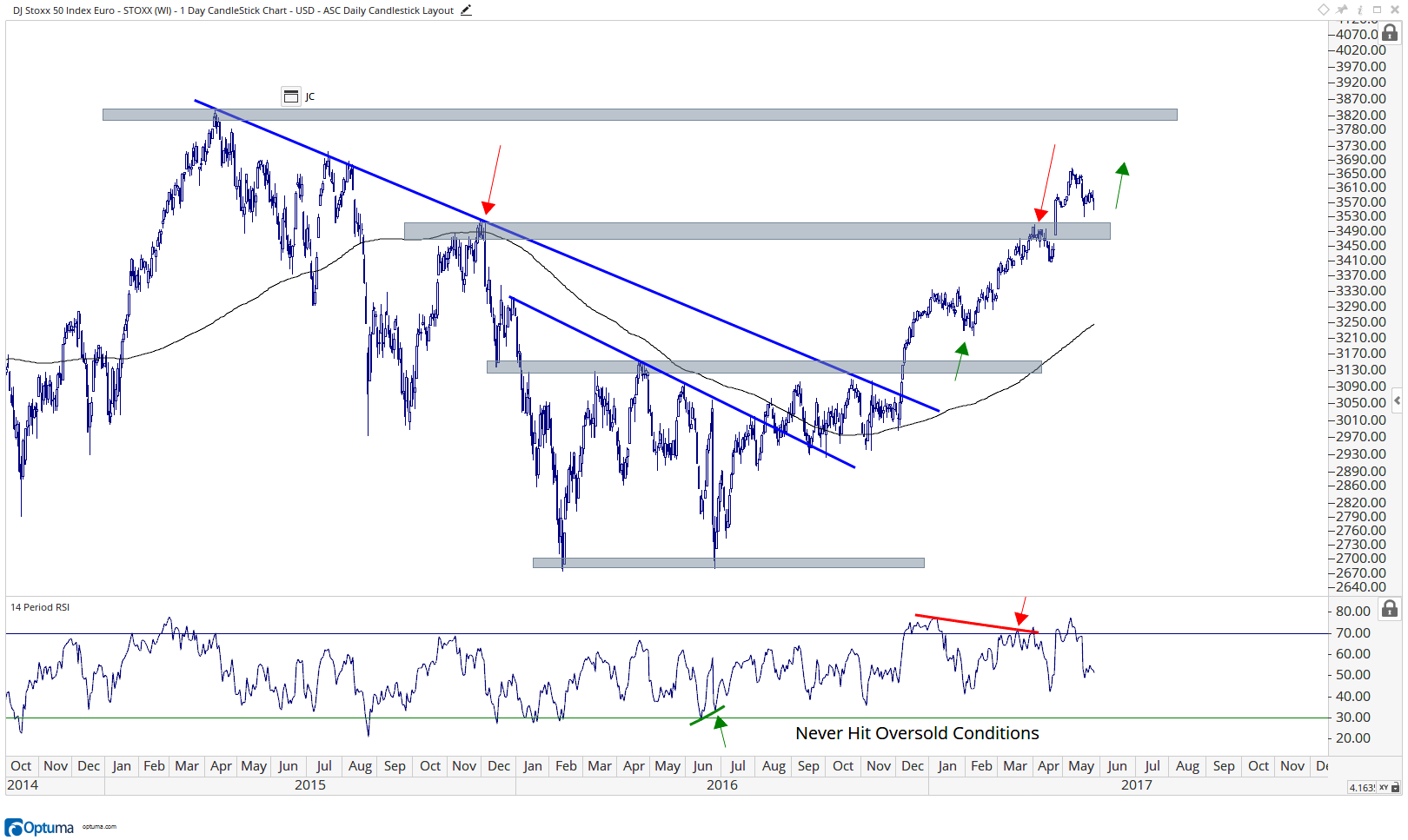 More specifically Germany continues to hold it’s breakout above those 2015 highs. Again, like in the London FTSE100, if the German DAX is breaking out of 2 year base to new-all time highs, it’s very hard for me to be bearish equities as an asset class. The upside target is towards 14,700 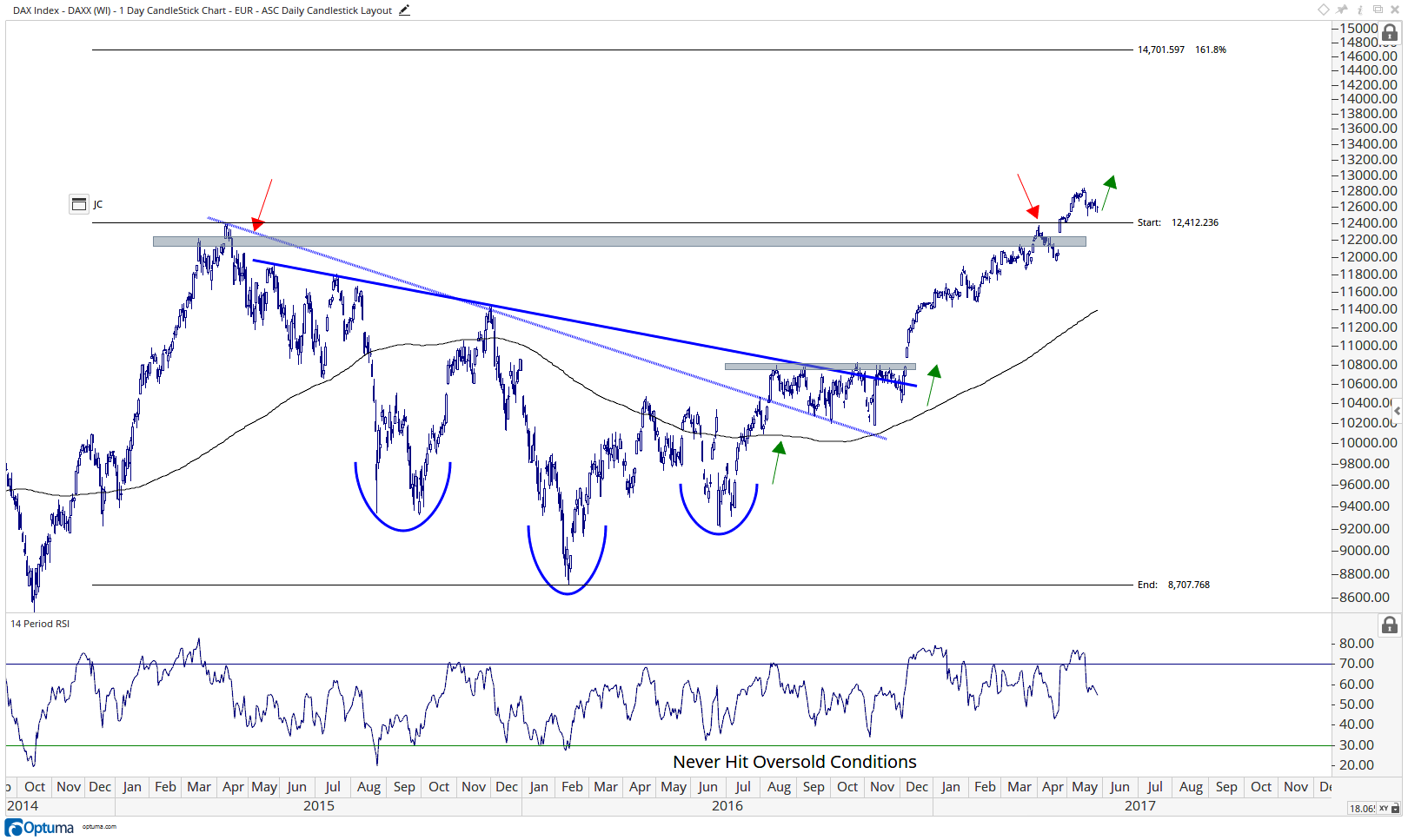 We’re seeing the same exact thing in France. I think we’re heading to 6140 in the CAC 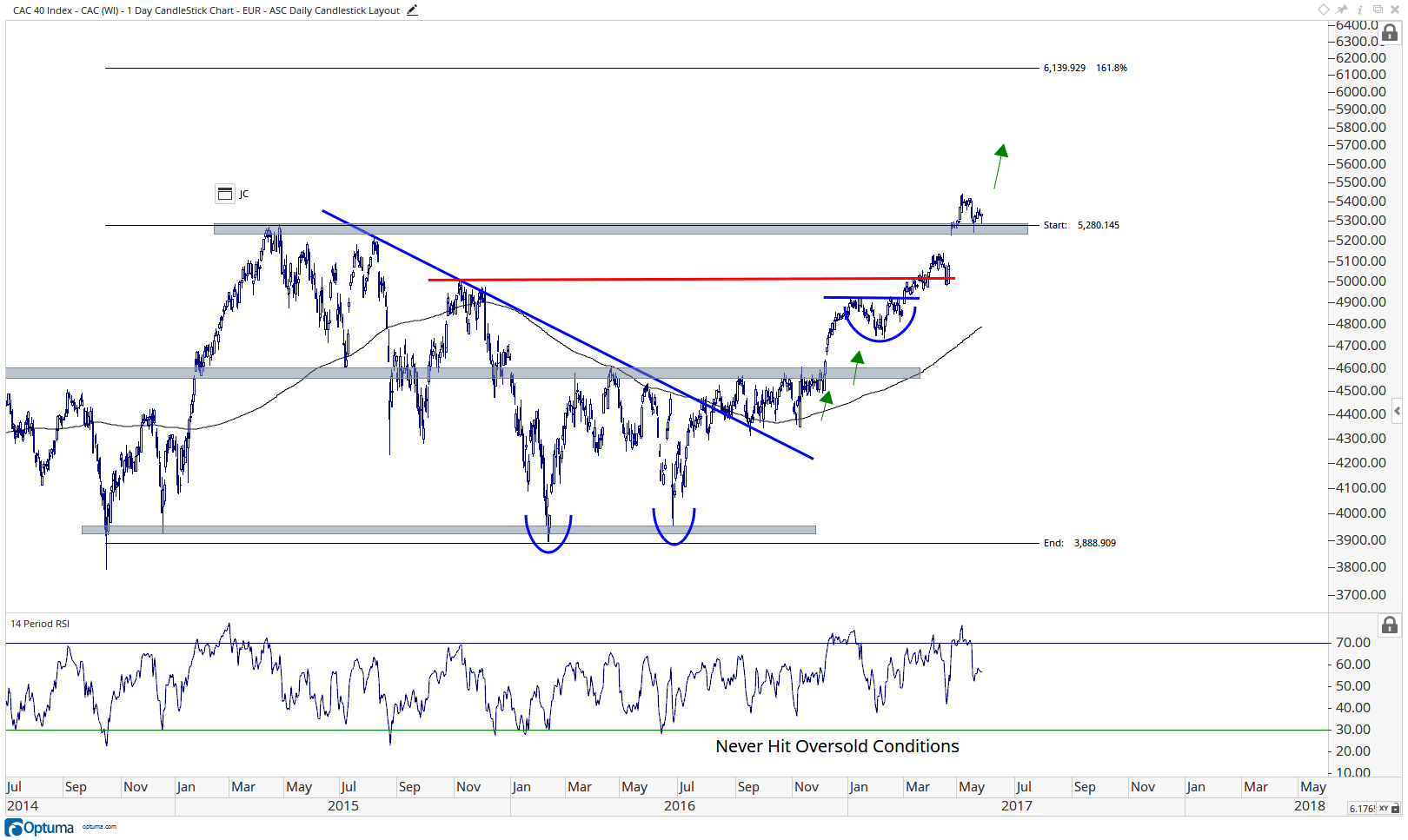 Canada still has not broken out, but I think it’s due. I love how momentum never hit oversold conditions during this multi-month correction. To me, we’ve seen enough. I would expect new highs this coming month: 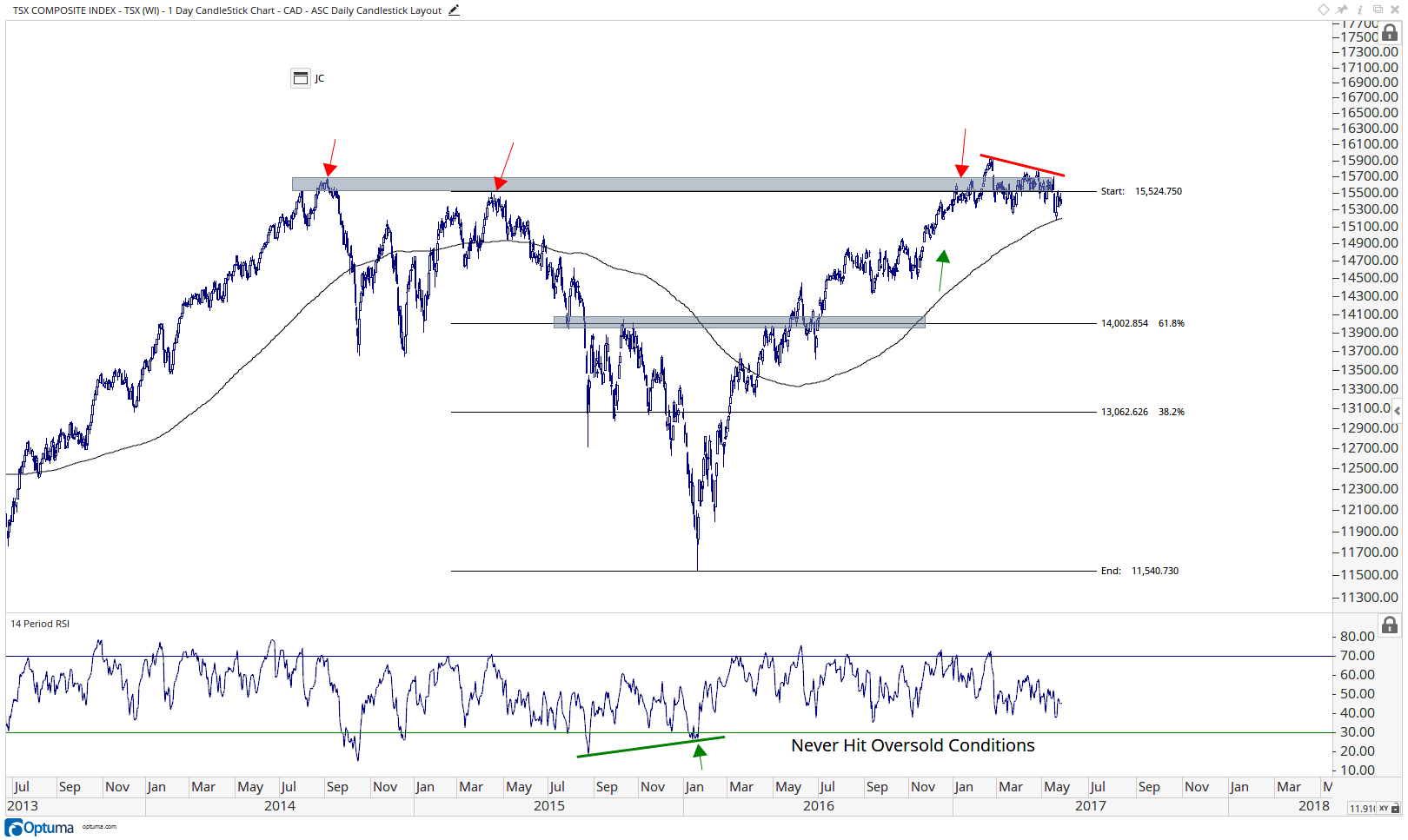 Hong Kong on the other hand is making an attempt to resolve this consolidation higher. Take away the failed breakout in the Spring of 2015 and what we have here is a 6+ year base. 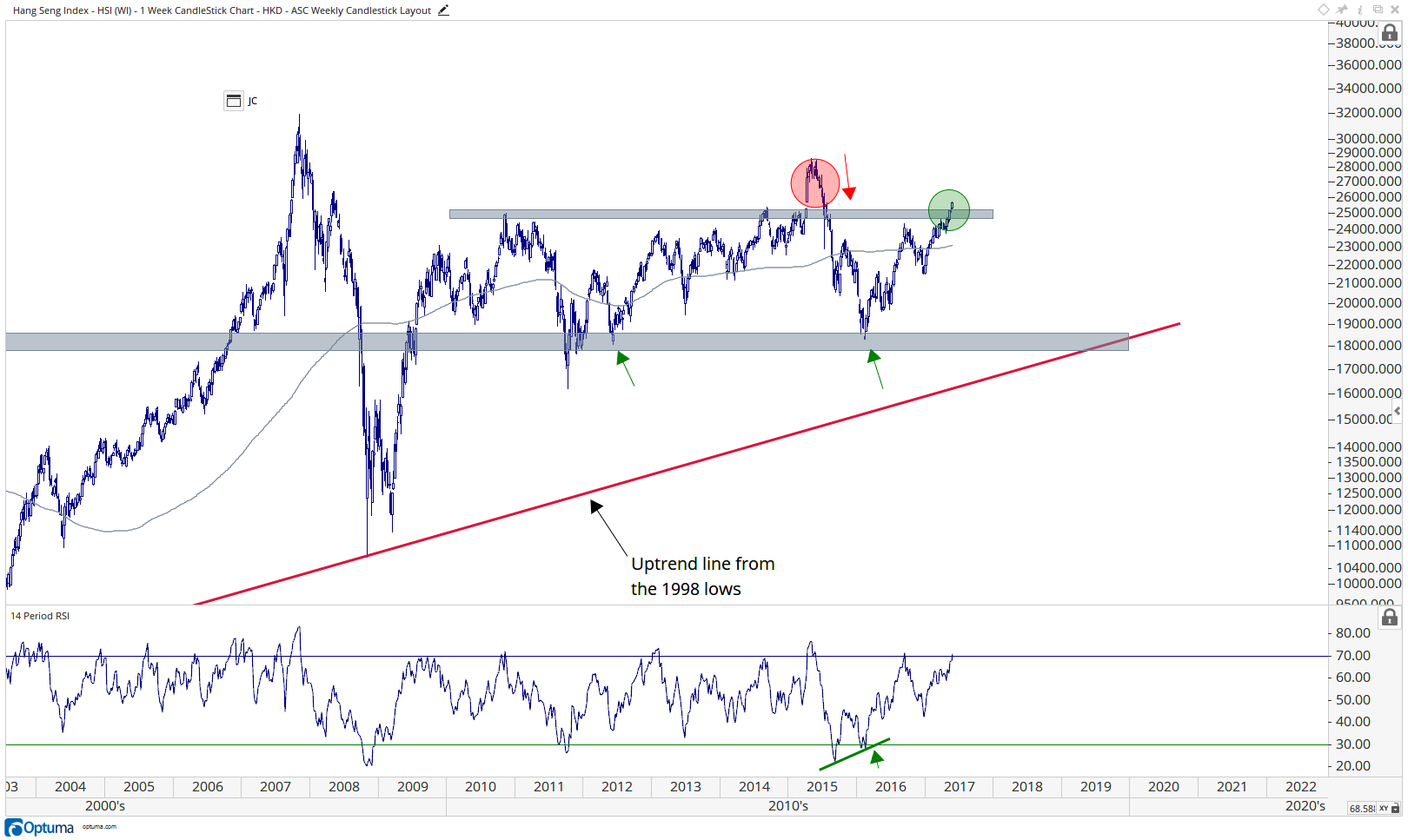 I’m looking at that 28,500 level as the target. If we’re above 24,900 we need to err on the long side of Hong Kong, again one of the most important indexes on planet earth 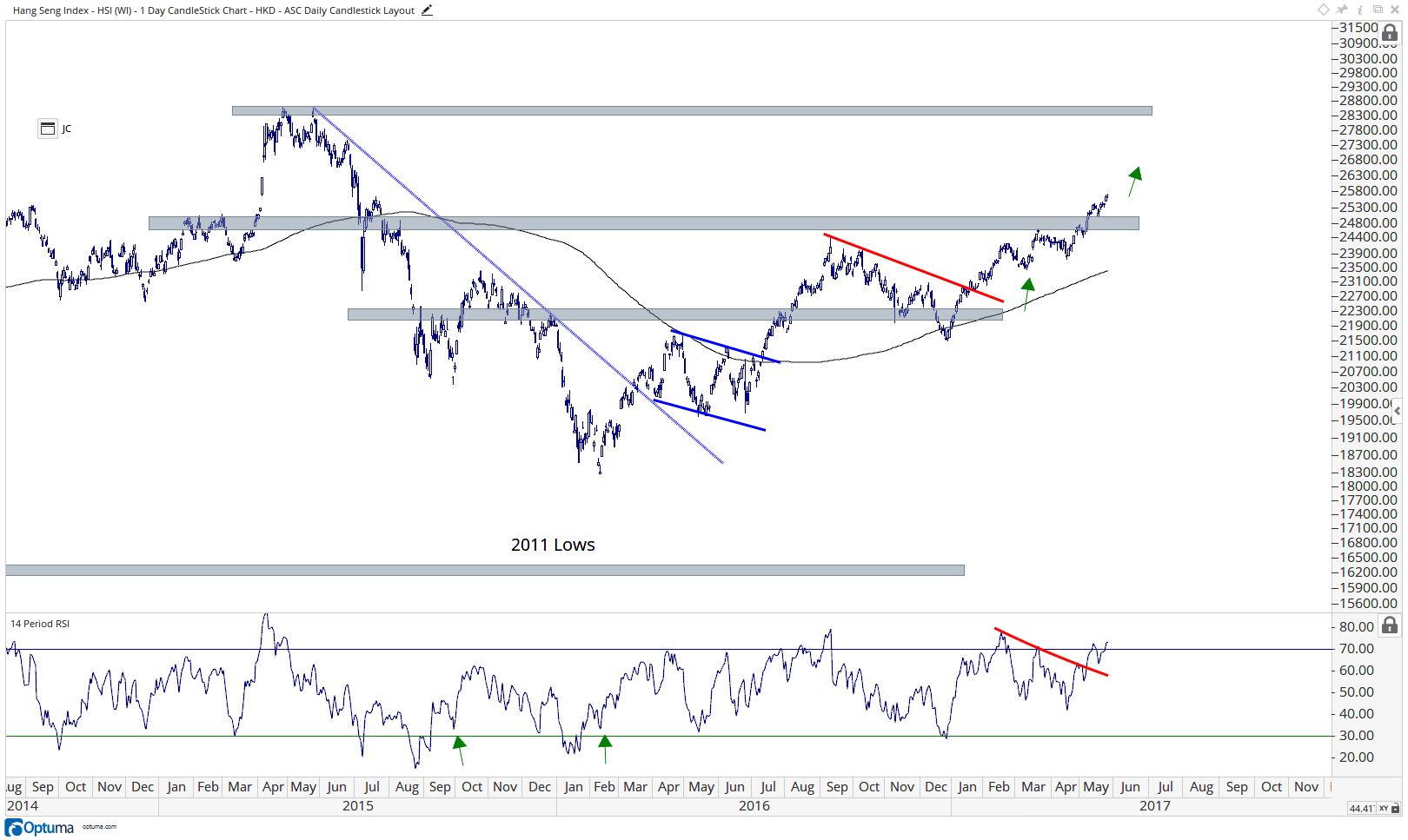 Some areas are still playing catch-up. But it doesn’t mean they’re not going higher. For example look at Singapore above 3160, which is where we want it. As long as we remain above there, the path of least resistance is higher. I still think we revisit those 2015 highs 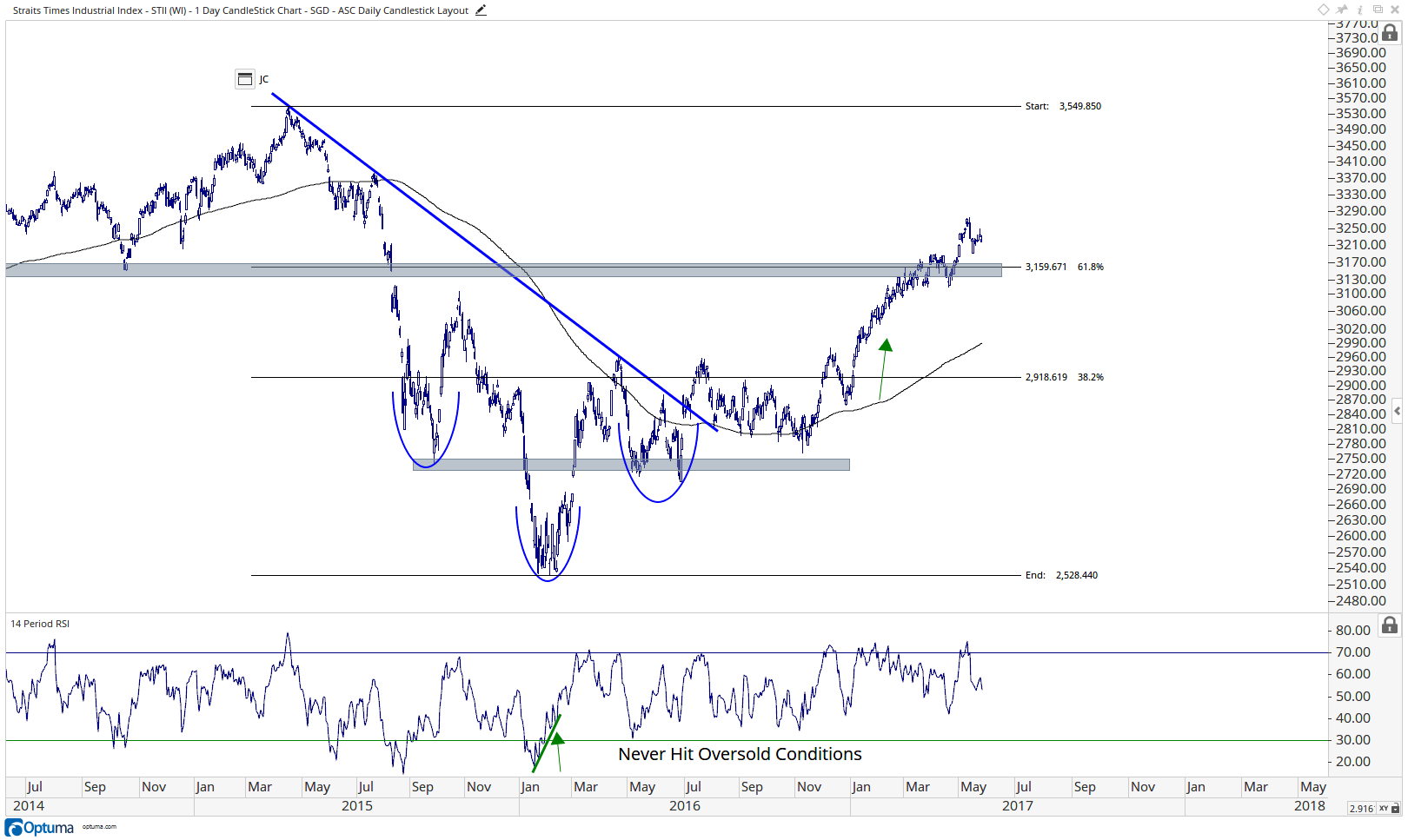 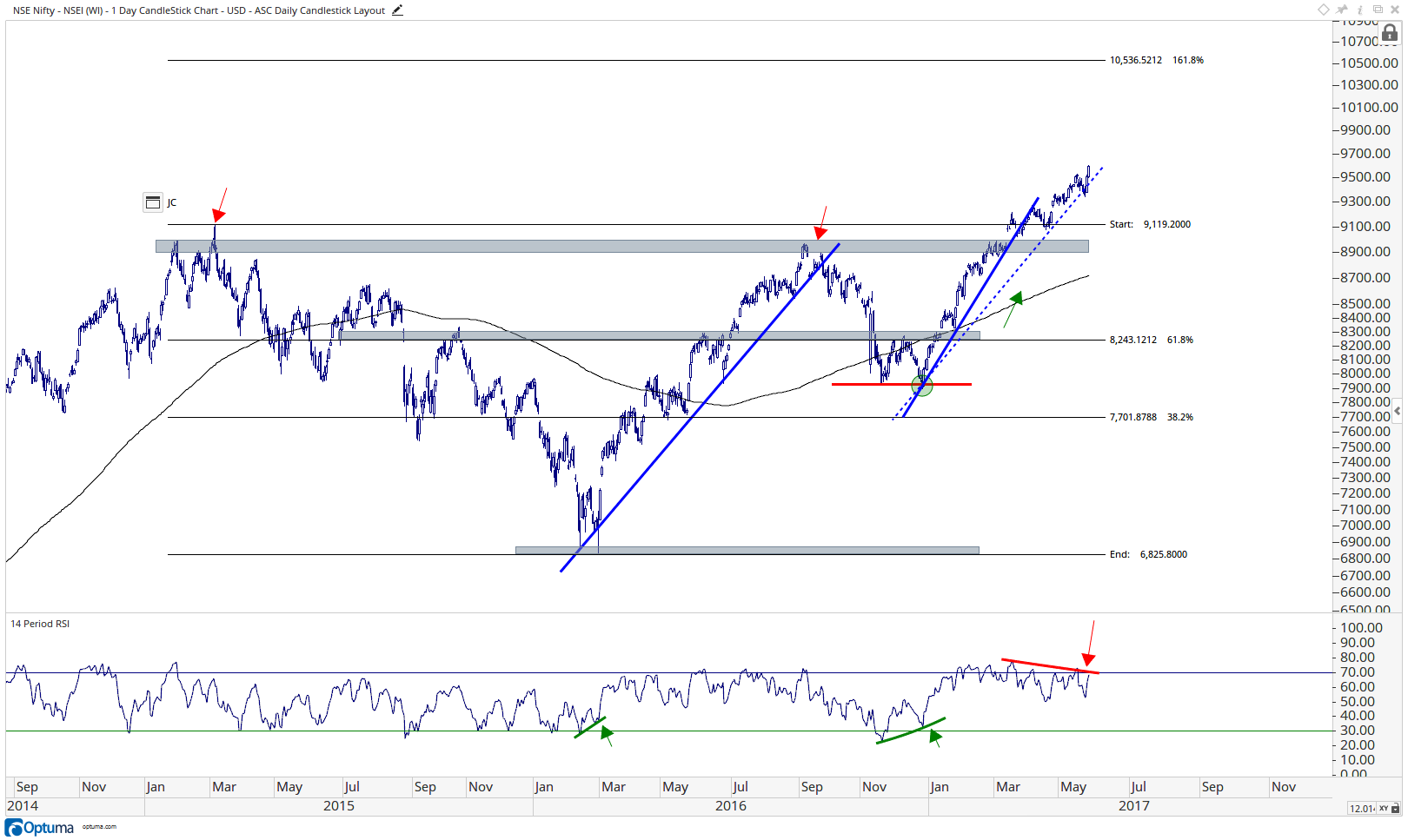 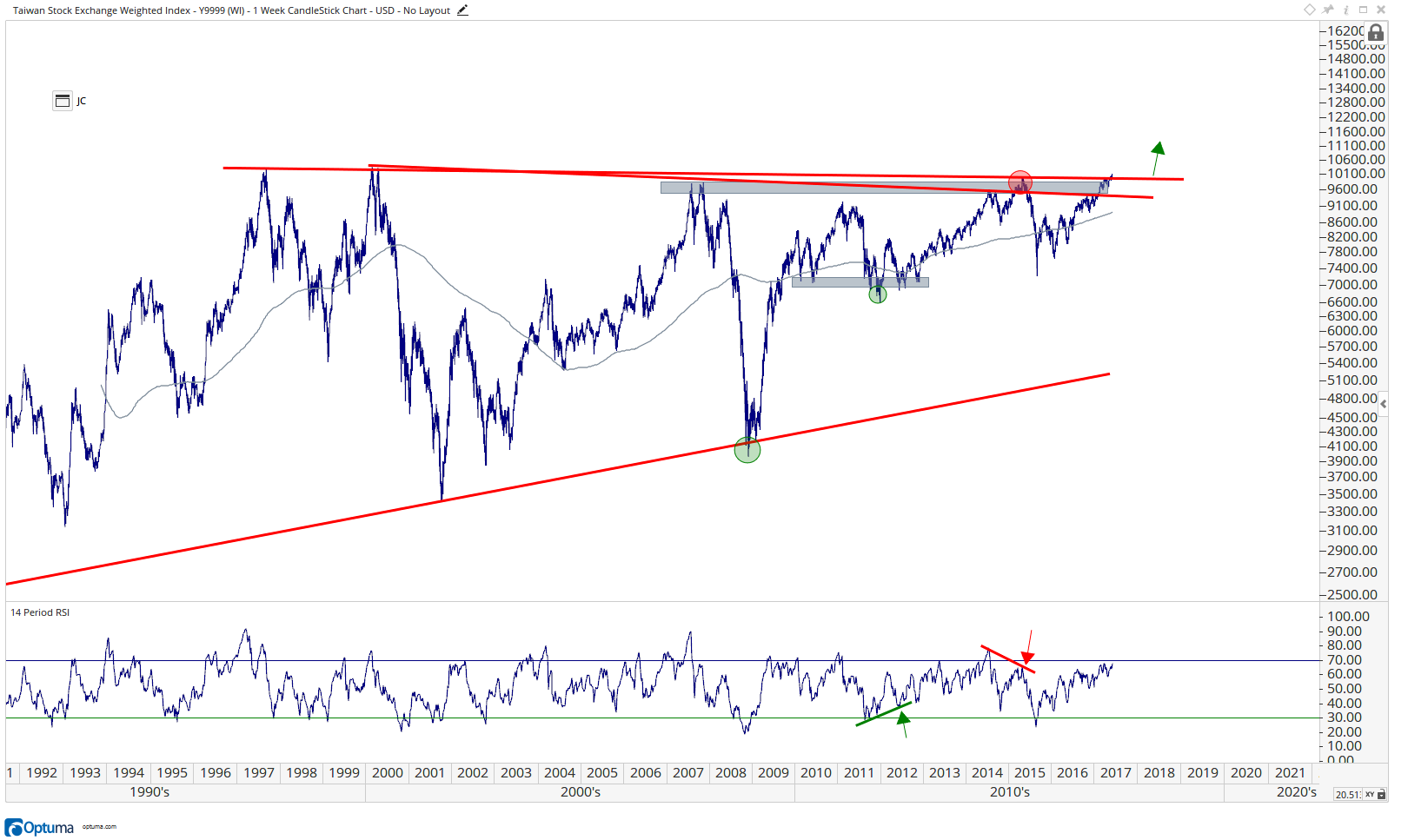 Here is a closer look as Taiwan breaks out above the 2015 highs. If we’re above those former resistance levels, we need to err on the bullish side. There is no question: 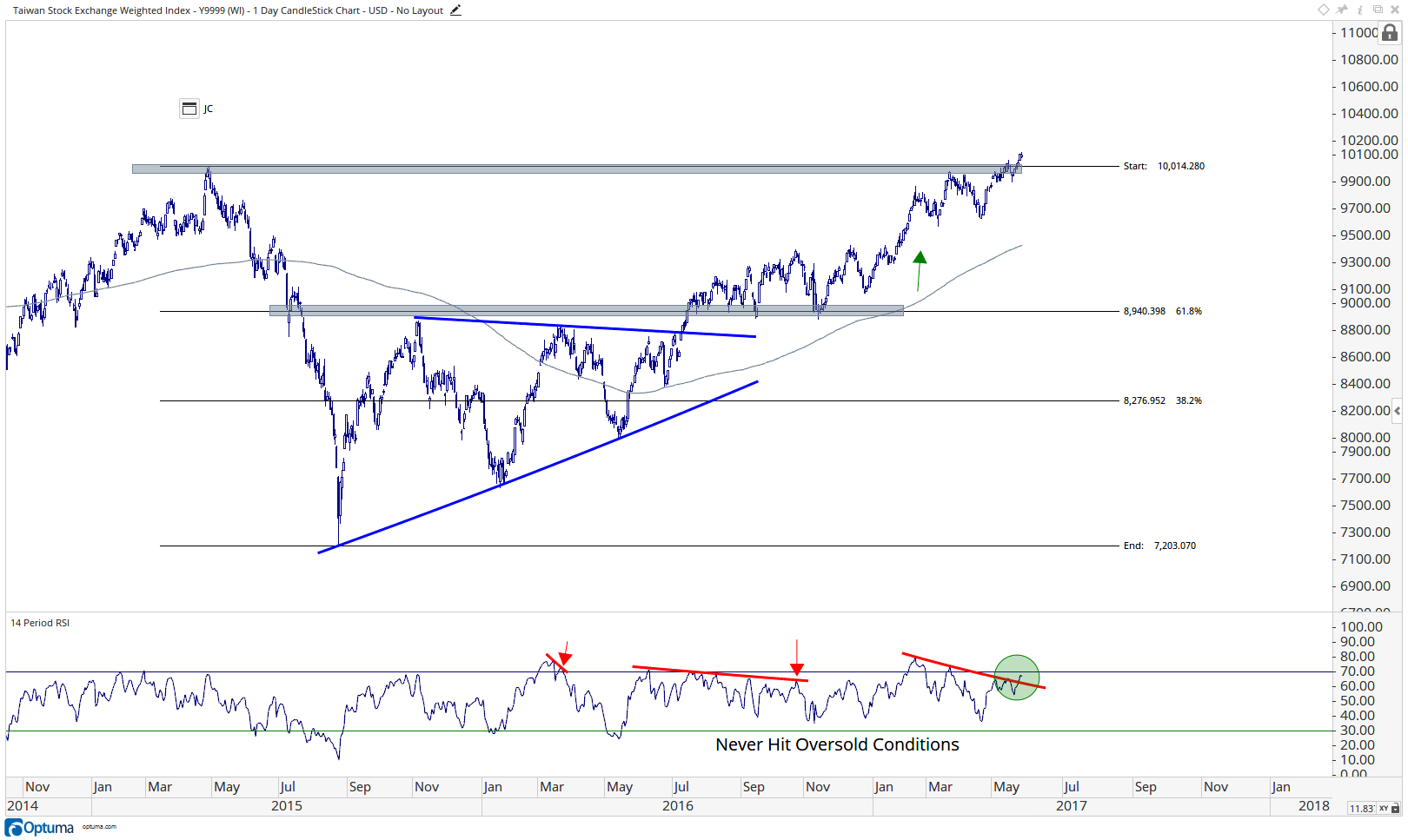 Even with that sell-off last week in Brazil, the uptrend is still intact. Notice how momentum didn’t even reach oversold conditions on that correction. I think we head higher and retest those 2008 highs in the Bovespa. That would put us around 73000-74000 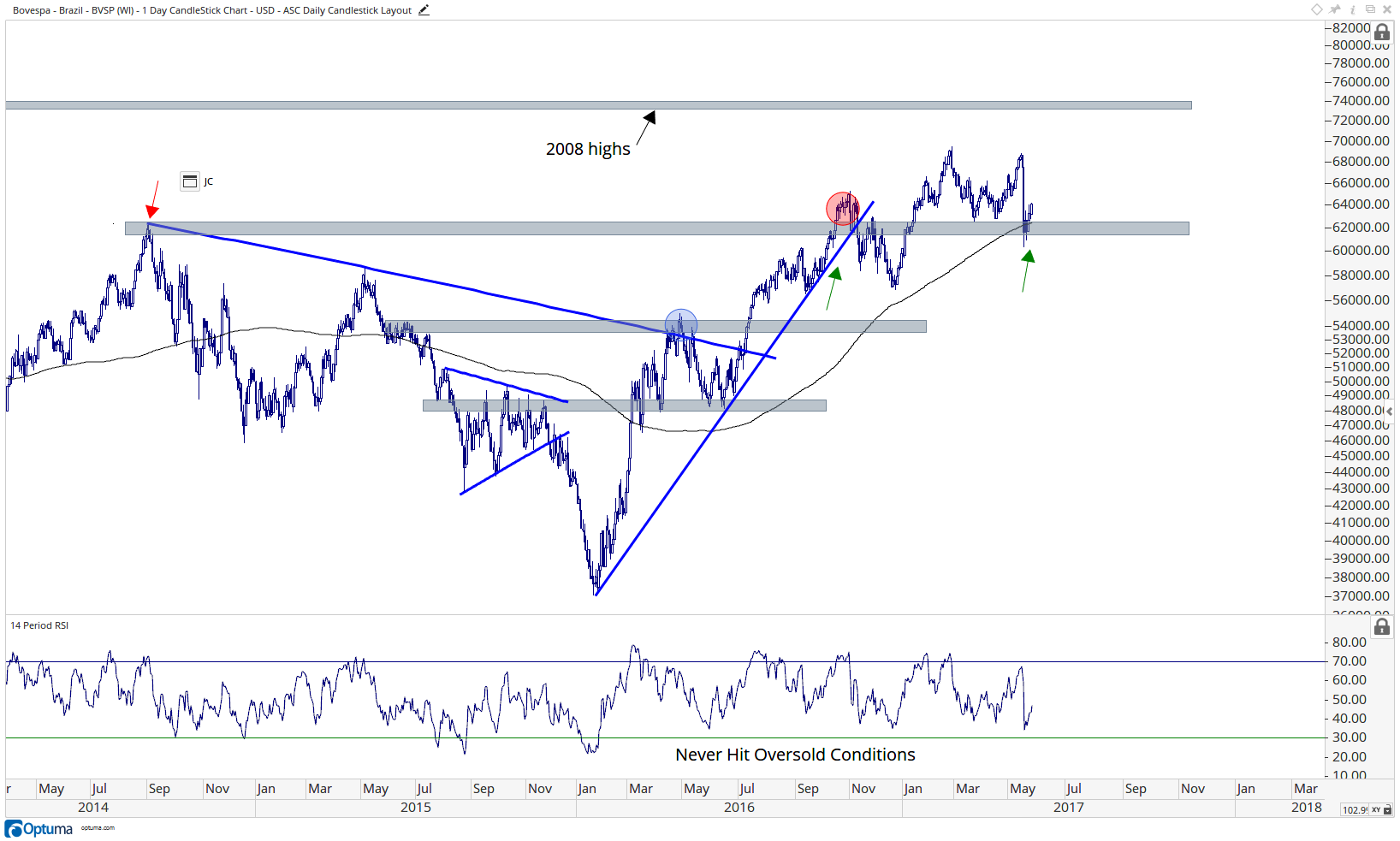 Here is Turkey breaking out of a 4-year base to new all-time highs. The target in Istanbul is still 114,800. That’s where I think we’re going. 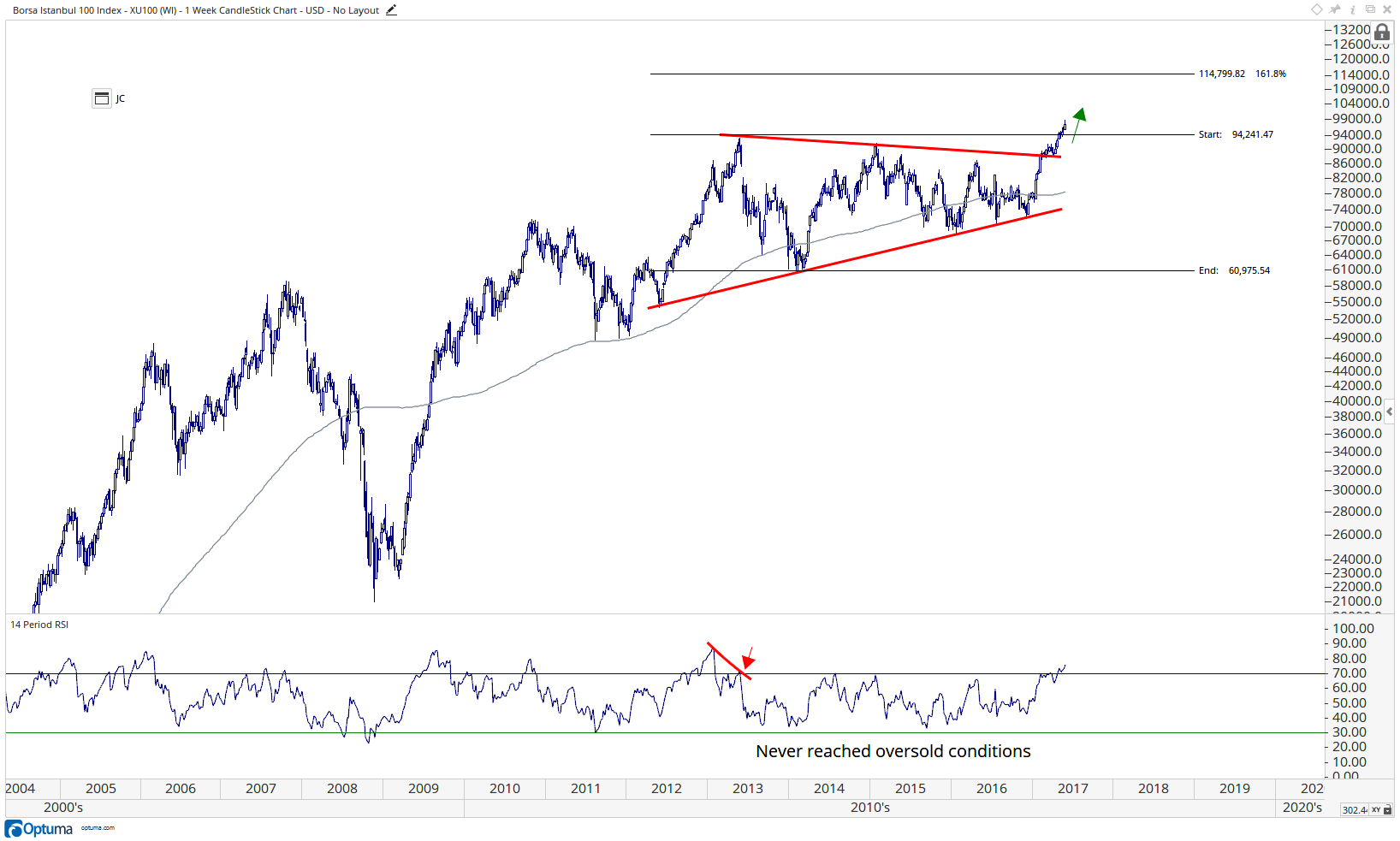 Here is the Global Dow continuing to hold the break out from the consolidation since 2007. Remember this index represents approximately 42% USA, 10% Japan, 8% Great Britain, 5% Germany, 5% Swiss, 3% China. 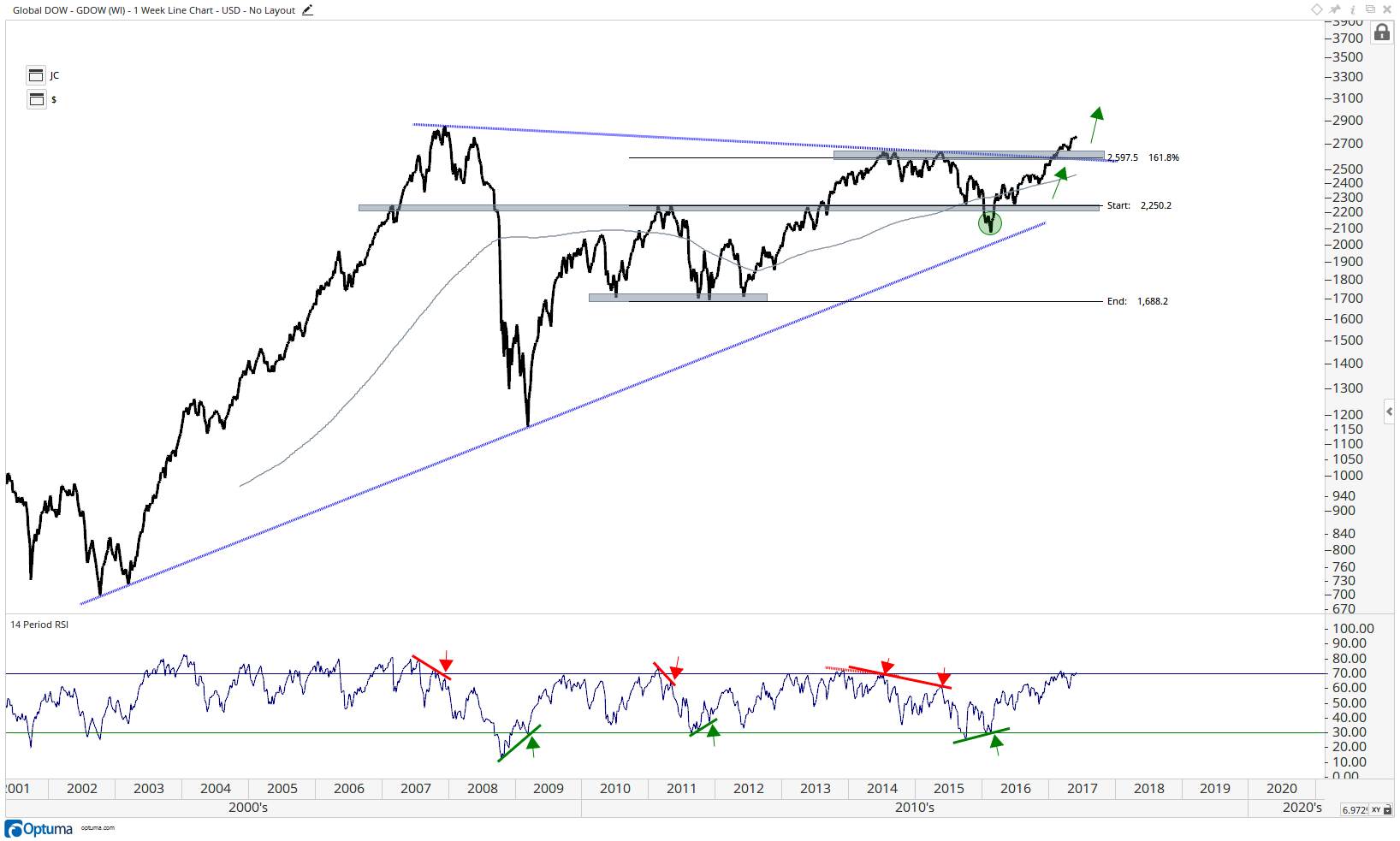 Meanwhile, my own proprietary global Index that I call $GLOBE is an equally-weighted look at the top 10 exchanges in the world including both developed and emerging markets (S&P500, NIFTY50, Nikkei225, FTSE100, Shanghai Composite, Hang Seng, DAX, TSX, Bovespa and ASX200). I see a breakout to new all-time highs and still holding. If this is the case, it’s awfully difficult to be bearish equities. 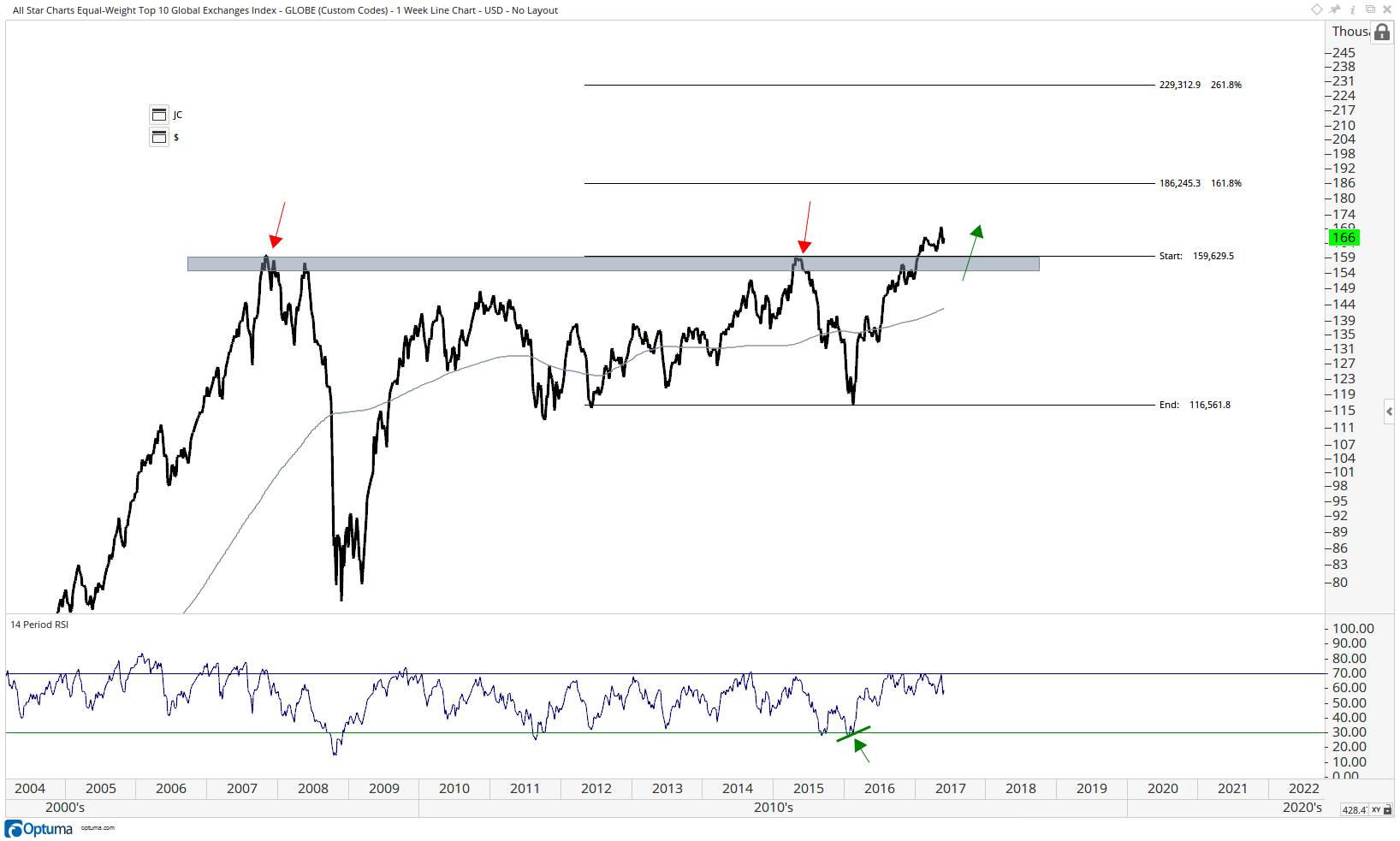 One of my favorite exercises throughout my process is going through all of the international indexes over the weekend. It really helps put things into perspective. Even if you only trade US Markets and are not concerned with India or Australia, it’s part of taking a weight-of-the-evidence approach for equities as an asset class.

The bottom line is there is a lot more good than bad out there. It’s hard to be bearish stocks in this environment. If/when the data suggests to do differently I will be the first to raise my hand and point to the problems. Right now that’s just simply not the case…..

PS – Check out what Premium Members are saying about my research