Earlier this month I asked the question about whether it’s better to own emerging markets or developed markets in a portfolio, and specifically US Stocks to represent developed nations (see here). The conclusion seemed pretty clear at the time, and that is to stick with the US over EM. This was unless, of course, the EEM:SPY ratio could rally back above 0.23 but it wasn’t something we were counting on.

Today I want to take a closer look at just the Emerging Market space as it has been getting a lot of attention lately. We’ll start with the longer-term and work our way down. The first chart is a weekly bar chart going back to before the 2008 crash. During the initial rally off the 2008 bottom, these guys were clearly the leaders. It’s important to note that EM bottomed in the Fall of 2008, while S&Ps didn’t bottom until March of the following year. So it should not have come as a surprise that EM led for 2 years after that bottom: 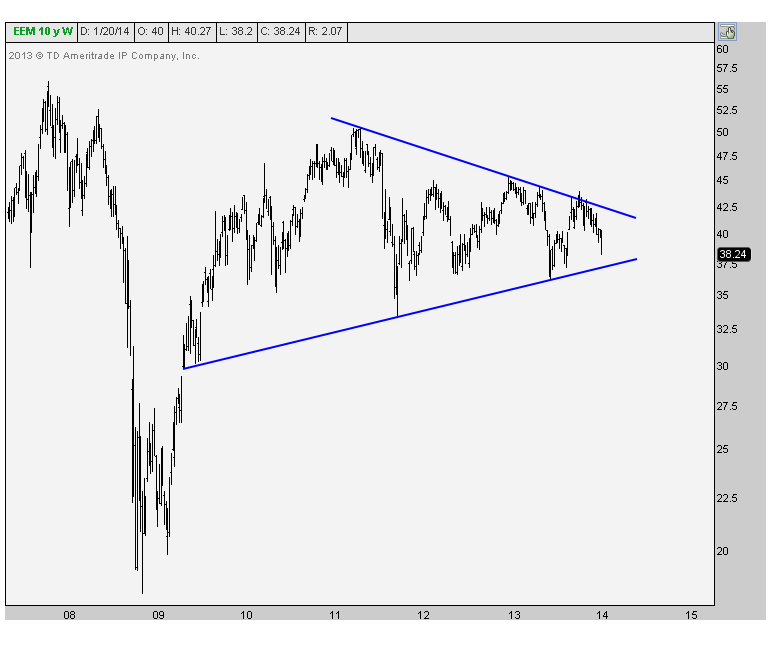 But a funny thing happened after the initial thrust higher. While US stocks continued to rally through 2013, Emerging markets have done the opposite. Notice in the chart above the clear pattern of higher lows, but also with lower highs since the Spring of 2011. Some might call this series of converging trend lines a symmetrical triangle.

If you take a closer look at this symmetrical triangle, you’ll notice a failed breakout above the upper trendline last October, that resulted in this disastrous collapse in price: 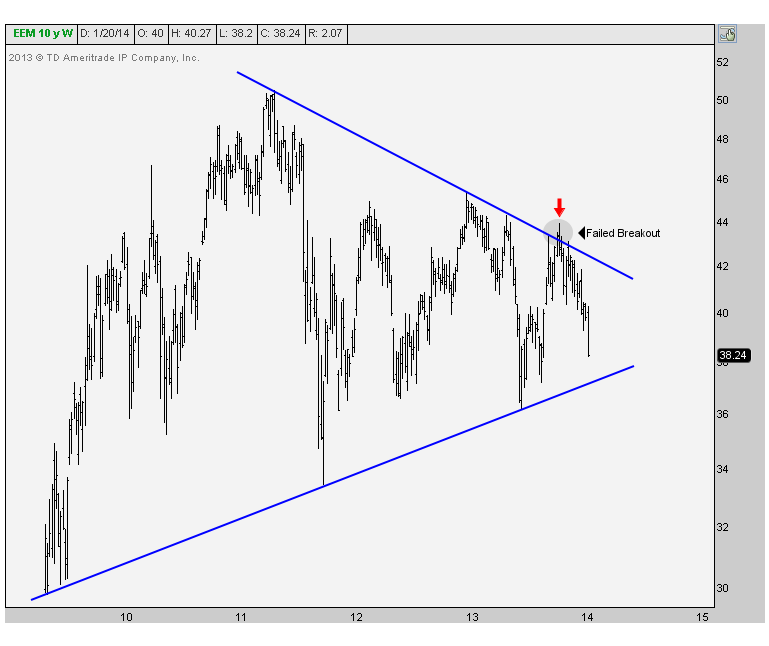 It’s these failed breakout attempts that create the catalyst to send prices tumbling faster and further than many expect. And these guys are currently still in crash mode. $EEM is down a cool 13% since that failed breakout just 3 short months ago. But more importantly, it’s down 8.5% to start 2014.

So how low can prices go? I would say based on that failed breakout, further than we expect. I’m looking at last summers lows as a potential area where buyers might show up. It just so happens that this was also where the buyers showed up in the summer of 2012.

Here is a daily candlestick chart going back a couple years showing support near the 37 level. It’s not the cleanest area of support as we’ve seen overshoots even below that. But the uptrend line from May of 2009 is now coming into play around there as well. 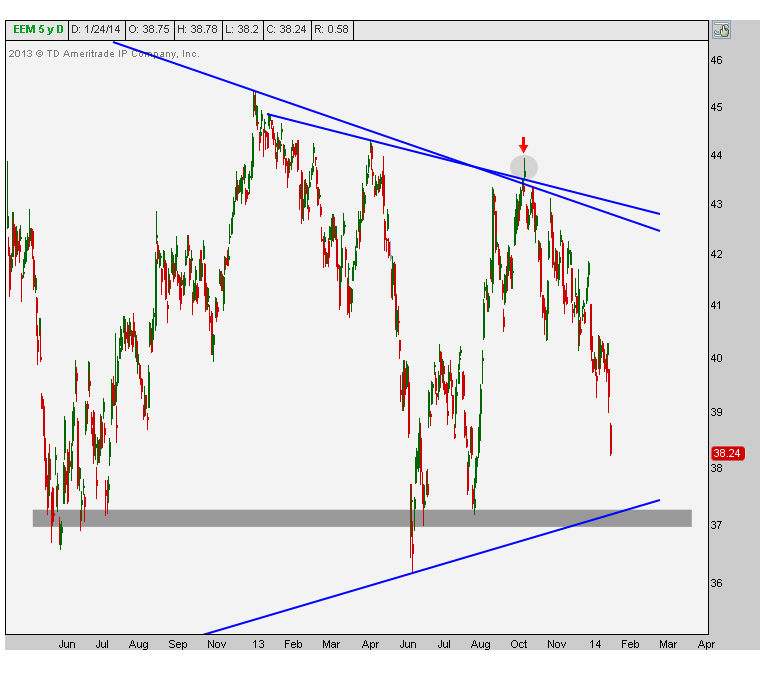 I get the feeling that any bounce around there will only be temporary and eventually we’ll take out all of that support and uptrend line. From my experience, whipsaws that occur with violent follow through in the opposite direction go on to create much bigger problems. This essentially creates a larger force where traditional technical support levels become less reliable.

We are going to see bounces of 5%+ plus and the media and twitteratti will go wild over it. But I think we need to understand that this is just a tradeable bounce – let’s not lose track of our personal time frames, goals and risk parameters. I’m a seller of any strength in EEM, particularly above 40.