This week we held October’s Monthly Conference Call which our Premium Members can access and rewatch here.

In this post, we’ll provide a summary of the call by highlighting 5 of the most important charts/topics we covered along with commentary on each.

First, we have a chart of stocks relative to both gold and bonds. Money always flows where it is treated best, so we always want to be aware of how stocks are performing against their alternatives. 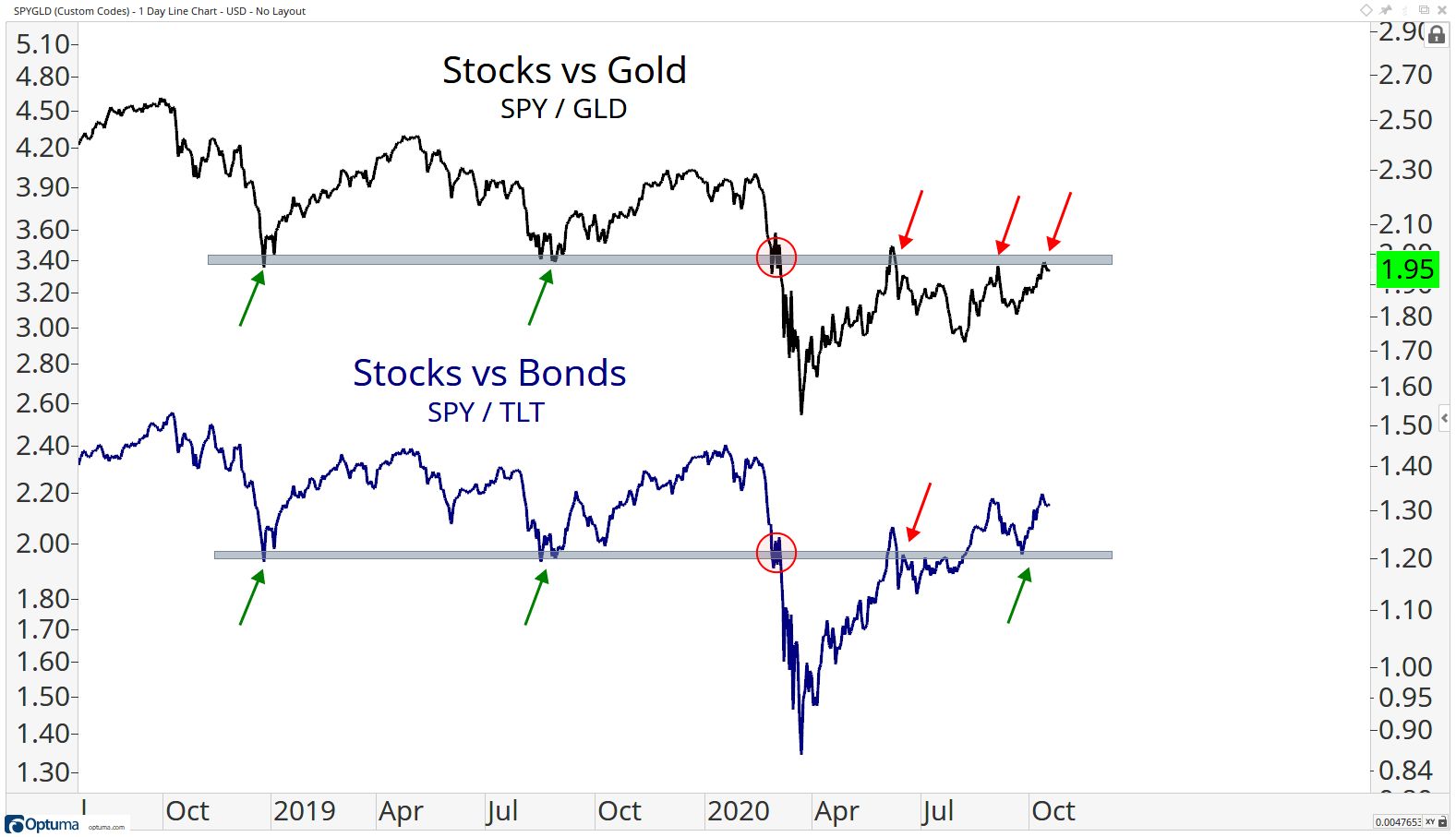 In this case, we have some mixed signals. The S&P just defended resistance turned support relative to bonds and hit its highest level since Q1. The trend is in favor of stocks over bonds for now.

On the other hand, the S&P is still trapped below its June highs relative to gold and has some more work to do. Bulls want to see this ratio break above those highs. We’ll be watching them closely in the coming weeks/months.

Instead of using the S&P 500, let’s look at how these assets are performing relative to the strongest equity index, the Nasdaq 100.

The Nasdaq relative to Gold (not shown) just tested its all-time highs from 2018 but quickly failed. So we definitely want to favor stocks over bonds. Although, the stocks relative to gold ratios are not sending the same signal as they continue to trend sideways, trapped beneath key resistance.

Considering the risk-on behavior we’re seeing in other areas, we expect stocks to eventually resolve higher vs the shiny metal.

Speaking of risk-on behavior, here is one of the best measures of risk-appetite for US equities, the ratio of Consumer Discretionary vs Staples.

How about those new all-time highs? 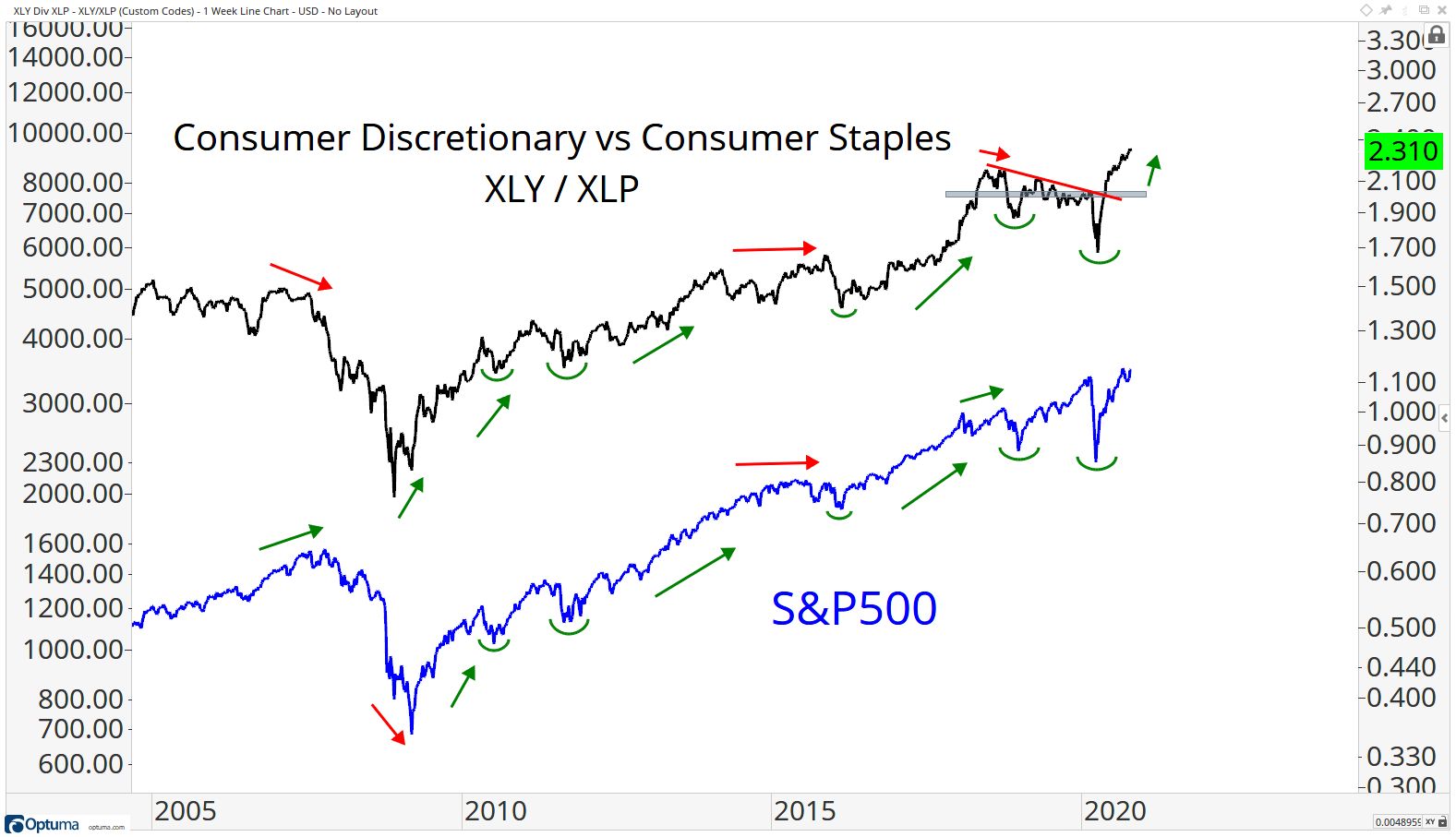 These two charts look almost identical over time. When they diverge, just like they did at the 2009 lows and more recently, before the 2018 and early 2020 selloffs, we want to pay serious attention.

Right now, the ratio is showing a slight positive divergence as it just made another new all-time high despite the S&P 500 stalling out below its September highs.

Long story short, this is just one of many charts right now signaling healthy risk-appetite and suggesting higher stock prices.

Everyone knows about traditional sentiment measures such as the put/call ratio and AAII survey. We can also find sentiment information in unconventional ways, such as through the narratives and messages spread by the media. Just like the other indicators, these are typically most useful when they are at extremes. 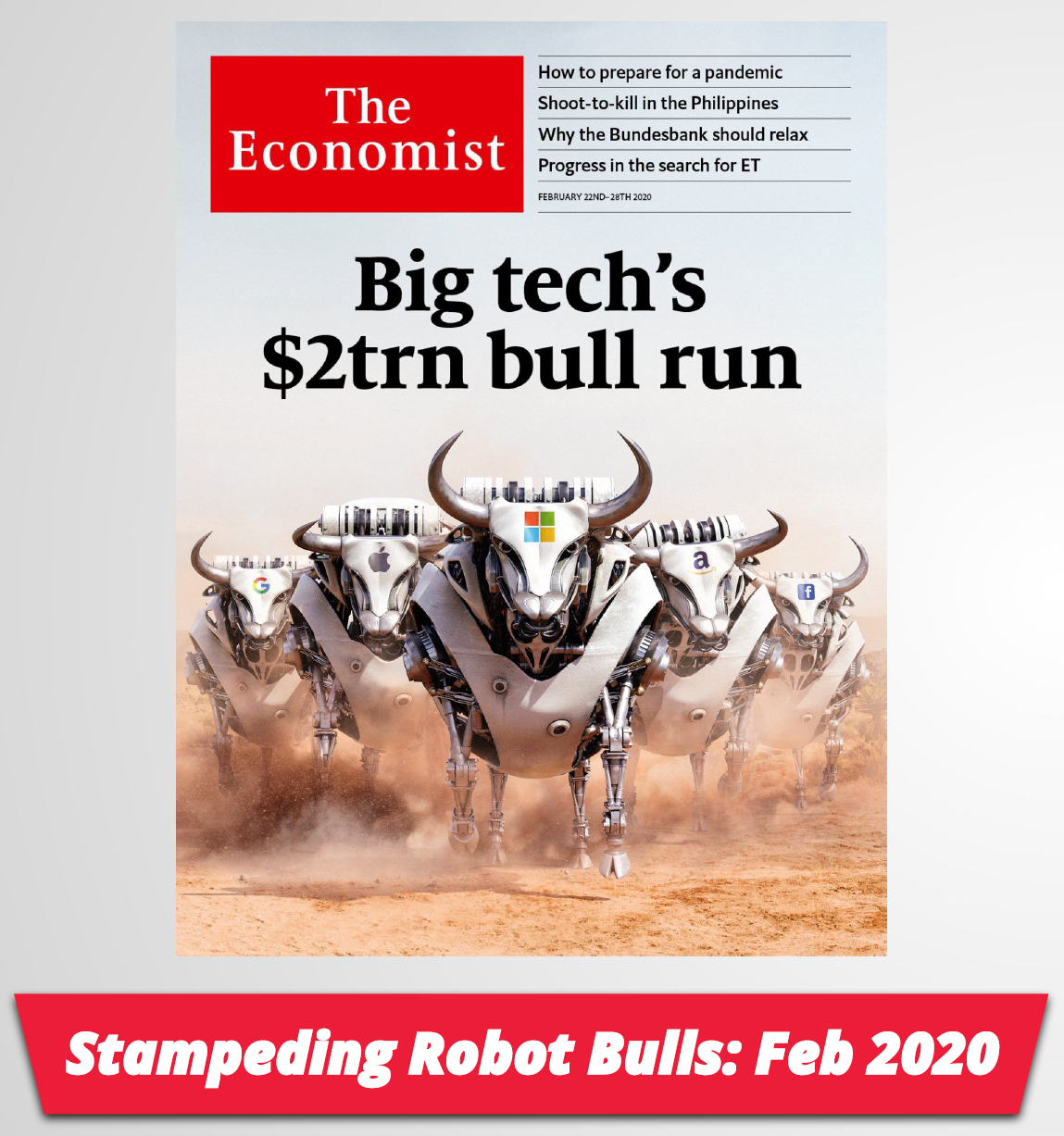 Look at these stampeding Mega-Cap Technology bulls… like actual bulls, on the cover of the Economist back in February. We all know what happened after that.

These magazine covers have actually had a pretty good track record of showing up at key turning points in the market. We can show many more examples of this over the years. 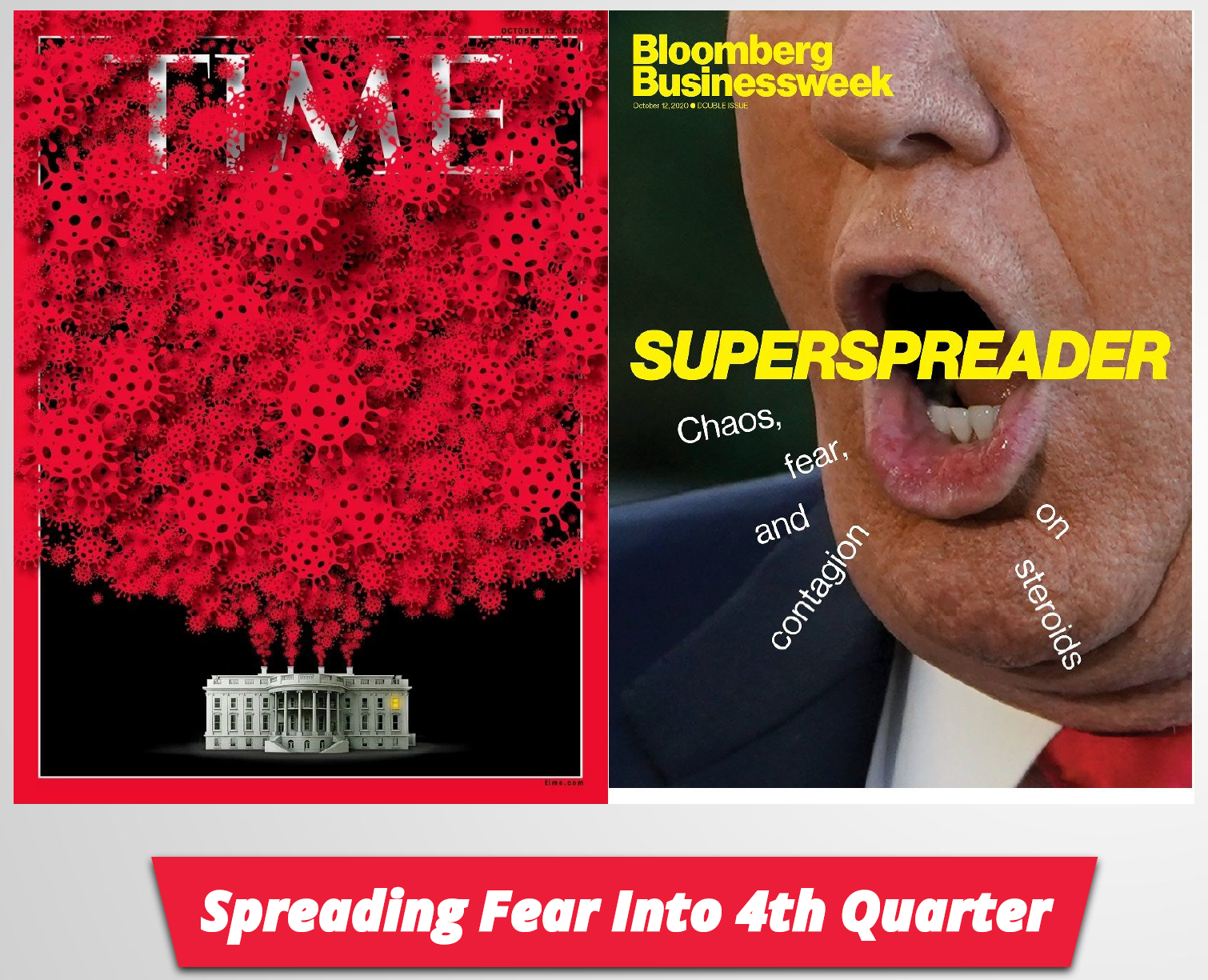 Now let’s contrast the bullish message the media was portraying in February with what we’re seeing today.

Is that enough blood on the Time magazine cover? I can barely see the title. Spooky stuff, right?

How about the recent Bloomberg magazine showing the President basically spitting out words like “chaos,” “fear,” and “contagion.” Does this look like the same euphoric narrative we saw back in February? Not at all.

Similar to other sentiment measures, these covers are reflective of the emotions of market participants. After all, the media is good at feeding people what they want to hear and publishing whatever will get more clicks and eyeballs.

We always want to fade these kinds of extreme sentiment indicators. When the media is saying one thing and market is telling us the opposite, I’d say we’re better off siding with the message of the market, just like we did in February when we turned bearish.

There is a popular aphorism on Wall Street that says “the best bull markets climb a wall of worry.” I’d say that’s exactly what we’ve seen and continue to see as stocks have rallied aggressively off their lows this year.

4. Internals Improving Across The Board

We spent a lot of time discussing market breadth in this month’s conference call. One recent development worth mentioning (though not shown below), is that just about every major average’s Advance/Decline line made new all-time highs this month. That’s definitely not bearish.

Although, most of our charts were pointing out breadth thrusts in both new highs as well as momentum readings (not shown) for just about all the major indexes.

The chart below shows the Mid-Cap S&P 400 hitting its highest readings in short-term new highs in over a decade.

Looking back through history, these extremes have often occurred at the beginning of new cyclical bull markets. In these scenarios, it’s wise to take most bearish divergences with a grain of salt for at least a few years.

Not only did we see historically high breadth readings in SMIDs, but we are now seeing an expansion in new highs over the shorter-term as well.

Considering the indexes have moved more or less sideways since June, we have to view this increasing participation as a positive. 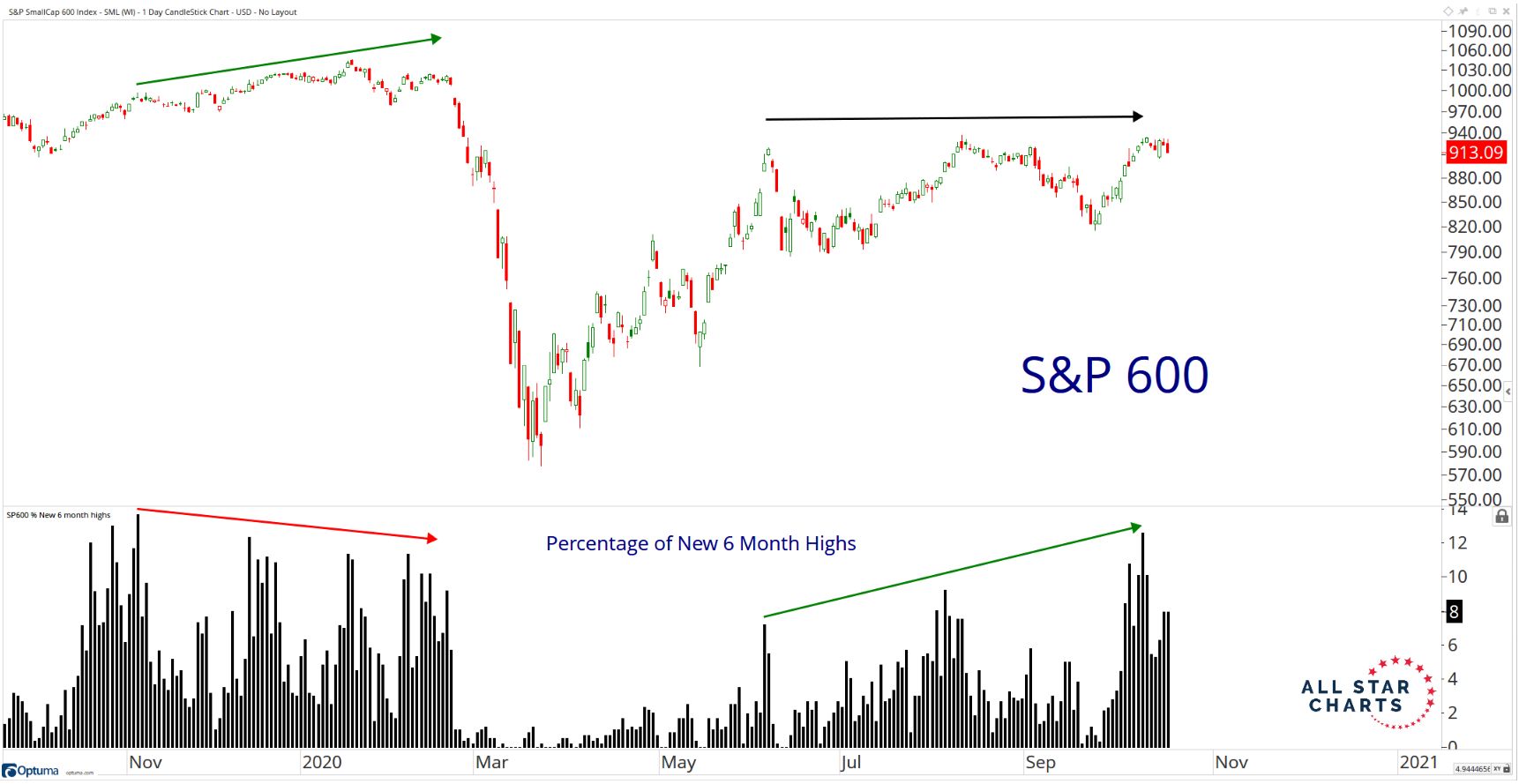 We are also seeing a similar bullish breadth divergence in new highs for Financials, which are Small and Mid-Caps 2nd and 3rd largest sector weightings.

Bottom line: we continue to see positive developments in market internals which are supportive of higher prices for these areas.

5. An Intermarket Take On Rates

Here is a chart showing one of our favorite Intermarket ratios that we use as an indicator for yields. As you can see below, the Copper/Gold ratio and US 10-Year Yield have a positive long-term correlation. 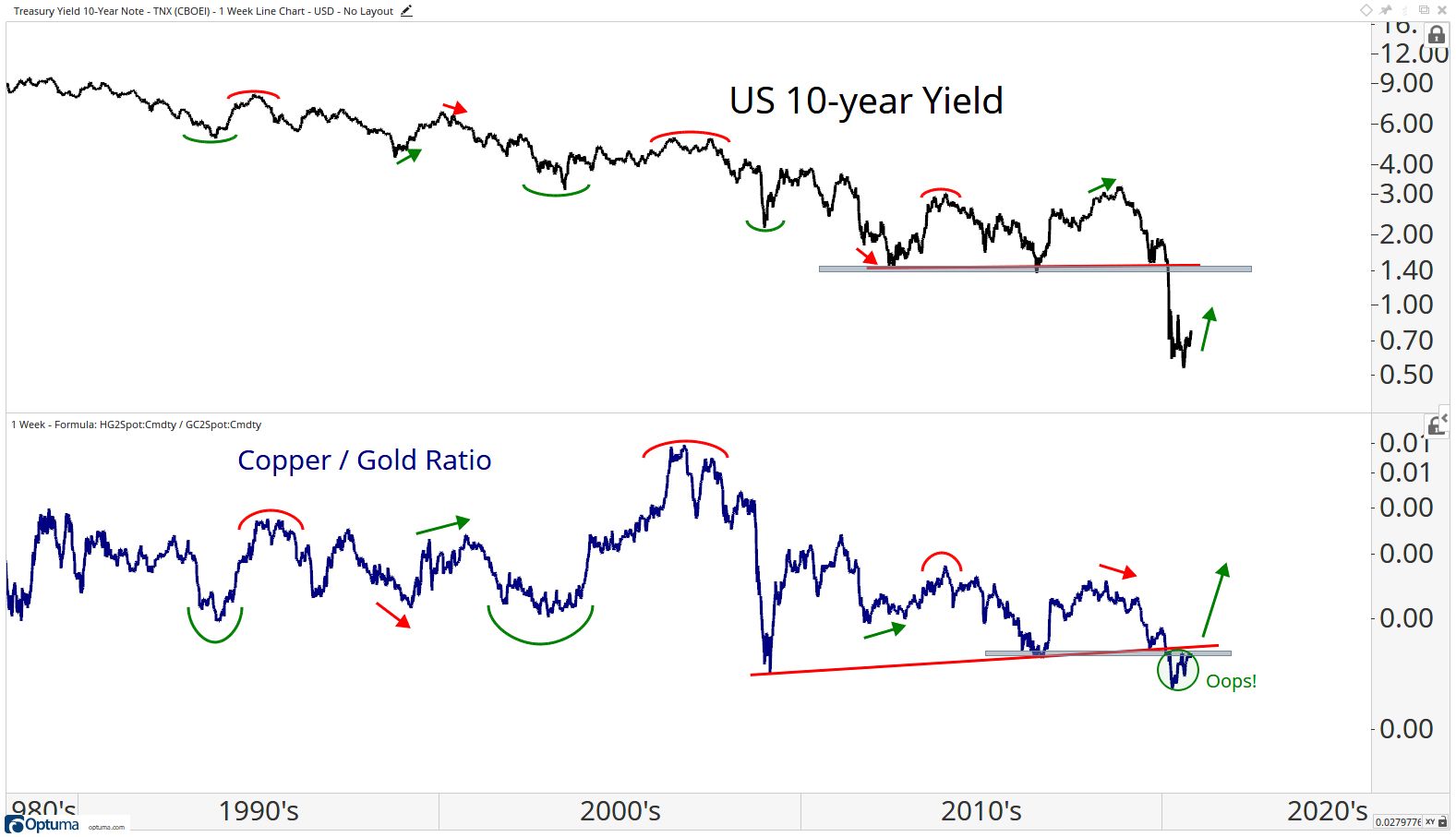 In recent days, this ratio has rallied to its highest level since February, and has just about confirmed the potential failed breakdown shown in the chart.

This is just one of several intermarket inputs indicating a move higher in yields… and we’re already seeing this begin to play out as the 5, 10, and 30-Year all rallied to their highest level in more than 4 months this week.

While signals are still a bit mixed, the weight of the evidence is shifting further in the direction of higher rates.