On Tuesday night we held our October Monthly Conference Call, which Premium Members can access and re-watch here.

Offensive areas of the market have been showing impressive strength over the past several weeks as defensive assets continue to trend lower. The recent developments suggest that we’re re-entering an environment that rewards risk-seeking behavior.

Here are our custom risk-on and risk-off indexes as well as a ratio of the two:

Whether looking at these indexes, our risk checklist, or the assets on an individual basis, it’s clear animal spirits are waking back up.

Crude oil, rates, AUD/JPY, and cyclical stocks are all making new highs. Even bitcoin and copper are joining the party this week. We’re also seeing confirmation from some of our favorite intermarket ratios such as discretionary versus staples, stocks versus bonds, and copper versus gold — new highs across the board as the bulls continue to score more points.

We think other risk assets will soon follow. As for defensive assets, bonds, the yen, and gold continue to make new absolute and/or relative lows. Investors are simply not positioning for further headwinds right now. They’re buying the highest-risk assets and preparing for good times ahead. Whether it’s frontier markets among global equities, high-yield bonds in fixed-income markets, or cyclical stocks in the US, they’re going as far out on the risk spectrum as possible. We want to be doing the same.

Speaking of risk assets, here are two major areas that are currently battling it out at their 2018 highs, which is when risk peaked around the globe during the last cycle. This is Emerging Markets $EEM and Regional Banks $KRE: 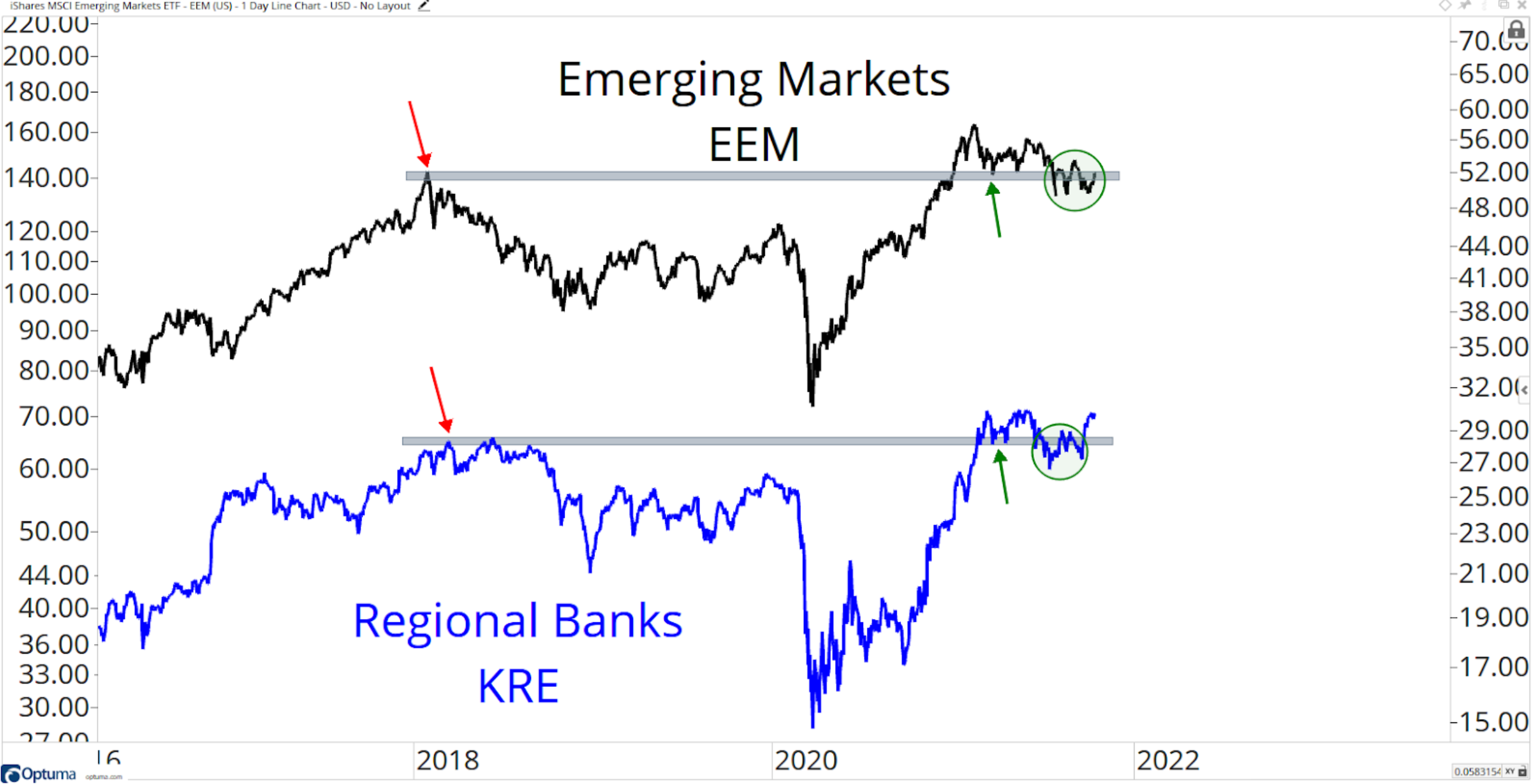 With Financials blasting back to all-time highs this week, Regional Banks are more than participating as they reclaimed those key highs we’ve been watching. And considering all the other risk-on developments we’ve been seeing, why shouldn’t we expect Emerging Markets to do the same? EEM just closed back above its 2018 highs around 52 this week.

Whether or not the bulls can take control of these critical polarity zones and press higher from here will be a very valuable piece of information. They’re already starting to do it, so based on the weight of the evidence, we think that’s the direction we’re headed.

Bears will point out that we aren’t seeing much from new highs these days. They aren’t wrong. There’s been strong rotation beneath the surface, though, and we don’t think that’s bearish. There’s also no divergence to point to in new high indicators, as the S&P 500 hasn’t made new highs in price.

But there was a divergence in new lows when the large-cap index bottomed out earlier this month. Here’s a look:

For a while this year, we’d been seeing new lows expand each time the index sold off, even though it wasn’t making new lows in price. Well, now we’re looking at the opposite scenario. We finally experienced a lower low in price, but it was NOT accompanied by more stocks making new lows. Instead, fewer stocks made new lows during the latest selloff.

While there remains little to talk about from a breadth standpoint, there definitely isn’t anything bearish to say.

Not only are we seeing bullish developments in price lately, but the sentiment backdrop has significantly improved as well, as we finally experienced the unwind we’ve been waiting for. Here’s a look at the Investors Intelligence Bull-Bear Spread: 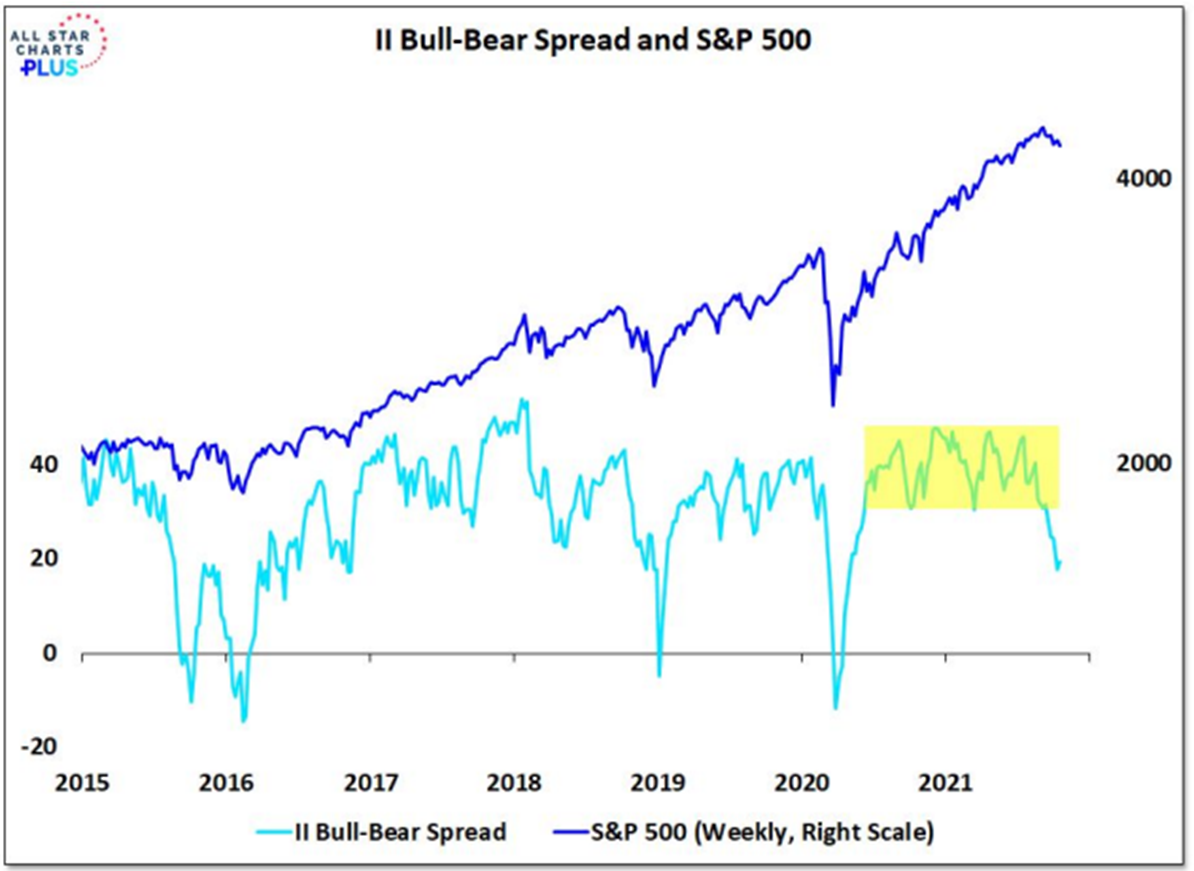 The indicator is at its lowest level since the Covid selloff last year. Despite a very shallow pullback in price at the index level, investors have finally reset their expectations, as we’ve seen a steady increase in bears since last month. It’s hard for markets to make new highs if everyone is bullish. If we didn’t have bears, who’d be the incremental buyers? Well, we have the most now since Q1 of 2020.

We’re also seeing evidence of a significant unwind in sentiment in our other indicators. The bottom line is that for the first time in a year and a half sentiment is in a position where it should act as a tailwind instead of a headwind for higher stock prices.

5. Not All Commodities Are Created Equal

If you want to know what’s happening with commodities markets, look no further than the quad-pane chart below:

Agriculture, Base Metals, and Energy are all in strong uptrends. Meanwhile, Precious Metals have been in a downtrend for more than 12 months now.

Base Metals have been incredibly strong, even as Copper chopped sideways the past five months or so.

Energy has been particularly hot in recent months and has dragged the CRB Index with it. And it’s not just futures. It’s energy stocks in the US, energy stocks outside the US, energy-centric currencies, etc. Energy-sensitive assets are simply being bid up across the board. This is very supportive of higher prices for crude oil, the energy complex, and commodities more broadly.

Another takeaway from this chart has as much to do with the strength we’re seeing from risk-on commodities as it does with the weakness from risk-off ones. Notice how everything is moving higher except for precious metals?

The fact that investors continue to turn to the riskiest areas in each asset class while defensive assets just keep making new lows is another sign that animal spirits are coming back to life.

As always, Premium Members can re-watch the Conference Call and view the slides here.

We hope you enjoyed our recap of this month’s call.

Thanks for reading, and please reach out to us with any questions.