You might think that the Nasdaq has been lagging some of the other major US equity averages lately. And after a quick glance at the Nasdaq100 ($QQQ), it’s a fair point. But remember that this disaster of an Apple stock is close to 20% of that index. Apple lost almost 30% of its value in just 3 months. I guess the 100B in cash and “low” p/e ratio wasn’t so important after all.

Now, looking at the Nasdaq100 in a different way, it actually turns out that they’ve been the leader. While the Dow Jones Industrial Average, S&P500, Russell2000, and Midcap400 are still below their September highs, the Nasdaq100 Equal Weight ETF ($QQEW) is already challenging those highs.

So basically, if you take $AAPL’s monster weighting out of the equation, the Nasdaq100 looks great: 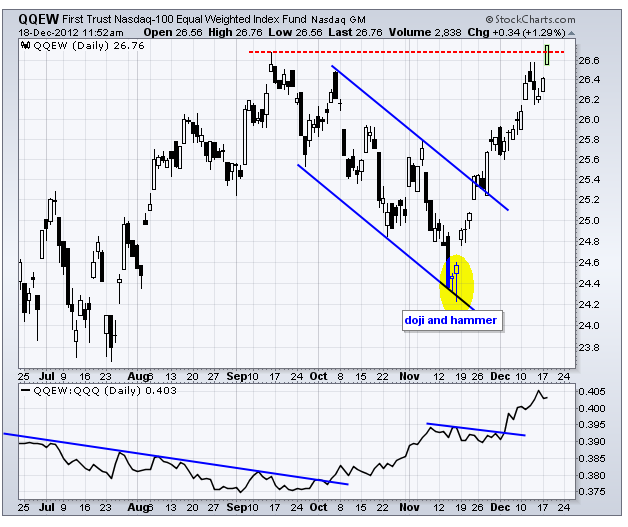 Look at the lower window in the chart. How about that outperformance in the Equal Weight Nasdaq100 since the $AAPL destruction began?

We can have a long philosophical discussion about price and cap weighted averages. I have my feelings on that, like $IBM being the most important stock in the Dow Jones Industrial Average while Alcoa is almost irrelevant. But that’s a topic for another blog post.