It’s amazing how many people in this world completely ignore monthly charts. I never understood it. It’s an exercise that only needs to be done once a month. It’s not like eating healthy or working out that you have to do it consistently for it to work. This is 30 minutes per month! 30 minutes! 12 times a year. That’s 6 hours of work that will be the most important and productive 6 hours of the entire year. Even if you have a short-term time horizon, all of these shorter-term trends come within the context of a much larger structural picture.

We’re now in February so, of course, we want to talk about what happened in January. I’ll have my friend Jeff Hirsch from Stock Traders Almanac on the podcast this week talking about the seasonal data that is so critical this time of year. But as far as price itself is concerned, we want to rip through all of the monthly charts like we do at the end of every month. I find it really helpful to not just look through the major U.S. and Global Indexes, but also individual sectors, stocks, commodities, currencies and intermarket relationships. We don’t have to look through all 6,000-7000 charts in our universe on monthly timeframes, but I do think a select group of charts should be reviewed consistently.

Here is my list. It’s not perfect, but I think it represents enough information for me to have a good understanding of the most important longer-term trends around the world. This list is a work in progress and I’ve always added to it, so I see no reason why I shouldn’t continue to add to it over time. I have also included this workbook of charts to my Chartbook, which is available to members of Allstarcharts Premium. If you’re not already a member, you can start a risk free trial here to see access the entire Chartbook. 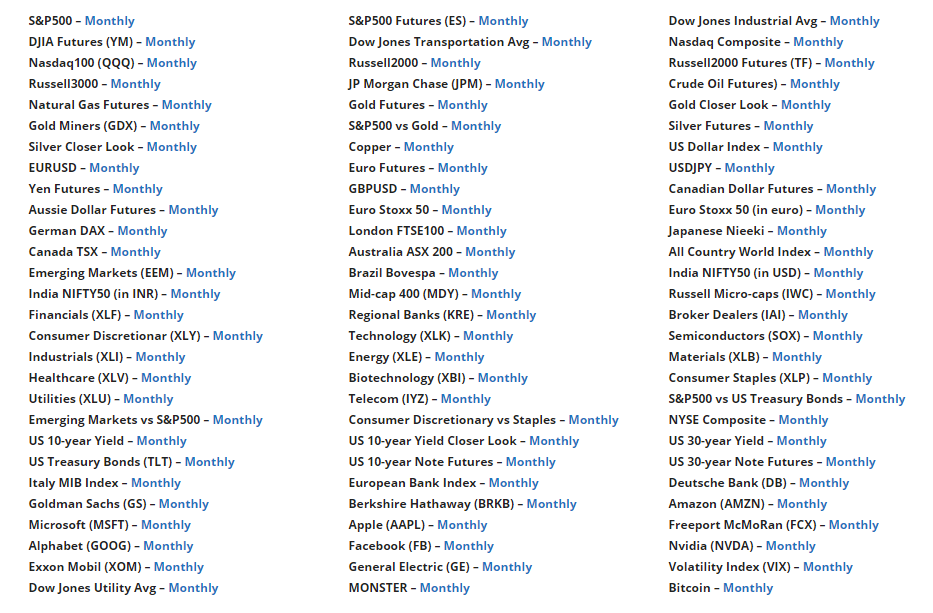 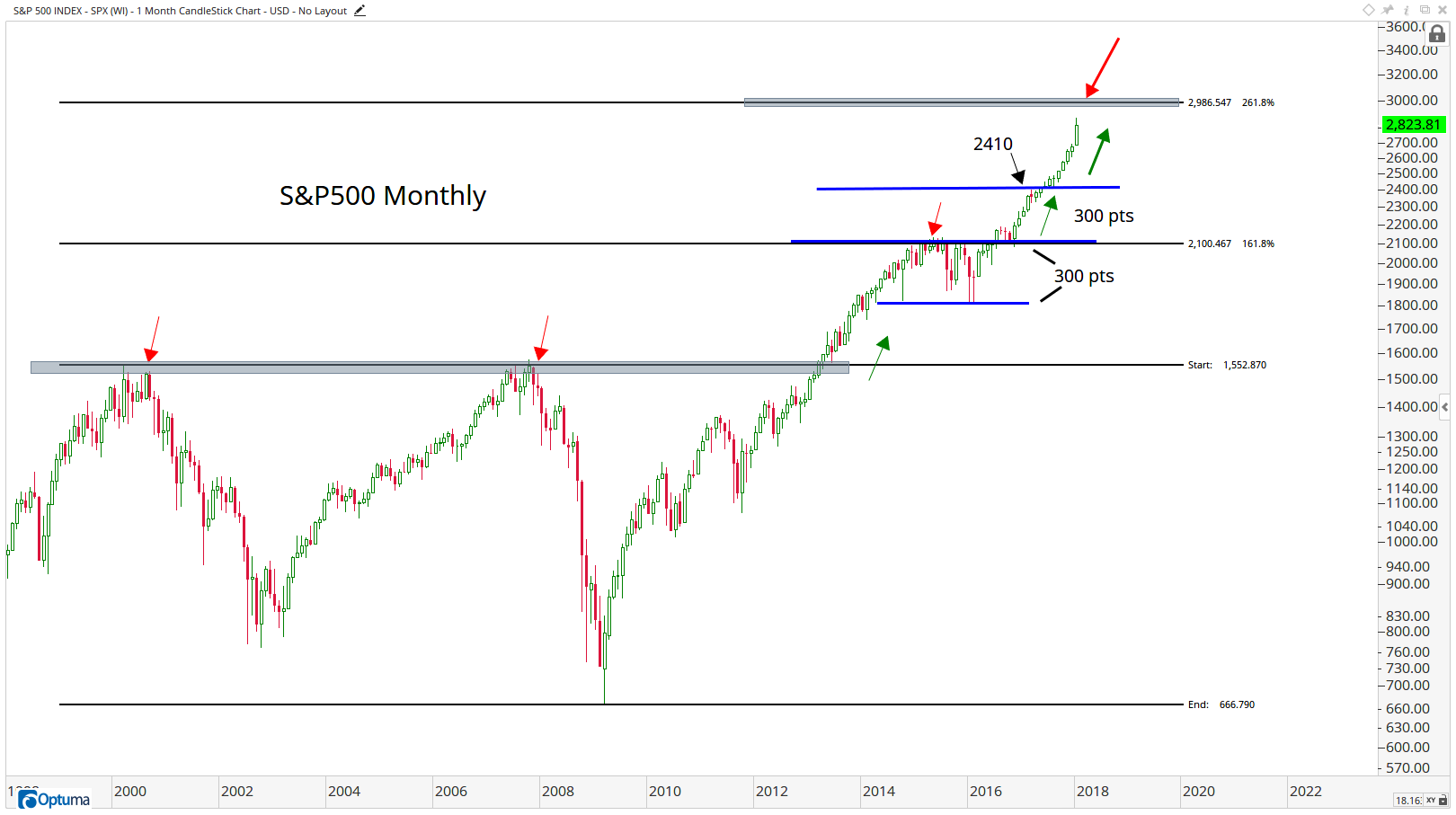 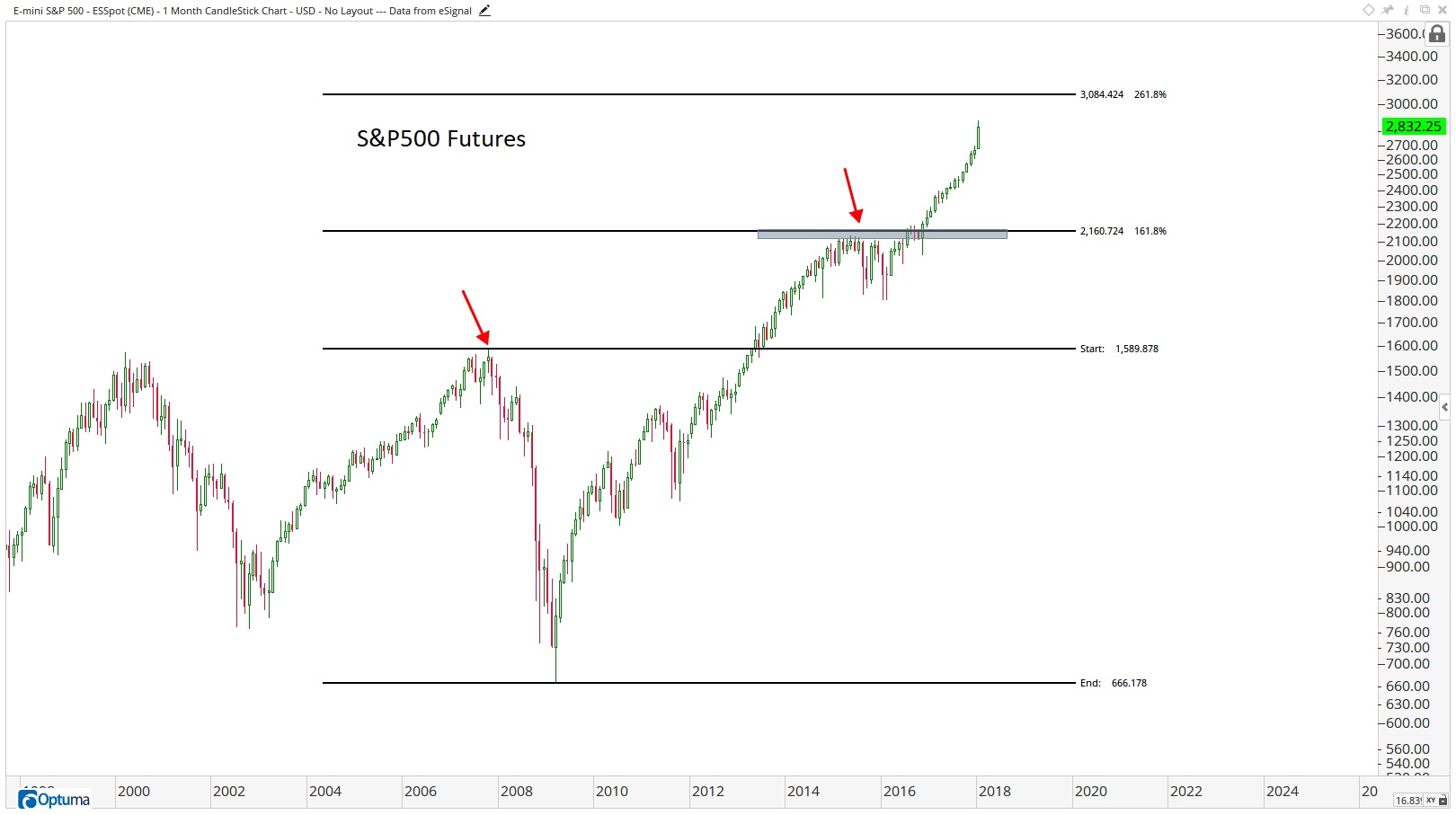 Look at the Nasdaq Composite and Nasdaq1000 which still look like they have more upside coming as well, 8000 and 181.50 respectively: 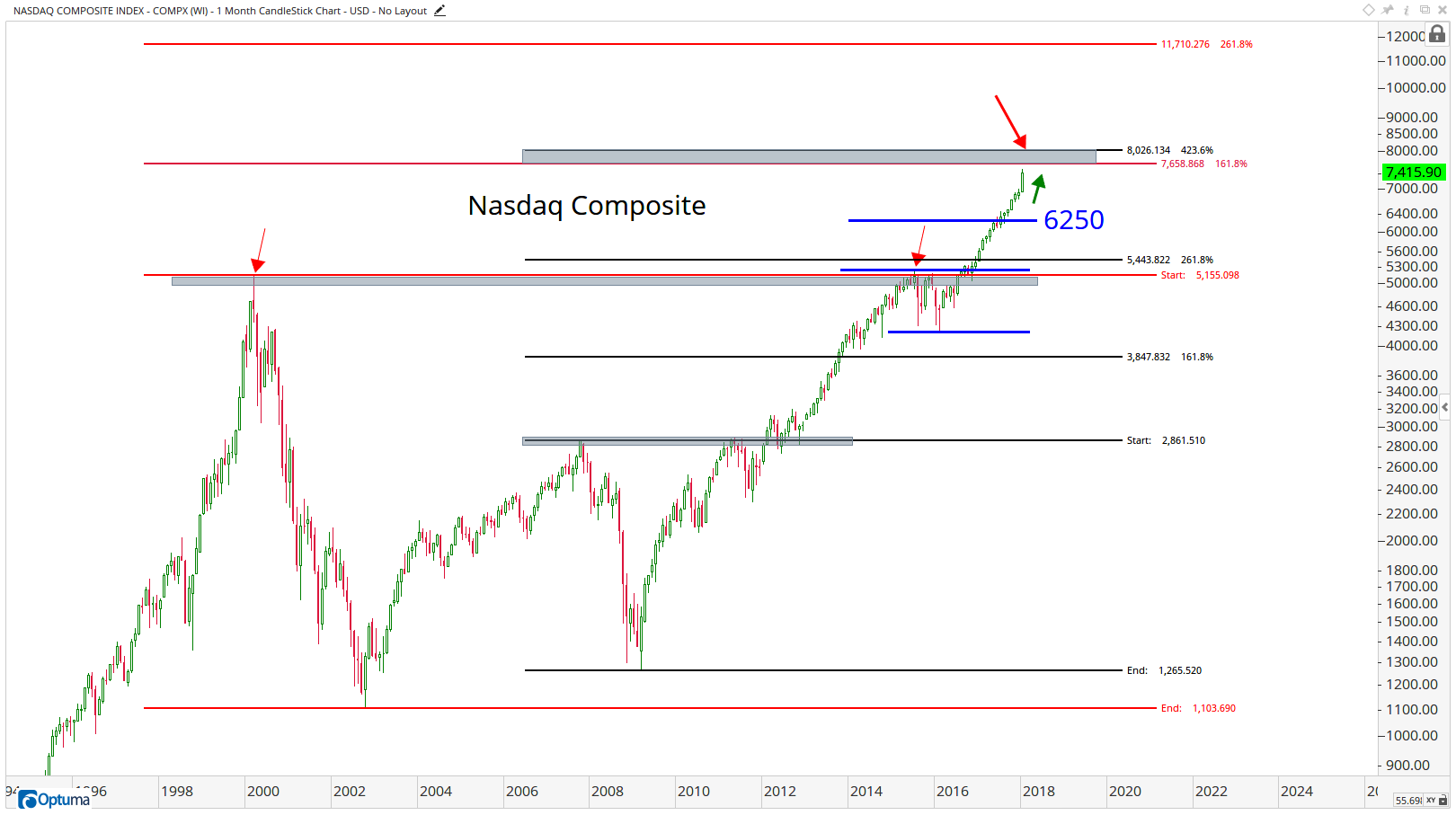 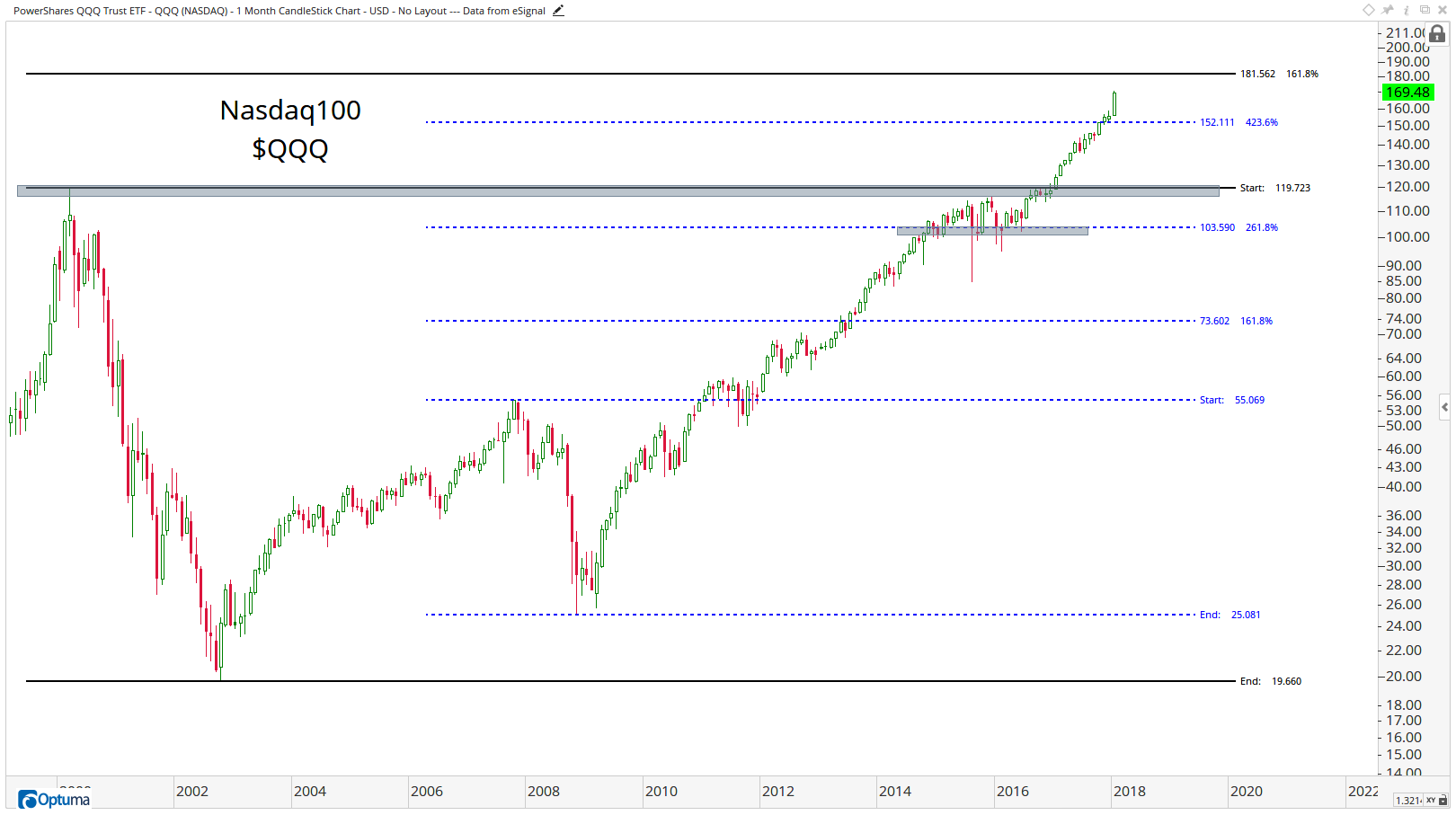 Our target near 1688 in Russell2000 is still higher than current levels: 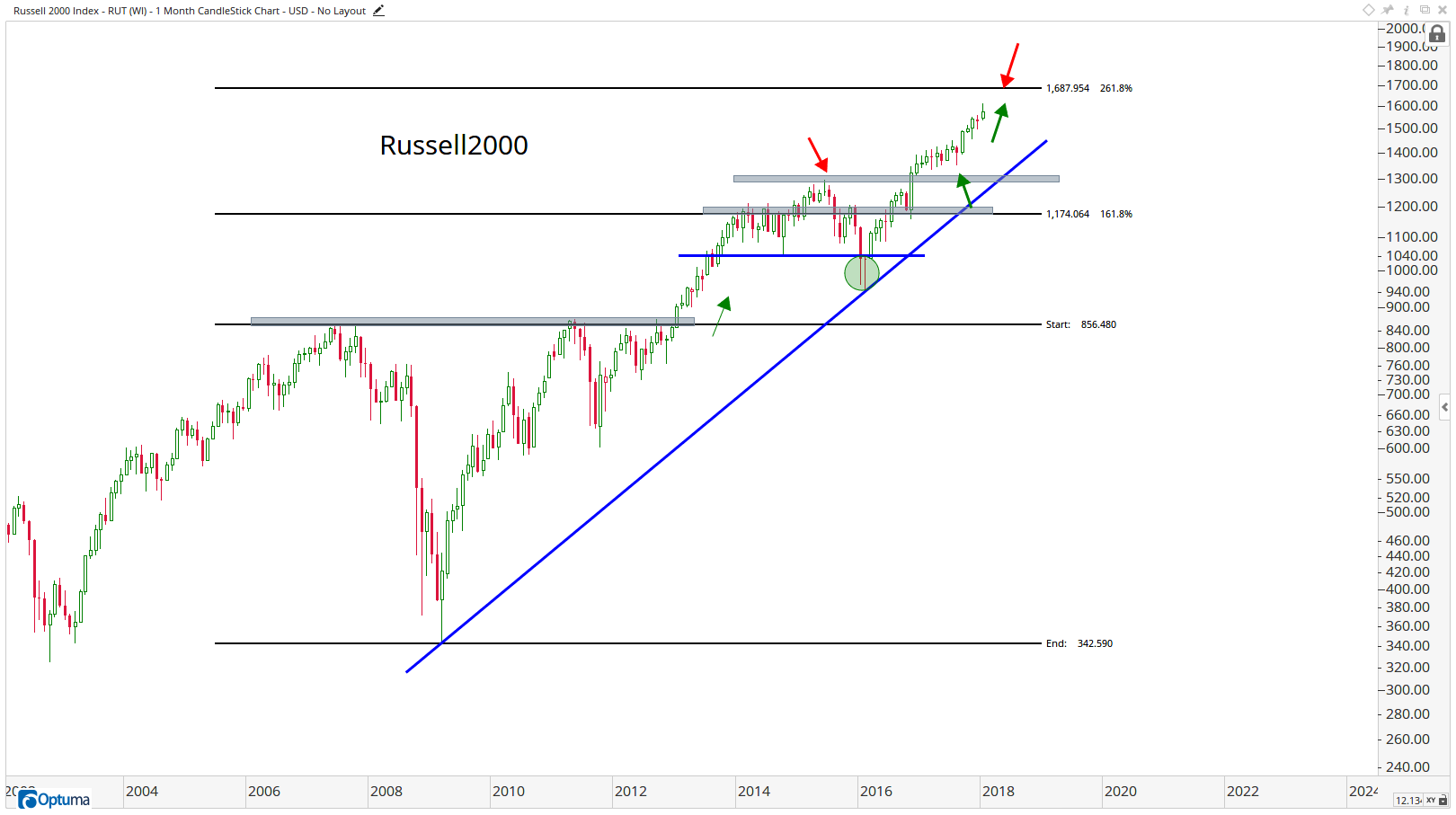 And the Russell2000 futures suggest a lot more upside is left, which I find interesting. If we’re above 1550 in Russell2000 Futures, I think we need to err on the obnoxiously bullish side of stocks. Now, if we’re below 1500 then I would argue that is evidence of severe deterioration. So I think this particular market is a good gauge of not just strength, but from a risk management perspective can be a lot of help in evaluating the overall market. 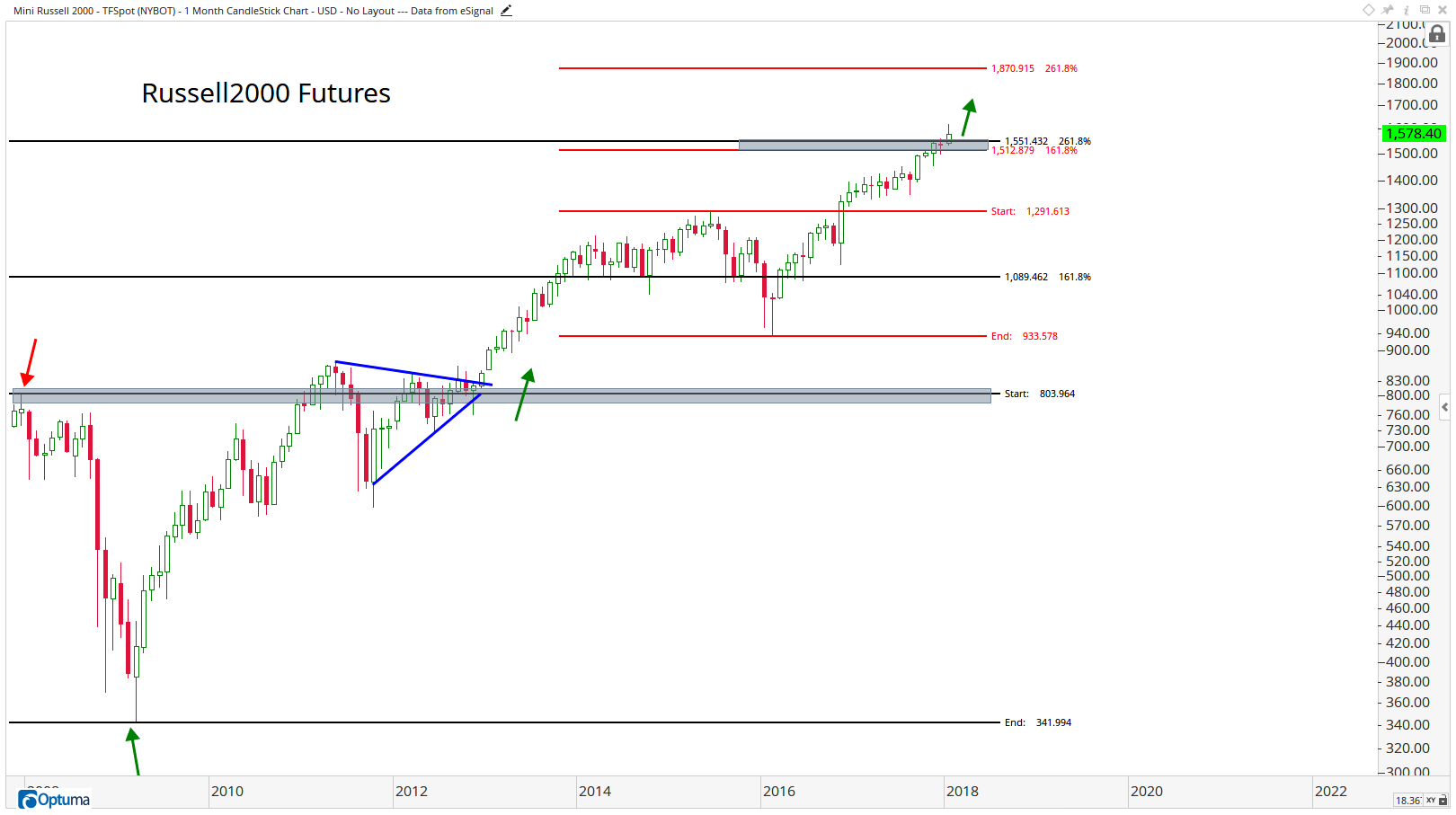 And finally from a broader perspective, the Russell3000 still has upside left to 1776 which has been our target since prices broke out above the 2015 highs. This index representing approximately 98% of all investable assets in the U.S. equities market has not disappointed and has been a wonderful expression of market strength since the beginning. We see no evidence that it won’t reach its upside objective:

J.P. Morgan doesn’t make all-time highs while the U.S. Stock Market is crashing. Pull up a 100 year old chart of $JPM and overlay the S&P500 over it and I challenge you to tell me which one is which. This has been a favorite long of ours since it broke out above 92 giving us a target above 136. I still think we get there. And if $JPM is heading higher, stocks as a group are likely to follow. 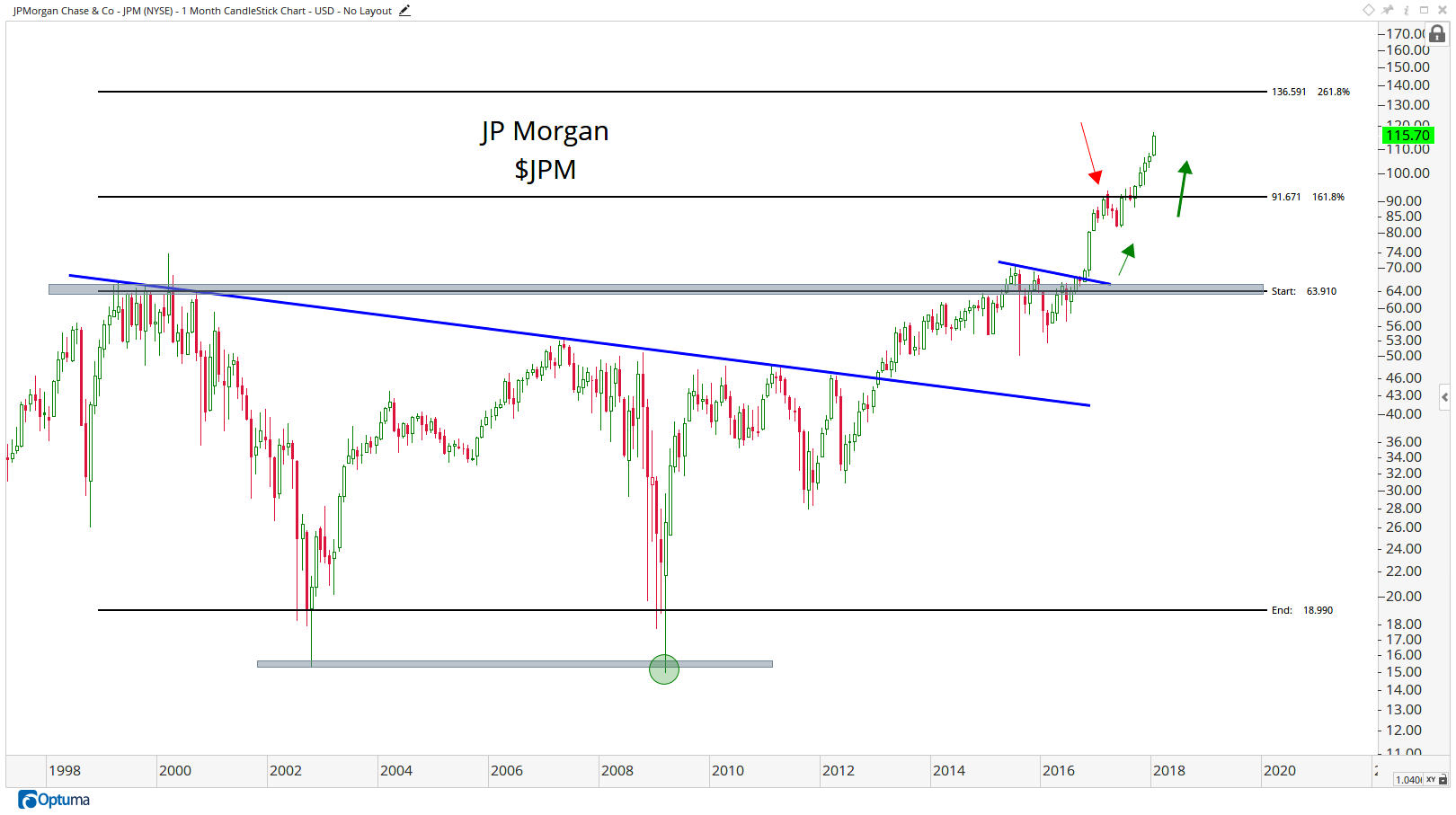 We had an upside target in Crude Oil of 62.50 for a long time, based on the former highs from a couple of years ago. This target was recently achieved and has now been exceeded. We only want to be long Crude Oil if we’re above that 62.50 level and I think we go to 76 and then 85: 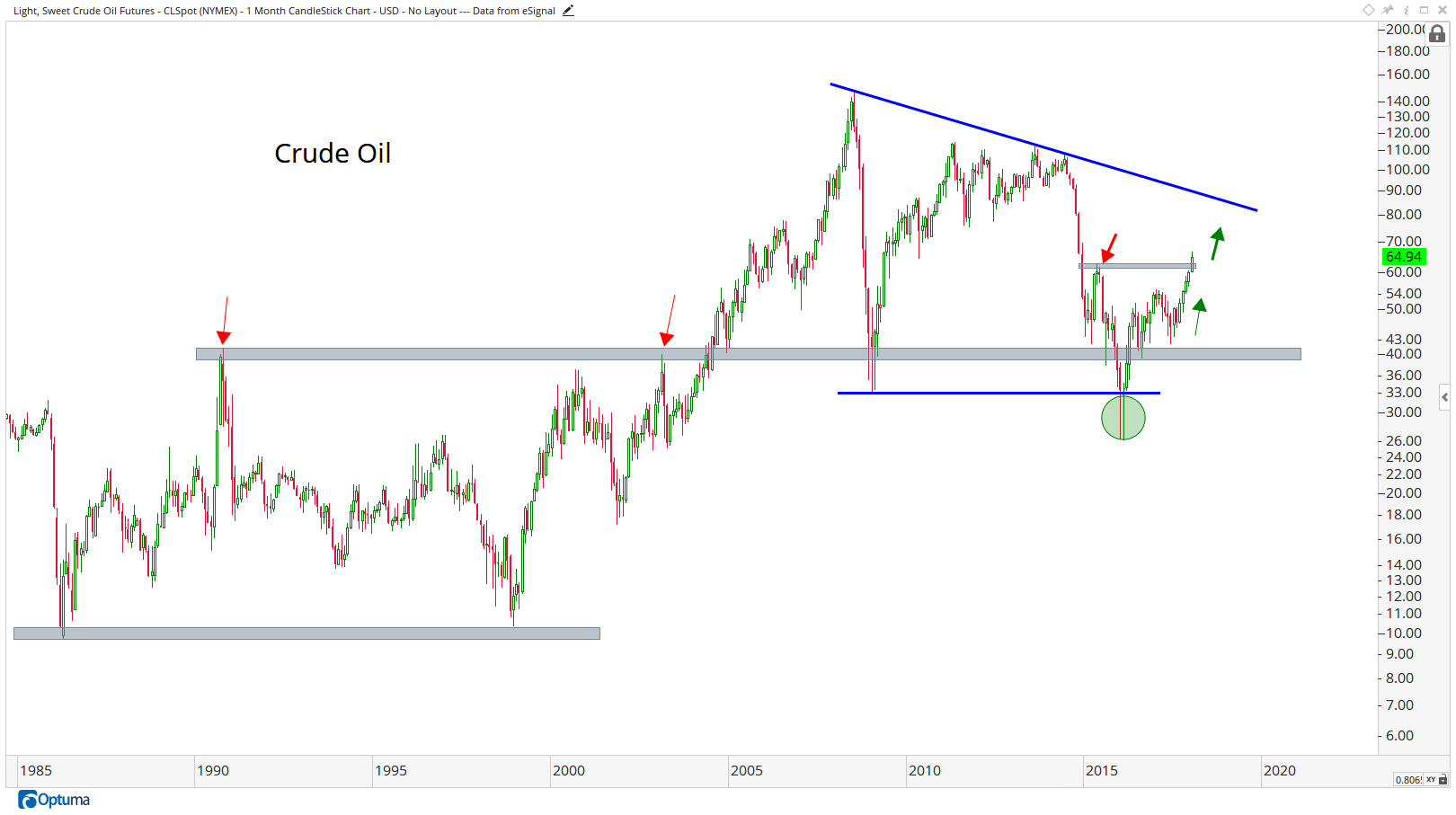 Gold closed above its downtrend line from the 2011 highs, finally. This is the first time it’s ever been able to do that. To me, it is further evidence that we want to be buying precious metals and precious metals stocks very aggressively. It’s not only part of my theme of strength of natural resources, but also a weaker dollar. If we’re above 1300 in Gold we want to remain long with a target above 1530: 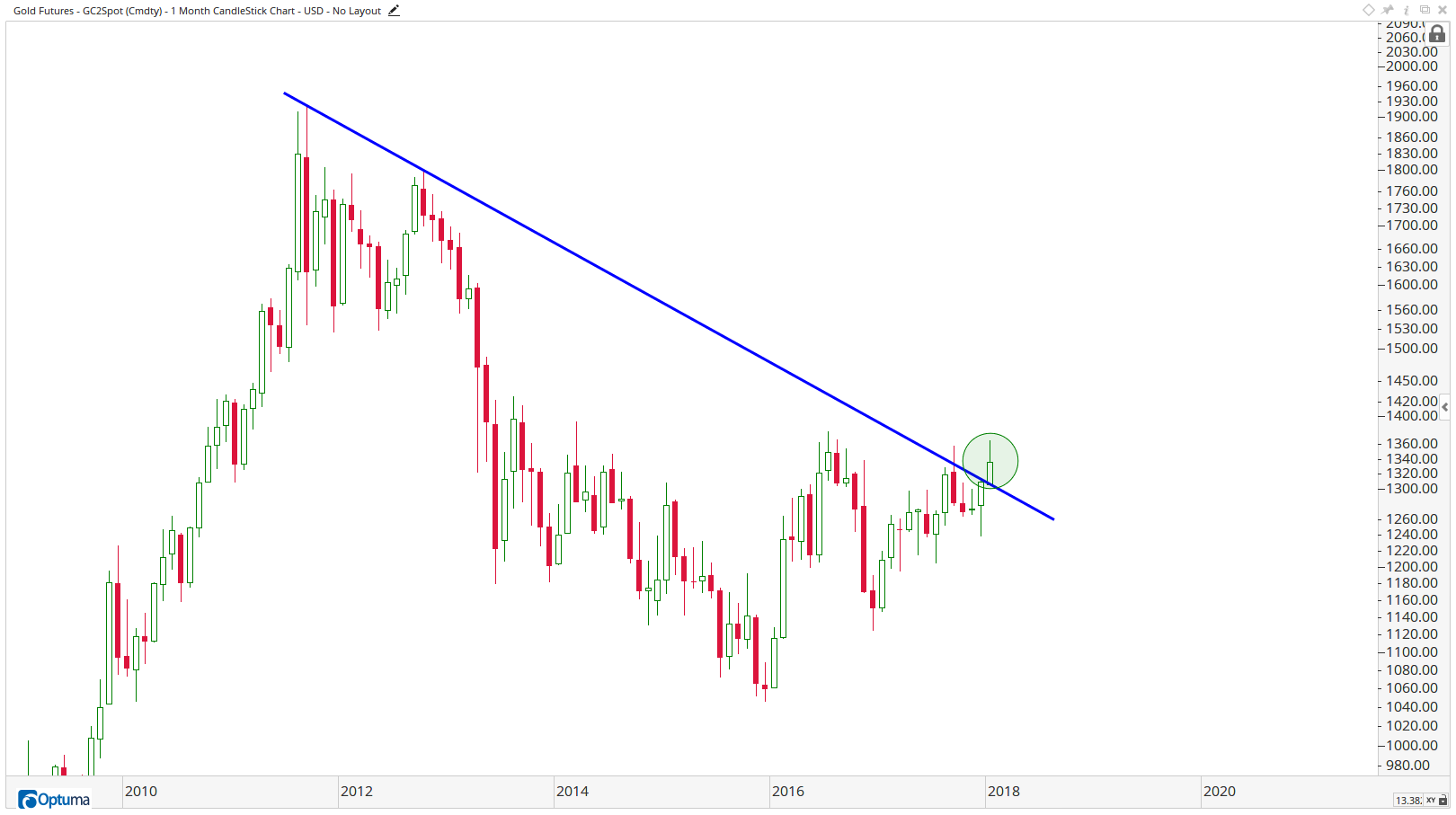 Here is that U.S. Dollar Index. This “should” have been a consolidation within an uptrend that broke out above 100 and went to 120. But it didn’t. Dollars broke down instead. That failure is a signal in and of itself. This is not a market we want to be buying. To the contrary, we want to be buying gold partly because of this Dollar weakness: 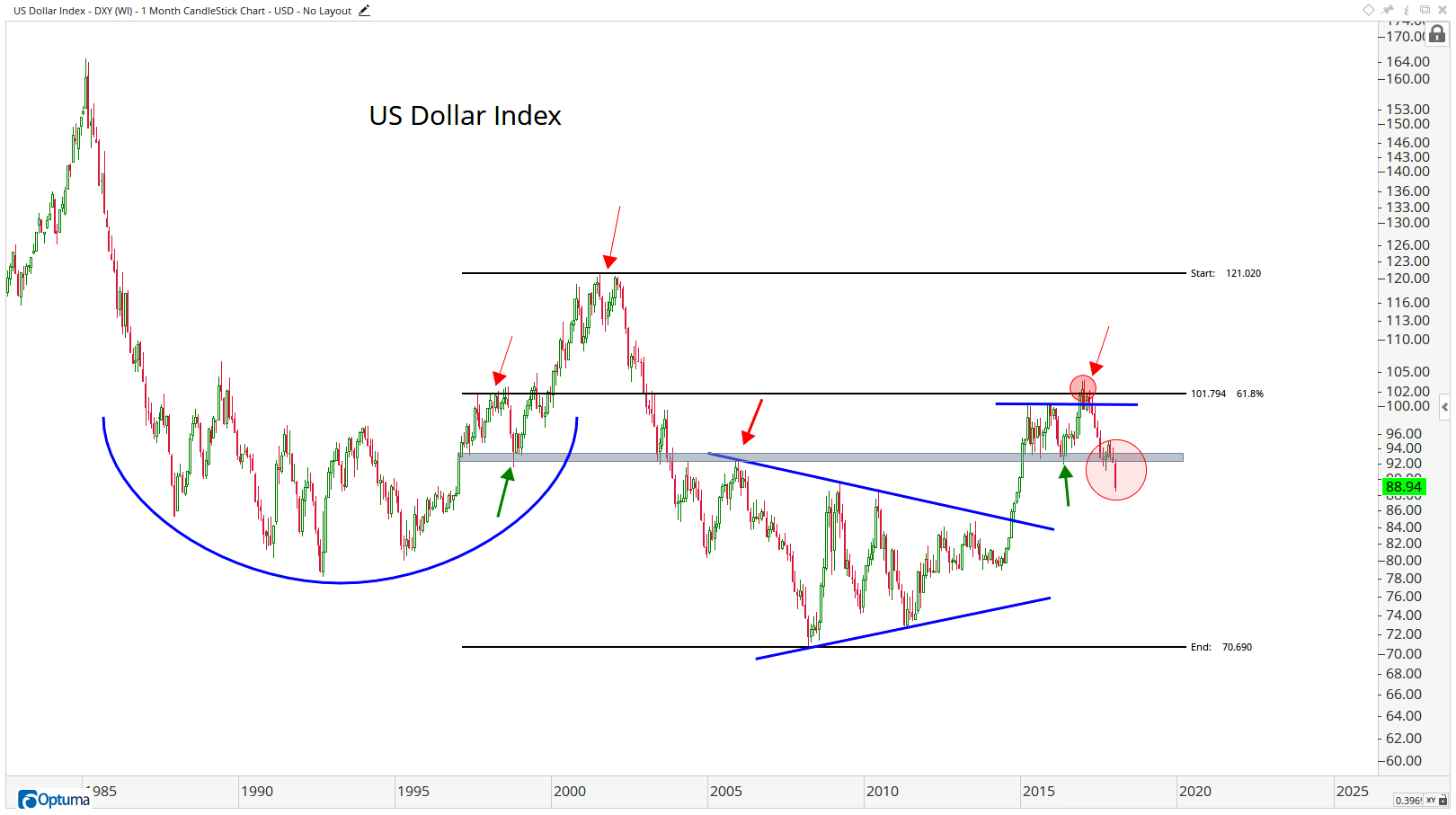 With interest rates, I thought it would add value to point out the aftermath of that outside month we pointed out last September. We have gone straight up since then in 10s and I still think we get above 3%: 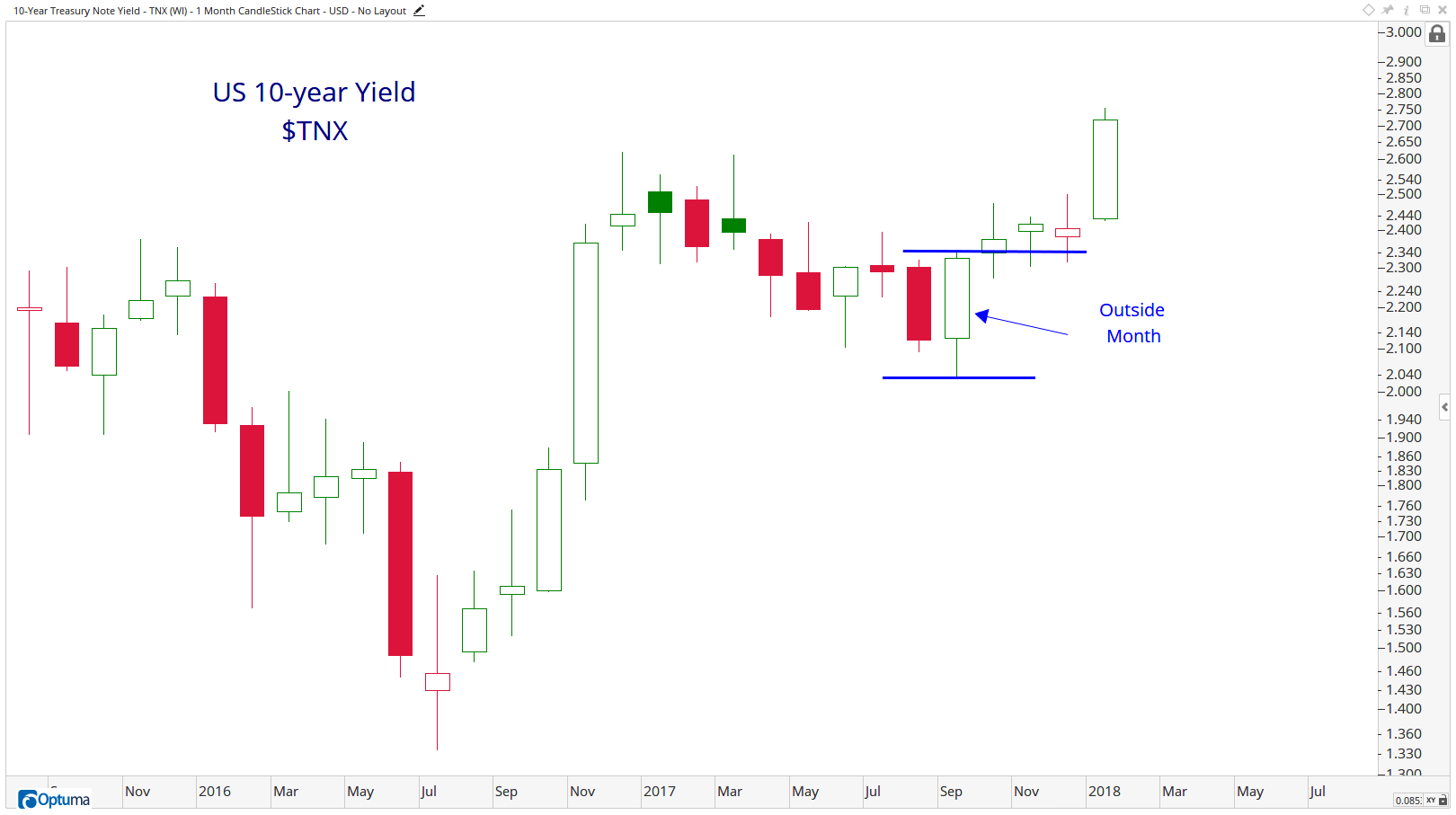 I have another 75 more of these Monthly charts and I encourage you to scroll through them once a month. Premium Members can check them all out here.

If you’re not already a Member of Allstarcharts, start a risk Free trial to access my entire Chartbook!