Over the past few weeks there have been some interesting developments in Agriculture commodities, and Soybean Oil is no exception.

Before we get into the price action, I think it’s worth noting that we’re in the middle of a seasonally strong period for Soybeans, while hedger positioning and public sentiment are coming off multi-year extremes. These should both continue to provide a tailwind for prices of Soybean related markets in the weeks and months ahead.

Structurally Soybean Oil has been in a downtrend since 2011, with selling accelerating after prices broke down from a symmetrical triangle in June of 2013. Prices have since been trending lower below the downtrend line from the 2012 highs, with prices breaking below long-term support near 30 in August of 2015. Momentum diverged positively at these new lows, and after a few months of consolidation, prices successfully reclaimed this support level to start the year. 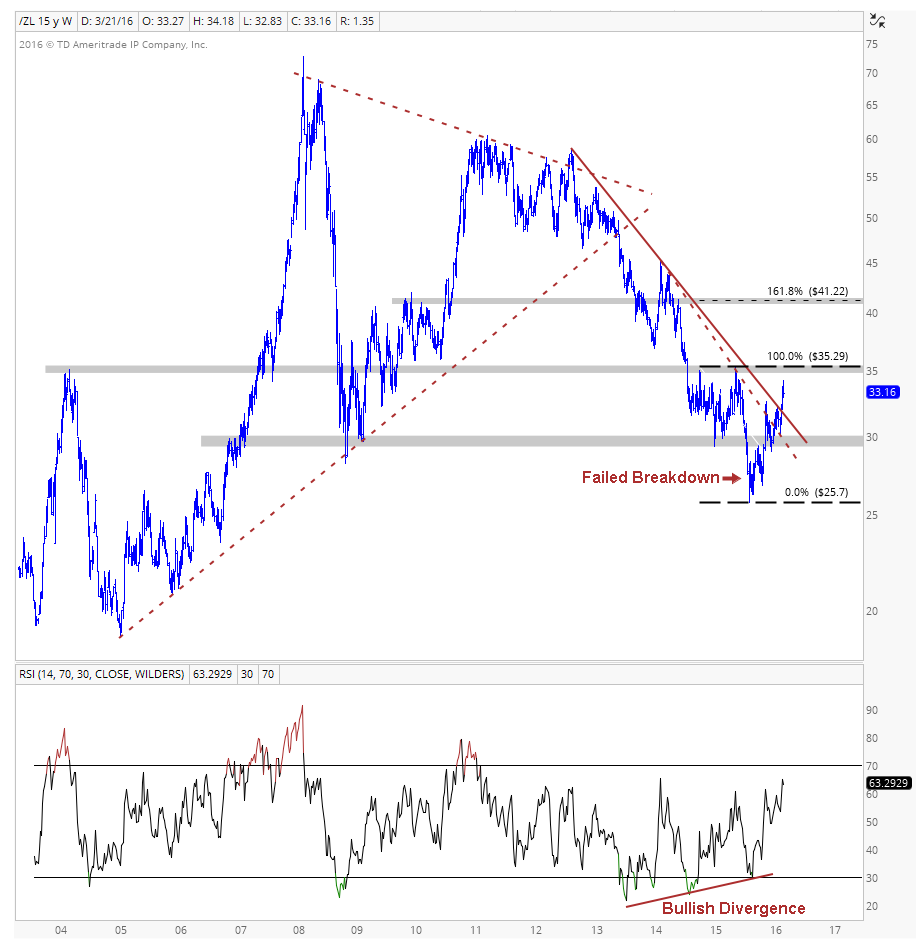 Prices subsequently followed through to the upside after confirming the failed breakdown and bullish divergence, and are now breaking above the downtrend line from the 2012 highs. The current weight of evidence suggests that as long as we’re above this trendline, it makes sense to approach this market from the long side. Structurally there is potential resistance at 35, but the main price objective of this breakout is near 41.25 based on the 161.8% extension of the June-August decline and prior resistance.

The daily chart provides a more tactical view of the multi-month bottoming process that’s nearing completion. Prices broke support at 29.50 last August, but quickly broke back above trendline resistance to reclaim it. This confirmed a failed breakdown and shifted momentum into a bullish range as it hit overbought conditions. 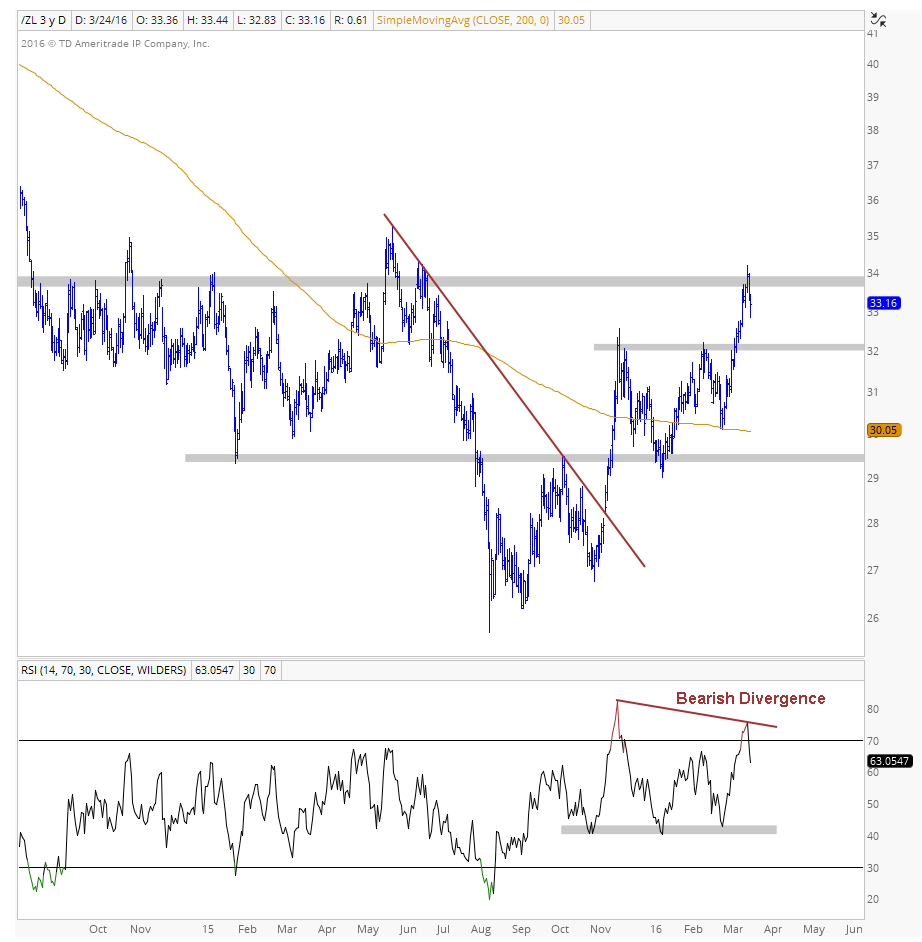 Prices are now testing resistance near 34, but will likely consolidate first to allow the 200 day moving average to begin rising, which should support higher prices. This pattern looks like an inverse head and shoulders with the neckline at 34. The measured move of this pattern would be 42, which corresponds well with the structural price target outlined on the weekly. In order for this breakout to be confirmed, prices need to close above 34.

Since Soybean Oil, Soybeans, and Soybean Meal are correlated, it’s no surprise to see them all acting constructively.

Soybeans have been in a downtrend since breaking the uptrend line from the 2006 lows in June of 2013. Prices have since been trending lower and broke below long-term support at 900-925 last August. Instead of prices accelerating lower on this break of support, they instead consolidated over the next several months as momentum diverged positively. If prices can close above this level to confirm the bullish momentum divergence and failed breakdown, it will likely be the start of a massive move higher. 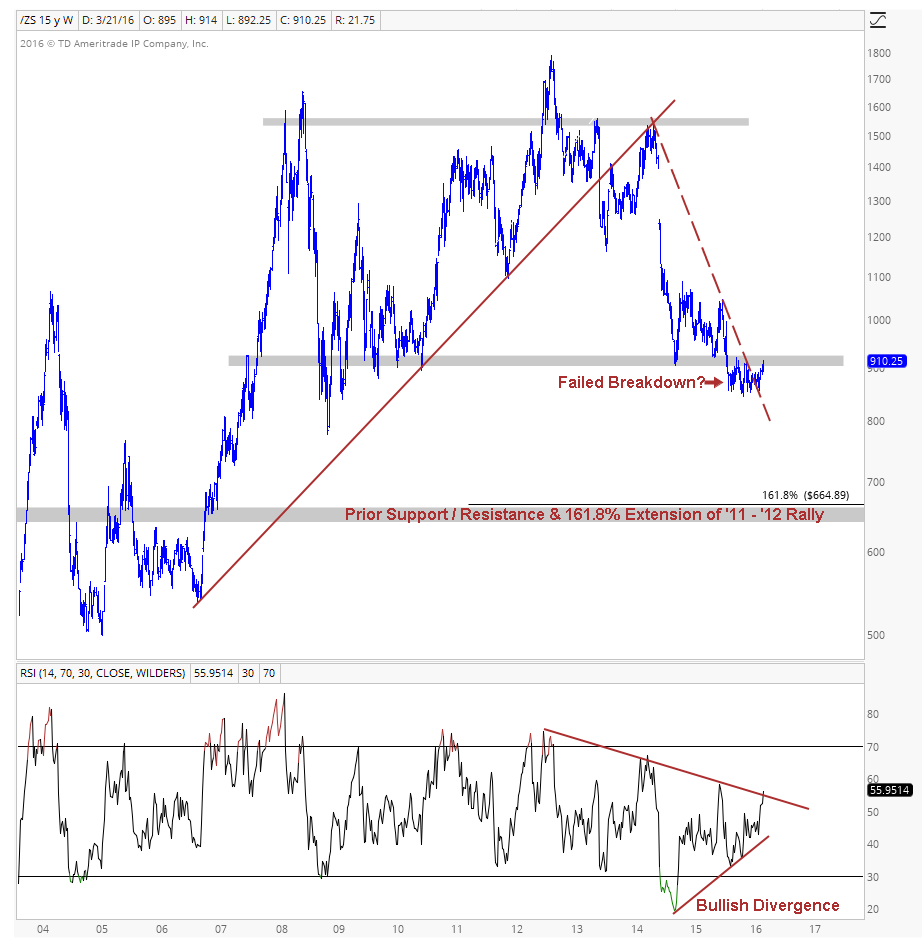 Soybean Meal has been the laggard of the group, but has recently put in a bullish divergence on multiple timeframes and is starting to gain traction to the upside. The levels are less well-defined here since we’re not near any clear potential support levels, but as long as prices are above the downtrend line from the July 2015, highs the bias remains to the upside. 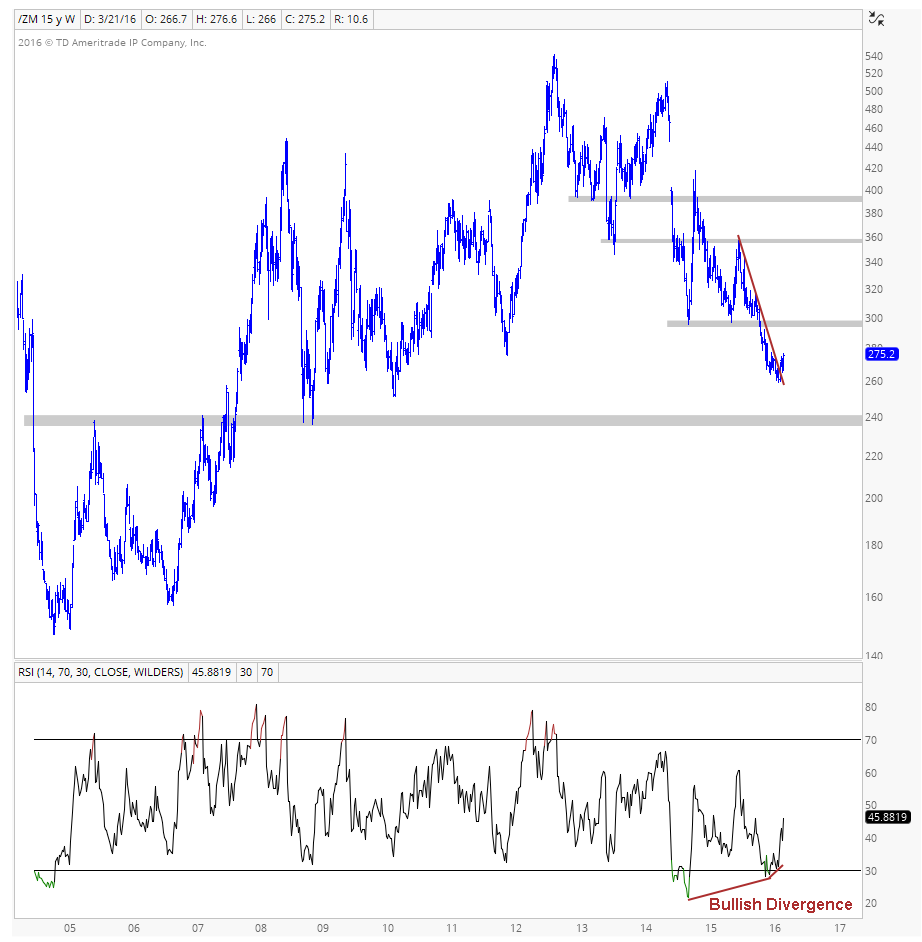 The Bottom Line: The breakouts and improvements in price action we’re seeing across these three Soybean related commodities adds to the weight of evidence that the recent strength in Agricultural commodities will likely continue.

Structurally the risk is well-defined on the long side in all of these markets and sentiment and seasonality should continue to provide tailwinds for higher prices. Whether you’re trading these commodities directly or are utilizing this information in your inter-market analysis, these developments are not ones to be ignored.

JC here – this is a major theme that continue to develop nicely. I’m not seeing much chatter out there in the media as they seem to be preoccupied with what the fed is doing andwhat the latest gossip surrounding trump might be. For us, who prefer to focus on trying to make money in the market, the ags are quietly breaking out to the upside and I think Bruni’s breakdown of the Soybean space is right on the money.

Members of Allstarcharts.com have full access to, not only hundreds of annotated charts with commentary, but also the conclusions based on the weight of the evidence. We offer a 30-Day Risk-Free Trial, so my suggestion is to give it a shot, and see if it’s for you. Click Here to start your 30-Day Risk-Free Trial Today!