The Dow Jones Industrial Average is now down 8 days in a row. The S&P500 is down 7 days in a row. Now is as good a time as any to check in with one of my favorite technicians Mary Ann Bartels of Bank of America. She does excellent work and I have heard her speak several times. In addition, she does not shy away from the media:

“The level of 1,250 is close to the index’s 2011 intraday low of 1,249.05 reached on March 16 and represents the “neckline of a potential six-month top,” according to Mary Ann Bartels, ranked third among analysts who study price charts in Institutional Investor’s 2010 survey. A drop below that level would send the S&P 500 to as low as 1,140, Bartels said.

The technical line in the sand is 1,250 on the S&P 500,” Bartels, New York-based head of technical and market analysis at Bank of America, wrote in a note yesterday. “A decisive loss of 1,250 would break uptrend support from March 2009.”

Here is what Mary Ann is describing in a chart that I put together on Stockcharts: 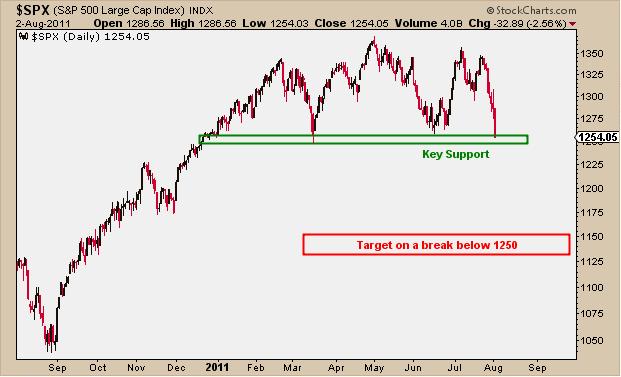 Since the beginning of this bull market in early 2009, all of these reversal patterns have failed causing all sorts of mayhem on the ensuing short squeezes higher. Could this time be different? Possibly. Mary Ann Bartels does a great job of keeping it simple with the levels. The line in the sand is clear. Manage risk properly and we should be fine either way.

Washington – you guys listening to this market??