One of our “Five Bull Market Barometers” is the Nifty 100/Nifty Small-Cap 100 ratio due to its importance as a measure of risk appetite.

Today, we want to look at a more concentrated version of this ratio, the Nifty 50/Nifty Small-Cap 100, which is a major inflection point.

Let’s discuss what’s happening and why it’s important to our broader view on Equities as an asset class.

As we stated in the intro, the Nifty 50/Small-Cap 100 ratio is at a critical juncture. In March it broke out to new all-time highs, eclipsing its peaks from 2004/2013, and has been consolidating above that level since.

Given the primary trend is up, this consolidation should resolve itself higher, but the real signal could come if this consolidation resolves to the downside instead. We know that “failed moves”, tend to lead to fast moves in the opposite direction…which would mean outperformance from “riskier” Small-Cap stocks if prices fall below their 2004 highs.

For those of you not familiar with how to read ratio charts or how to interpret this chart’s importance as a measure of risk appetite, let’s review.

First off, a relative strength (or ratio) chart is simply a visual representation of one asset’s performance relative to another. This can be an index, an individual stock, a commodity, a currency, etc. etc. In this case, we’re comparing the performance of the Nifty 50 Large-Cap Index vs. the Nifty Small-Cap 100 Index.

So why is this important? Well, it’s a measure of risk appetite among market participants. The large institutions that drive the market are primarily long-only mutual funds, pension funds, etc. that have a mandate to own stocks at all times. They can’t have their portfolio sitting in cash or put on short exposure like individuals or hedge funds can, so they have to figure out another way to express their bullish/bearish thesis in the market than adjusting the gross/net exposure of their portfolios.

As a result, when they’re optimistic about the future we’ll see them adding money aggressively to Small-Cap stocks because they’re riskier and should provide a higher potential return if their optimistic outlook for growth/equities/other risk assets is correct. In other words, Small-Cap stocks will outperform when the institutions that drive the market are optimistic and more willing to take risk.

The environment we’ve had since January 2018 has been the exact opposite. Institutions have been pessimistic about the future, so instead of buying the riskier Small and Mid-Cap stocks, they’re buying Large-Cap stocks. Companies/stocks that are more likely to be around no matter what the environment is. And as a result, we see money continually flowing into the largest and hypothetically “lower risk” stocks.

In other words, Large-Cap stocks will outperform when the institutions that drive the market are pessimistic and less willing to take risk.

If you want to see this in action for yourself, pull up a chart of the Nifty 50 and look at its absolute performance following the peaks in the Nifty 50/Nifty Small-Cap 100 ratio in March 2004, March 2009, and August 2013. Major bull runs took place following those periods.

While it’s not a foolproof signal in and of itself, it’s an important piece of data in our weight of the evidence approach and should not be taken lightly. Remember, these are not trends that are changing on a day to day basis. They’re driven by massive institutions allocating billions of Rupees to the market slowly over time. They take time to reverse course, but we appear to be at a potential inflection point.

The last point we want to make is that this ratio is not only a great measure of risk appetite, but it is useful as a breadth measurement as well.

The Large-Cap Nifty 50 is a very concentrated index, with the largest 10 holdings making up more than 60% of the index’s weighting. Its sector exposure is also highly concentrated, with Financial Services, IT, Consumer Goods, and Oil & Gas comprising nearly 80% of the weighting, leaving little room for other industries to be represented. 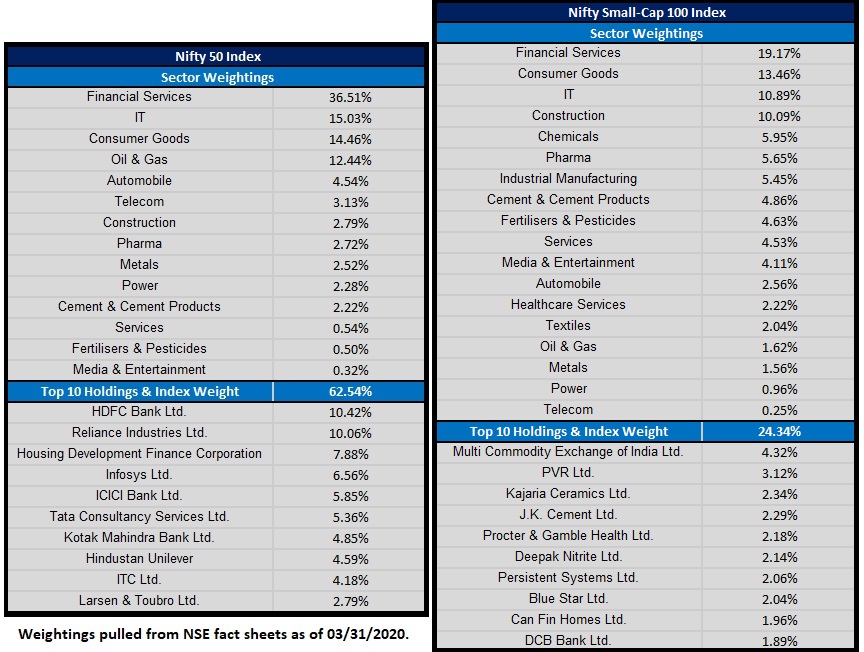 The Nifty Small-Cap 100 is far from perfect but is significantly more diversified than the Large-Cap index. Besides the obvious characteristic of having 100 stocks as compared to 50,  its 10 largest components only make up 25% of the index’s weighting and the industry representation is far more diverse. Construction, Chemicals, Pharma, and other important industry groups have a significantly higher impact on the index’s performance.

So not only would a downside resolution in the Nifty 50/Nifty Small-Cap 100 ratio signal improving risk appetite among the most important market participants, but it will also, by definition, signal a broadening out of participation in the stock market.

Weak breadth has been a problem since early 2018 and if we’re going to see this ratio peak and a major bull run in stocks develop, we need to see more stocks participating to the upside. The last few weeks have been a good start, but we need to see continued improvement over many weeks, months, and quarters.

We hope that helps explain why we continue to watch this relationship so closely, particularly as the major indexes approach potential resistance zones after a strong rally off their March lows. Regardless of which direction this ratio heads, it’ll provide valuable insight into what lies ahead.