This has been something that I’ve been somewhat obsessing over in the last week. Thursday night during and after my presentation at Duke University, one of the things the students were most interested in was my Corn trade. One of the kids was fascinated that I was buying Corn and not talking about Tesla or Twitter or any of these other “hot topics” that have been in the news lately. Phil Pearlman and I first went over this trade during our weekend video last weekend. But I wanted to go over some of the details in a separate post and follow up on some of the things we discussed.

What first caught my attention was the hate that Corn has been getting lately. We haven’t seen this much pessimism in the Corn market since back in 2009. This detestation of Corn by the investing public came just before a 150% rally in Corn prices. Here is the current public opinion chart of the corn market that consists of a basket of our favorite polls: Bloomberg, Market Vane, Consensus Inc, Ned Davis, etc. The colored lines represent 1.5 standard deviations above and below a 1-year moving average:

The next thing that got my attention was what the “smart money” and “dumb money” have been doing. The commercial hedgers have been loading the boat as corn prices have fallen, while the speculators are selling the heck out of it. I like to be on the side of the commercials: 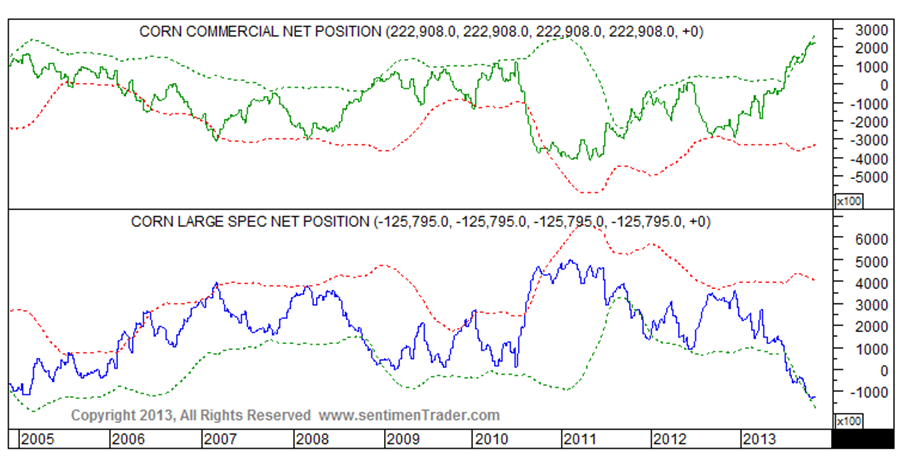 Finally, the biggest (and really only) reason we initiated a Corn position last week was because after falling in price for a good year and half and losing 50% of its value in the meantime, Corn prices hit new multi-year lows on Friday morning. At noon the USDA came out with their crop report and announced that 2013 was the largest this nation has ever seen. And on what is theoretically the worst news for Corn in American history, prices rallied. Can’t keep ’em down on “bad news”? I’m in: 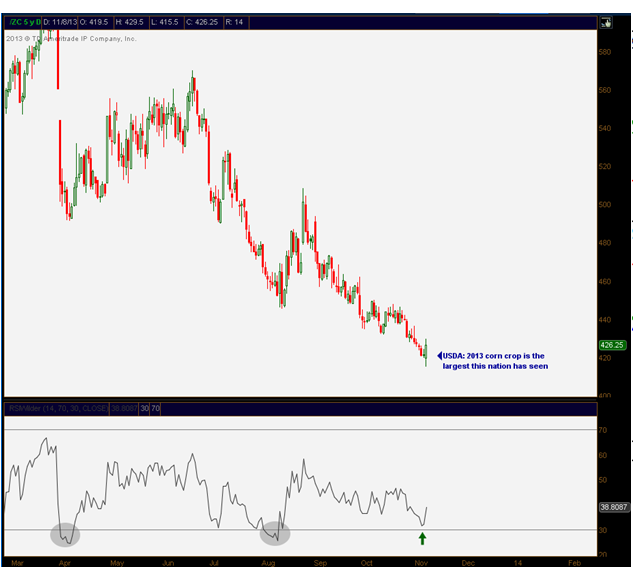 So that was last week. Now, one of the most important things we want to see after a big event day rally like that is follow through. And we got that on Monday. I was happy to see that. Now, like a nimble trader trying to protect gains, I sold Corn into that Monday strength as we ran into a declining 20 day moving average in futures. 5%+ in 8 hours or so is a good return in my book. But this trade is just getting started (if we’re right), so it’s all about reentering at a good price. I did that yesterday. I love the slow quiet grind lower for a few days to set up for a bigger move higher. I’m pretty sure that’s what is setting up as I write this post.

Take a look at the up-to-date chart of Corn futures. Look at the Friday reversal with a nice bullish divergence in RSI. Notice the follow-through on Monday and subsequent 3 day correction this week. We can use last Friday’s lows as a stop, or this week’s lows (thursday) if we want to be even tighter. I suppose it all depends on your time frame and objectives. But the real key for this trade, I think, is for prices to take out Monday’s highs. If we can see higher highs, that’s probably the trigger to put on a real position. Until then, we’ll stay relatively small and let it prove itself. 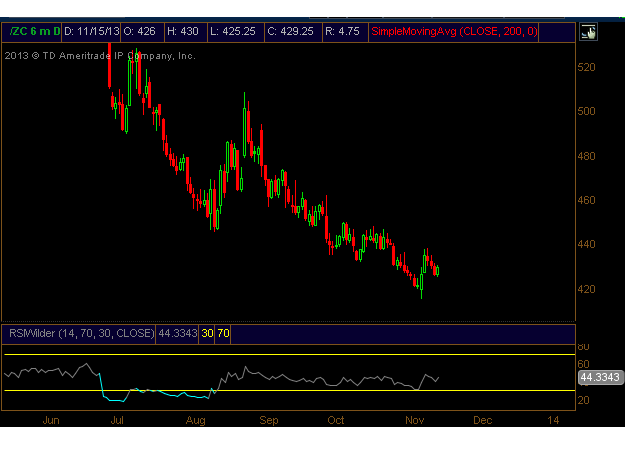 No correlation here with S&Ps folks. This one is on its own. I love that. Yellen can’t screw this one up for me. Only I can…..