Legend has it that the Japanese used technical analysis to trade rice as early as the 17th century. Although Charlie Dow didn’t come around until 1900 or so, a lot of the main principles were similar:

Steve Nison is the man when it comes to Candlestick charting. If you’ve never read his books, do yourself a favor and go read them immediately. According to Nison, candlesticks first appeared sometime around 1850. Much of the credit is given to a rice trader named Homma from the town of Sakata.

I use candlesticks religiously because visually we get the most information about a specific period of trading (daily, weekly, monthly, etc). Sometimes when I look at ratio charts, or if I simply want to eliminate some of the noise in a chart, I’ll look at a line chart of closing prices. Here is a good example of that: S&P500 Tests Important Trendline (Oct 11, 2012).

The reason I bring up candles today is not to go over their history, although it is pretty interesting. It seems like more frequently lately I’ve been getting asked about what the difference is between hollow candles and filled ones. Why is one color different than the other? As it turns out, I walk by fellow market participants’ trading screens and see that their candlestick settings are all off. Their charts aren’t providing them with the information that they’re looking for. And right on cue, Arthur Hill from Stockcharts.com puts out a post explaining this perfectly: 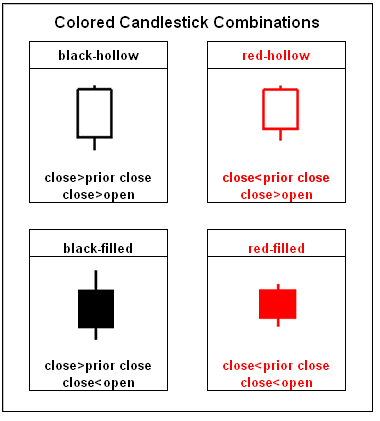 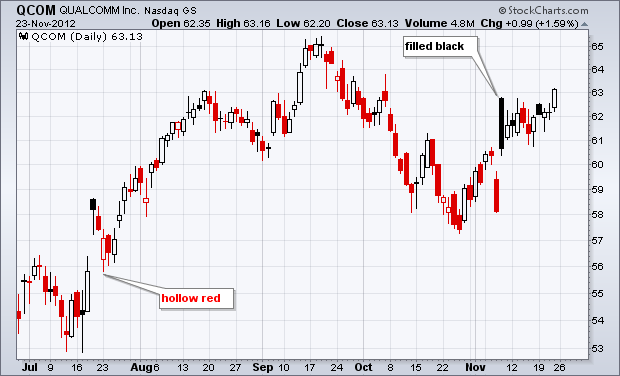 On my charts, I replace the color black with green. The information is the same, but since I use black backgrounds in my day-to-day charting, green just works better. Also, recognize the fact that Arthur hill uses this information for daily charts, but they can also be used across all time frames.

Check your settings in whichever charting software you’re using and make sure that your candles are giving you as much information as possible. These little guys tell a story. It’s important to listen.

What is the Deal with these Colored, Filled, and Hollow Candles (Stockcharts)