Earlier in the week, we held our July Monthly Conference Call, which Premium Members can access and rewatch here.

If you watched last night’s call you’re already sick and tired of hearing the words “overhead supply” from JC. But, we’re not sorry… Whenever we feel as though we’re being obnoxious about a theme or topic, we usually find out with hindsight that the very feeling itself is good information that we were right to be obnoxious about it! In other words, it’s usually because it’s a very important theme. And that’s exactly how we feel about the fact that more and more risk assets around the globe are running into logical levels of resistance these days.

And in recent weeks, we’re starting to see more and more of them correct through price, as opposed to time – which had been the case for most up until now. Europe has risen to the forefront as a shining example of this theme. We’re seeing it EVERYWHERE – from their largest and most important economy over in Germany to far less developed countries such as Norway.

It’s hard to fit more than four charts in a slide, otherwise, we’d keep going. JC covered plenty more in the call but this one does a fine job at getting the point across. We’re not only seeing it in Europe, it’s happening all over the world. And it’s not just taking place in equity markets, but plenty of key commodities like Copper are also in holding patterns beneath former highs.

The takeaway here is simple: Until these charts reclaim their key levels, we’re probably looking at a sideways market… at best.

2. The Advance/Decline Continues To Unwind

The volatility in recent days was very well advertised by divergences in both the NYSE and Nasdaq Composite A/D lines… as well as the stark deterioration in many other breadth measures.

Markets have some work to do and we’re going to need to see some serious expansion in participation fast in order to avoid further damage.

3. No Confirmation For New Highs

As mentioned above, the recent record highs in the large-cap averages have not been supported by much internal strength beneath the surface. And when we dig into it more, there’s really been a lack of confirmation in any way whatsoever. Momentum is diverging and either just barely achieved overbought, or not at all – as was the case the Dow at its latest highs.

Making matters worse, there has been no confirmation of these new highs from peer groups, or even on an intermarket basis. The chart below shows two intermarket risk appetite barometers, the Aussie/Yen and the High Beta vs Low Volatility ratio. 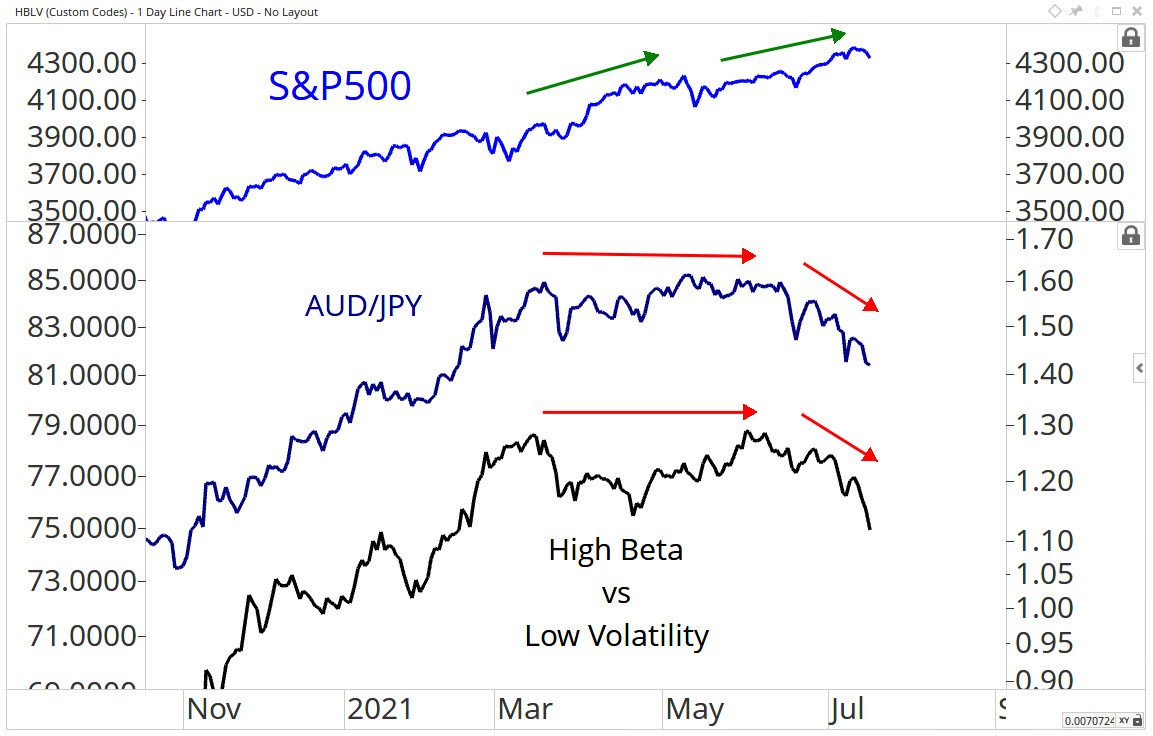 Both of these peaked over two months ago and have been trending steadily lower since. We believe it’s only a matter of time until the market catches down to these ratios. Although of course, they could always catch higher. But with the weight of the evidence the way it is now, that’s not the bet we’re making.

We’re in the camp that AUD/JPY and High Beta/Low Vol are the ones making the right call. Unlike these charts, the S&P hasn’t made a series of lower highs and lower lows in about 15-months. If we see it follow these risk gauges to the downside it would be a very significant development for the bears. Only time will tell.

4. Looking For The Laggards To Lead Markets Lower

This chart of Regional Banks relative to the S&P 500 speaks to two major themes we’ve been focused on of late.

First and foremost, pretty much all of our intermarket indicators for interest rates have been suggesting a breakdown in yields for months now. Whether it be Copper vs Gold, Tips vs Treasuries, or the chart below, most of them peaked months ago and have been trending lower ever since.

Once again, it was worth paying attention to them all as the US 10-Year Yield finally violated its key 1.40% level this month and collapsed lower yesterday to kick off the week. 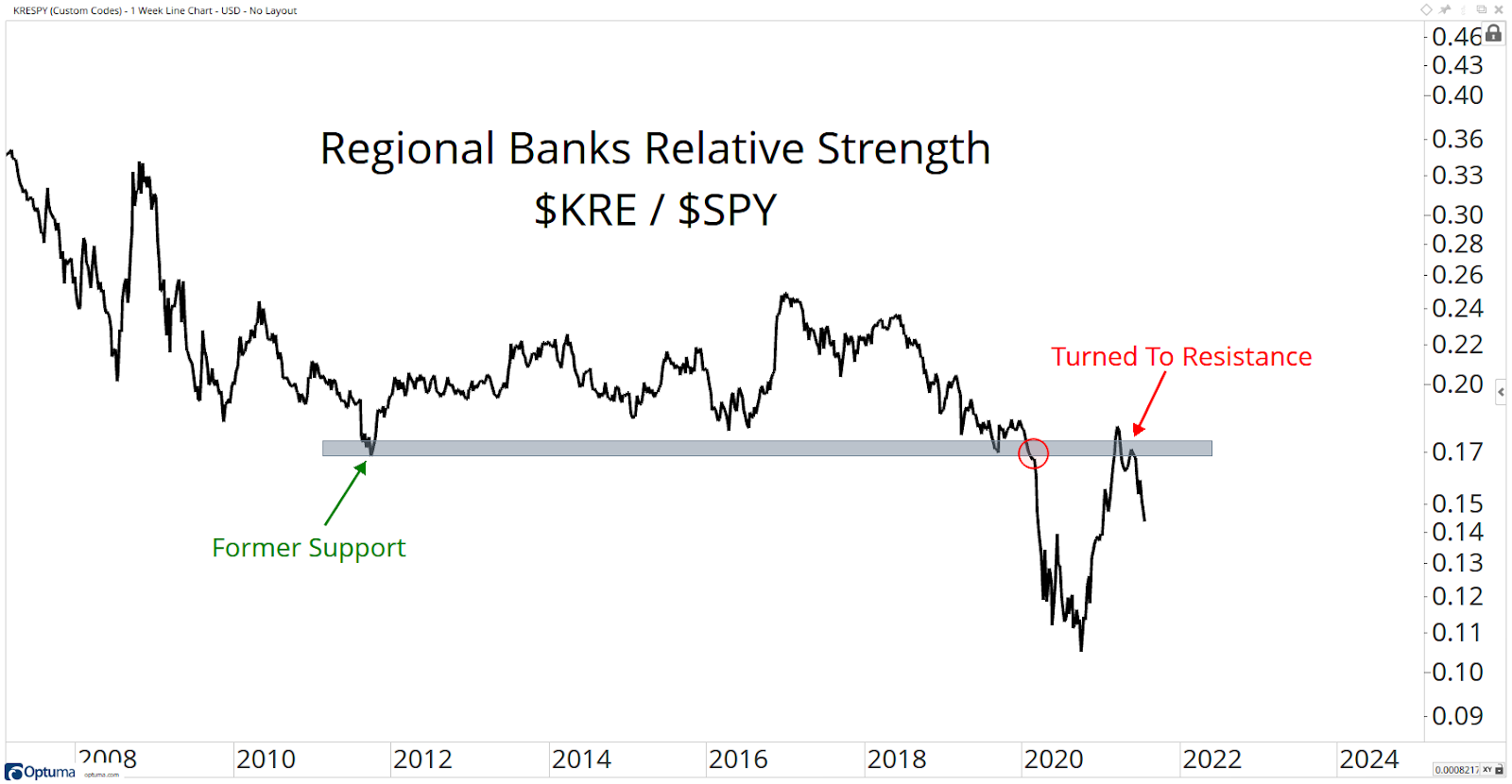 The second point that this chart hits on is that we should be watching the laggards extra closely right now as they should be the first to crack and show signs of a market top. Whether it be the value-oriented sectors, or SMIDs, we want to watch these areas as a leading indicator for broader market weakness. We think 212 in IWM is a good level to pay attention to right now. If we’re below there, expect the large-cap leaders to follow lower as well.

To determine just how low they can go, we’ll have to weigh the new data as it comes in. But for now, the S&P appears to be repairing much of yesterday’s damage and is still just points off all-time highs. So, before we even think about secondary support levels, we need to see some actual weakness at the index level.

We’ve been feeding the ducks and reducing our equity exposure for months. Cash, patience, and discipline has been the best course of action, and we see no signs of this changing for now.

Although, one area that is trending and offering opportunities on the long side right now is in US Treasury Bonds. Not only are Treasuries breaking higher on an absolute basis, but making us even more confident in our long bonds position is the fact that they’re also at a perfectly logical level to reverse course and start outperforming the stock market. 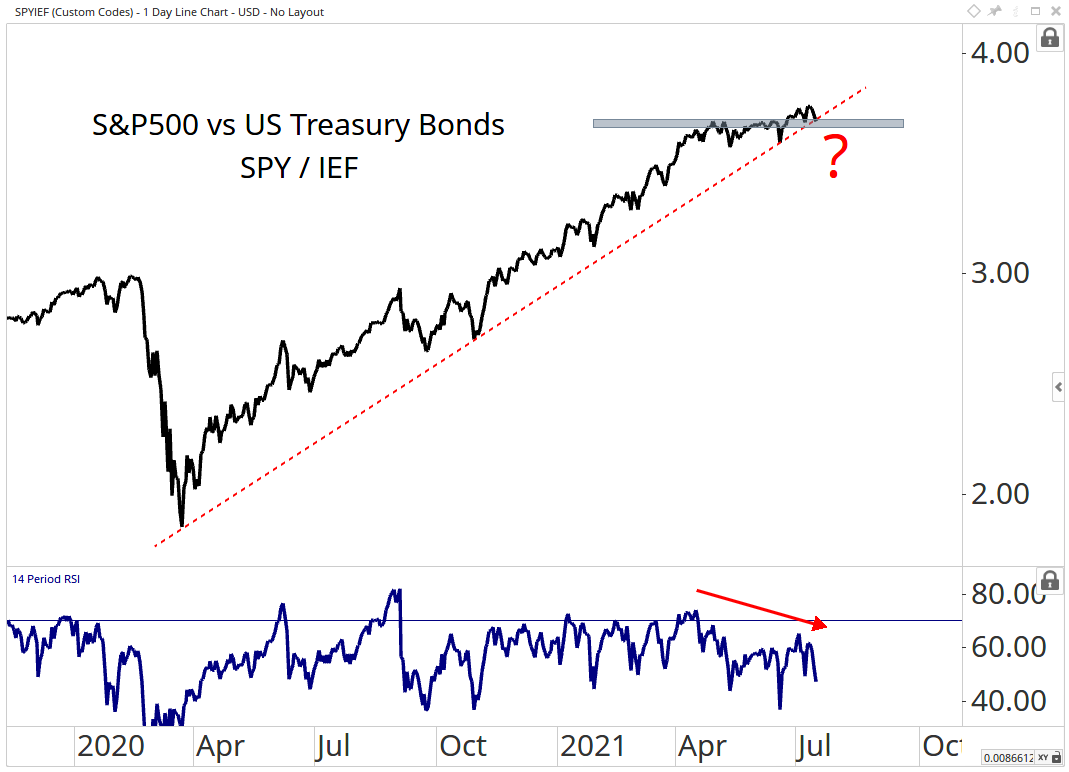 We’ve seen this before (think January of last year), and believe Treasuries are a good place to park some of our cash pile right now as investors are embracing defensive assets and safe-haven currencies at an increasing rate.

When this messy market clears up, we still think the primary trend will resume higher at which point there will be plenty of opportunities in stocks that are trending. But we’re just not there yet. So until we are, we want less exposure to stocks and commodities and more exposure to cash and bonds. It’s already worked for months, and now with conditions becoming more volatile, it’s likely to work even better.

If you are not a member but enjoyed this post, click here for a risk-free 30-day trial so you can watch the full Conference Call!

We hope you enjoyed our recap of this month’s call. Thanks for reading, and please let us know if you have any questions!