From the Desk of Steve Strazza @Sstrazza

In this post, we’ll do our best to summarize it by highlighting five of the most important charts and/or themes we covered, along with commentary on each

It’s not a typo. Allow me to explain. While the broader averages did not make their ultimate cycle lows until the fall of last year, market internals bottomed all the way back in May and June.

In the lower pane of the above chart, we’re measuring market internals using the percentage of new 52-week lows made by components of the Russell 3000. As the index comprises roughly 97% of the investable US equity market, we’re confident that this gives us an excellent representation of the broader market.

While there is still work to do before we can have conviction that a new, sustainable uptrend is underway,  we have all the information we need to call a bottom for the overall market. In fact, this is old news. The major averages and the market of stocks beneath the surface continue to show progress as the bottoming process plays out. We are best served looking for stocks to buy, not sell, in this environment.

2. Nothing But Green on the Screen

If stocks truly bottomed back in the spring or summer of last year, then they must have moved higher in the time since. They have. Here is a look at sector performance since market internals troughed last year. 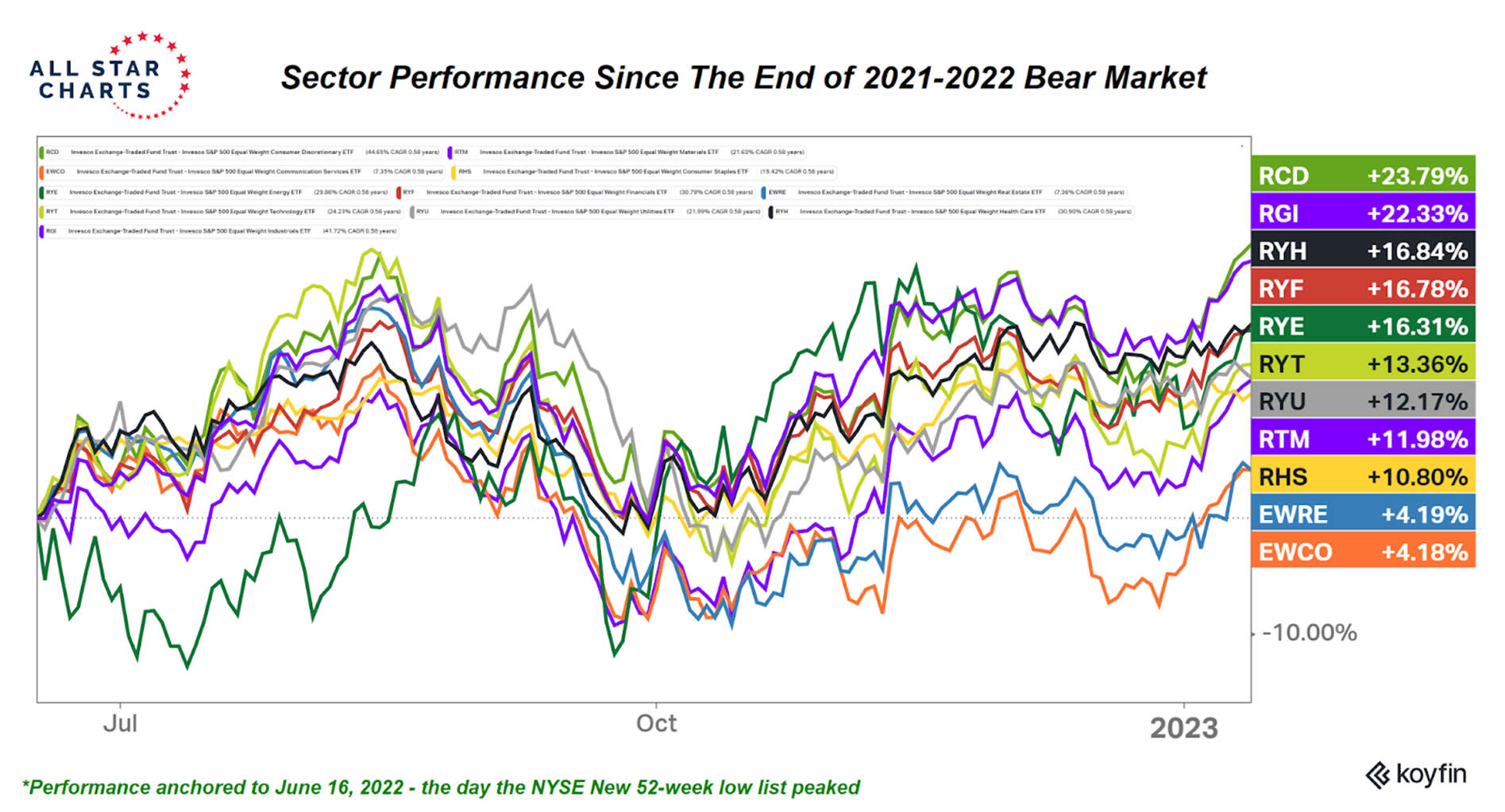 We’ve used equal-weight sector indexes instead of cap-weighted sector indexes to illustrate this point as they give us a more comprehensive view of what is taking place beneath the surface.

Over the trailing seven months, every single sector is positive. Stocks are moving higher, regardless of what group they fall into. When we look at the leaders, it only reinforces our bullish thesis as procyclical and risk-on sectors like discretionary and industrials are performing the best.

3. No Dip Buyers for Dollars

A few months after the new 52-week lows list peaked on the Russell 3000, the US dollar index $DXY began to roll over. Since then, the dollar has fallen against the six components of the DXY as well as EM and other G-10 currencies alike.

The triple pane chart of the DXY, our G-10 Currency Index, and our US dollar advance-decline line showcase the broad dollar weakness:

As long as the G-10 index and our USD A/D line continue to move lower and to the right, it’s hard to imagine the DXY will catch a bid. For now, buyers aren’t stepping in, regardless of potential support levels.

The evidence suggests USD will continue to fall, and risk assets around the globe will reap the rewards.

Although the Discretionary Sector SPDR (XLY) has been one of the worst-performing indexes during the current cycle, these stocks refuse to break down.

Price violated a shelf of year-to-date lows in late December, but buyers successfully repaired the damage and reclaimed this critical level of former support, resulting in a major failed breakdown. 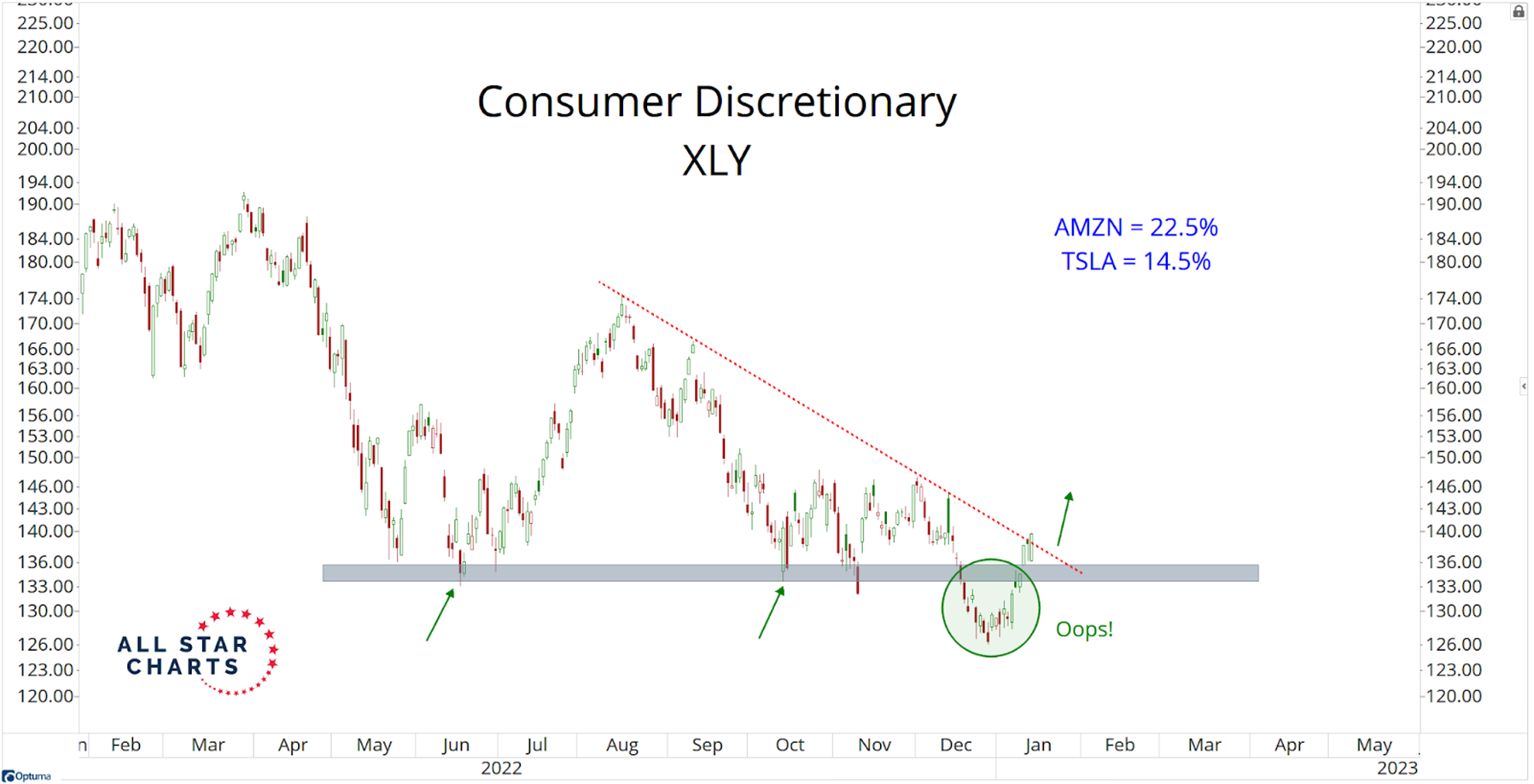 Seeing these stocks hook higher is another sign of risk appetite increasing in the stock market. It can only be seen as bullish that the laggards of the current cycle have stopped falling.

With that said, bulls want to see some upside follow-through in the near-term to confirm that a tradeable low is in.

Not only are we seeing the worst-performing sectors refuse to make new lows, but there is also evidence of healthy risk appetite in the relative trends.

As you can see, staples have shown steady leadership for over a year now. This makes sense considering the bear market that has been in place for stocks in the US and abroad. If the bear market were to continue its course, we’d expect this reversal pattern to resolve higher in favor of XLP.

However, we’re seeing the opposite as XLP/SPY failed to hold its new highs and fell back into its old range. A valid failed breakout in this ratio would make sense in an environment where equities are transitioning from a downtrend into a new uptrend.