Are you guys having fun yet? I tend to enjoy this sort of market environment where stocks go both up and down. This is what we like to call, “normal”. For us market participants that look at all asset classes, particularly currencies and commodities, we know that normal markets move in both directions. Long-term trends can be up and they can be down, while counter-trend moves lasting weeks or months are the norm. For some people that only look at U.S. Stocks, that concept may have been forgotten as the major U.S. averages trended mostly higher the past 6 years, although we did have some short-term corrections along the way.

The title of this post, “It’s the Yen Stupid” was inspired by James Carville during Clinton’s presidential campaign in the early 90s. He used Economy, not yen, but I think you get the point. As market participants, we’re not here worried about China, or Greece, or a rising rate environment (that one is hilarious by the way), we only care about what is happening between supply and demand. Searching far and wide for clever reasons as to “why” the market is doing what it’s doing just seems like a complete waste of time. Remember that Mr. Market has never paid a single person in human history for guessing “why”. We would rather focus on things like “What”, “When”, and “For How Long”.

Coming into the new year, everyone had an opinion on what might unravel the bull market in U.S. stocks. We’ve heard them all, so there’s no reason to drag that nonsense on. Chatting with buddies of mine that look at markets in a similar way that I do, I always brought up the fact that the Japanese Yen was approaching lows not seen since 2007, just before the U.S. Stock Market peaked. With such strong negative correlations between Yen and U.S. Stocks, I thought that if we found support in Yen near the 2007 lows, it could present a major problem. Well, here we are.

Market observers will point out that it’s not the Yen dragging the S&Ps, but more so the S&P500 volatility causing unwinds in the Yen carry where short sellers of Yen now have to buy it back as they liquidate their speculative positions in stocks and other risk assets. That may or may not be true, but does it even matter? Is it relevant which one sparks which? Or do we just care that they move inversely? I’m a fan of the latter, obviously.

Here is a weekly bar chart of USD/JPY which shows the Yen bottoming out in the Summer of 2007, just around the time that all of the major U.S. Stock Market Indexes were topping out. Remember, in this chart Yen is the denominator, so a top in USD/JPY represents a bottom in Yen. Notice the failed breakout in 2007 above the prior two peaks from the previous 18 months. Now look today at how eerily similar the failed breakout this Summer appears on the chart: 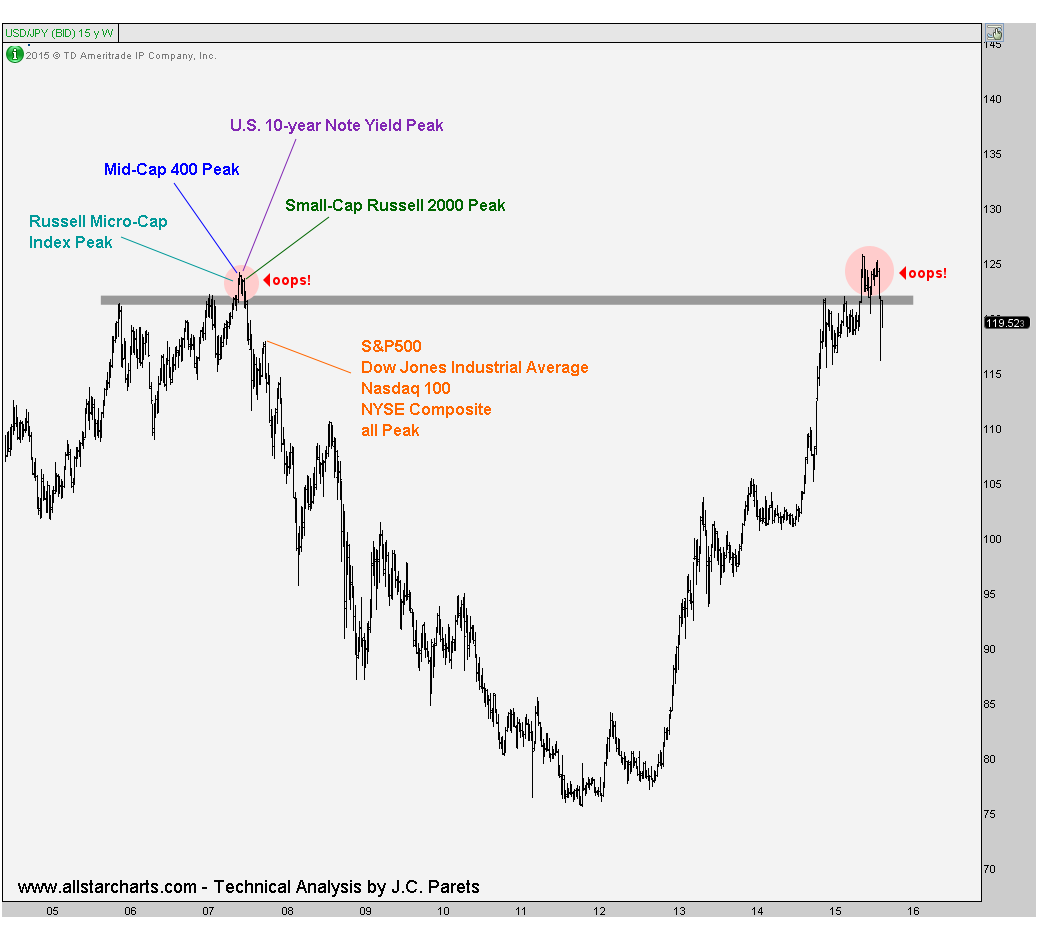 There is a very strong negative correlation between U.S. Stocks and Japanese Yen. In fact, the further back you go, the higher the negative correlation coefficient becomes between the S&P500 and the Japanese Currency. We’re looking at levels near or above -0.9 across the board going back a month, a year, 3 years, 5 years, etc.

Facts are facts, it’s just math. I would argue that further strength in Japanese Yen will continue to wreak havoc across U.S. stocks and evening specials about markets in turmoil are here to stay. For a lower volatility environment and a stronger stock market, we want to see USD/JPY getting and staying above 122. This was the level in 2007 and it is the level that we’re once again focused on today.