For the better part of 2021, we’ve been pounding the table about markets being a chop fest. And we’d seen little evidence suggesting this was likely to change any time soon–until this week, that is.

Trendless… range-bound… call it whatever you want, but the path of least resistance for stocks and many other risk assets has simply been sideways!

Alas, we’re seeing some strong bullish action this week that we simply can’t ignore. Let’s talk about it.

Before we get there, though, let’s take a step back and look at small- and micro-caps, as they provide great illustrations of this sloppy stock market story…

SMIDs and micros have not been able to make any real progress for most of the year.

Pretty much everything outside of the large-cap averages have been chopping around in a range since Q1. This had reinforced our view that these messy conditions were likely to persist for the foreseeable future. But there’s something brewing in mid-caps suggesting those days could be behind us.

Notice how, from the March lows last year into Q1 of this year, these guys had been the leadership groups: 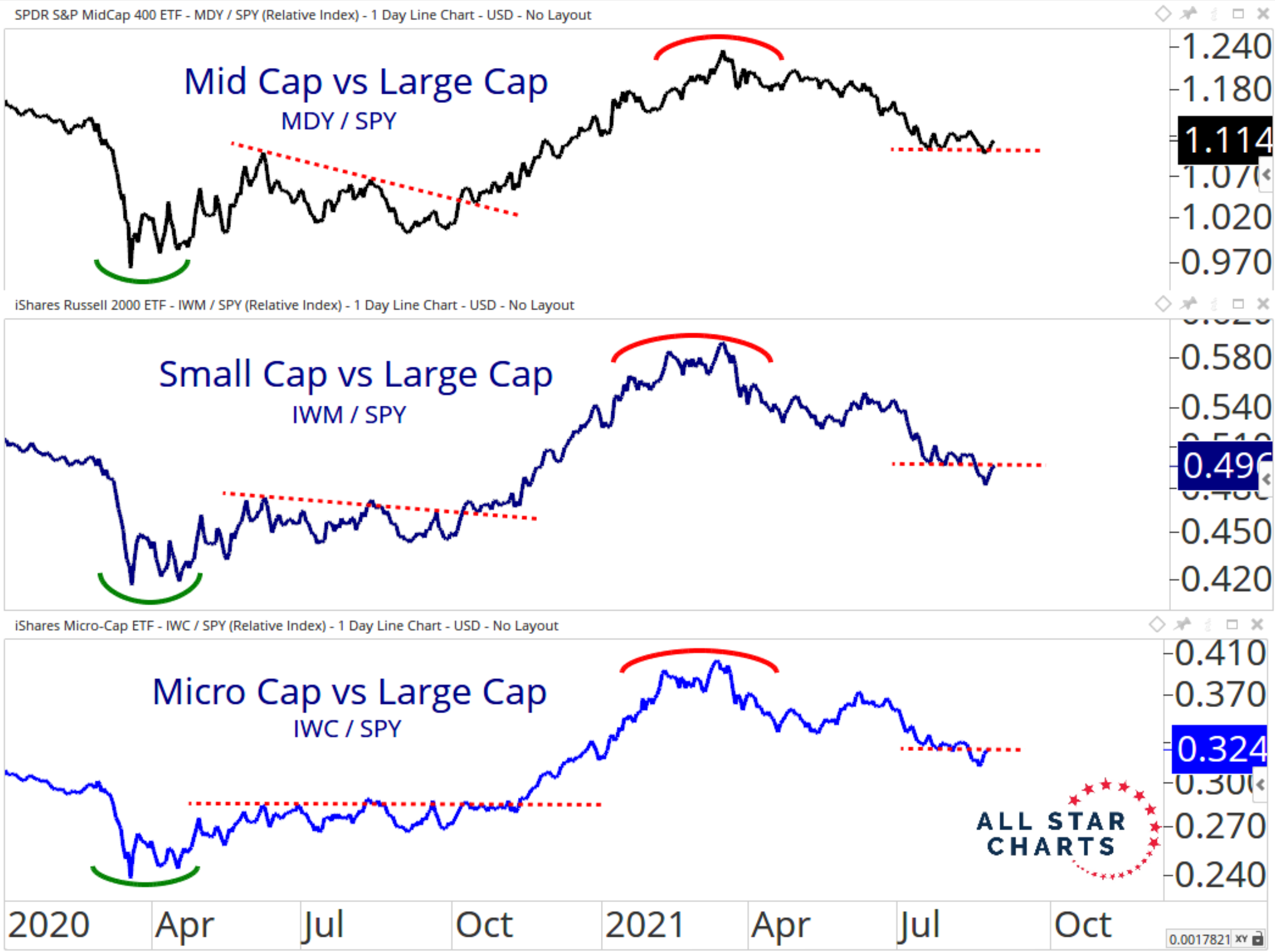 Another thing we’ve talked about recently is that, while everyone still seems to be looking for a “correction,” the truth is the majority of stocks have already corrected beneath the surface. So, maybe that was it…

Just look at the average drawdown for small-caps. Many people would actually say the average stock in the Russell 2000 is in a bear market (based on a 20% drawdown) right now!

The average small-cap is currently 24% off its highs. Meanwhile, the index is only in a 6% drawdown (as of Thursday, August 26).

And this is nothing new… it’s been this way for months. If someone tells you we need a correction, you can tell them we already had a correction.

What will it take for us to start erring in the direction that an upside resolution is likely to occur soon?

Just to be clear, it’s always been our thesis that stocks would more likely than not resolve higher, eventually, in the direction of the underlying trend. The harder question we’ve been asking ourselves is simply, “When?”

One thing that would certainly have us turn bullish is SMIDs breaking out of their year-to-date ranges.

In that environment, we’d expect them to at least stop going down on a relative basis.

Check out this chart of mid-caps that we shared earlier in the week in our RPP Report:

Mid-caps $MDY have been the most resilient group among smalls, mids, and micros during this corrective phase. For this reason, we should expect them to lead and make this move first if it’s going to happen.

And it looks like that’s exactly what we’re seeing right now! A tradable low is being carved out on a relative basis, while the S&P 400 looks poised to reclaim its all-time closing highs around 505 today.

Seeing mid-caps reassert some leadership while breaking out of their range on an absolute basis is a major development for the bulls and risk appetite.

Now we just need to see these failed moves in the small- and micro-cap ratios whip higher as well. If this breakout is the real deal, we’d expect it’s only a matter of time until the little guys follow suit and resolve higher as well.

In this environment, we’d also expect things like Emerging Markets and Yields to be above our risk levels. We’re watching these areas and others for confirmation of this newfound risk-on tone to markets.

We pointed out all the whipsaws we’ve seen play out in risk assets this week and mentioned that it could be the spark that leads to upside resolutions from some key charts we’ve been watching.

For now, that’s exactly the direction we appear to be headed. Failed moves and shakeouts have been occurring for months, so we still need to see this breakout in mid-caps materialize and be confirmed with follow-through. We should know a lot more by next week.

The bottom line is the evidence continues to come together and build on the side of the bulls. It’s time to pay very close attention. Things are happening!

And all of this just as summer comes to an end… how convenient is that?

Let us know what you think, and, as always, please reach out with any questions.