Since Spring of 2008, Gold has really been running the show in the world of Precious metals. Sure, Silver had its moment last year, but remember – that came crashing down rather quickly, especially on a relative basis. Today I want to take a look at a very simple setup that we’re seeing in Platinum.

To me, this is a standard reversion to the mean trade that is backed by momentum divergences that we can take back to 2008. This is a weekly chart of Platinum relative to Gold. We can see the 200-week moving average beginning to flatten out, and higher lows in the Relative Strength Index as prices made fresh lows: 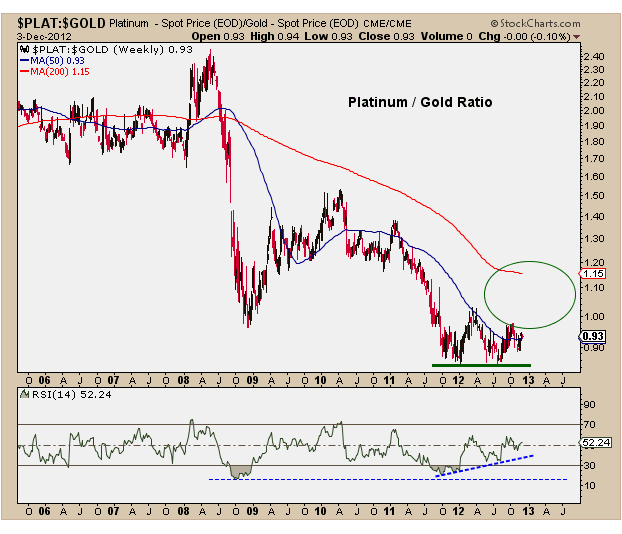 To be honest, this weekly chart of $PL_F / $GC_F reminds me a lot of the Silver daily chart that we were looking at this summer (see here). Granted that worked out very nicely, rallying 25%+ over the next month, so it’s a convenient comparison. But it looks the same to me. The silver setup was on a daily time frame and this one is on a weekly. The patterns are the same though.

Let’s see how it plays out. But I think we could see a similar reversion to the mean here targeting that flatting 200-week moving average. And like in Silver a few months ago, we could then see a continuation past that level.

From a risk management perspective, I’d like to see the price action remain above this (now) upward-sloping 50-week ma. As long as we can remain above there, it seem like a nice risk/reward. Momentum has really turned up hard telling us to at least pay attention. So I think we should.